Find all the need-to-know pre-match insight down below...

The Gas look to build on a successful week as Ryan Lowe's Plymouth Argyle come to town on Saturday. A vintage display against AFC Wimbledon and a well-fault victory over Leyton Orient in the week will have buoyed the confidence of the Rovers camp ahead of the weekend.

A brace-a-piece for Brandon Hanlan and Sam Nicholson will see the two in-form forwards looking to continue their scoring form when they return to the Mem tomorrow afternoon.

Check out our full breakdown on this weekend's fixture!

Paul Tisdale caught up with Geoff Twentyman ahead of this weekend's game, find an extended version of their pre-match catch-up below!

Speaking ahead of his side's shortest away trip of the season, Ryan Lowe touched on what he expects from the Gas when he spoke to www.pafc.co.uk.

"You get honesty from these types of players, these types of clubs (Rovers). They've got some good players. A new manager's come in and everything always steps up a little bit, they've just won to on the bounce so they'll be on a bit of a high but we respect the club and we have to go toe to toe with them."

Ryan Lowe's Plymouth side currently sit 15th in the league table, with a great start to their season bolstering their league standing as they look to consolidate in their return to League One. On 19 points, the Gas could move level with their opposition this weekend if they pick up all three points.

On a tough run as of late, Argyle haven't won in the league since the beginning of November, but have faced some tough opposition in recent weeks including Peterborough, Ipswich and Fleetwood. It was against the latter where they suffered a 5-1 loss, only to then lose 4-0 to Rochdale less than two weeks later.

Having said that, as a former-striker, Ryan Lowe's sides bring high attacking intent, and home-grown youngster Luke Jephcott has drawn attention for his phenomenal start to the 2020/21 campaign, notching 9 goals across all competitions. 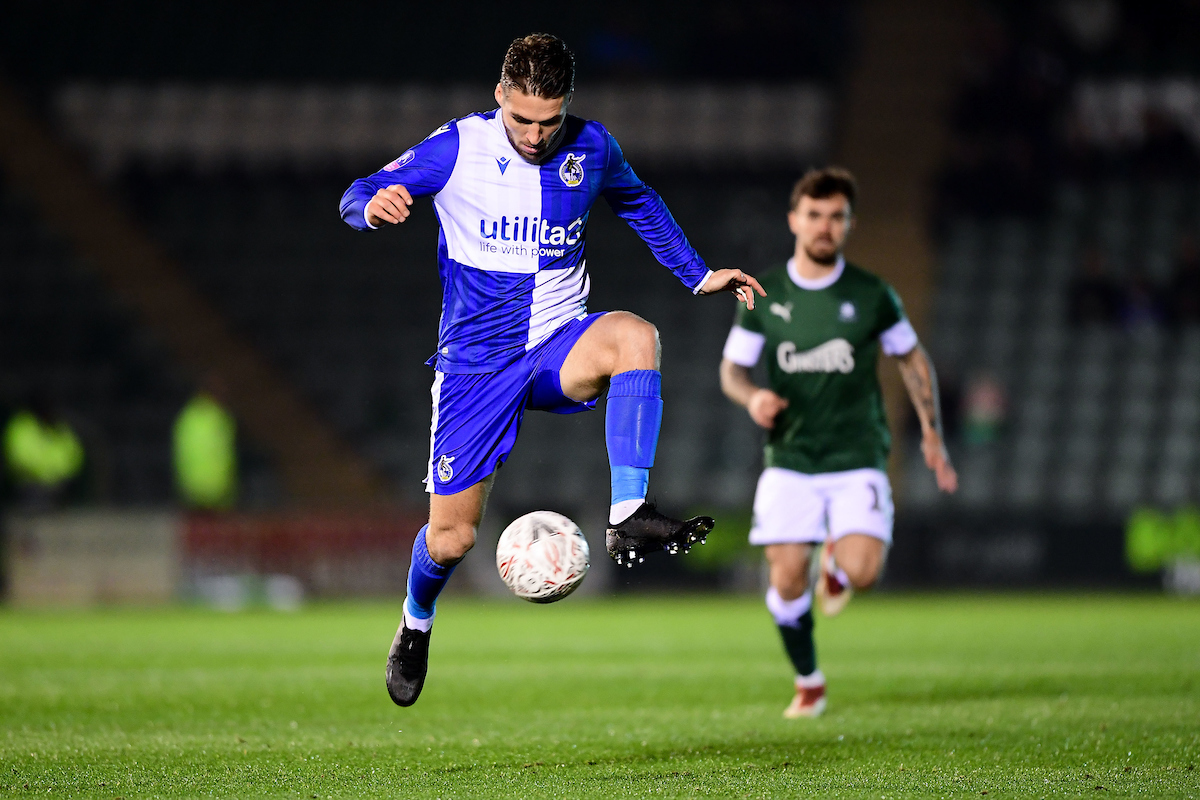 Rovers have enjoyed strong recent successes over Argyle, meeting four times last season including a pre-season friendly, with the Gas unbeaten across every game.

The sides last met live on BT Sport in the 2nd round of the FA Cup, with a replay needed to decide the victor following a 1-1 draw at the Mem. A 68th-minute header from Alex Rodman was enough to see Rovers through, partly due to some incredible heroics from Anssi Jaakkola in between the sticks. Catch our match recap of the game below!

Saturday's game is available to watch on iFollow. All the details for Season Ticket holders and on how to purchase a match pass can be found below...

Tisdale's Gas could move as high as 15th this weekend if results go his way, with Rovers still maintaining a game in hand on many teams around them in the league. 3rd host 4th in one of the largest matches of the weekend, as Ipswich Town welcome Portsmouth to Portman Road. Table-topping Hull City host Shrewsbury Town this weekend, while Sunderland visit Sincil Bank to take on Lincoln City. Around the Gas in the table, Rochdale visit Peterborough United and Swindon Town host Joey Barton's Fleetwood Town.

Rovers record three points at the Mem against Argyle, with a 3-0 victory over the Pilgrims.

A third win in seven days for Paul Tisdale’s side came thanks to first-half goals from Alfie Kilgour and Luke McCormick and a late Zain Westbrooke goal.

A smart corner routine in opening ten minutes, saw McCormick deliver a temping delivery into the area, where Kilgour was on hand to power home a header.

Ed Upson almost added a second goal for Rovers in the first half, with his attempt from inside the penalty area deflected onto the upright.

McCormick turned from provider to scorer for Rovers’ second goal, with his volley from a corner finding the bottom corner.

Just ahead of half time, van Stappershoef made two impressive stops to keep out headers from both Hardie and Aimson.

Hanlan went close to adding a third for Rovers in the final 45 minutes, placing a low effort just the wide of the upright after he was played in on goal by Nicholson.

The expected late pressure from the Pilgrims was handled well by Rovers, with Zain Westbrooke adding a third goal late on, to help record back-to-back league games for the first time since October. 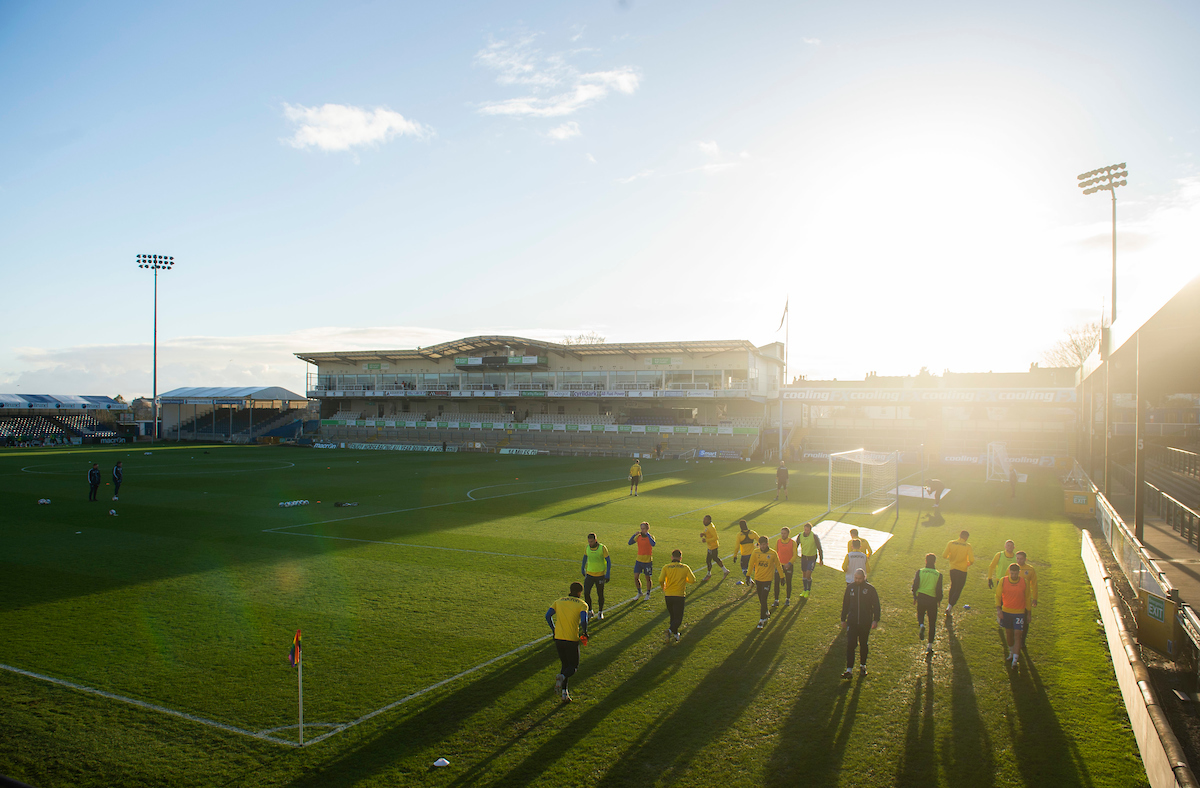 Ahead of kick-off, Rovers made two enforced changes to their starting XI.

Both Jaakkola and Oztumer were forced out of contention through injury, with van Stappershoef deputising in goal and Luke McCormick included to replace Oztumer.

The change in goal saw Liam Armstrong included amongst the substitutes, with Josh Hare, Ali Koiki, Cam Hargreaves, Josh Barrett and Jonah Aynunga all options to call from the bench.

Plymouth also made two changes to their side that faced Shrewsbury last week. Ben Reeves replaced the suspended Danny Mayor, while Ryan Hardie was also drafted in, leading the line with Luke Jephcott.

On the Argyle bench, two former Rovers players featured, with Byron Moore and Dom Telford both on the teamsheet.

Early on in the contest, it was Rovers who stamped an early authority on the game. An impactful run from Josh Grant carved open the Plymouth defence, with the midfielder breaking forward to the edge of the area. With various options ahead, Grant fired a low cross into the goalmouth that was plucked away.

At the other, Argyle had an early opening of their own. Ryan Hardie chased down a hopeful ball over the top and managed to muscle his way onto the ball, taking a touch to take him through on goal. With van Stappershoef to beat, the forward dragged a low effort harmlessly wide of the Rovers goal.

Despite the game lacking the atmosphere of a packed out crowd at the Mem, the tempo of the early stages was certainly lively.

With chances at both ends, it felt like the wait for the game’s first goal wasn’t going to be a lengthy one.

When the first goal arrived in the 6th minute, it went the way of Rovers, who marked a strong start by registering the opening goal. McCormick’s corner from the left was perfectly weighted and played into a threatening area, as Alfie Kilgour timed his run to plant a bullet header beyond Cooper give Rovers the perfect start. 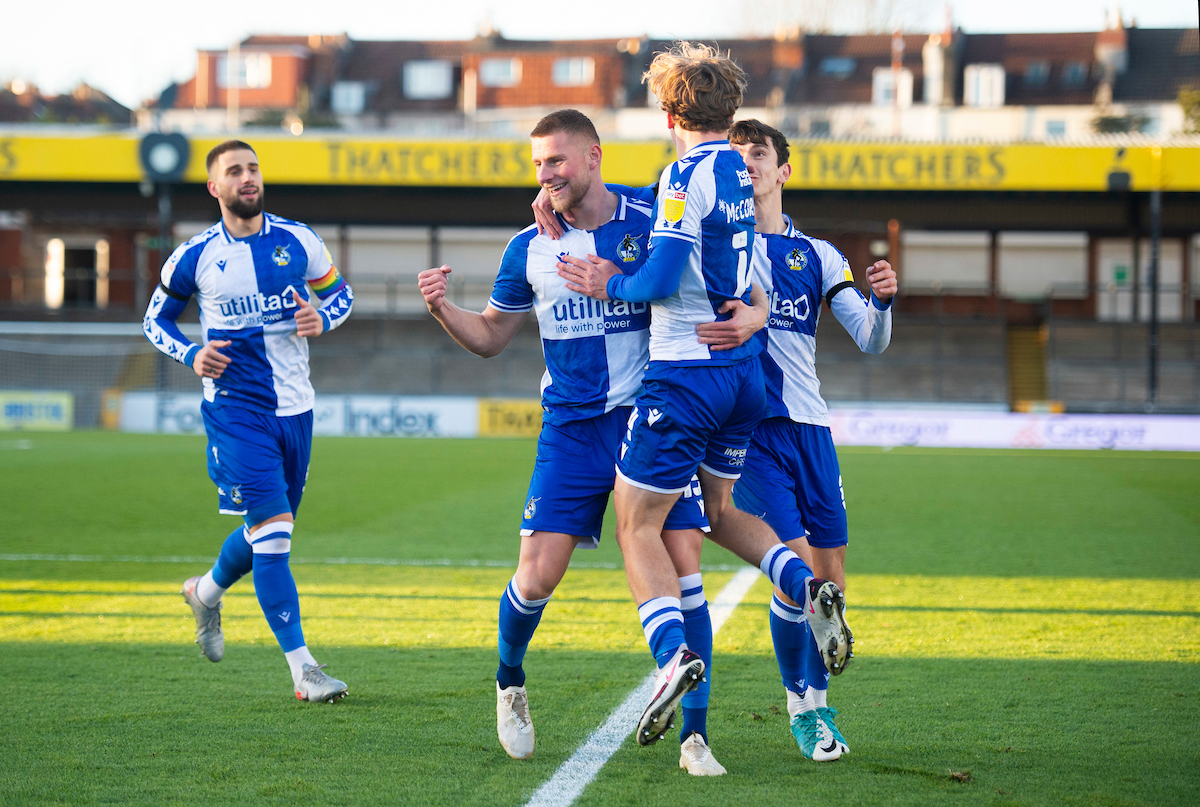 The Gas took a boost from Kilgour’s goal and very nearly doubled their advantage five minutes later. Ed Upson ventured on a twisting run into the Plymouth area, riding two challenges before slotting a side-footed attempt towards goal which took a slight deflection of a stray leg inside the area and was enough to see the effort bounce back off the upright.

Kilgour, who made his first Rovers start against Plymouth at Home Park back March 2019, almost scored again, in exact circumstances to his first goal. The defender once again lost his marker to connect with a header from a corner, but saw his effort deflected clear inside the six-yard area.

Rovers had a firm grip of the momentum in the contest and looked a threat each time they sparked an attack. Zain Westbrooke was prevented from scoring from close-range by a smart reaction stop by Cooper, who somehow got a vital touch to tip the midfielder’s effort from yards out around the post.

The all-important second goal came in the 26th minute. Rovers got their reward for all the attacking play by scoring their second goal from a corner. McCormick and Westbrooke stood over the corner from the left, with McCormick peeling away to make a late run into the area. The decision from the Chelsea loanee paid off, as the reacted the quickest to a bouncing ball inside the area and place a handy volley into the far corner to open his account for the Gas. 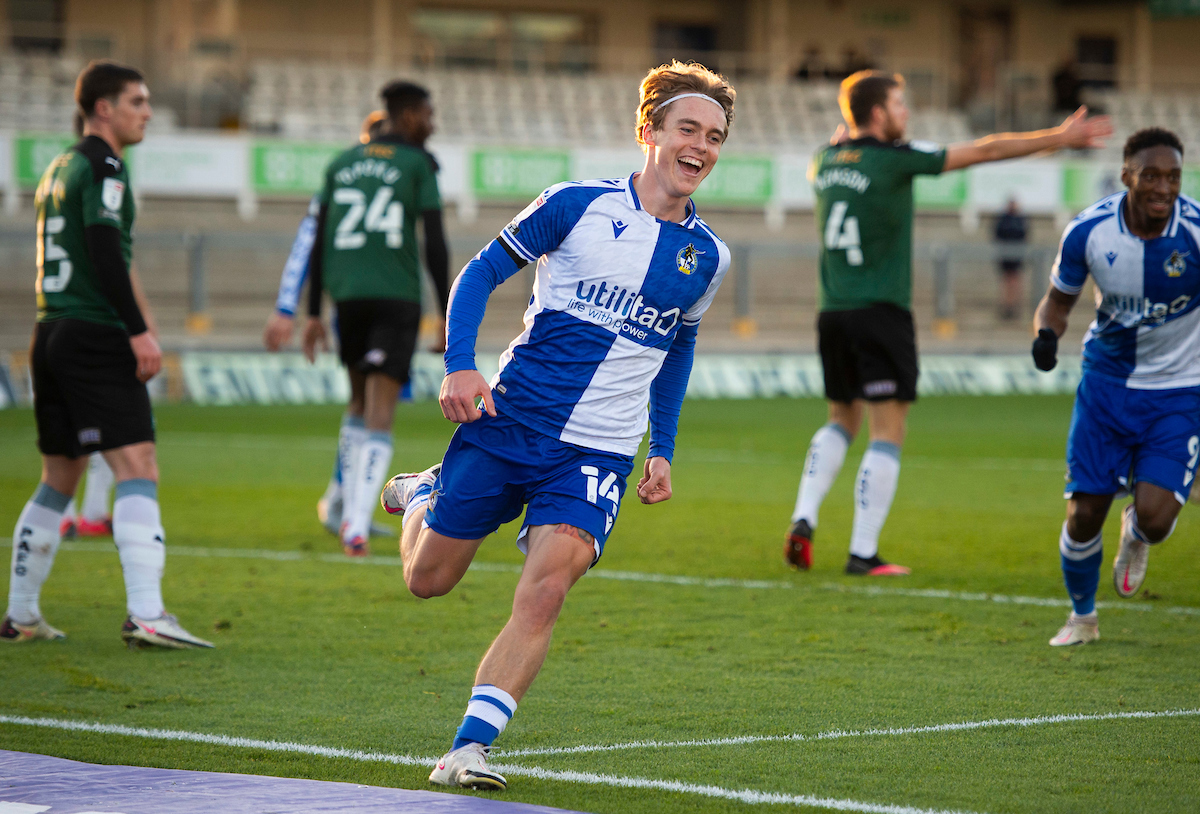 With Rovers on the front foot, it was a relatively quiet half for van Stappershoef. The ‘keeper made an assured stop an effort from Reeves that was struck with intent from the edge area.

The away side mustered a string of late first-half chances to reduce Rovers’ lead before the interval. Ryan Hardie clipped a ball into the path of Jephcott, who in turn, advanced towards goal and directed a low effort wide.

Van Stappershoef also produced an impressive stop down to his right, to push wide a header from Aimson and followed that save up with an even more impressive stop to tip a Ryan Hardie header over the crossbar, with Rovers holding a two-goal lead at the interval.

The visitors made two changes at half time, with Byron Moore and George Cooper introduced.

Hardie, who looked a threat from crosses for Argyle, nodded a header over the target for the visitors in the minutes that followed the interval.

Rovers went close to adding a third goal in spectacular fashion, as Ed Upson lined up a volley from 25-yards out that strayed fractionally wide of the target.

As the hour mark passed, the game still had an open and buoyant tempo. 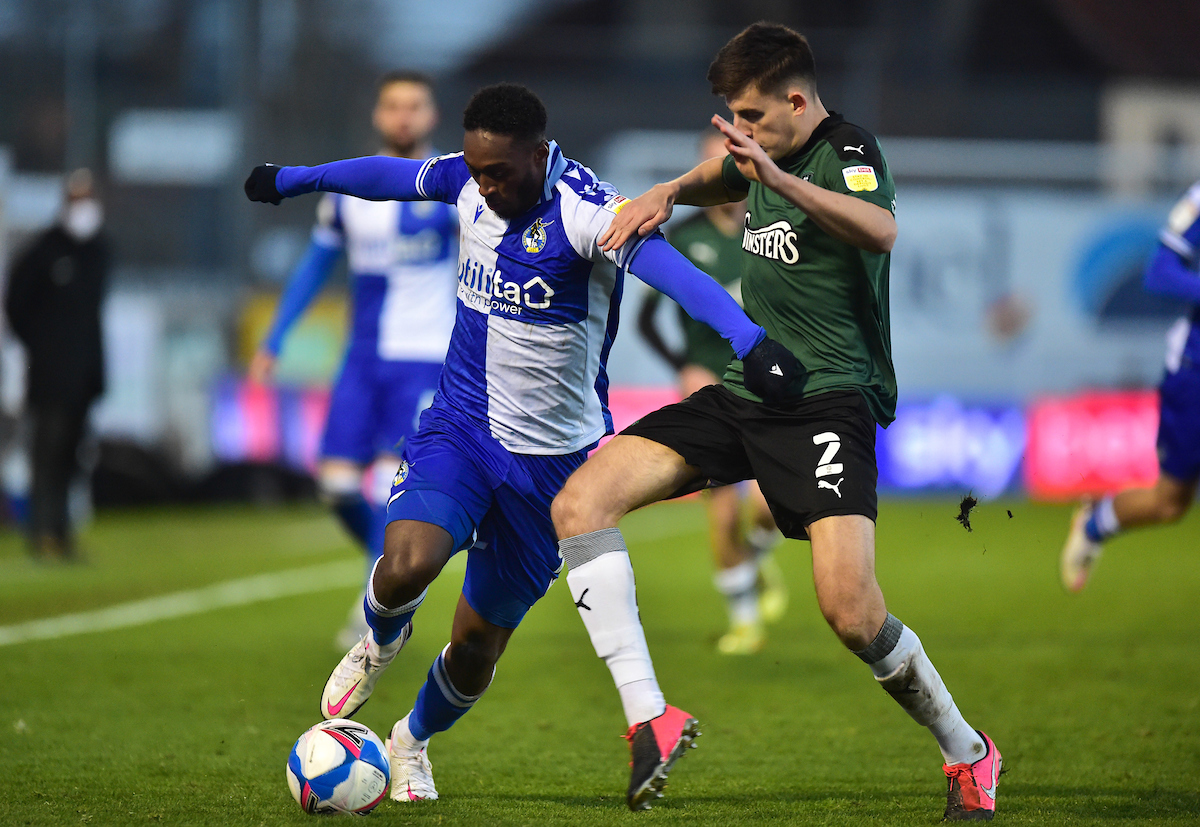 Sam Nicholson’s direct forward drafted space for Hanlan to exploit, as the winger managed to thread a perfectly weighted through ball for the forward to run onto. Hanlan took a touch to narrow the angle on goal and kept his balance to hit a low effort that bounced across goal and bobbled inches wide of the upright.

With a two-goal cushion, the Rovers defence still had to be alert to the threat the Pilgrims possessed on the break. A cross into the area from Cooper landed at the feet of Hardie, who immediately swung a snapshot towards goal that van Stappershoef held at the near post.

Chasing the game, the final twenty minutes saw the visitors hold a sustained spell of pressure in the Rovers final third, but resolute Rovers defending limited any clear cut openings on goal.

Jonah Ayunga replaced Brandon Hanlan, with Ayunga making his first appearance in the league since September, marking his full return from injury.

The final ten minutes the security of a third goal was added, as Nicholson cut back across the area was converted by Zain Westbrooke. 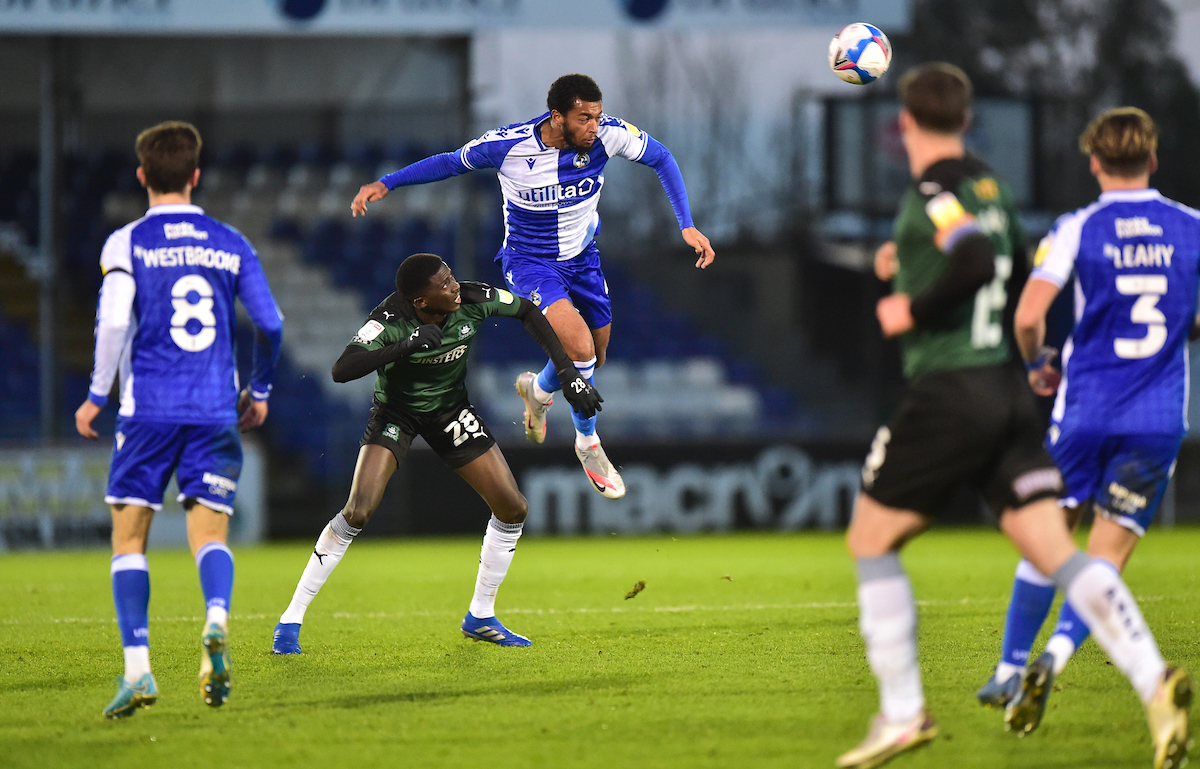 Rovers head back to London in midweek, facing Charlton Athletic at the Valley (7:45pm KO). 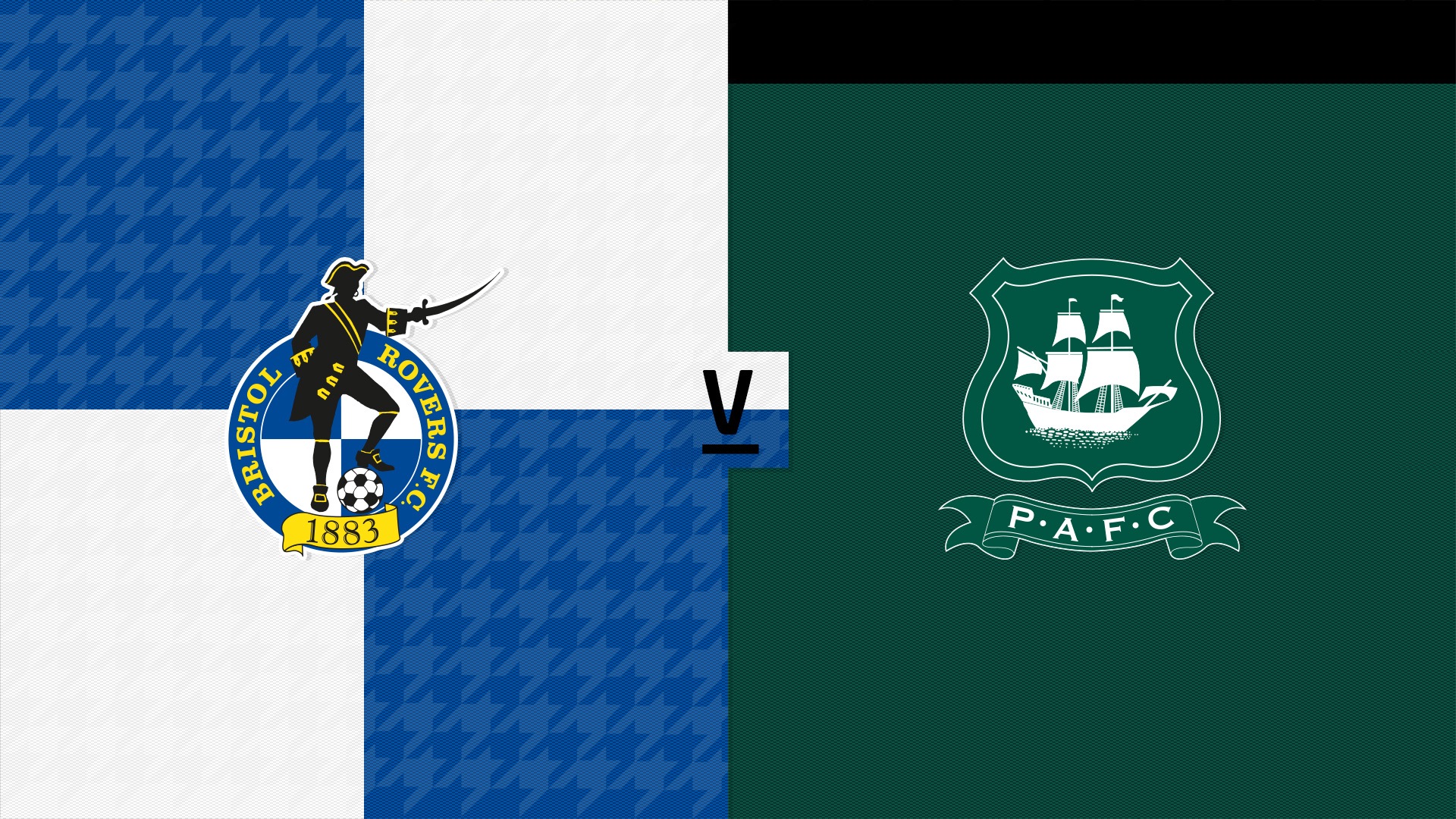 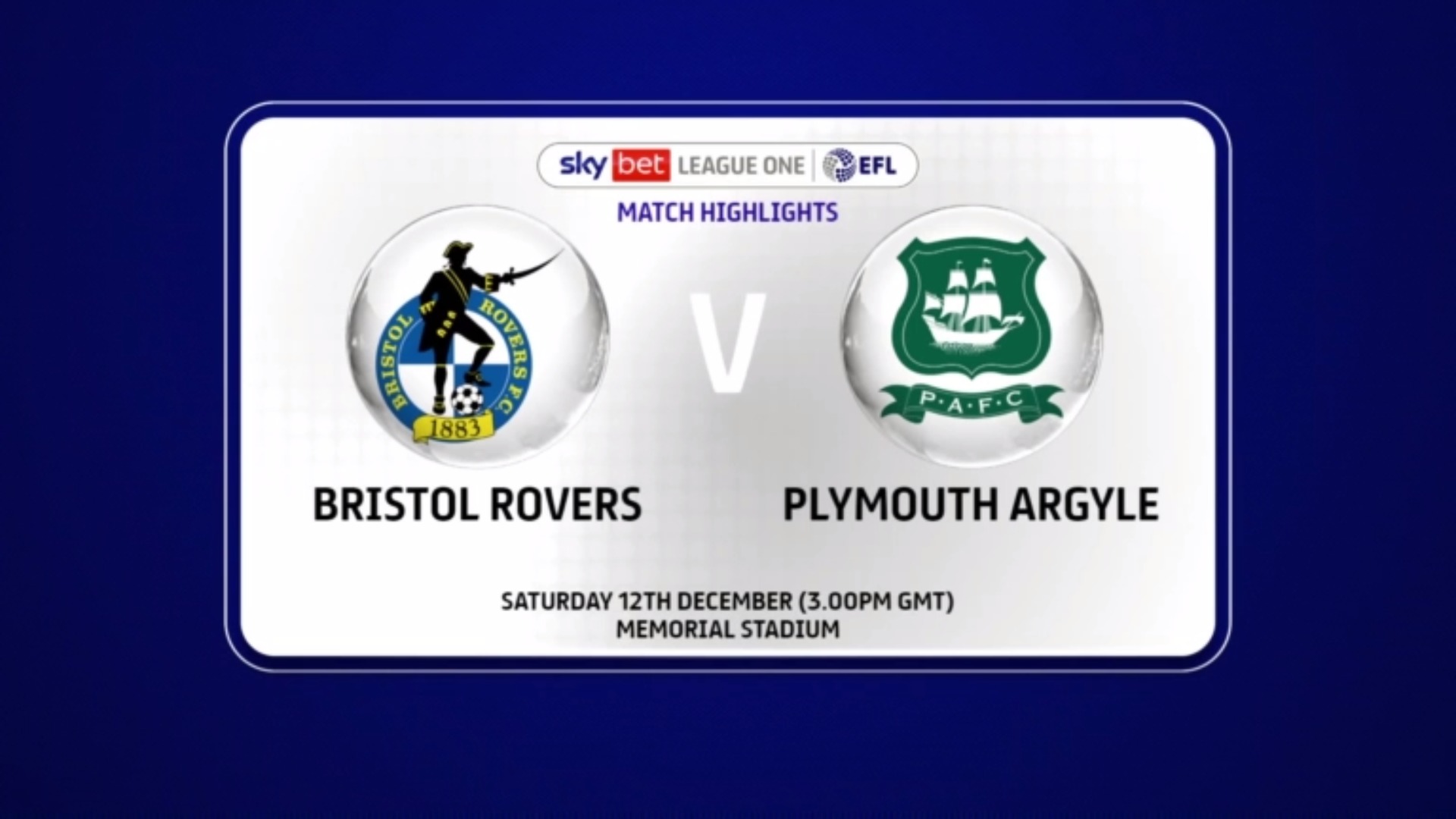 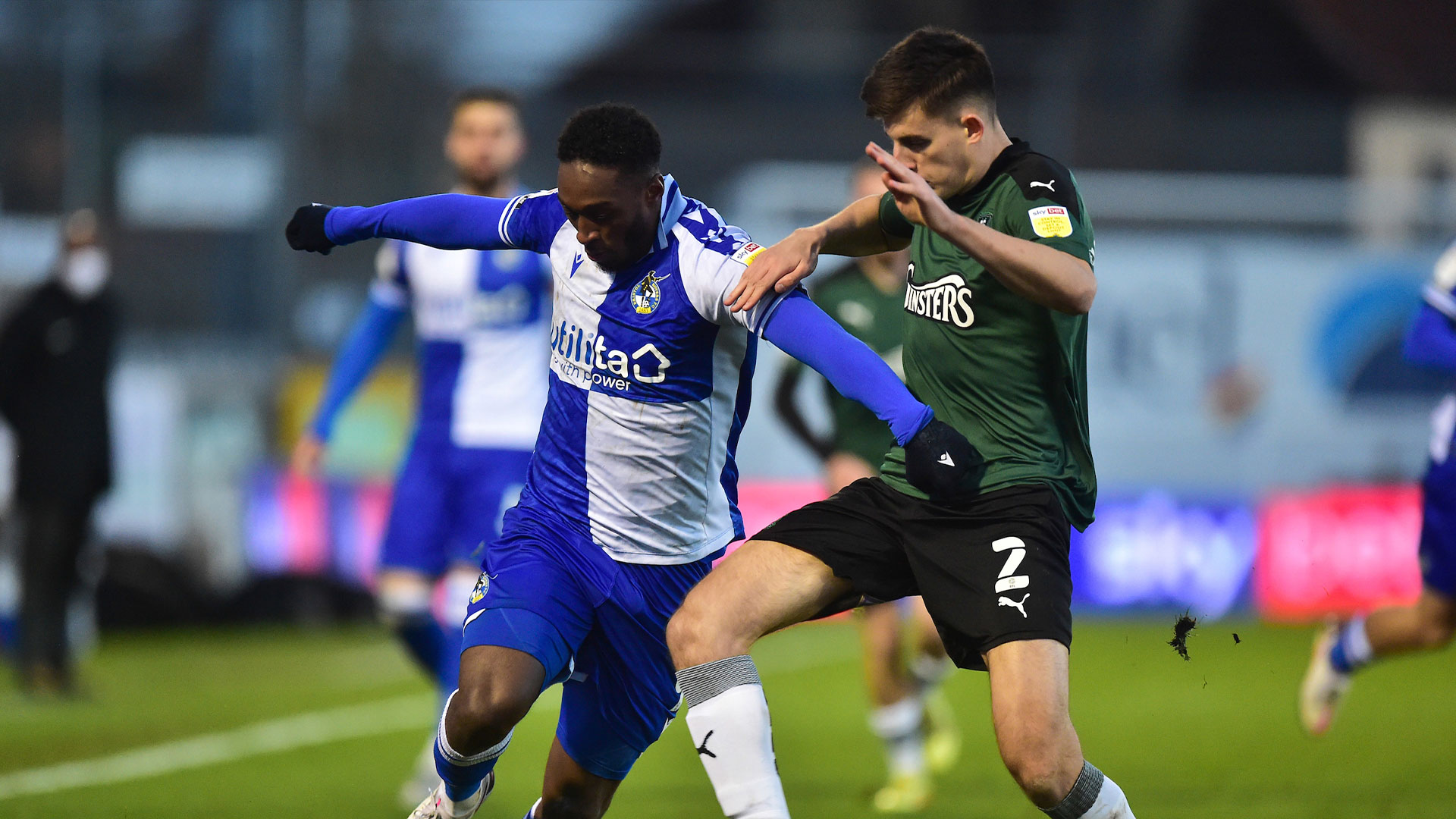