All the pre-match content ahead of Tuesday's Checkatrade Trophy Semi Final against Sunderland at the Memorial Stadium.

Rovers take on Sunderland with the prize of a trip to Wembley on the line, as the two Sky Bet League One sides go head-to-head at the Memorial Stadium for a place in the final.

In the competition so far, Rovers have beaten the likes of Swansea City U21's, Northampton Town and Port Vale to progress to the final four stage and come up against Sunderland just ten days after the last meeting between the sides in the league.

A 4-0 win for Rovers on Saturday proved to be the perfect preparation heading into Tuesday's contest, as Jonson Clarke's Harris' hat-trick fired Graham Coughlan's side to arguably the best result of the campaign so far at the Mem.

Manager's View: The Rovers boss spoke to the media at the Mem on Monday afternoon to offer his preview on Tuesday's game.

Player's View: It was the turn of the Rovers captain to take on press duties, as the defender spoke about the prize of reaching Wembley for the winners on Tuesday evening.

Opposition: Sunderland head into Tuesday's game on the back of a 2-0 win at the Stadium of Light on Saturday over Plymouth. Lee Cattermole opened the scoring for the Black Cats on Saturday, while George Honeyman secured the three points with a late goal. Victory on Saturday kept Jack Ross' side in touch with the top-two in the division, with a game in hand on Barnsley in second place. Away from the league, Sunderland booked a spot in the semi-final of the competition thanks to a 2-0 win over Manchester City's U21's back in January. A highlight for them so far in the competition was a 4-0 win over Newcastle's U21's at the Stadium of Light.

Tickets: Online tickets for the fixture will be available up until midnight on Monday, 4th March and can be purchased via this link. On the day, the Club Superstore will be open from 9am for in-person sales and the match day ticket office will be open from 4pm.  All seats have sold out, however there are plenty of Terrace areas available where you can pay cash or card at the match day ticket office adjacent the Memorial Gates.

Keeping Up With the Game: As usual, we will have updates throughout the game on social media. If you can't make it on Tuesday you can listen live on iFollow. Please note, due to the game being broadcast live on Sky Sports, subscribers won't be able to watch the live on iFollow.

Rovers missed out on the Checkatrade Trophy final at Wembley, following a 2-0 defeat to Sunderland at the Mem on Tuesday night.

In the 43rd minute, Will Grigg found the space to turn and shoot home, then the second period was less than two minutes old when Lewis Morgan was first to a loose ball after Jack Bonham had saved well, prodding home to give the visitors a cushion they never surrendered.

The Rovers line-up included Stuart Sinclair, starting a game for the first time since New Year’s Day, in place of the cup-tied Abu Ogogo. Joe Partington was due to start the game at right back, but James Clarke was drafted in as a late replacement, leaving Rovers with just six substitutes.

Sunderland’s side had two differences to the one that won 2-0 at the Mem ten days previously. Lewis Morgan had replaced Duncan Watmore on Saturday, when the Black Cats beat Plymouth, and kept his place. He was joined by Max Power, who came in to the side in place of Lee Cattermole. 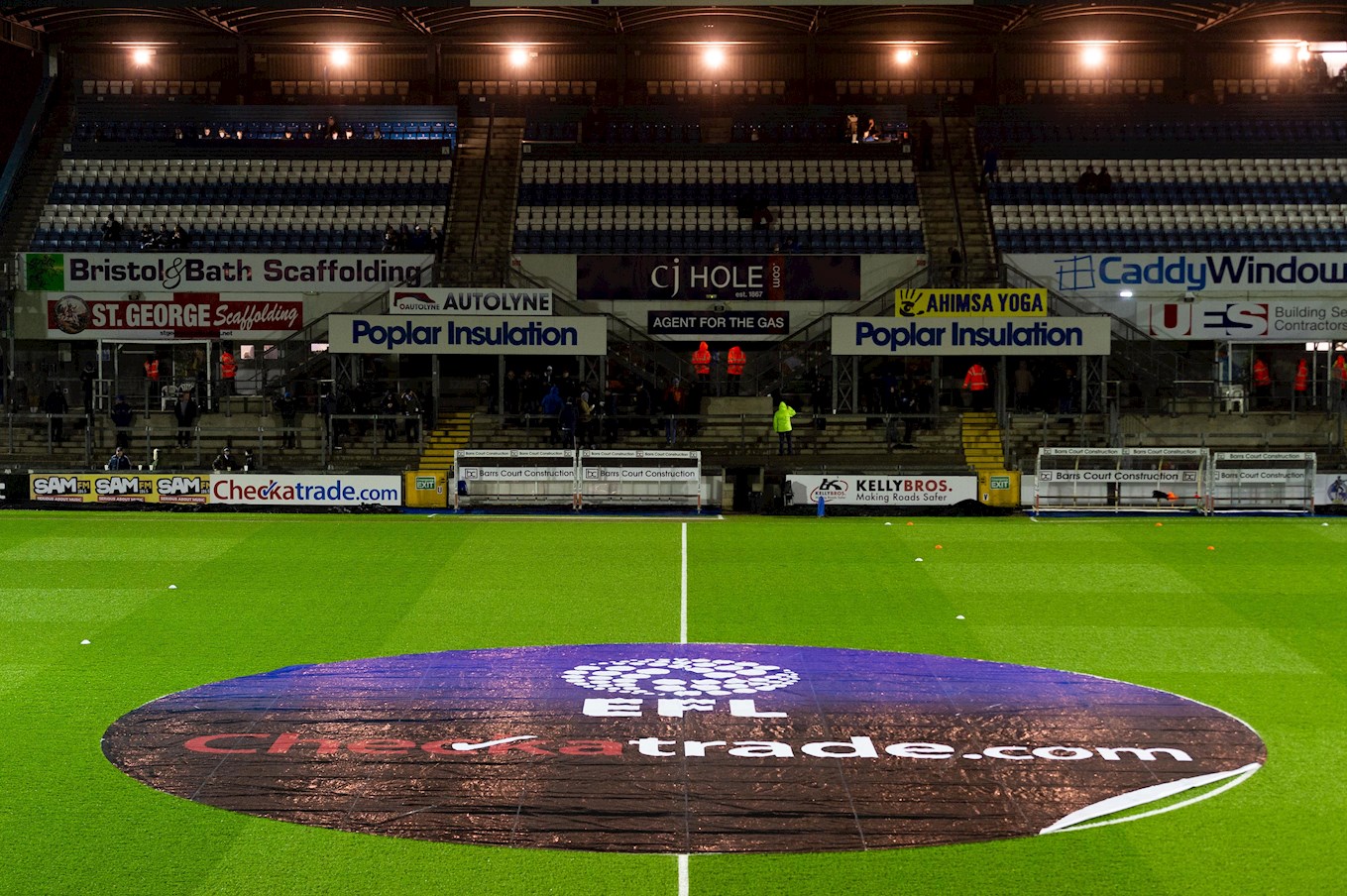 Sunderland reminded the Gas of their capabilities inside ten minutes, when Aiden McGeady curled from the edge of the box with a shot destined for the top corner before Jack Bonham, at full stretch, pushed the ball round. From the corner, Tom Flanagan headed not far over.

Rovers soon got into the game themselves, though, and after a fairly even opening 20 minutes, created a long spell of pressure which nearly told. After Sunderland only half cleared their lines twice, Liam Sercombe teed up Ollie Clarke to cross, and his dangerous low ball was deflected only just wide. Tom Lockyer’s header down from the corner was helped on by Tom Nichols, but caught by goalkeeper Jon McLaughlin.

Sunderland began to reassert, prodding and probing around the Rovers area, but the quartered shirts repelled those with stripes, and looked to hit on the counter-attack. From one break, Nichols tore down the right, and squared to Clarke-Harris, who helped on to Sinclair, advancing to his left. The dynamic midfielder looked to have squandered a chance when he cut inside on his right foot, but he stayed calm and set up Clarke-Harris. The forward’s shot was saved, but spilled, and Sinclair very nearly followed up.

Soon after, Clarke-Harris was fouled, and his quick-thinking led to him taking a free-kick quickly, setting Sercombe away, and his cross was again spilled by the edgy Sunderland goalkeeper.

Nichols went in to the book for one of those tackles that splits a crowd down the middle. He got the ball, but was it dangerous? The referee decided on reckless, and showed a yellow card.

Just two minutes before half-time, Sunderland produced the killer pass they had searched for 43 minutes. Max Power feigned to shoot but instead fed Will Grigg, who spun quickly in the area, and shot low past Bonham.

Rovers responded with a superb multi-man move, eventually working the ball wide to James Clarke, and his cross was only just stopped from reaching Clarke-Harris at point-blank range because of a superb intervention by Jimmy Dunne. 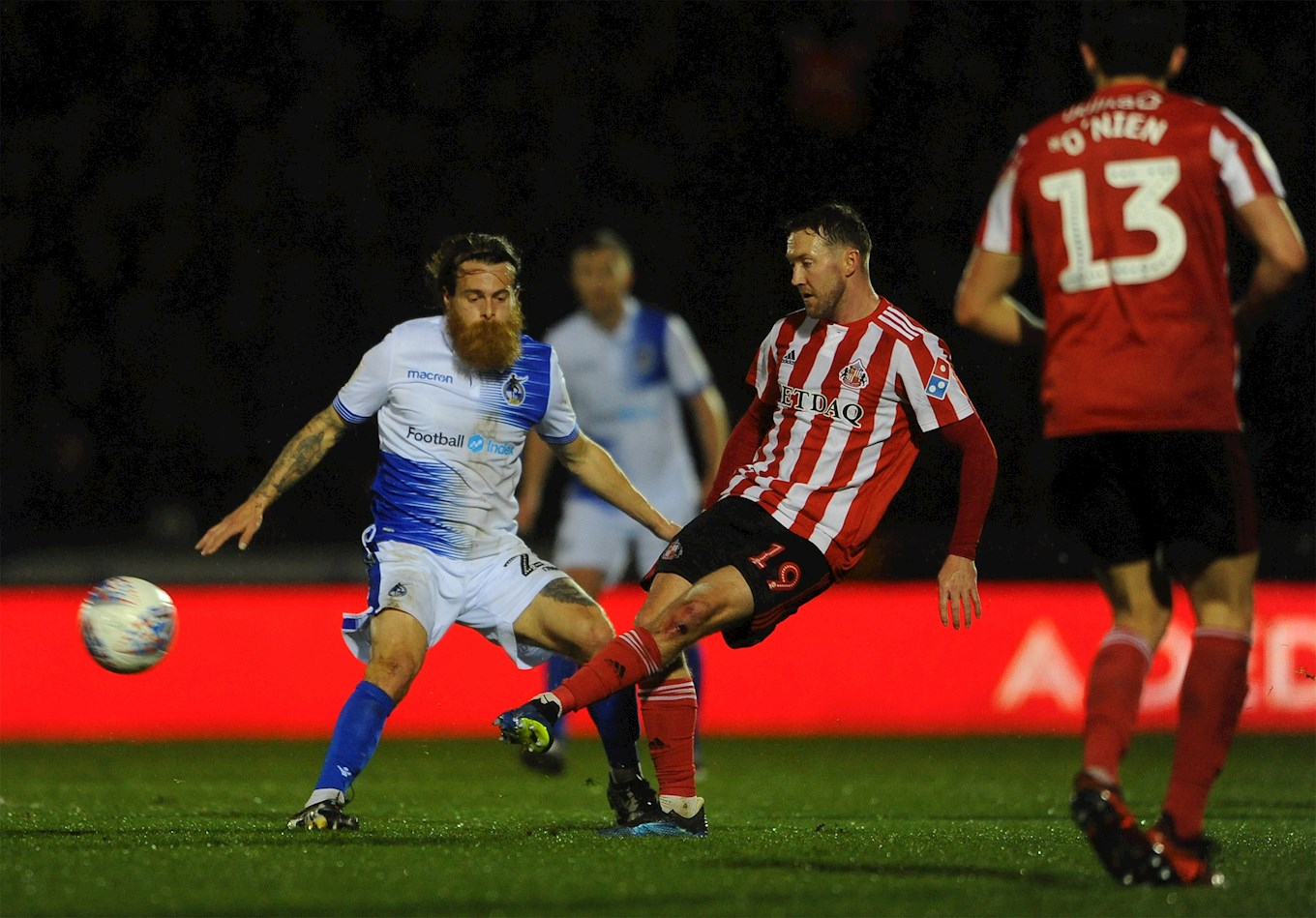 The start of the second half was palindromic of the first. Only 100 seconds had elapsed and Sunderland had scored what felt like a killer second. McGeady’s effort from the edge of the area was parried, but Morgan got to the loose ball first and was faced with a simple finish, which he took with relish.

Rovers’ response was almost perfect. A deflected shot led to a corner, from which Lockyer found acres of space, ten yards out. He could only his header over the bar – what a momentum switcher it could have been had he been more clinical.

Sunderland looked for a third to ut Rovers totally beyond reach. Max Power hit a shot with…well, a lot of power, which Bonham shovelled away, and Morgan tried his luck from distance too, only to find Bonham’s arms.

At the other end, Rovers kept pushing. A smart incursion by Holmes-Dennis ended in McLaughlin saved well at his near post. This led to three consecutive corners, the second of which nearly yielded a goal, as James Clarke stole in at the near post but his flick was deflected wide.

With 20 minutes remaining, Graham Coughlan opted for a three-pronged change to try to get back in the game. Chris Lines, Alex Jakubiak and Michael Kelly came on, replacing Sinclair, Nichols and Ollie Clarke, with Rovers switching to a more orthodox 4-4-2 to try and utilise the width of the Mem.

Thanks largely to good game management by Sunderland, Rovers could not get a foothold in the tie. A corner or two cannoned around the area, and a cross or two looked promising before getting ejected from danger.

Congratulations to Sunderland, who we wish well in the final. For the Gas, attention can be entirely focused on the important business of staying in Sky Bet League One. 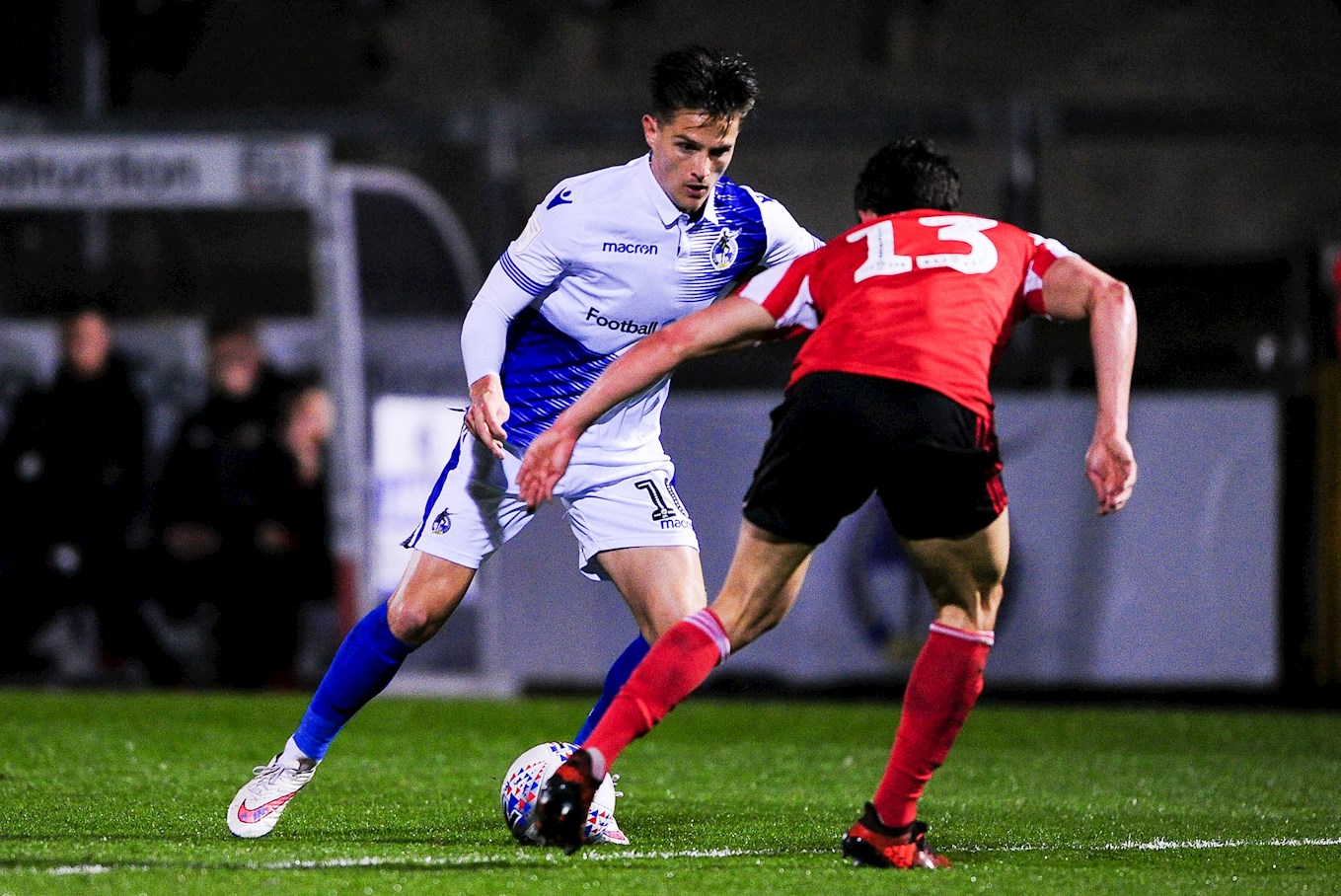 Tickets for our Checkatrade Trophy Semi-Final tie against Sunderland are now on general sale, with added incentives for people purchasing tickets online.

Rovers host Sunderland at the Mem on Tuesday, 5th March (7:45pm kick-off) to battle for a spot in the Checkatrade Trophy final at Wembley.

Tickets for the tie are now on general sale and are available online and in-store at the Club Superstore, which is open 9am-5pm, Monday to Friday.

In keeping with previous rounds, U11s tickets are reduced to just £1 for the tie, with seated tickets for concessions (U21/65+) available for £12.

Full ticket prices for the fixture listed below;

The North Terrace, seated sections of the East Stand, the Bristol Energy Family Stand, West Stand (seated sections) and East Stand Terrace will all be open for the fixture.

Tickets will have to be purchased through THIS LINK, as opposed to the usual online method.

After that, follow these instructions to purchase your tickets;

- Enter email and password (if this does not work, use the account number shown on your season card)

- Please note, the seat selection function does not work on tablet devices and will need to be done on a desktop.

Online tickets for this fixture will be available up until midnight on Monday, 4th March. 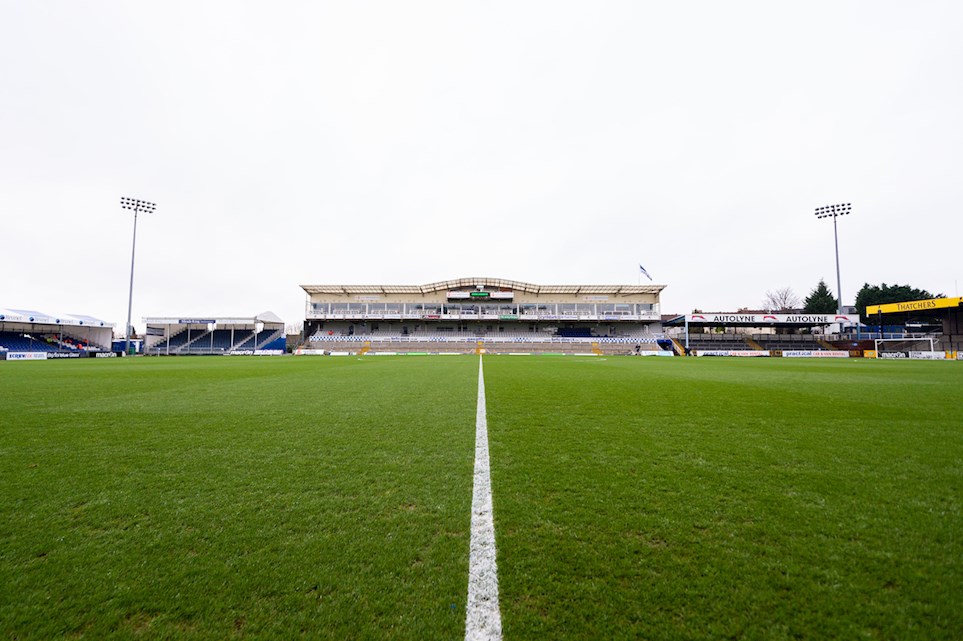 
Supporters are reminded that Saturday's Sky Bet League One fixture at the Mem against Sunderland is an ALL TICKET fixture.