A wonder-strike from Antony Evans was enough to see off ten-man Barrow to ignite the Gas' promotion push.

Rovers rang the changes on a rainy night, with Collins, Coutts and Finley making way for Anderton, Whelan and Leon Clarke.

James Belshaw was called into early action, with a smart low stop as Barrow threatened to make a quick start. The Gas were soon up the other end, though, and Elliot Anderson flashed a 25-yard drive inches over Farman's bar.

The Gas were on top now and so nearly went ahead in the fourth minute as Harry Anderson's goalbound shot was somehow deflected behind for a corner by the legs of Farman.

Elliot Anderson was pulling the strings once again in midfield as Barrow afforded him plenty of space in which to do so.

Luca Hoole then delivered a wicked ball across the box in the 20th minute as the Gas continued to ask serious questions of their visitors.

Connor Taylor conceded a free-kick to give Barrow some welcome respite, but Driscoll-Glennon's cross evaded everyone in a pink shirt and drifted harmlessly behind for a goal-kick.

Leon Clarke was next to get a shot away, but his low effort didn't overly trouble Farman, who was able to gather at his near post.

Then came a turning point. Clarke raced through the middle but was fouled by Canavan. Referee Rock didn't initially give a foul, but with his assistant frantically flagging, he soon stopped play and showed the centre-half a straight red card.

Antony Evans grabbed the ball and lined up a free-kick from the edge of the box. The midfielder struck the ball, if anything, too well and it flew 10 yards over the bar.

There was drama in the 37th minute; Harry Anderson's shot was scrambled off the line and onto the post, before rebounding to Evans, whose shot was also cleared off the line.

In the 42nd minute, a Rovers corner was cleared as far as Elliot Anderson. His shot was acrobatically turned away by Farman.

The on-loan youngster was at it again in the 44th minute, exchanging passes with Clarke before shooting straight at the over-worked goalkeeper.

He was called upon again in added time to tip Nicholson's cross over his bar. This left him in a crumpled heap in the back of the net and requiring treatment.

Barrow then broke from the corner and Gotts was fouled by Evans, who received the Gas' first card of the game.

In the 53rd minute, Anderton was shown a yellow for a late tackle on White.

A superb ball from Evans unlocked the Barrow back-line and found Nicholson, who pulled it back for Clarke, but the big striker had the ball pinched off his toe just as he prepared to pull the trigger.

Aaron Collins came on for Nick Anderton in the 59th minute, as Rovers searched to find a way to break down the 10 men.

Clarke skied over the bar from five yards as the Gas turned up the heat.

Collins saw yellow for a professional foul in the 67th minute, before jinking and driving into the area a minute later to try and tee up Clarke.

Time was not on Rovers' side and a fading Elliot Anderson was replaced by Ryan Loft as the Gas went with four upfront for the remaining 20 minutes.

Nicholson slid in at the back post from an inviting Collins cross but just failed to find a touch. 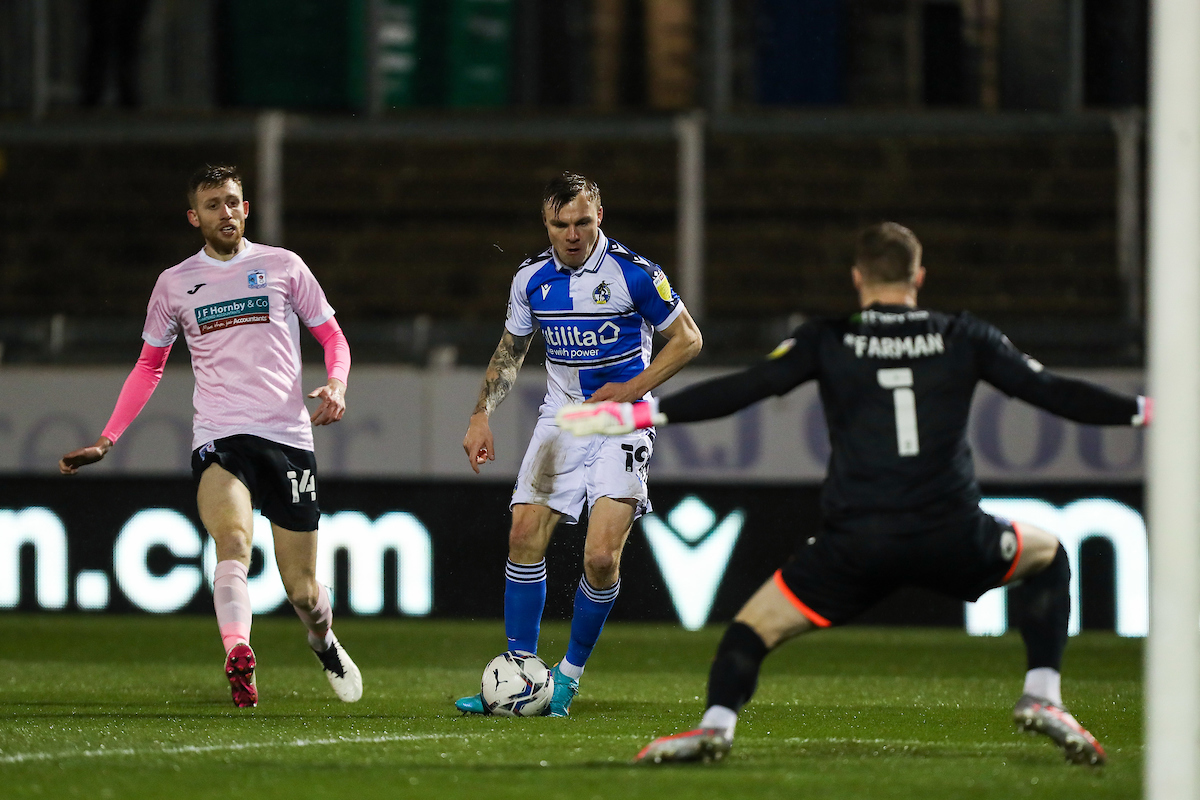 Collins then brought the save of the night from Farman; the Barrow stopper diving full-length to stop the striker from finding the bottom corner.

Rovers were peppering the Barrow box now, but the ten men were valiantly holding on in front of their 88 travelling fans.

Rovers made their final substitution in the 79th minute, with Clarke being replaced by Harvey Saunders.

The breakthrough finally came in the 81st minute. Antony Evans received a pass from Whelan 25 yards from goal, took one touch and lashed the ball into Farman's top left-hand corner. It was going to take something special to beat the 'keeper and the Filton Ave Figo rose to the challenge.

It was almost calamity a minute later as a deflected Barrow free-kick left Belshaw stranded and he could only watch as the ball flew along the deck and, thankfully, out for a corner.

Belshaw then pulled off a spectacular save to keep a header out as Barrow threw everything forward in search of an equaliser.

Rovers travel to Rodney Parade for their next Sky Bet League Two match on Saturday to face Newport, kick-off 3pm.