A rampant display at The Lamex from the Gas.

Rovers boss Joey Barton named an unchanged starting XI for the clash at The Lamex Stadium with Ryan Loft coming back into the matchday squad as a substitute.

Wet and windy conditions before the match were replaced with bright sunshine at kick-off and Rovers looked the brighter side at the start of the match and had the first sight of the goal early on with Nicholson setting up Finley after a jinking run, the midfielder was unfortunate to drag his shot wide of Christy Pym's goal. 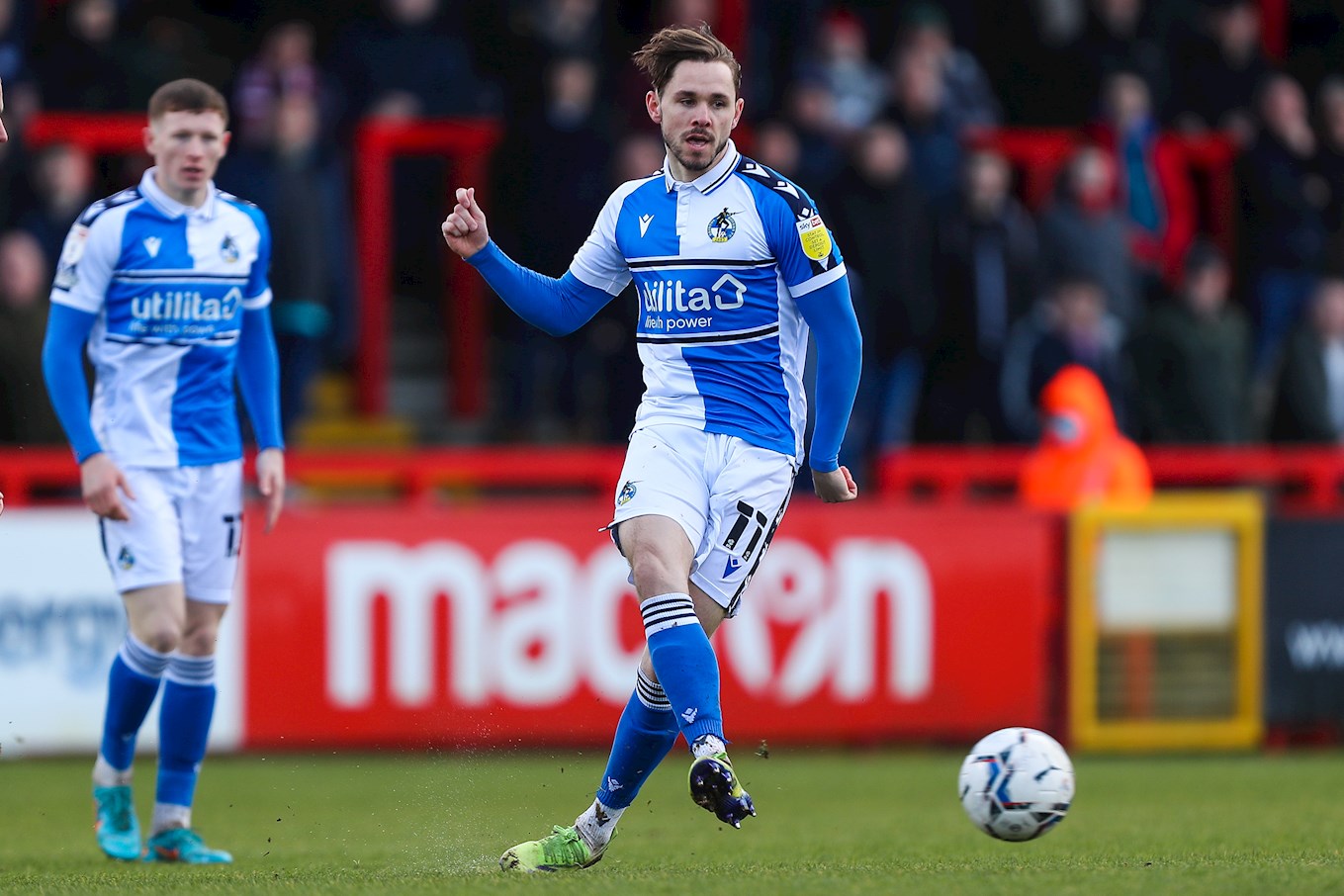 The travelling Gas had another chance in front of the Boro goal in the 9th minute. Harry Anderson's attempted shot was blocked by the Stevenage defence only for the ball to rebound to the in-form Aaron Collins. The Rovers No. 10 looked to hit a fierce shot towards goal but was only able to hit the hands of Pym who was well-positioned to save the shot on his goal.

The hosts had a flurry of chances in the 14th minute. A long throw-in from Luke O'Neil caused uncertainty in the Rovers penalty area. Three consecutive blocks from the Rovers defenders kept Boro at arm's length and the Gas were able to clear the ball away from danger.

Collins had another sight of goal on the 21st minute after Harry Anderson cut the ball back to the forward. Looking to pull it back across the goalkeeper, Aaron only managed to find the legs of Pym. Stevenage then looked to hit on the counter-attack, Paul Coutts was shown the first caution of the match after halting the hosts' counter-attack.

Luke Norris then missed a glaring chance after being played in on goal. The forward was only able to lift the ball over the bar much to the delight of the 703 travelling Gasheads.

Elliot Anderson then bamboozled the Stevenage players in the box shortly after. Going left and right he dug out a shot which flew just wide of the far post and behind for a Boro goal-kick. Bestwick was booked shortly after the goalmouth action after fouling Finley just inside the Boro half.

Finley came so close to opening the scoring after surging past the Stevenage defenders and rounding Pym only for his goalbound shot to be deflected wide of the target for a Rovers corner kick. Moments later, Finley found the back of the net. A beautiful curling effort from the edge of the box beat Pym all the ends up and flew into the top corner to make it 0-1 to the Gas. 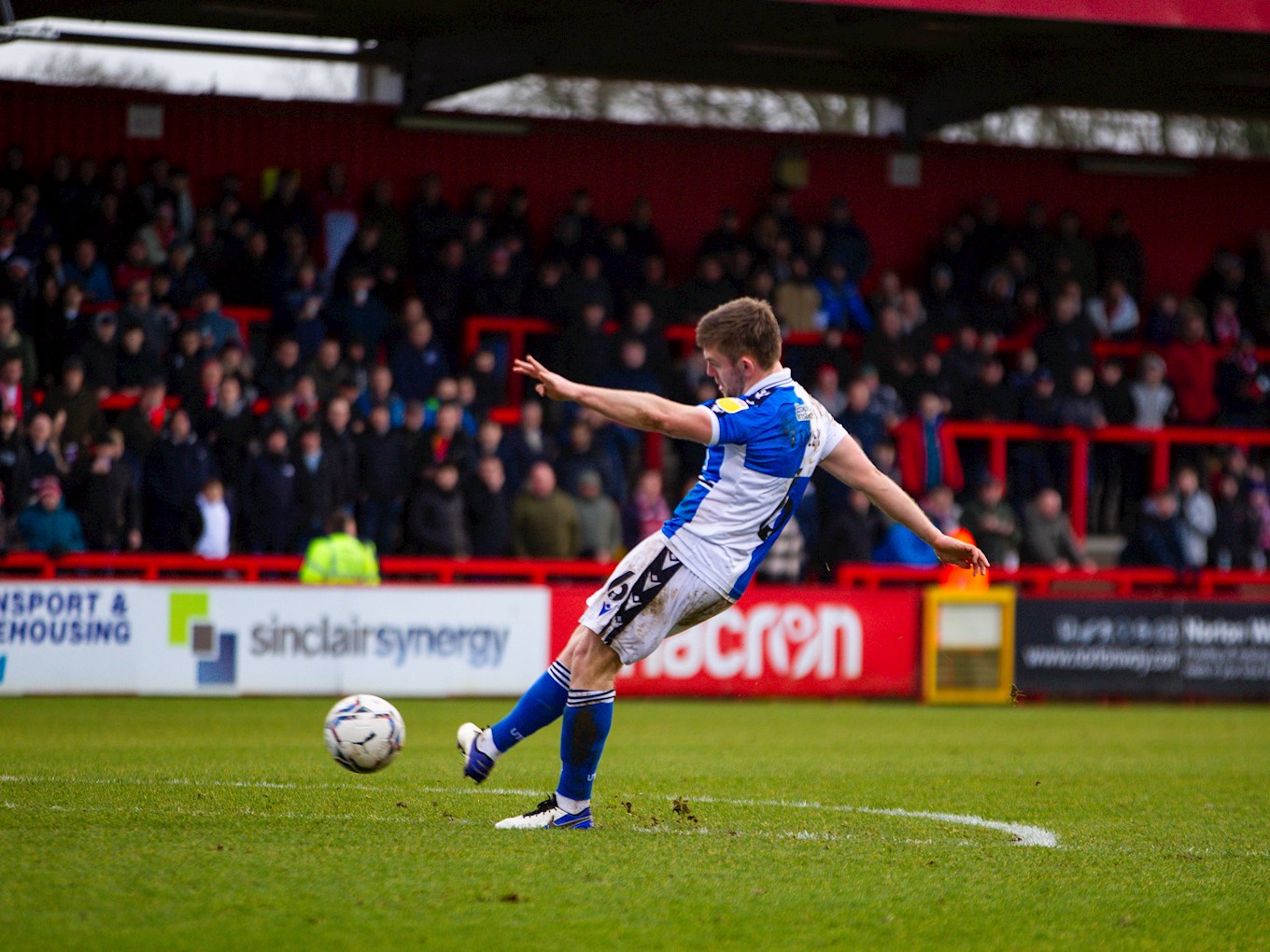 Rovers were asserting their dominance on the game now and came close to doubling their lead through Elliot Anderson. The Newcastle loanee looked to loop a shot over Pym, but the Boro 'keeper was on hand to tip the ball over.

Rovers began the second half as they ended the first, with a goal. Elliot Anderson got on the end of Sam Nicholson's clever back heel flick and fired a venomous shot past Pym for his first goal in blue and white. 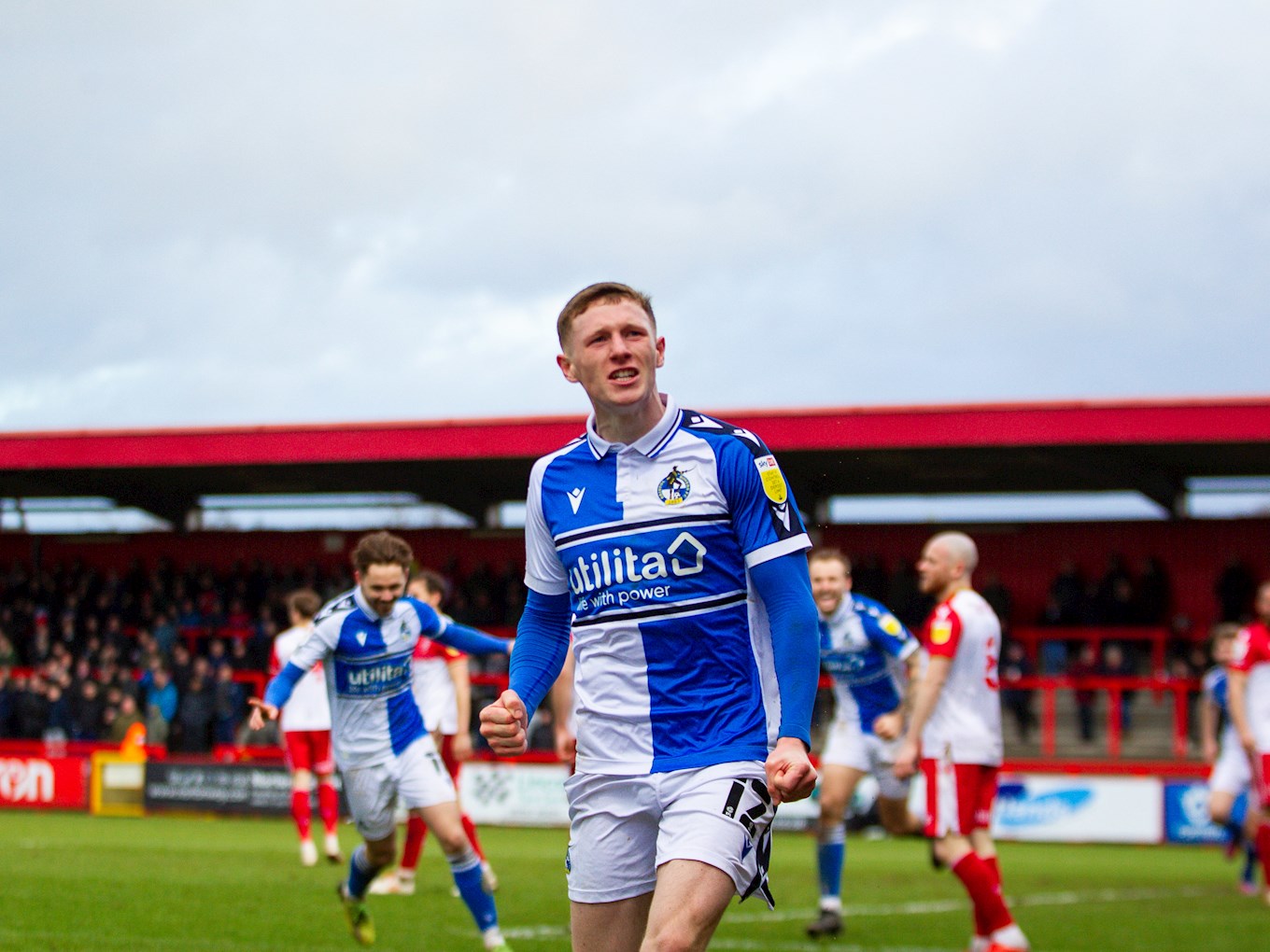 The Gas were on the ascendancy now, with Aaron's effort being well saved by Pym again. Rovers found the third goal soon enough. Nicholson picked out the other Anderson on the field, Harry, who fired home from close range for his second goal in as many games. 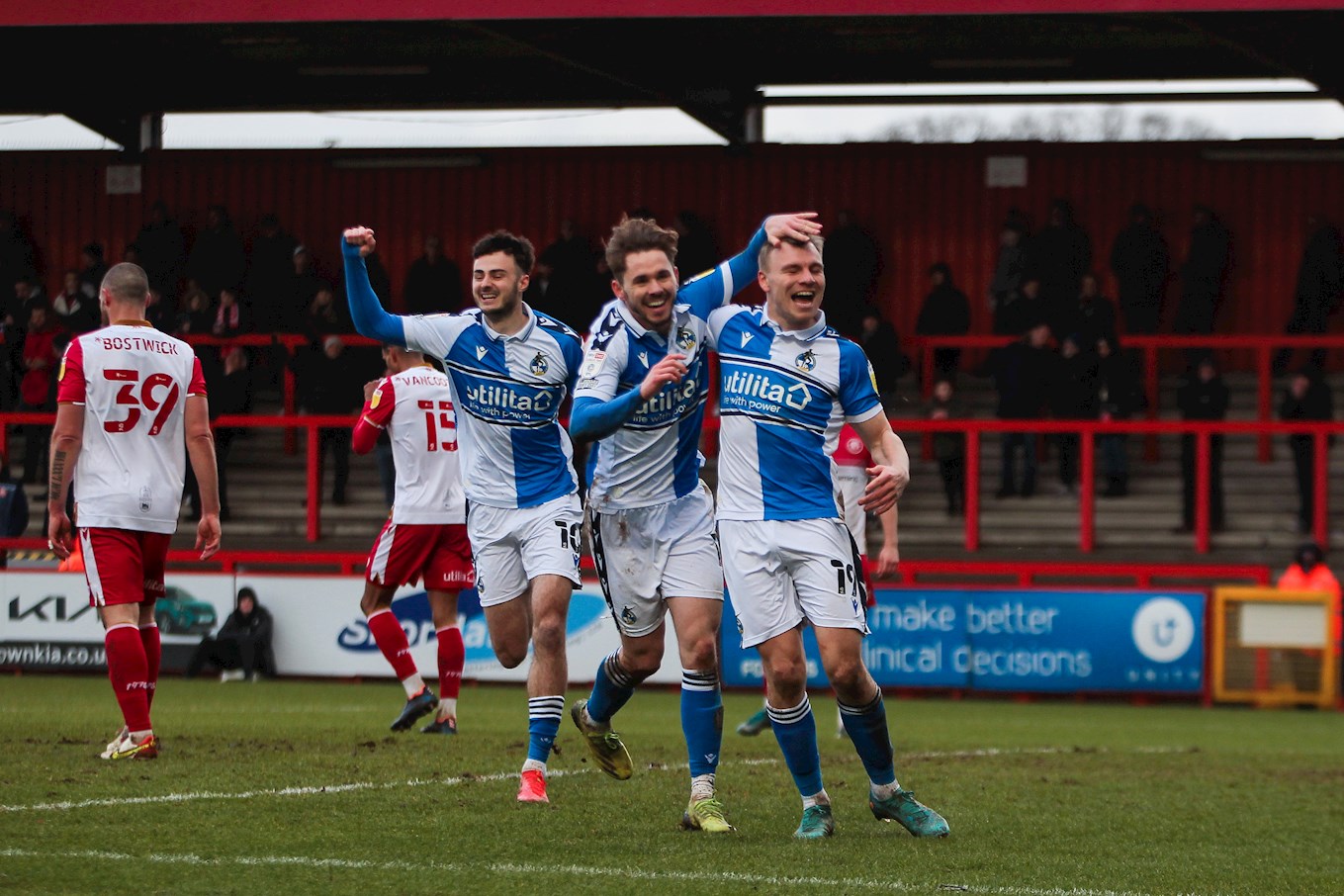 Nicholson then had his chance to get on the scoresheet. Aaron played in the Rovers No. 11 who looked to lift his effort over Pym but the Boro 'keeper spread his body and blocked the Scots effort on his goal.

Rovers made their first change of the afternoon on the hour mark. Paul Coutts being replaced by Glenn Whelan for the remaining 30 minutes.

Rovers came close to making it four after Elliot's superb ball found itself at Nicholson's feet. The Rovers winger bore down on Pym's goal but was unable to squeeze a shot through the Boro No. 1's legs. Nicholson was then replaced by the returning Ryan Loft in the 69th minute, with the winger receiving an ovation from the Gasheads behind Pym's goal.

Belshaw was called into action in the 72nd minute. A quick dive to his left to deny a headed effort from the Stevenage attackers and turn it behind for a corner. Up the other end, Loft was involved straight away. Ryan ran at Clements and looked to catch Pym out at his near post with his effort only for the ball to cannon off the bar and fall at Aaron's feet for a tap in to put the Gas four up. 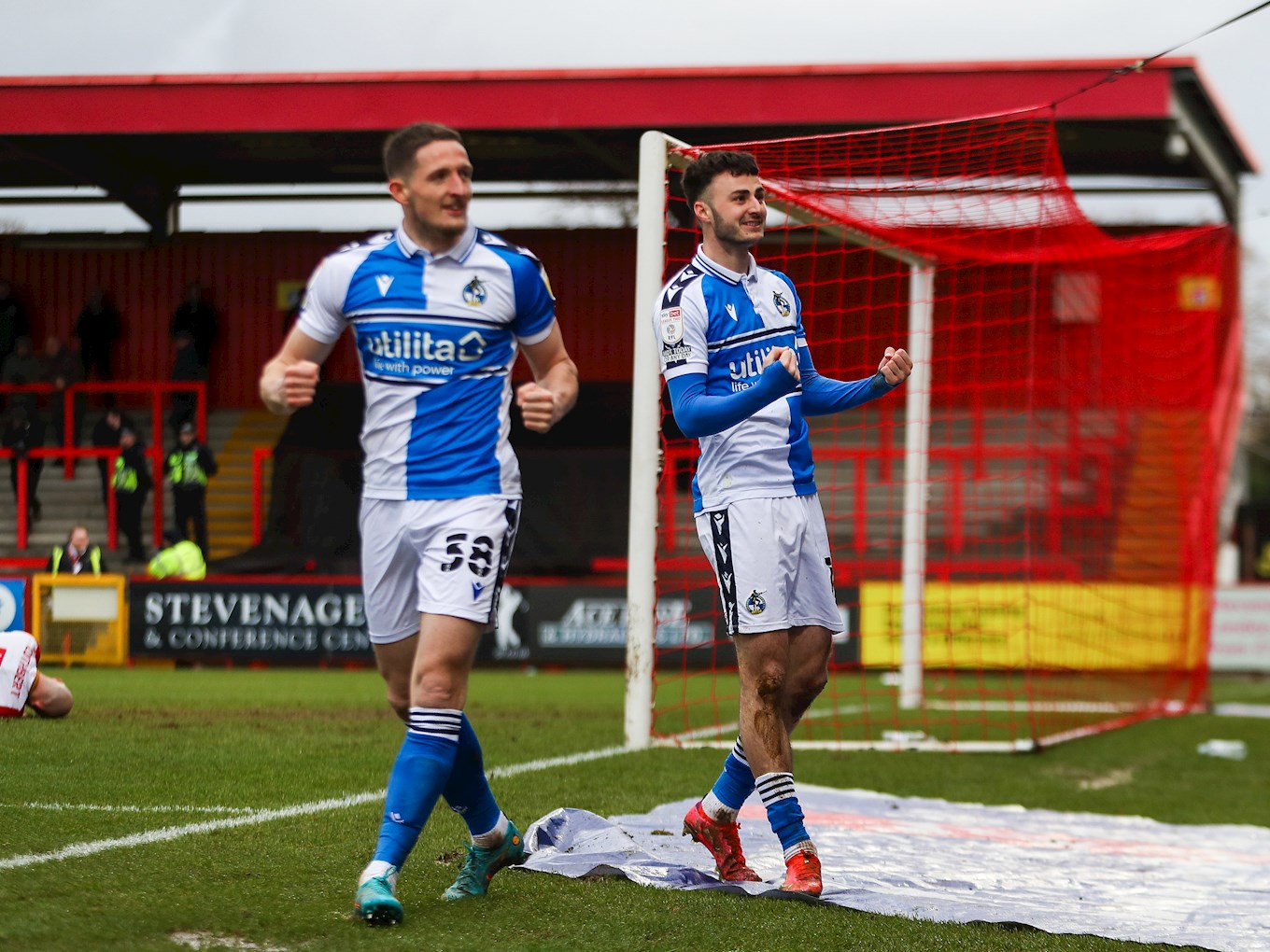 Rovers looked to make it five through Thomas' mazy run who then played in Collins but the hosts were able to regain the ball. The Gas comfortably saw out the remainder of the game at The Lamex and head back to BS7 with a thoroughly deserved three points in the bag.

Next up for the Gas is the mid-week trip to Leyton Orient on Tuesday, 22nd February (7:45pm KO).