“It still hasn’t sunk in. I keep waking up and I’ve been dreaming about singing ‘Don’t you know, pump it up, the Gas are going up!”

Promotion hero Aaron Collins – who scored five goals in a whirlwind final week of the season – spoke to Bristol Rovers’ Head of Media Andy Downie about the lows and highs of a rollercoaster season.

“It’s in my head all day that song. It’s all been a bit of blur since half-time at Rochdale to be fair.”

At that precise moment, Rovers found themselves 2-0 down, in 8th position in the table, not even in a play-off spot. Fast forward 135 pulsating minutes of football, the Gas had scored 11 goals and finished in 3rd spot, pipping Northampton to the final automatic promotion spot by virtue of goals scored. 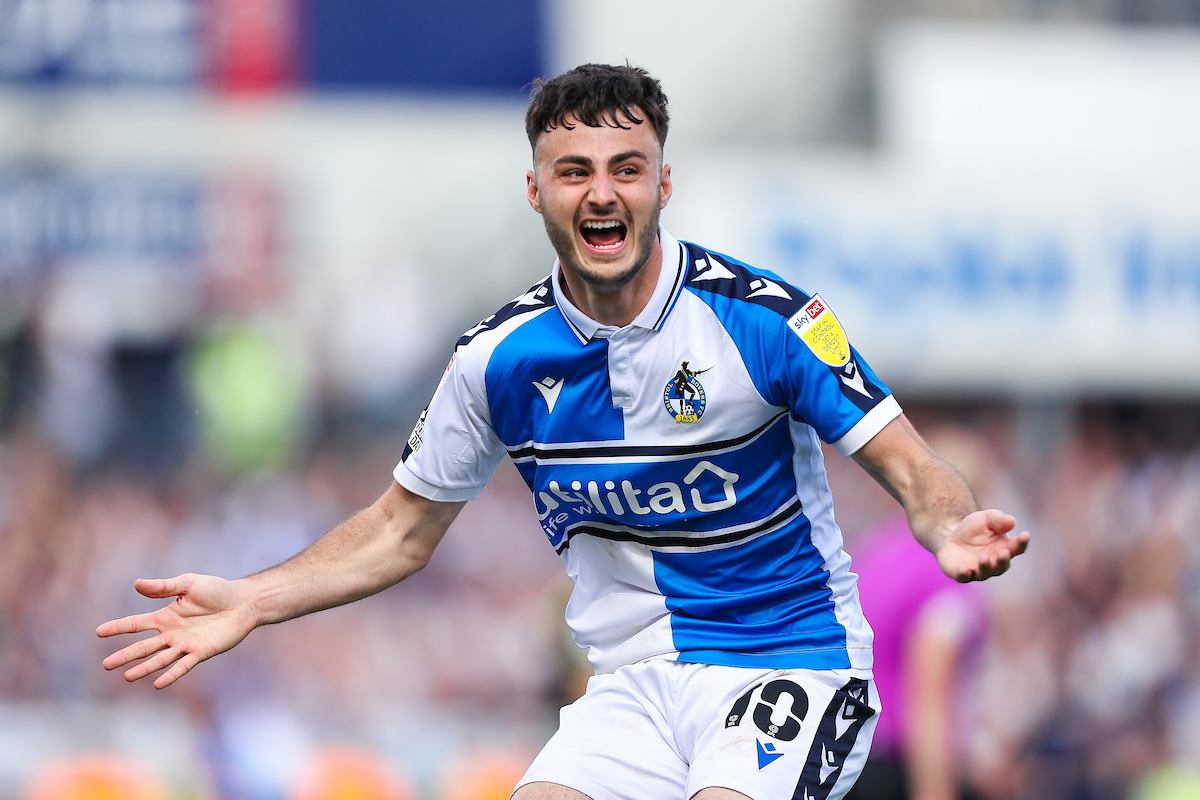 “It’s mad when you stop and think about it. One minute we’re not in the play-offs, the next we’re celebrating with the Gasheads and the gaffer on the pitch after scoring four goals. What’s even more mad is we knew it was going to happen. There’s been a vibe growing at the club, in all areas from training to staff to the gaffer, everyone just ‘knew’ promotion was coming.”

Even the staunchest Rovers fan would have found that hard to believe when the club saw in the new year in 17th position. So, what changed?

“We started slowly, we know that, but the belief was always there. Even with me going my first 18 games without a goal, confidence is never something I won’t have in my game. Obviously, goals help, but I was having to play a different role than I was used to and, once that first goal went in against Oxford, it was almost like someone flicked a switch across the whole club.”

Growing into the number nine role, Collins went from 18 goalless games to grabbing 18 goals in all competitions – although he maintains it’s actually 19, and he got a touch to Sam Finley’s strike at Swindon!

“I set myself a target of 10 at the start of the season, so to get 19, sorry 18, is brilliant. I’m kicking myself for not getting a couple of goals earlier so I could have got over that 20-goal mark.”

In order to give his number 10 even more self-belief, his manager compares him to Bobby Firmino. “I’m a massive Liverpool fan, so to be even compared to him is amazing. The gaffer always said to me that I’ve got to do that number nine role in my own way. I’m not a target man, but I can do things that they can’t. The gaffer kept me in that team. He could have dropped me, but he didn’t. He knew I could do it. Once the goals started coming, it was proving him right.”

Of those goals, the 24-year-old cites the Oxford strike – ‘the best goal I’ve ever scored’ – and the hat-trick goal at Rochdale that sealed a 4-3 comeback win as his favourite goals to date in the blue-and-white quarters. 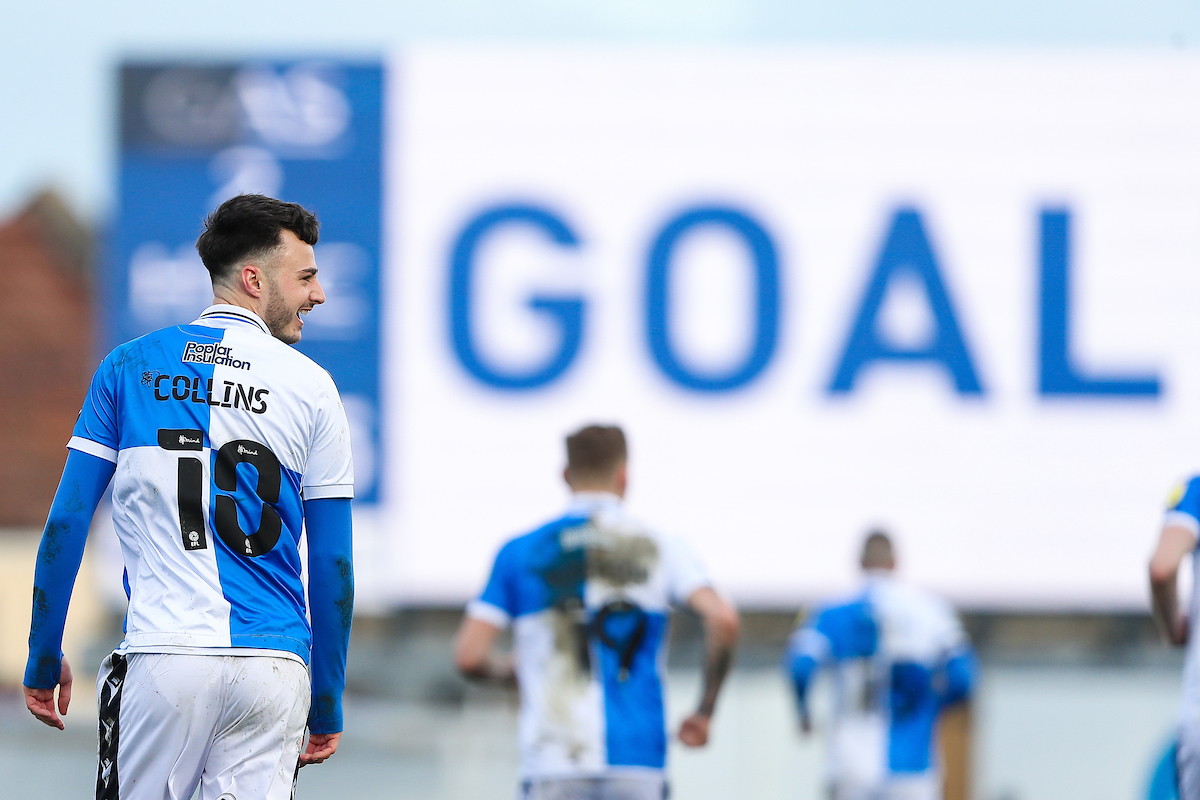 “Grabbing that goal was so important. When we came off the pitch, and saw the other results, it was going to be down to us or Northampton going up on the day. All week in training we were practising keeping calm, scoring a goal and re-setting. We know if we take the brakes off we can steamroll anyone.”

Even going two-up against already-relegated Scunthorpe looked to be in vain as Northampton were three-goals-to-the-good at Barrow, meaning Rovers would need at least six more in the second-half. But then, just before half-time, Barrow pulled one back.

“We didn’t know anything until half-time. We knew it was going to be tough but we just thought ‘let’s go for it’. In the back of our heads all week, we knew it might need to be five, six or seven anyway.

“Then, when I scored my second to make it 6-0, I looked over at the gaffer and he was signalling ‘calm down’ with one hand, but holding one finger up with the other! Then when Billy scored, it was just absolute scenes; to be honest, I don’t remember a lot from that moment on!”

Thankfully for Aaron, there’s plenty of photographs flying around social media to help him piece events together!

“There’s so many photographs and videos I keep seeing; it was an amazing night and it’s been so much fun. This is history. Scoring seven goals like that on the final day of a season to clinch promotion just isn’t going to happen again, anywhere.” 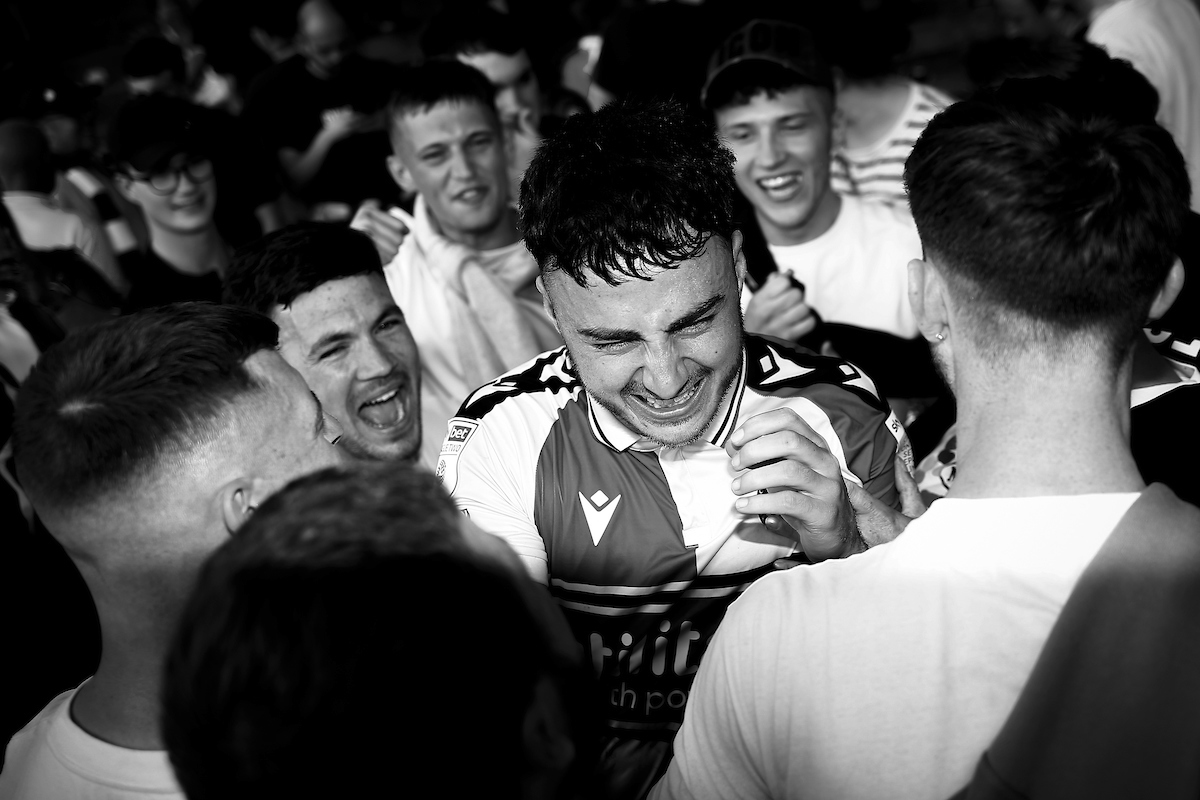 Looking forward to next season, and a return to League One football, Aaron said: “I’m really excited about the new season and all of us just want to keep this going. The club is on the up and I’m so happy to be a part of it.

“I’m setting myself a target of 20 goals – why not? We’re on a roll, we all believe in what the gaffer is doing and, with a couple of additions in the summer, we believe we can go up again. The sky really is the limit. You’ve got to aim high." 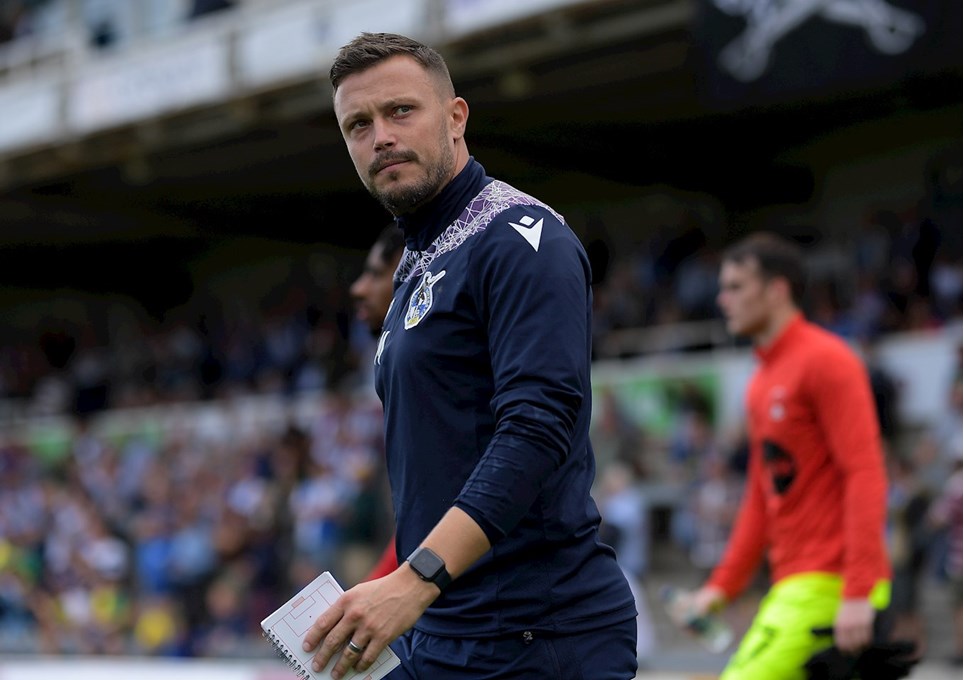 
First-Team coach, Andy Mangan has shared his thoughts ahead of tomorrow's visit of Port Vale. 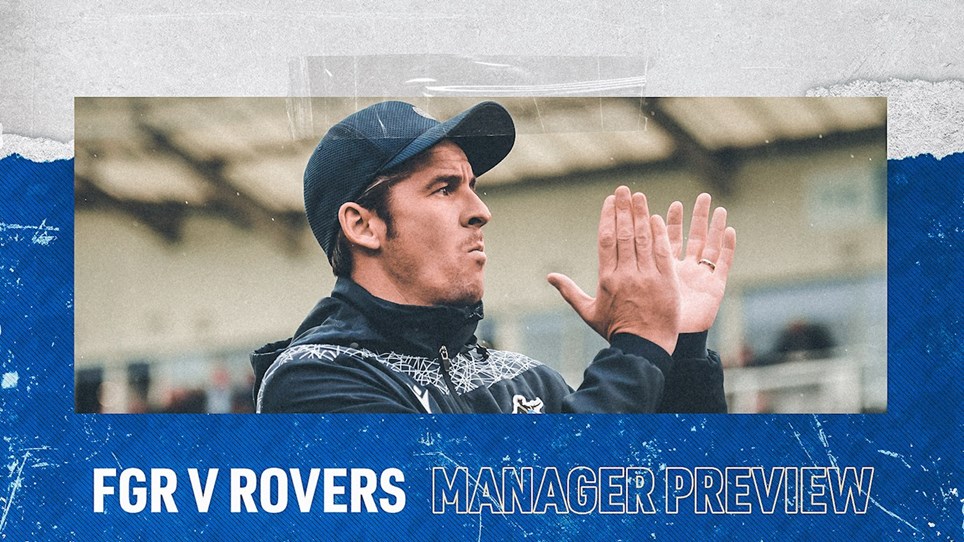 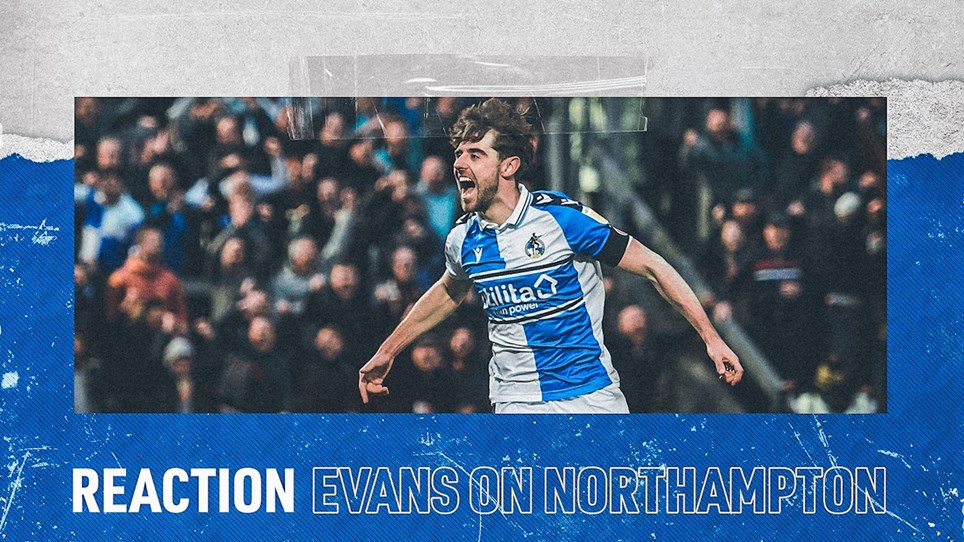 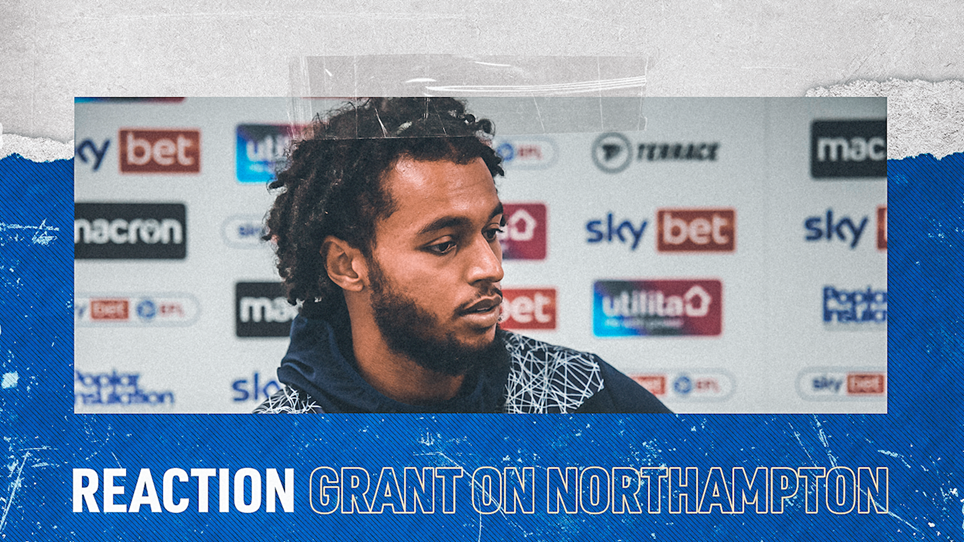