A ninth league goal of the season from Aaron Collins clinched a crucial win at Crawley to fire Rovers to within two points of the play-offs.

Rovers almost gifted their hosts the lead after just three minutes. The usually immaculate Connolly lost the ball but was thankful to see Francomb blaze the early chance over the bar.

Crawley were on the attack again two minutes later, but Nadesan dragged his shot well wide of the upright.

Rovers won a corner after eight minutes after a run from Collins was cleared to Elliot Anderson, whose cross was deflected behind. Evans' delivery was inviting, but cleared. 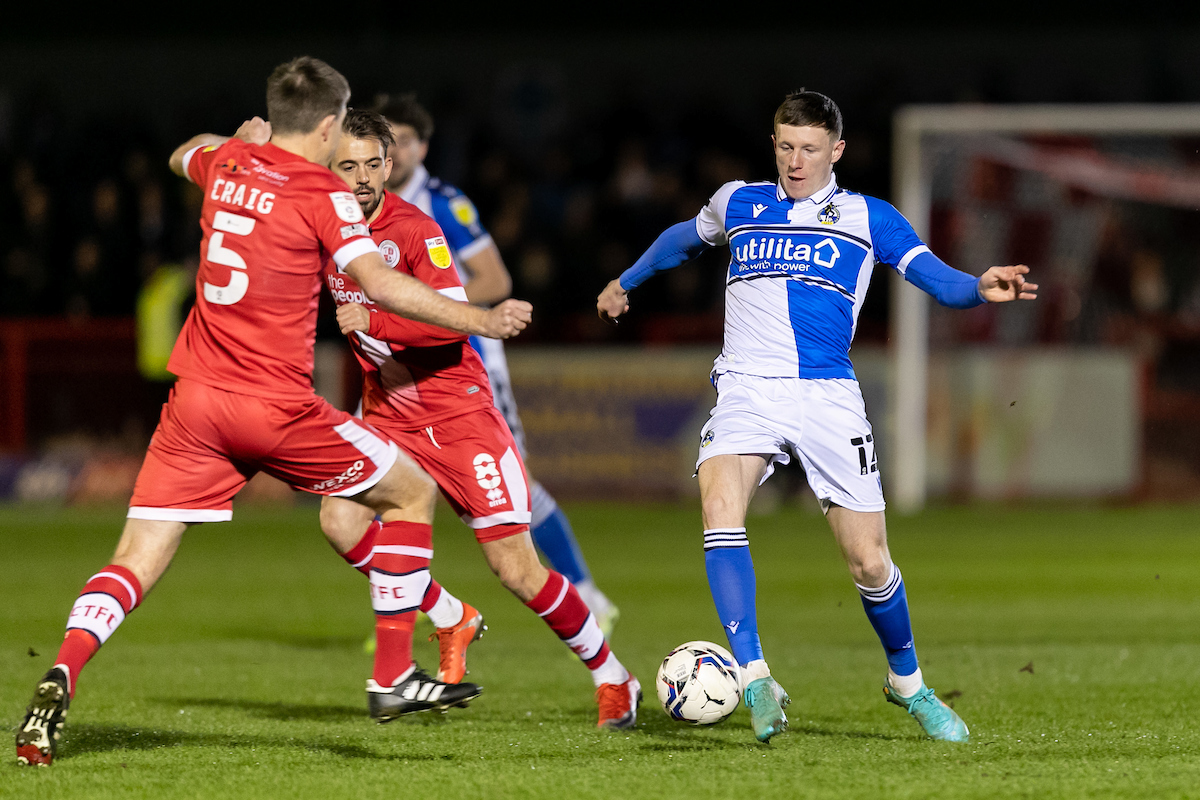 It was an end-to-end affair and Rovers got their first shot on target; Collins' deflected effort was easily gathered by Morris in the Crawley goal.

Brilliant play from Elliot Anderson led to another corner. The ball was cleared to Finley, and he lined up a shot from twenty-five yards that Morris had to claim under his bar.

'Billy' Anderson and his dancing feet were at it again in the 15th minute, with the ball seemingly glued to the midfielder's boots as he dribbled into the box.

A minute later, a Harry Anderson cross was spilled and put behind for a corner. It was all Rovers, but all of a sudden they should have been a goal down. Nadesan broke through one-on-one but Belshaw raced from his goal to save the day.

The stopper was called upon again in the 18th minute, saving with his feet.

Rovers were soon back on the attack and only a fine, low stop from a Harry Anderson shot prevented the Gas from taking the lead in the 18th minute.

The Gas continued to knock on the door and won their sixth corner of the evening in the 24th minute after Sam Finley's driving run was thwarted.

The game was halted in the 27th minute as referee Swabey had picked up an injury. The fans' chants of 'you're not fit to referee' were, for once, perfectly accurate. During the delay, Crawley made a substitution, with Hessenthaler replacing Tunnicliffe. Replacement referee Nicholas Dunn finally restarted the game with a Rovers corner.

The pattern of play resumed; Rovers enjoying the lion's share of possession without really troubling the home goalkeeper.

Antony Evans gave them some respite in the 36th minute by giving away a free-kick on the left. The delivery to the back stick was met by the substitute Hessenthaler, but was straight at Belshaw.

The breakthrough came in the 41st minute. Good footwork in the middle from Evans saw him play through a clearly offside Collins, but the striker sensibly left the ball alone and Harry Anderson was able to latch onto it and fire home for his fifth goal of the season. 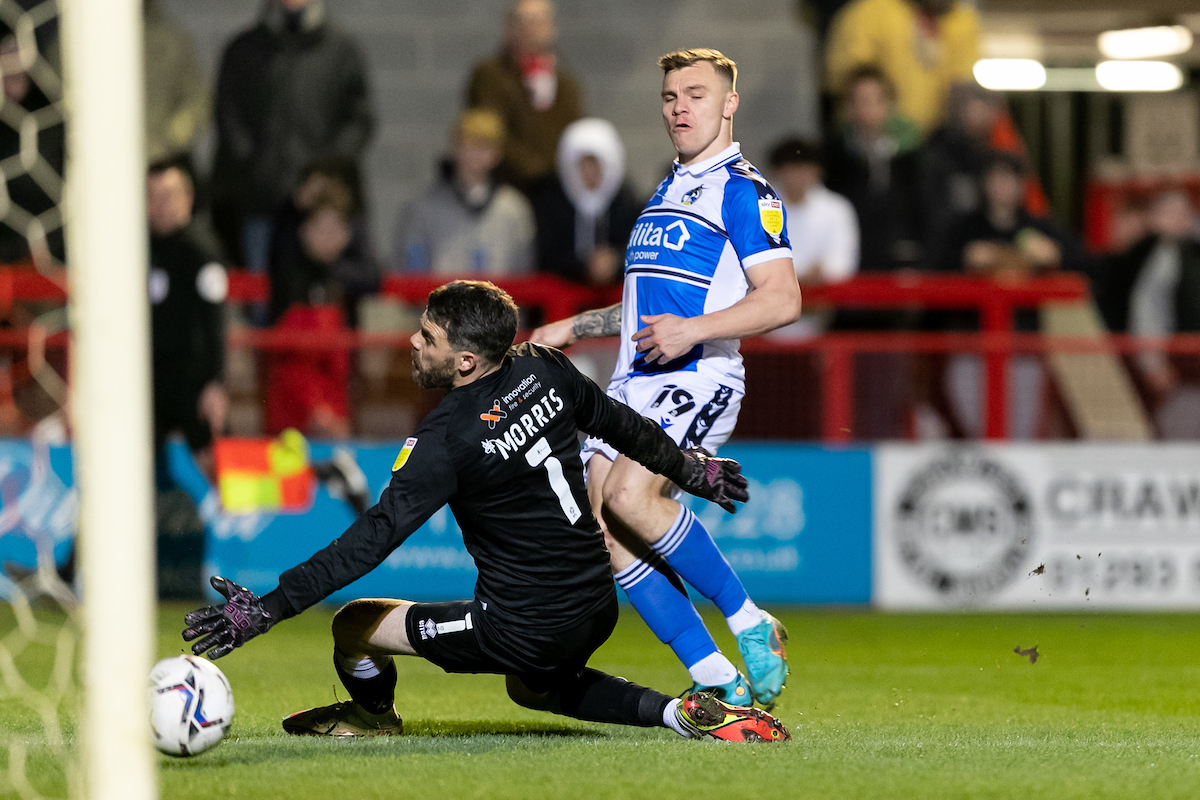 A poor challenge on Nick Anderton led to a second yellow of the evening for Crawley, with Payne the culprit.

There were to be eight added minutes for the earlier delay to proceedings and the home side were screaming for a penalty for handball in the 47th minute, as the ball deflected off Belshaw and onto the arm of Taylor, but nothing was given. Two minutes later, the visitors were indebted to Belshaw again as he raced from his line to clear the danger as Crawley threatened to find an equaliser.

However, the interval arrived with Rovers a goal to the good and having enjoyed 66% possession in the opening half.

Crawley made another substitution at half-time, with Hutchinson making way for top-scorer Appiah.

As the second half resumed, the home side were immediately on the offensive and Belshaw had to be alert to intercept a through-ball, before Nadesan won a free-kick in a dangerous area in the 49th minute.

Powell swung the ball in and Belshaw produced his save of the night from a Crawley header, diving full-length to punch the ball off his line.

The Red Devils were looking a very different outfit and had found an urgency to their play.

From nowhere, Rovers were agonisingly close to a second. A beautiful long ball from Elliot Anderson found Collins, who brought the ball under control before lofting the ball over the onrushing Morris. Unfortunately, his effort dropped onto the top of, rather than into the back of, the net.

It should have been two in the 59th minute, as Elliot Anderson met Hoole's cross at the back post and headed downwards, as all good coaching manuals suggest. Unfortunately, the ball flew up off the turf and over the Crawley bar from all of five yards.

A fabulous early clearance from Belshaw released Finley free down the left; the midfielder raced into the area but couldn't find a Rovers player.

It didn't matter though as, just a minute later, Luca Hoole burst forward and released Aaron Collins with an inch-perfect pass. The striker took a touch before firing low and true into the bottom corner from the edge of the area, to put Rovers two up in the 64th minute.

It wasn't a two-goal lead for long though. Defending a corner with ten men due to Anderton being off the field with a head injury, the unfortunate Paul Coutts got the final touch to make it Crawley 1 Rovers 2.

Hoole then picked up a yellow for an accumulation of fouls as the home side upped the ante.

It should have been two-all from the resulting free-kick, the ball ricocheting off Connor Taylor and out for a corner, with two Crawley players waiting to pounce. The delivery saw Appiah up higher, but his header flew over the bar.

Anderton was forced to launch the ball from his own area to clear yet another Crawley corner in the 78th minute.

Evans looked up and spotted Morris off his line; his thirty-five yard chip sailed harmlessly wide, however.

There were hearts in mouths in the 81st minute as Nadesan burst through the middle, but the offside flag calmed the nerves of Rovers' 556 travelling fans.

Collins gave away a free-kick in the 87th minute but, thankfully, Powell's strike crashed against Belshaw's bar and behind for a goal-kick.

Anderton was on the deck again in the 88th minute, but referee Dunn refused to give a free-kick, much to the annoyance of Paul Coutts.

Harry Anderson took a bit of sting out of the contest in the 89th minute, winning a free-kick, resulting in a booking for Tsaroulla.

Three added minutes were signalled, with Rovers bringing Loft on to replace goalscorer Collins. The substitute's first touch went behind for a goal-kick. Morris desperately launched it forward but Powell gave away a free-kick in his haste as the home side looked to strike late.

Connolly then lashed the ball clear in the 93rd minute as Rovers secured a precious three points on the road.

Next up for Rovers is a home clash with Harrogate in Sky Bet League Two on Saturday 12th March.