Rovers opened their Sky Bet League One campaign with a 2-1 defeat to Forest Green Rovers at the Memorial Stadium.

Both sides warmed up with shirts on to show support for Nick Anderton, who was diagnosed with Osteosarcoma earlier this week.

It was Rovers who settled more quickly after a frenetic opening, with a well-worked free-kick routine ending at the feet of Rossiter, in space on the edge of the box. Unfortunately, the midfielder couldn't open his Gas account on his debut, dragging wide of McGee's right-hand post.

Marquis was next to impress on his debut, harrying and chasing a lost cause to draw a foul. Evans' free-kick was inches away from finding Westbrooke.

FGR were clawing their way back into game, with their pink tiger-stripe away kit inspiring some tough tackles in midfield. Stevenson took matters too far, though, and saw yellow for a foul on Evans.

The away side then sprung into action and Belshaw had to fly high to repel a Cargill header.

The Gas 'keeper was then called into action to save his side on two further occasions to keep out shots from McAllister and Matt.

McGee stopped the Gas from taking the lead in the 34th minute as Harry Anderson connected sweetly with a half-volley, but the FGR 'keeper somehow kept the ball out. From his quick clearance, his side had a chance of their own, but Belshaw flew to his left to keep out a Godwin-Maliefe effort.

The visitors went even closer in the 41st minute as Belshaw was beaten by a low Matt shot but, thankfully, it hit the inside of the post and stayed out. Gibbons then cleared the danger.

The half drew to a close with the visiting side wondering how they weren't winning the contest.

The visitors got us back underway for the second half, attacking the Thatchers end, with 796 travelling fans behind them.

Collins raced onto a long ball in the 48th minute but his cross was too deep for Marquis. 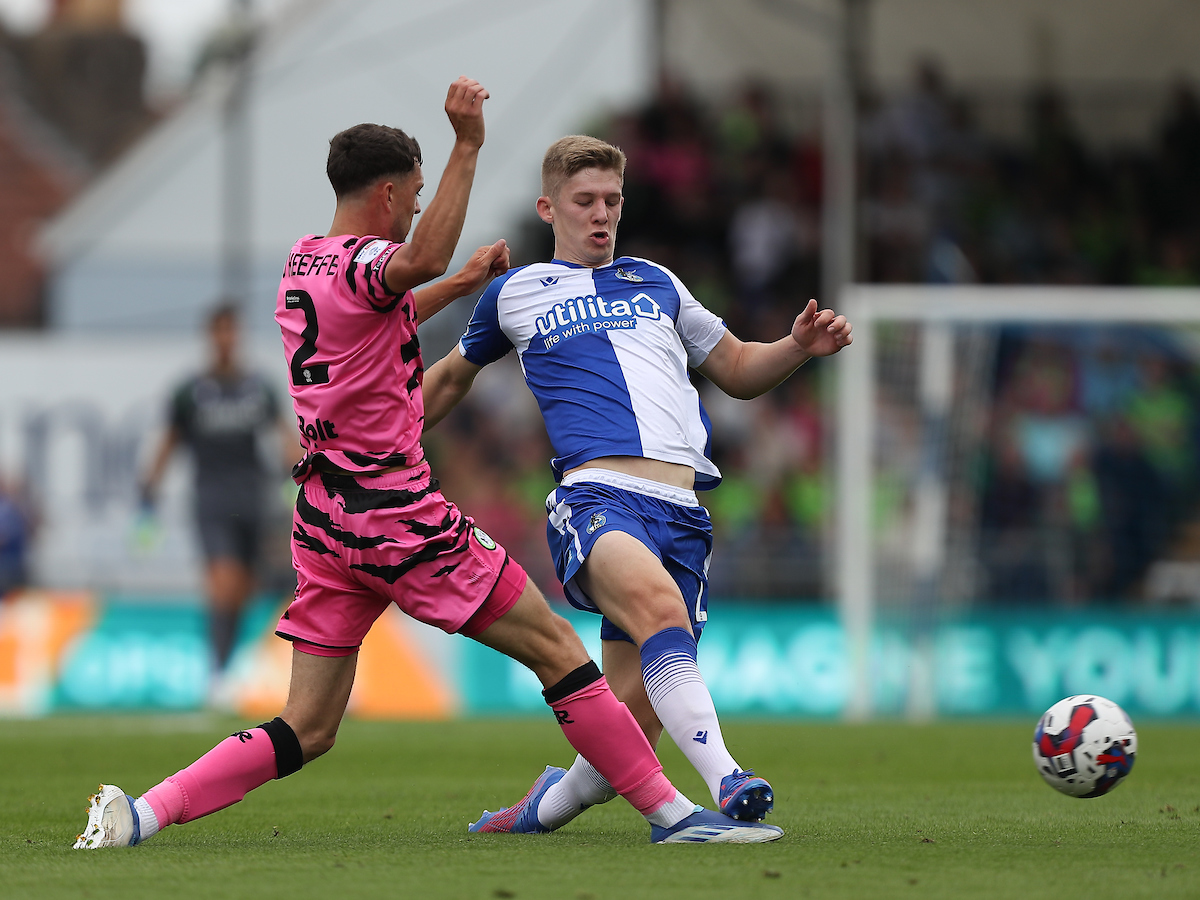 A minute later, Rossiter was penalised for a handball, but Forest Green strayed offside and couldn't capitalise. Connolly then tried a searching ball over the top for Evans but overhit it.

In the 53rd minute, the visitors forced a corner after Gibbons deflected a cross behind. Moore-Taylor rose highest to head home past a sprawling Belshaw and give the visitors the lead.

O'Keeffe saw yellow in the 60th minute for fouling Trevor Clarke as the left-back rampaged down the touchline.

In the 62nd minute, Gibbons was again called into action to block a certain goal, deflecting behind for a corner. 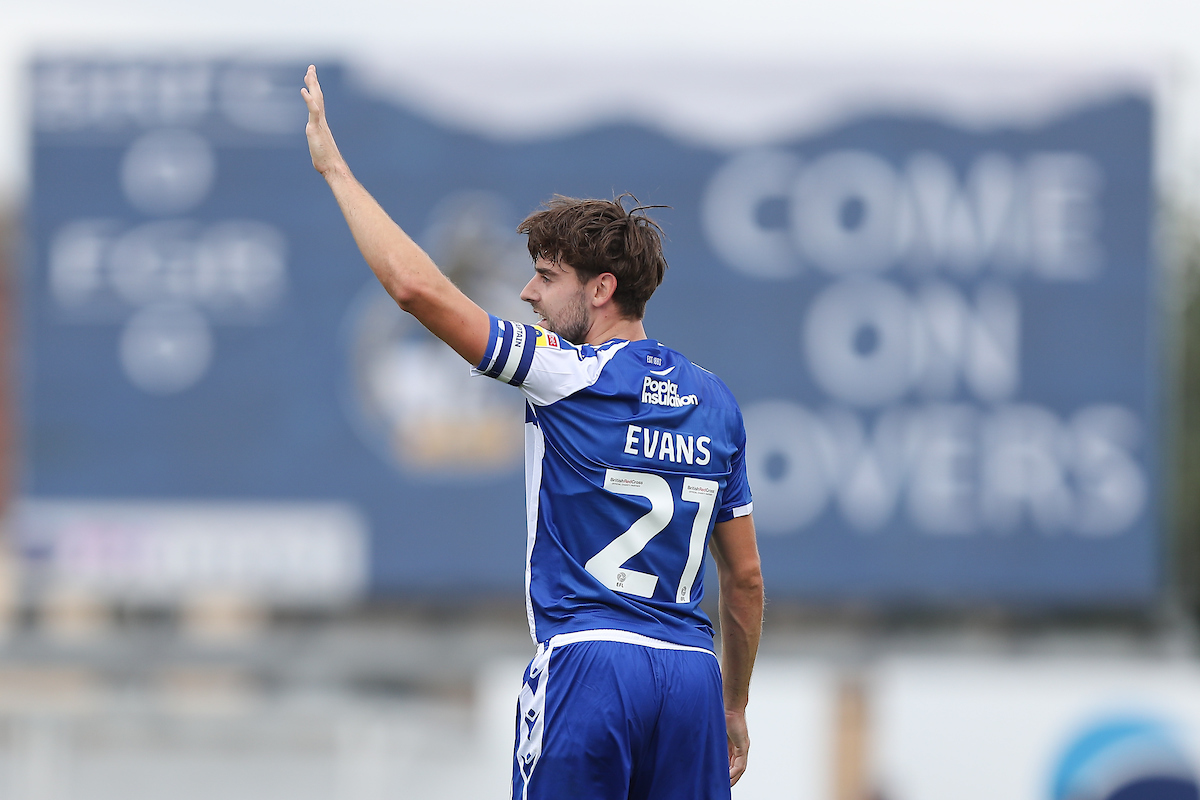 In the absence of Coutts and Finley, captain Evans was trying to rally his troops into action. His pass set up a crossing opportunity for Clarke, but it was blocked for a corner. It was his last action of the afternoon, replaced by Saunders. Westbrooke also departed the scene, making way for Ryan Loft.

It almost brought an immediate equaliser from Saunders, but the ball was scrambled away. A minute later, a great left-footed cross from Gibbons was inches away from Loft.

In the 69th minute, FGR thought they'd put the game to bed, but their goal was disallowed for offside.

They were made to pay for their profligacy a minute later as Collins struck an equaliser for the Gas. Harvey Saunders chased down his own header and crossed for last season's top-scorer to fire home.

Andy Mangan found his way into referee Lewis' book in the 73rd minute as the players had a drinks break whilst FGR goalkeeper McGee received treatment.

The Gas were on the front foot now and Saunders was causing problems with his pace.

Evans saw yellow in the 79th minute for a late challenge on O'Keeffe. Loft was also putting himself about up front as both substitutes continued to change the course of the action.

Great skill from Anderson down the left saw him evade two challenges but Collins was off-balance receiving the ball. A wayward Rossiter pass then almost gifted the visitors a chance in the 85th minute, but Connolly was on hand to clear his lines.

Out of nowhere, Hendry won the game in the 88th minute for Forest Green. He fired a ball out to the left flank, received the return pass and curled beyond Belshaw into the top corner.

Belshaw kept out a goalbound McAllister shot in added time. Matt was booked for kicking the ball away, followed by Cargill for fouling Loft.

That was the last of the action as Rovers began life back in League One with defeat - and a search for an opening day win now goes into a twelfth season.

Next up for Rovers is a trip to Burton Albion on Saturday 6th August for a Sky Bet League One encounter.


A first Rovers goal for John Marquis proved to be the difference in a close contest in searing heat at The Mem. The striker latched onto an Aaron Collins cross to seal the points in the 34th minute. 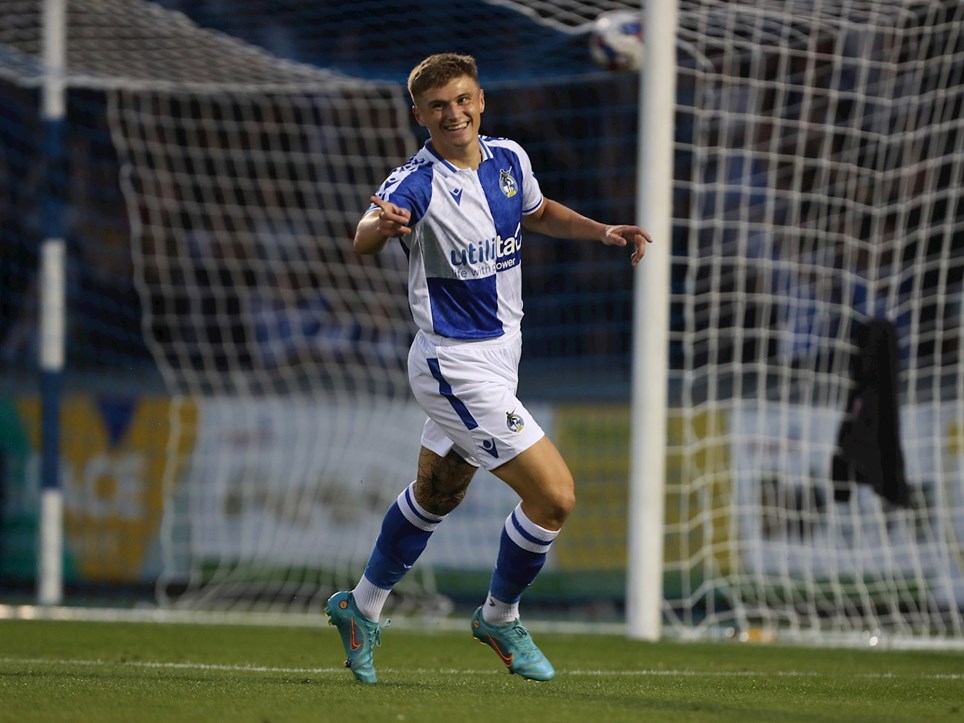 
Rovers' winning return to The Mem!