Dom Telford returned to haunt his former employers as Bristol Rovers succumbed to a 3-1 defeat to near-neighbours Newport County.

Rovers went into the game on the back of a three-match unbeaten run in the league, making just one change; Anderton in for the suspended Harries. Newport kicked off, attacking the Thatchers End, in front of a sold-out away following and soon put the home defence under pressure; Anderton clearing his lines well. 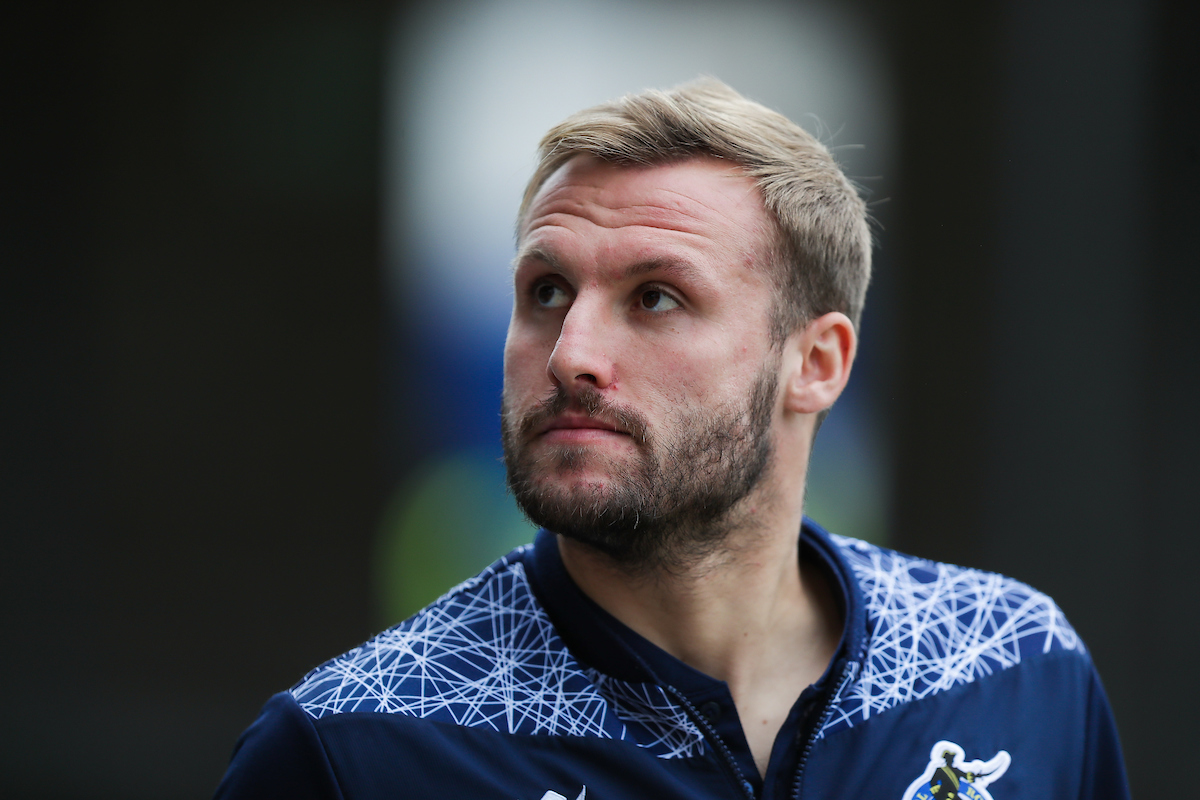 Belshaw was then called into action to gather safely from a dangerous Norman cross as Rovers struggled to exert any authority. County again pressed, but Baker-Richardson crossed wastefully when he had options in the middle. Rovers finally found their way down the left on seven minutes and only a superb tackle from County skipper Matty Dolan stopped Aaron Collins opening the scoring against his old club.

The probing Evans looked to fire the Gas from midfield, but it was the visitors who again threatened on 12 minutes, Baker Richardson firing low and hard to the middle of the goal, but Rovers’ number one James Belshaw saved well with his legs. County went even closer from the resulting corner, Dolan’s header brilliantly headed off the line by Rovers’ skipper Glenn Whelan. Dolan injured himself making the header, and departed the action in the 15th minute, replaced by Finn Azaz. 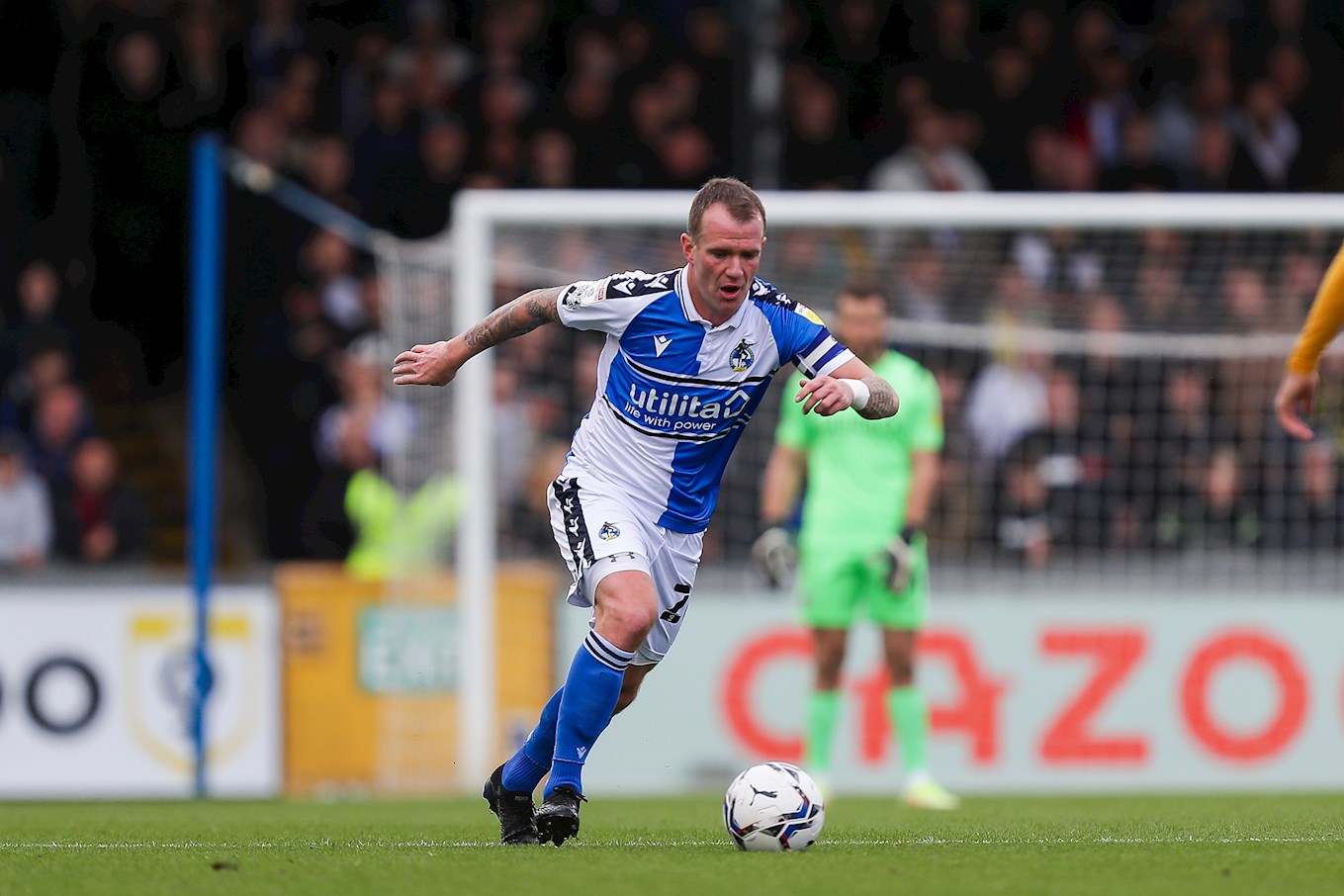 The game continued to threaten to splutter into life, with both sides having some bright spells of possession but flattering to deceive in front of goal. The running battle between Norman and Rovers left-back Nick Anderton was keeping the fans on their toes as the wind began to swirl around the Mem. The Rovers defence then opened up to allow County to take a deserved lead in the 26th minute. Cain was played in by Wilmott, and his cross was slid in at the back post by Courtney Baker-Richardson. The Gas threatened to hit back immediately, but Collins was outnumbered on the edge of the County box.

Disaster then struck after half an hour as Belshaw was too casual with a clearance, which fell straight to Baker-Richardson, who set up ex-Pirate Dom Telford to swivel and fire beyond the Rovers keeper to double the visitors’ lead. Nicholson fired wide after 33 minutes as Rovers still searched to register an effort on target to test the returning Joe Day in the County goal.

Chaotic defending in the home penalty area in the 38th minute saw a County corner find its way to Telford, who looked certain to make it 3-0, but Belshaw made a fabulous save, low down to his right. Rovers then raced away and Collins was hauled down by former Rovers favourite James Clarke, which resulted in the game’s first yellow card

It was end-to-end stuff now, as Evans burst clear but a superb save from Day stopped him from halving the deficit. County immediately went up the other end and Baker-Richardson wasted a chance to extend the Exiles’ lead. Out of the blue, in first-half injury-time, Brett Pitman turned beautifully and fired high into the top right corner of Day’s net, giving him absolutely no chance. 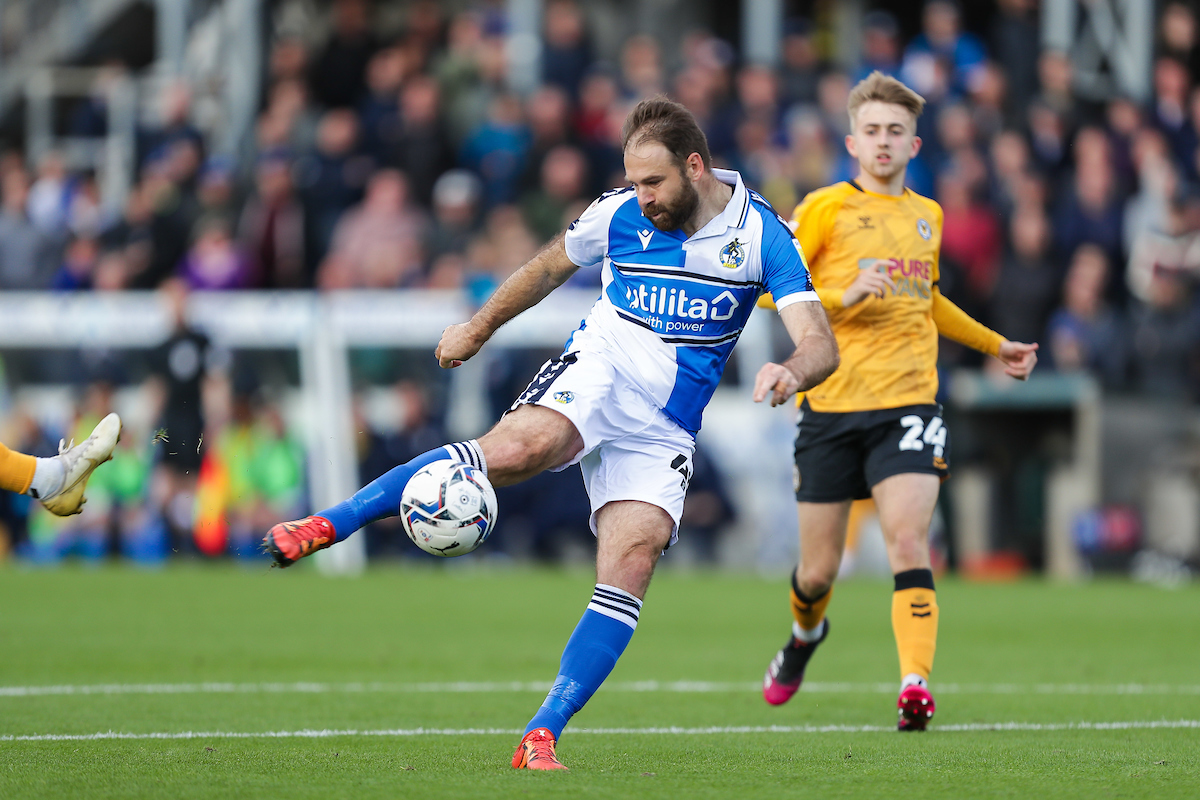 The second half got underway with Collins immediately looking to get Rovers back on level terms down the left, but the frontman was adjudged to have fouled Norman. Rovers kept up the increased urgency and a fine Anderson cross was sweetly met at the near post by Pitman, whose first-time volley flashed past Day’s left-hand post.

Belshaw was then called into action to stop an Azaz drive low to his left as the game already looked stretched. Luke Thomas then raced down the right, cut inside, then again, before setting up Nicholson, who failed to hit the target from ten yards. Pitman then nearly put Thomas through again, but his inviting through ball was cleared by Day, before the Rovers number 40 then won a corner on the right. 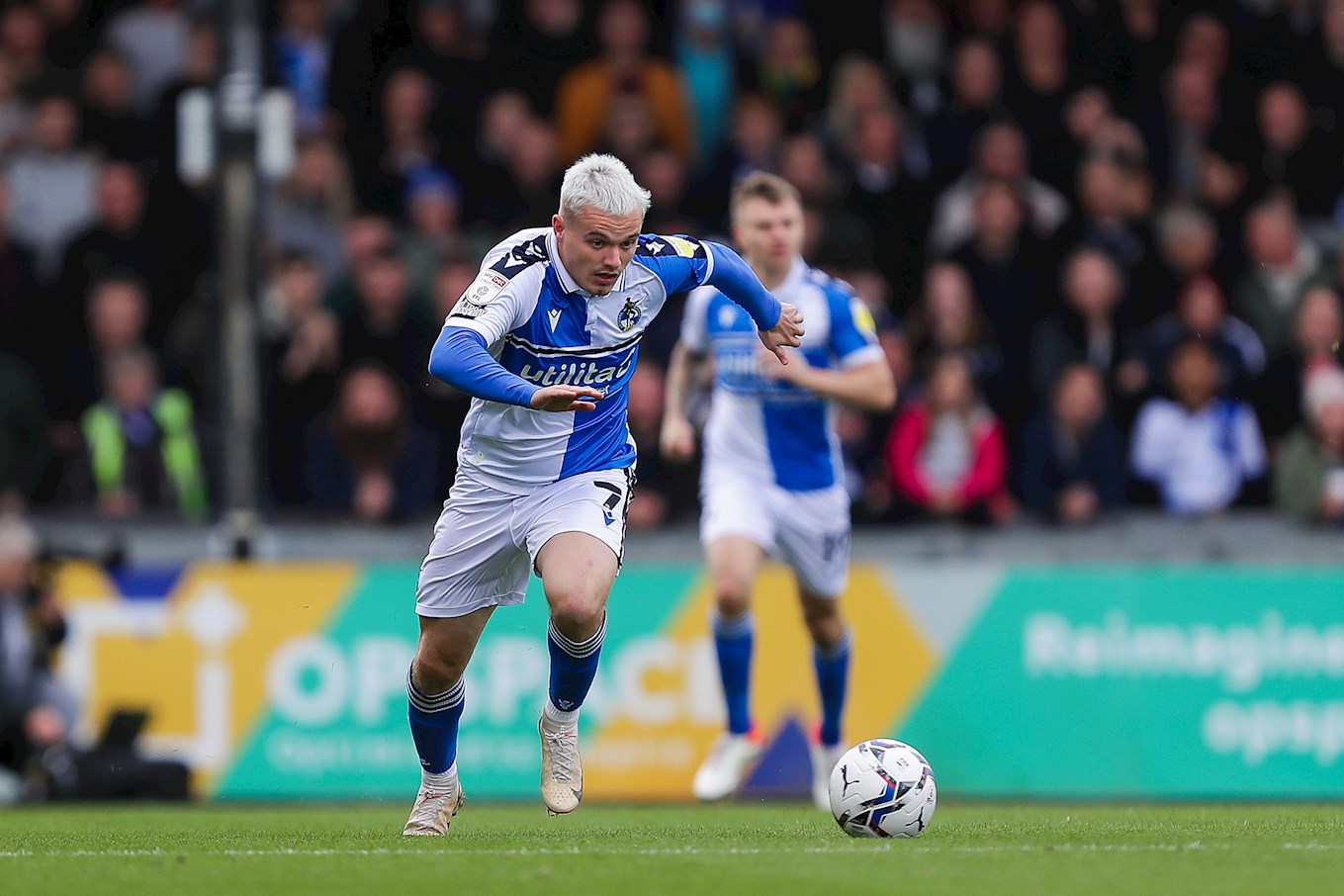 It was all Rovers now and Norman could count himself fortunate not to have seen a yellow from Mr Oldham, after pulling back Nicholson. Rovers then lost possession down the left, Telford finishing from close quarters after tricky play from Azaz to make it 3-1 to County in the 61st minute.

Sam Nicholson showed his marker a clean pair of heels as Rovers tried to get back in the game once again, before Evans fired over Day’s bar. A triple change for the Gas in the 69th minute saw Westbrooke, Coutts and Finley replace Collins, Anderton and Whelan. The advancing Evans was cynically brought down by Wilmott, leaving the referee little option but to brandish a yellow card. County’s Lewis was then lucky to escape a caution of his own after diving to try to win a free-kick. 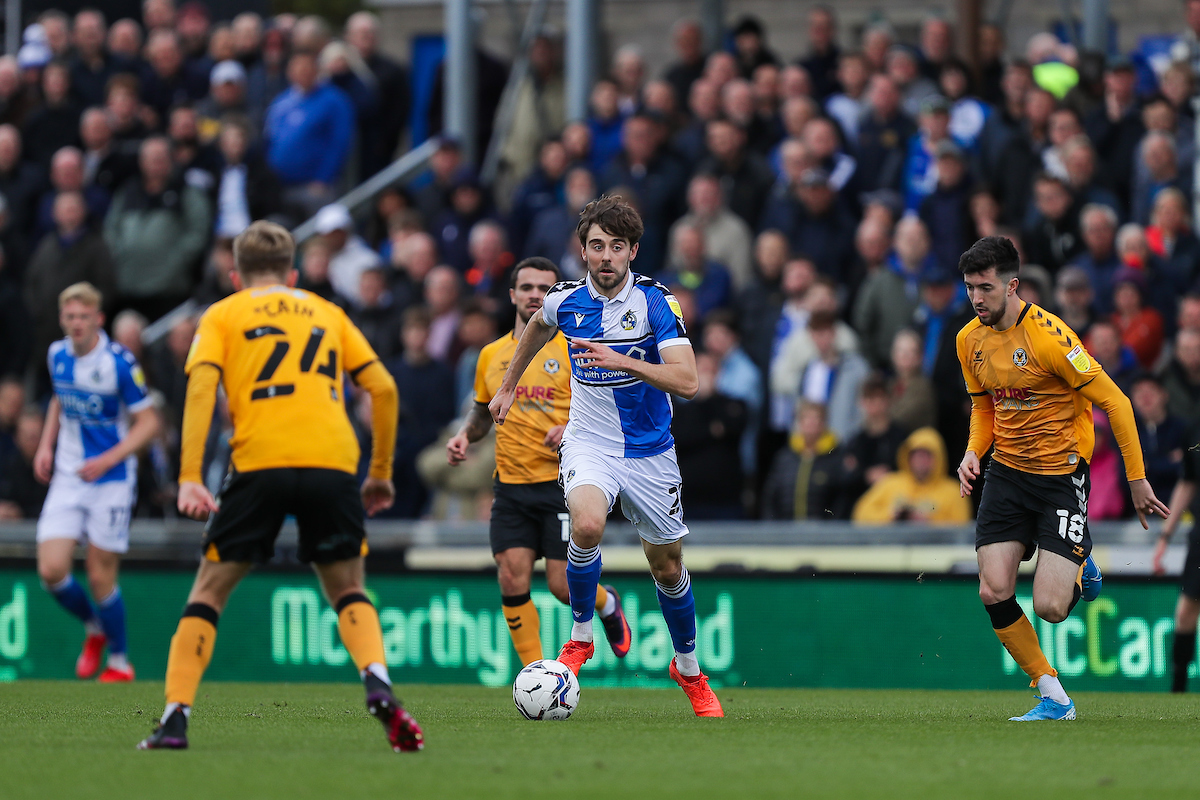 The Gas won a corner in the 77th minute, Kilgour rising at the far post to test Day with a header. Telford’s afternoon was over in the 79th minute; County’s two-goal hero replaced by the 42-year-old Kevin Ellison. Finley and Baker-Richardson both saw yellow for a shoulder barge off the ball apiece and players from both sides surrounded the offenders. It was to be the County man’s last action though, as he was replaced by Timmy Abraham.

The striker should have added a fourth in injury-time, as he was put clear on goal as Rovers made a hash of a throw-in, but he ran the ball out of play. Not content with that, he then broke free again right on the whistle but chipped harmlessly over Belshaw’s goal.