Rovers hit four to claim three points against Accrington at the Mem.

Nicholson and Westbrooke added to Rovers’ goal tally in the second half, as the Gas turned a dominant display into three points.

Leahy’s goal showed both determination and composure, as he broke into the Accrington area to latch onto Westbroke’s ball over the top to lift a finish over Savin in the visitor’s goal.

Rodman staked his claim for the goal of the season award with a worthy contender just before the break, with the winger’s curling effort doubling the Gas’ advantage in first-half stoppage time.

Joey Barton’s team continued to create chances in the second half, with Jonah Ayunga’s forceful effort pushed onto the upright.

While the Gas continued to build chances, they were also successful in limiting the away side to any credible openings.

Two goals in two minutes from Nicholson and Westbrooke were a just reward for a pleasing display from Barton’s side, Nicholson curling home an effort from the edge of the area, while Westbrooke showed composure to finish from close-range following McCormick’s low delivery across goal.

Accrington pulled a goal back through Paul Smyth, but Rovers managed the final 15 minutes to preserve their three-goal lead.

The win lifts Rovers out of the bottom four, ahead of meeting at home against AFC Wimbledon on Saturday. 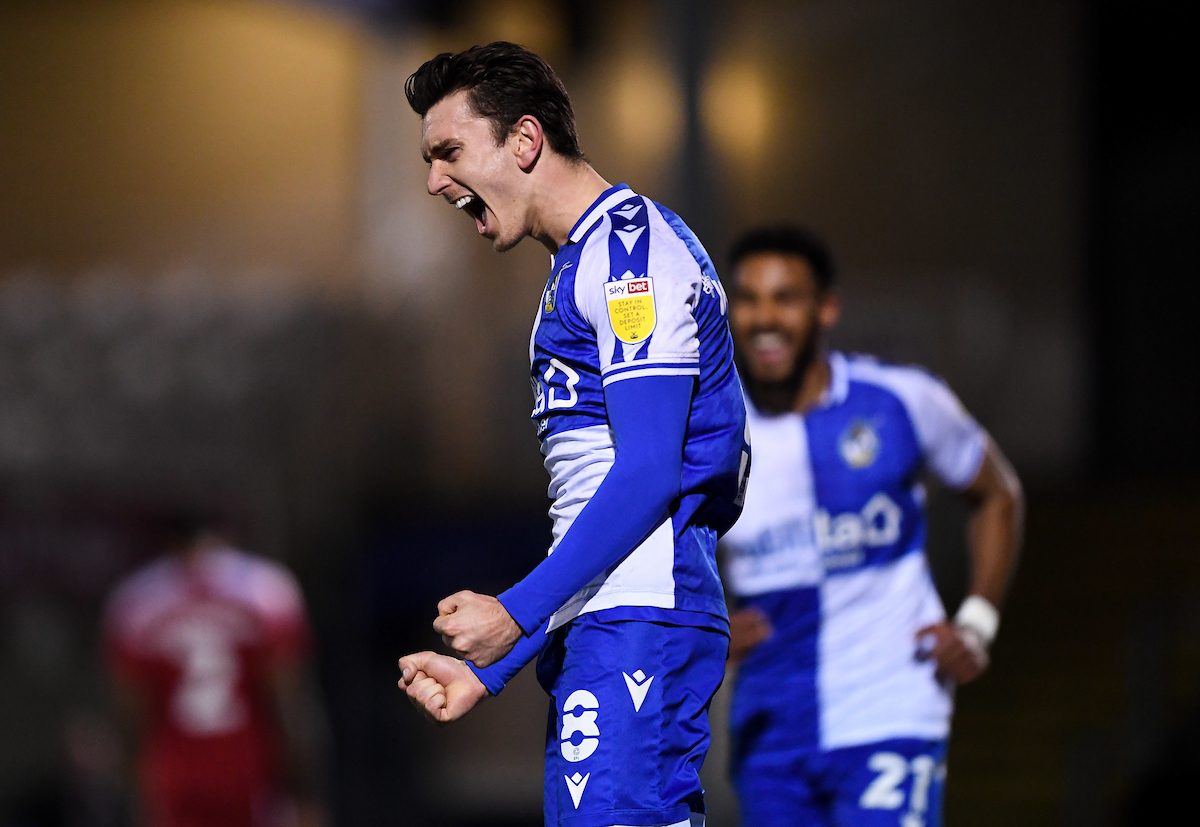 Play-off chasing Accrington Stanley headed to Mem with an unbeaten streak against Rovers stretching back to ten games. John Coleman’s side had found the net first in 5 of the last seven meetings against Rovers, with their last trip to the Mem ending in an entertaining 3-3 draw.

Rovers last three-point haul against Tuesday’s opposition came in a 5-1 win at the Mem back in April 2012. On that occasion, it was two goals apiece from Matt Harrold and Matt Lund and a superb volley from Andy Dorman that helped the Gas to victory over an Accrington side that was then managed by Paul Cook.

The Gas were looking to add to the 16 points gained at home so far this season, building on the three points added in their last fixture at the Mem against Shrewsbury Town.

James Bell was the man in the middle for the encounter. He had previously officiated Rovers’ 0-0 draw away at Wigan earlier in the season, with the referee handing out 22 booking and 3 red cards across his eight matches this season in the third tier. 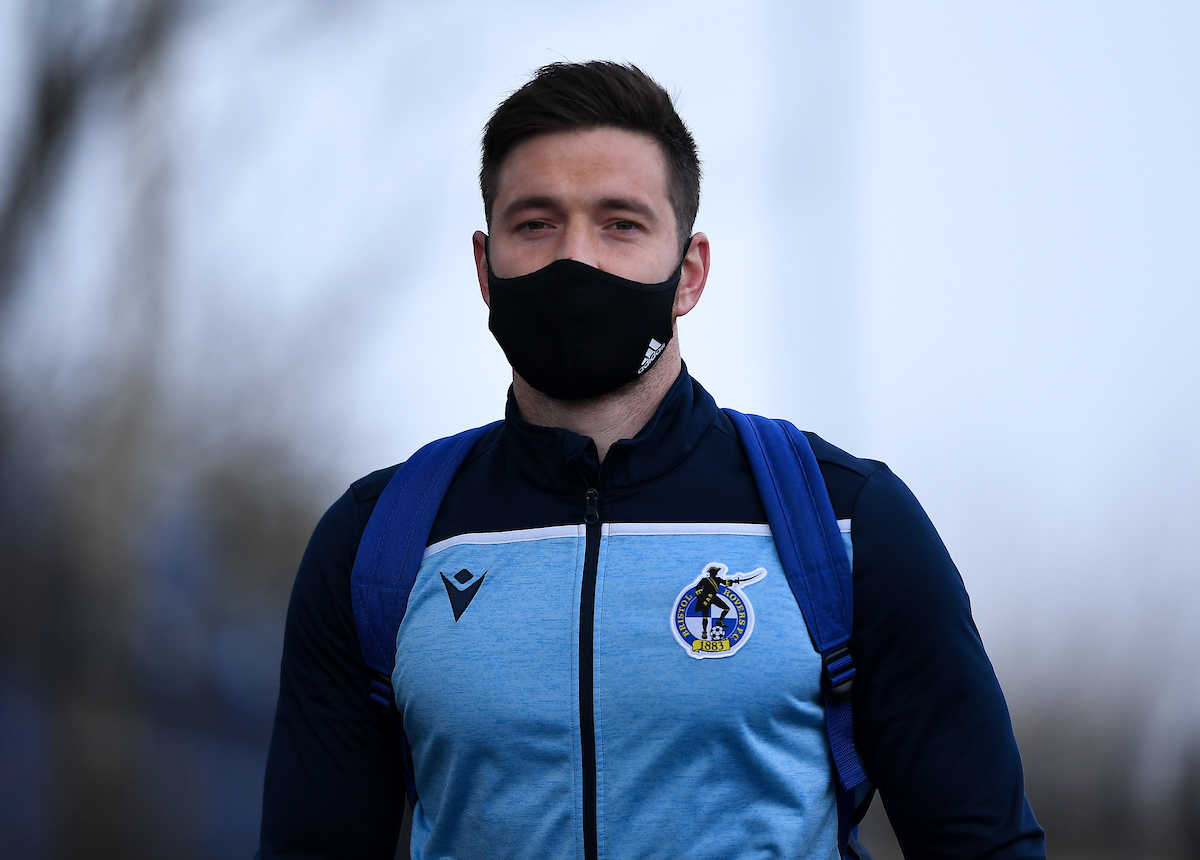 Ahead of kick-off, Rovers Manager Joey Barton opted to make four changes to the Rovers side from Saturday’s defeat at Hull City.

Luke McCormick returned to the starting XI after the midfielder served his one-game suspension for his dismissal at Burton Albion on the weekend at the KCOM Stadium.

Josh Grant, who has played over 2,500 minutes so far this term, missed out on selection due to the injury that forced him off in the first half at Hull on the weekend, with Ed Upson drafted in as a like for like replacement.

The further changes saw Jack Baldwin enlisted into a back three for the Gas, playing alongside George Williams and Alfie Kilgour.

There was a spot in the starting XI for Jonah Ayunga, with the striker replacing Brandon Hanlan for his first start since our trip to Gillingham.

Hanlan started the encounter on the bench, with further attacking options in the shape of youngster Zain Walker and forward James Daly.

The visitors handed David Morgan his first start since his move in January from Southport, with all six of his previous appearances coming from the bench.

The early changes both sides took a cagey ten-minute spell to settle into the game. An early shot from Sam Nicholson was the first opportunity of the evening registered, as the winger twisted and turned his way to the edge of the Accrington area to fire a curling effort into the hands of Toby Savin.

Rovers settled the quickest into the game and found the encounter’s opening goal in the 15th minute when Luke Leahy completed a swift transition move for the Gas. It was a smart chipped ball over the top from Westbrooke that set Leahy through on goal, with the wing-back doing well to keep his balance and composure to lift a finish over the onrushing Savin to add his 8th goal of the season to put Rovers ahead.

The spell that followed Leahy’s goal witnessed smart management by Barton’s side, who deployed a resolute shape to limit any openings for the away side, with the majority of play taking place inside the Accrington half.

Rovers had plausible chances to add a second goal, with Westbrooke’s high free-kick into the Accrington area split by Savin, with the ball edged towards the target from one of the blue and white shirts inside the congested penalty area. With Savin stranded, Michael Nottingham was on hand to hook the loose ball clear in the goalmouth to lift the danger for the away side.

Accrington fired a warning side for the Gas with their first opening of intent. Paul Smyth darted inside the Rovers area and hit a low effort that sprung back off the foot of the upright, as the away side looked for an equalising goal.

With ten minutes of the first half remaining, there a moment of contention as Nicholson was tripped by Ben Barclay when attempting to break through on goal. It looked like the Accrington man was the last defender, but the referee deemed the challenge only worthy of a caution.

Zain Westbrooke was tasked with taking the set-piece that followed Barclay’s infringement and aimed a useful looking delivery to the far-post that swung just out of the reach of Baldwin and Rodman, who had angled runs to the back stick.

Rovers added a second goal in first-half stoppage time to give a solid foundation for the final 45-minutes. The move saw Ed Upson recycle play on the fringes of the Accrington area, sliding across the ground to shape a pass towards Alex Rodman. The winger took a touch to drive inside the Accrington area and fashioned a curling effort with venom that swung across the face of goal and into the top corner to give Rovers a two-goal lead at the break. 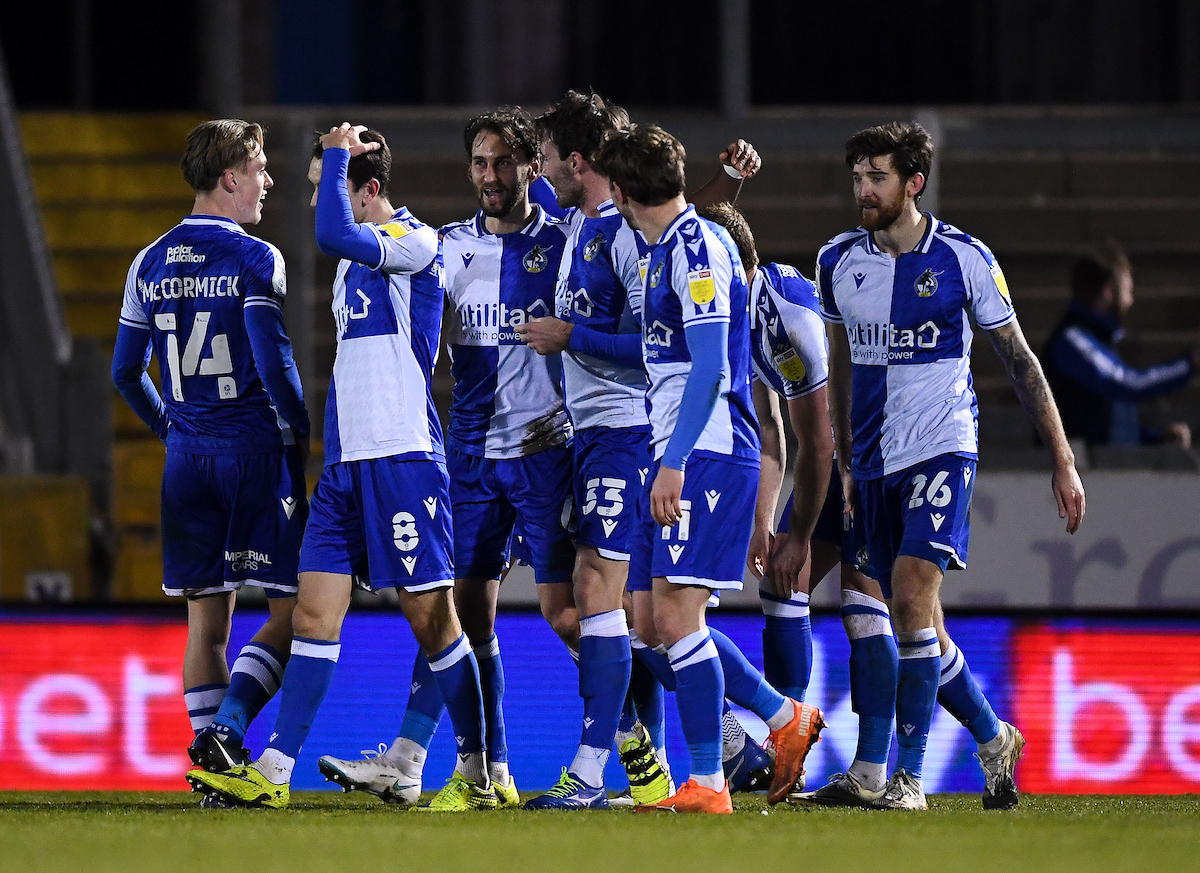 After the restart, the away side showed a renewed intensity in an attempt to reduce Rovers’ lead. Michael Nottingham cultured a low cross that bobbled across the six-yard area, with Alex Rodman doing enough to warn off the run of Russell at the far post.

Rovers looked threatening every time they burst forward, with Jonah Ayunga proving to be a handful for the Accrington defenders. The striker showed neat footwork to craft a self-made opening in the early stages of the second half, with a powerful strike from the forward tipped onto the upright by Savin.

Ayunga carried on his threat in the final third and again forced Savin into action to keep out a low effort that looked destined to cushion inside the bottom corner.

The third goal felt like it would be a key goal to secure and it fell the way of Rovers in the 67th minute, in what the performance of the Gas deserved. The goal came via Sam Nicholson, who took full advantage of a Rovers break into the final third to jinx the ball onto his right boot to curl an effort beyond Savin from 20-yards out. 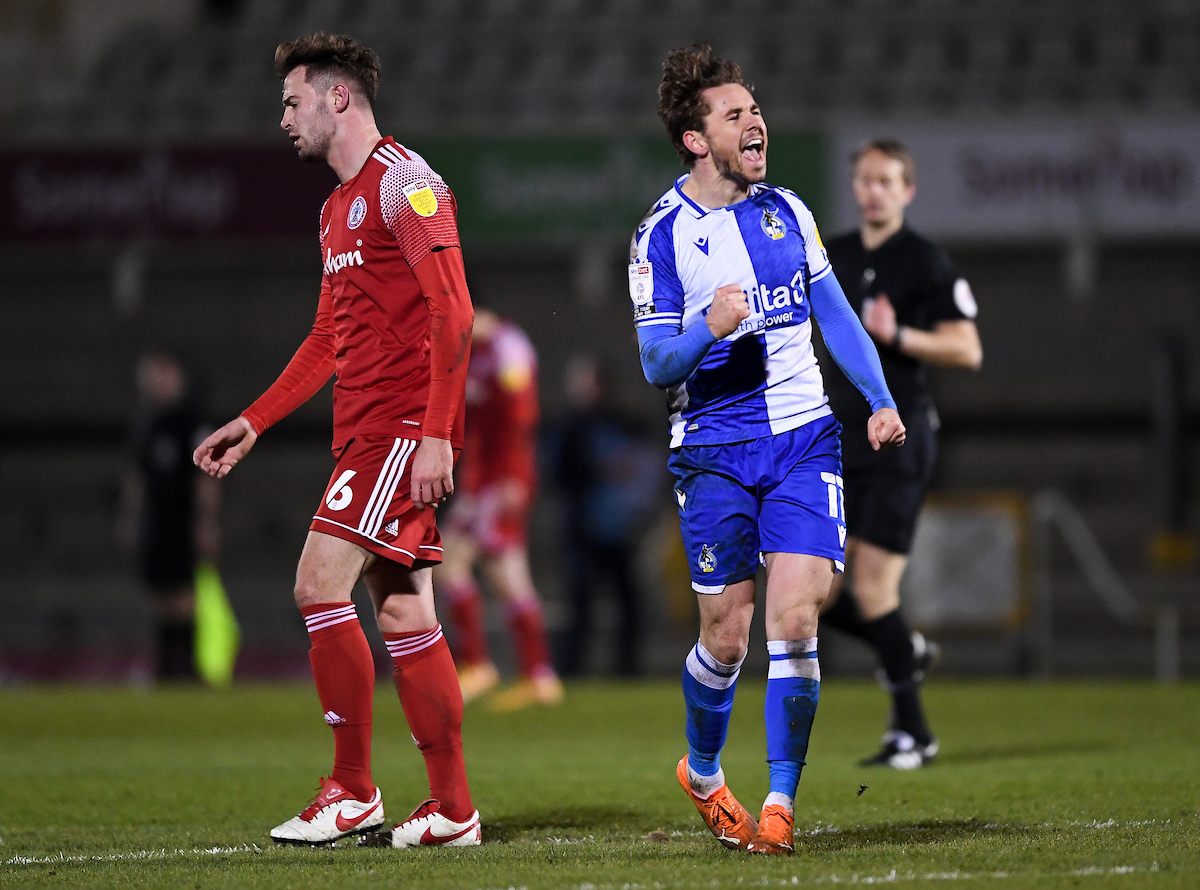 Two minutes later, Rovers added a fourth goal with a sweeping move that caught out the visitors with its sheer pace. McCormick orchestrated the move, darting down the left flank after being found by Nicholson. The Chelsea loanne managed to get to the byline before picking out an inch-perfect cross to find the run of Westbrooke at the far-post. With Savin out of the equation, Westbrooke was met with several Accrington defender’s on the goalline, but the midfielder’s strong effort soared into the back of the net.

The away side managed to get a goal back through Paul Smyth, who fired in a low effort from close-range to dent Rovers’ four-goal advantage.

Alex Rodman had a further opportunity to add to his tally with an effort from range that rocketed off the upright, in what would have been a sensational strike if it had swerved just inches to the left.

In the final ten minutes, Rovers had a strong penalty appeal turned down when substitute James Daly collided with Savin inside the Accrington area and the home side managed the late moments to preserve the points on offer. 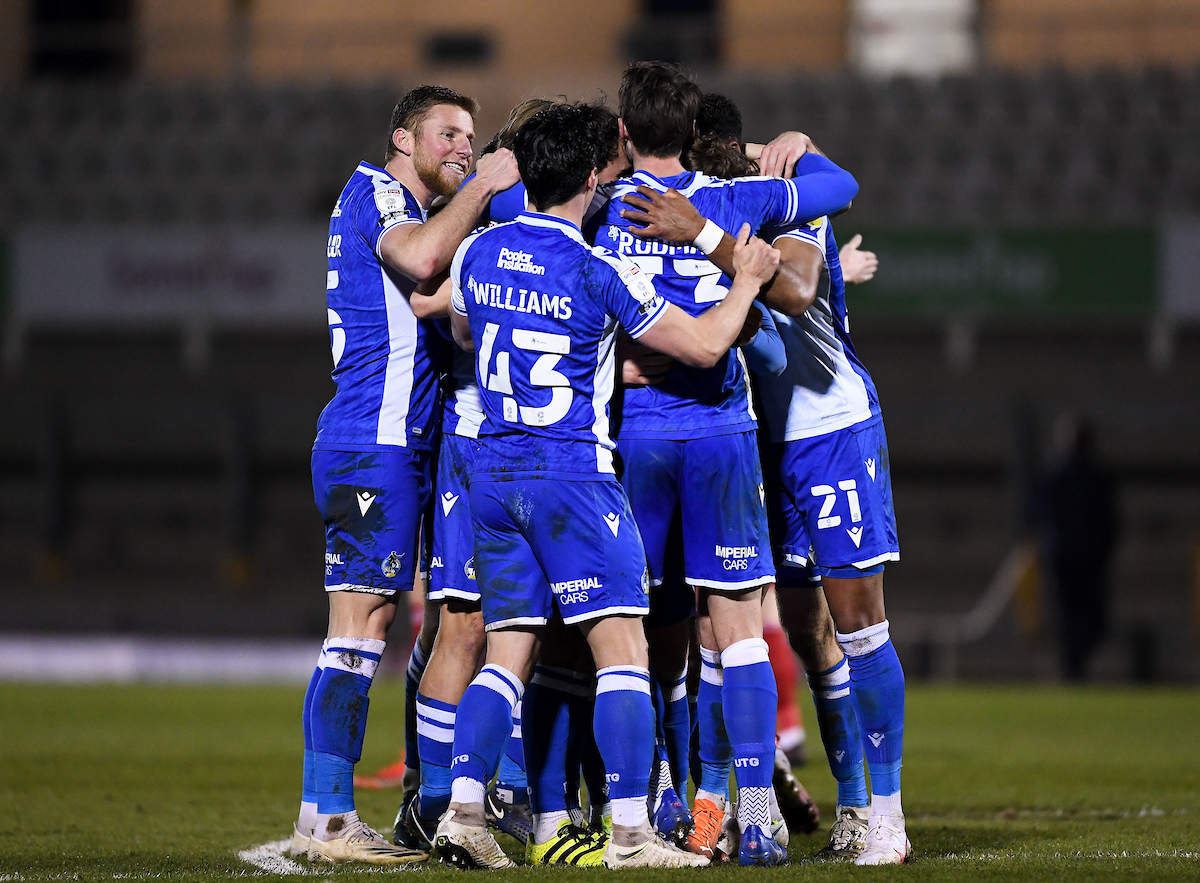