The Gas are defeated by Rochdale at the Mem...

An early kick in the teeth stung the Gas as Newby knocked home at close-range, before Luke Leahy rocketted a first-time volley into the top right corner from a lofted Ehmer cross.

However, it would be Newby who would respond with the knock-out blow, weazling his was into the box from the right flank and firing low under Joe Day.

Paul Tisdale opted for two changes to his starting eleven as the Gas returned to the Mem after three away fixtures on the bounce.

Josh Grant dropped to the bench, replaced by Zain Westbrooke in the heart of midfield, while Cian Harries replaced Jack Baldwin at the back. 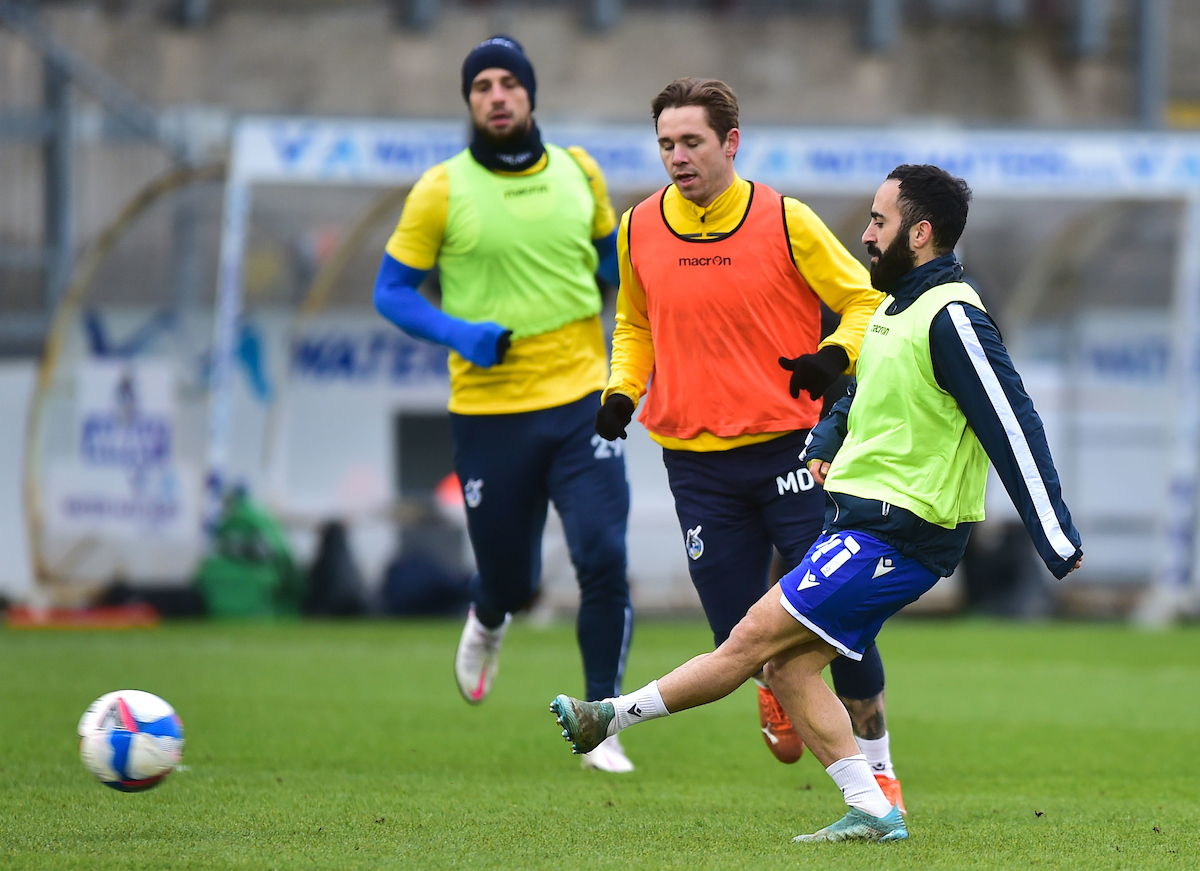 Rovers hit the ground running, spurred on by the newly introduced virtual mascots on the big screen, produced the first half-chance of the game. George Williams neatly worked himself into some space on the right flank before drilling a pass across the ground into the area, Oztumer arrived at it first but saw a vital toe from a Rochdale defender take the strike wide.

Gabriel Osho made a vital block for Rochdale on his return to the Mem following a brief spell on loan here from Reading. Oztumer would pick Hanlan out at a sharp angle deep in the area, with the number 9 controlling before striking on goal. It looked destined for the far post but Osho got across well to block it wide. 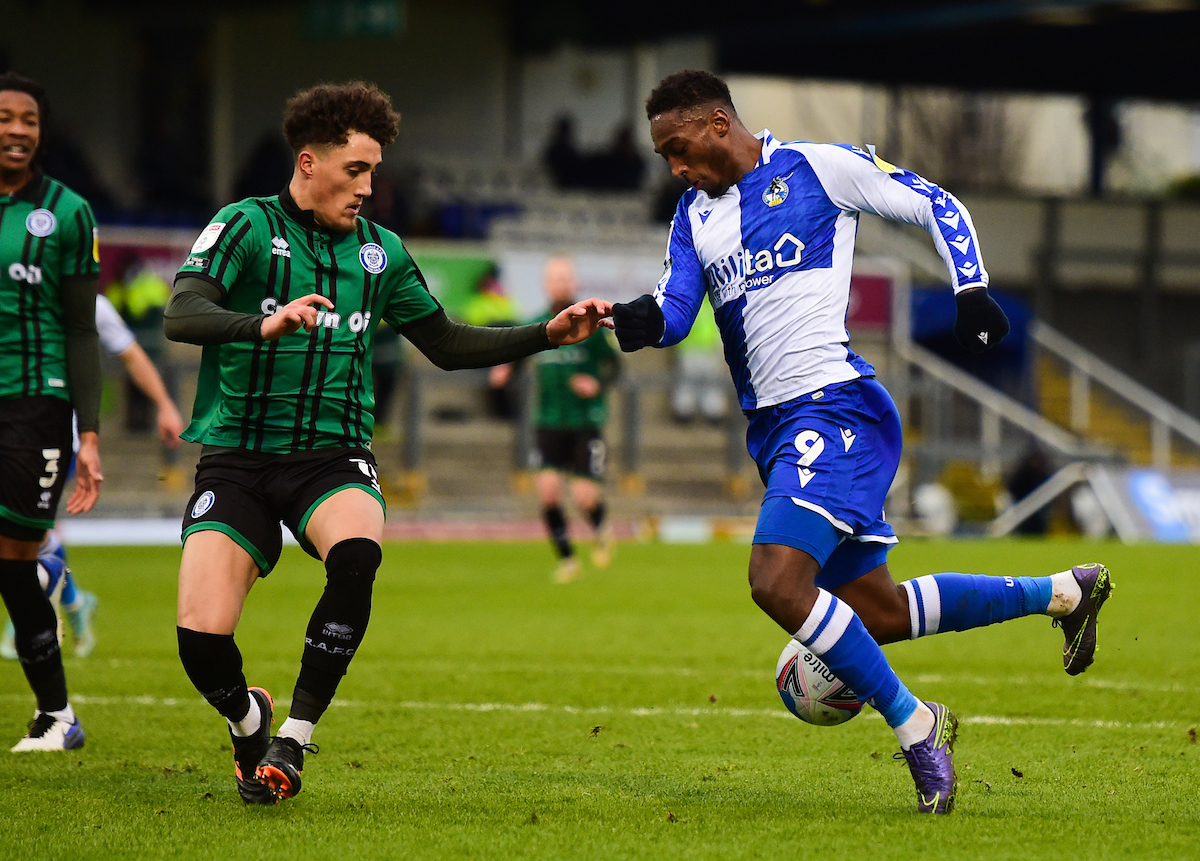 From the resulting corner the Gas went close again, Luke Leahy rising highest to connect with another excellent Oztumer ball. The left-back bellowed in frustration, after seeing his header deflected narrowly wide of the post.

Despite all of Rovers' early pressure, it would be Rochdale who took the lead. A corner, Dale's first of the game, came in towards the front post where Matty Lund connected sweetly to divert across the face of goal. There, Alex Newby hovered, able to poke home from unmissable range to take the lead.

Luke Leahy delivered a superb ball looking for a leveller on the 20th minute, swerving low towards Brandon Hanlan who planted a strike at the near post with his right foot first-time. It didn't trouble Bazunu thought, going wide of his right stick.

Rochdale looked to hit a second on the counter, driving forward and prodding a ball to Alex Newby on the right side of the area. He struck a low ball into Matty Lund who dinked it just wide of the left post.

A Jimmy Keohane delivery from the right flank looked to create Rochdale another opening, but as the forwards rose to compete, the ref' blew his whistle for a push on Williams.

As the game struck the 35th minute, the Gas found the key to unlocking the Rochdale defence. A neat dink from Sam Nicholson forced Rochdale into giving Max Ehmer the time on the right to select his target in the box. At the far post arrived Luke Leahy, who latched onto a superb Ehmer ball to rocket a first-time finish into the top right corner. No sooner had Bazunu seen Leahy connect with it before it had found the net, a lightning strike. 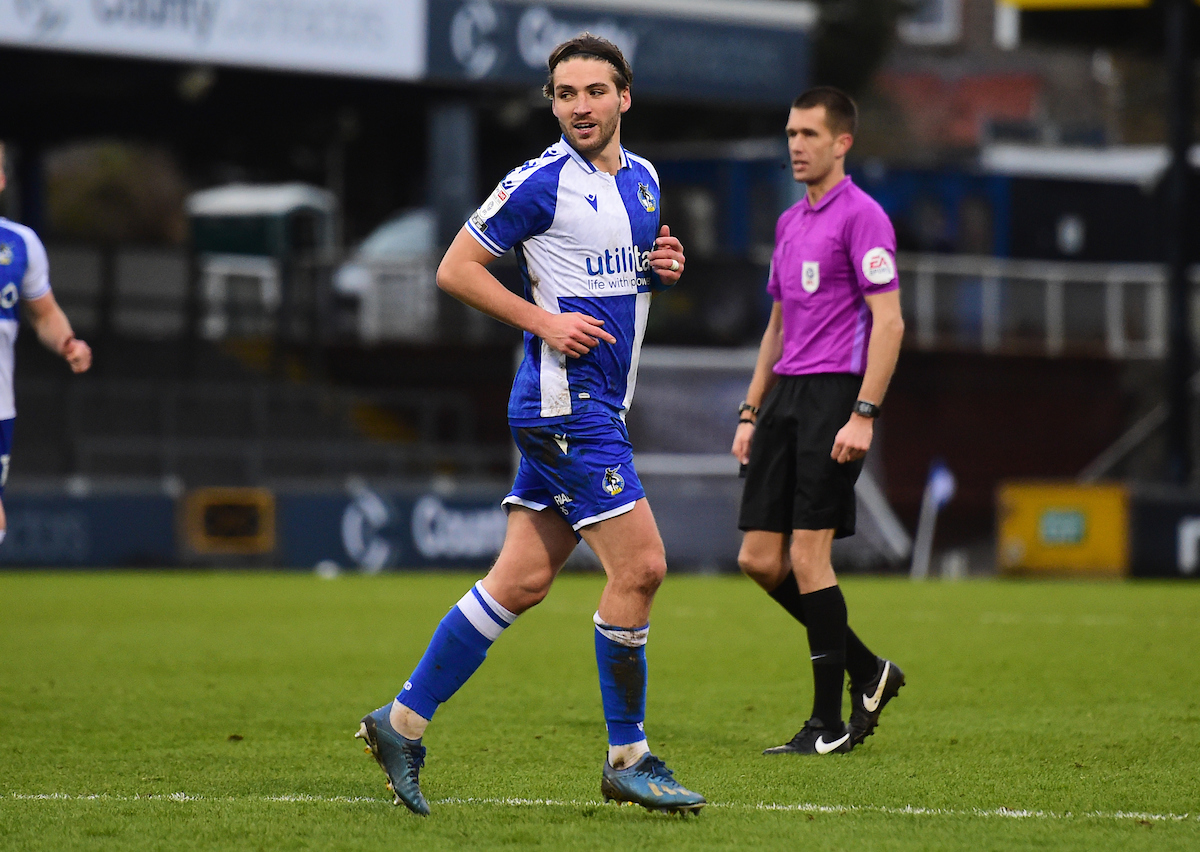 A Rovers breakaway almost worked Josh Grant the chance to strike as the game edged into extra time, but as Oztumer rolled a ball across to the newly subbed on Grant, the ball got stuck under his feet before Dale snuffed out the chance, leaving the game nicely poised at the half time whistle. 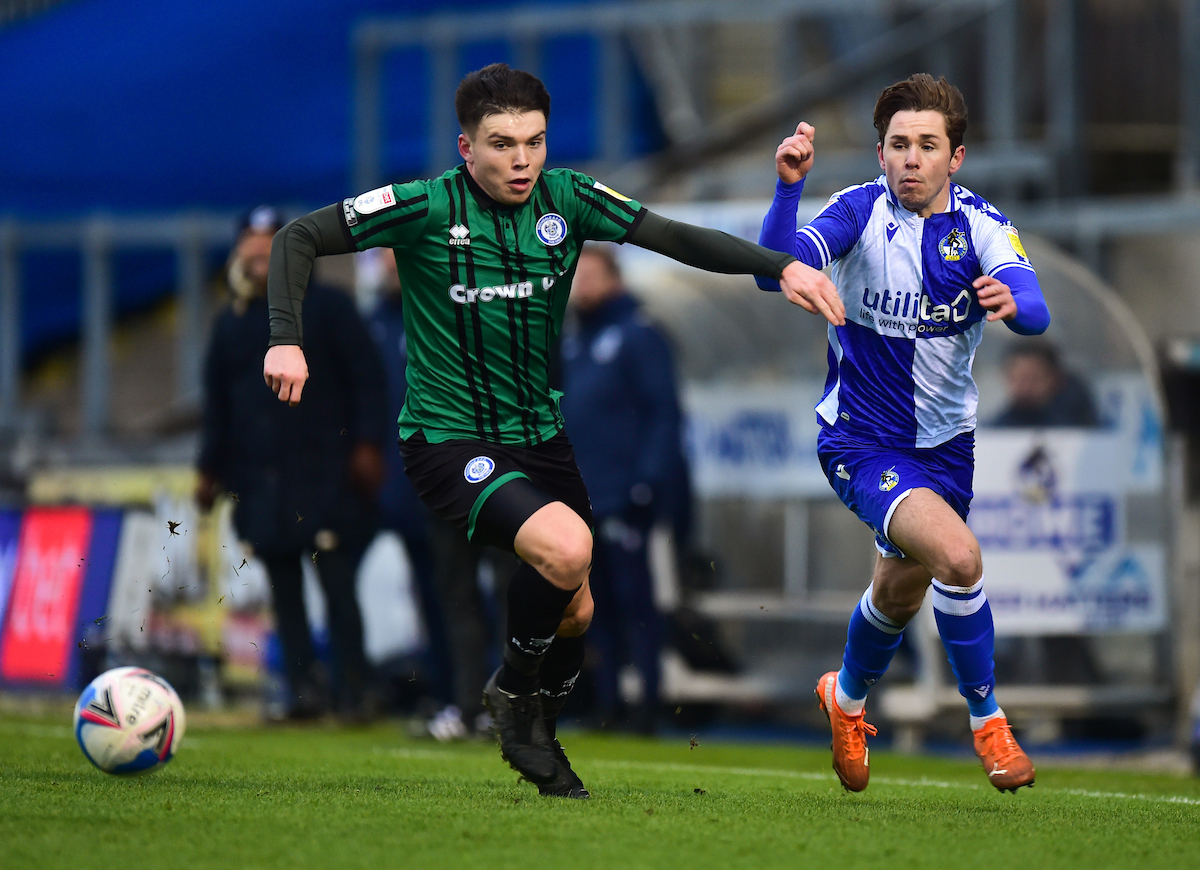 Rovers would carve out the first shot on goal in the second half, as Luke Leahy sharply cut away from his man towards the byline before delivering into Brandon Hanlan. There the striker looked to turn the ball goalwards, setting sights for the bottom left, but Bazunu was equal to it, turning the strike around the post.

Kilgour would then go close for the Gas on the 55th minute with a corner he initially headed back into the mixer. Leahy knocked it back across before a swarm of Rovers players looked to poke home, it bounced out to Kilgour at the back stick who leathered it goalwards, but Bazunu was out well to close the angle and stop. 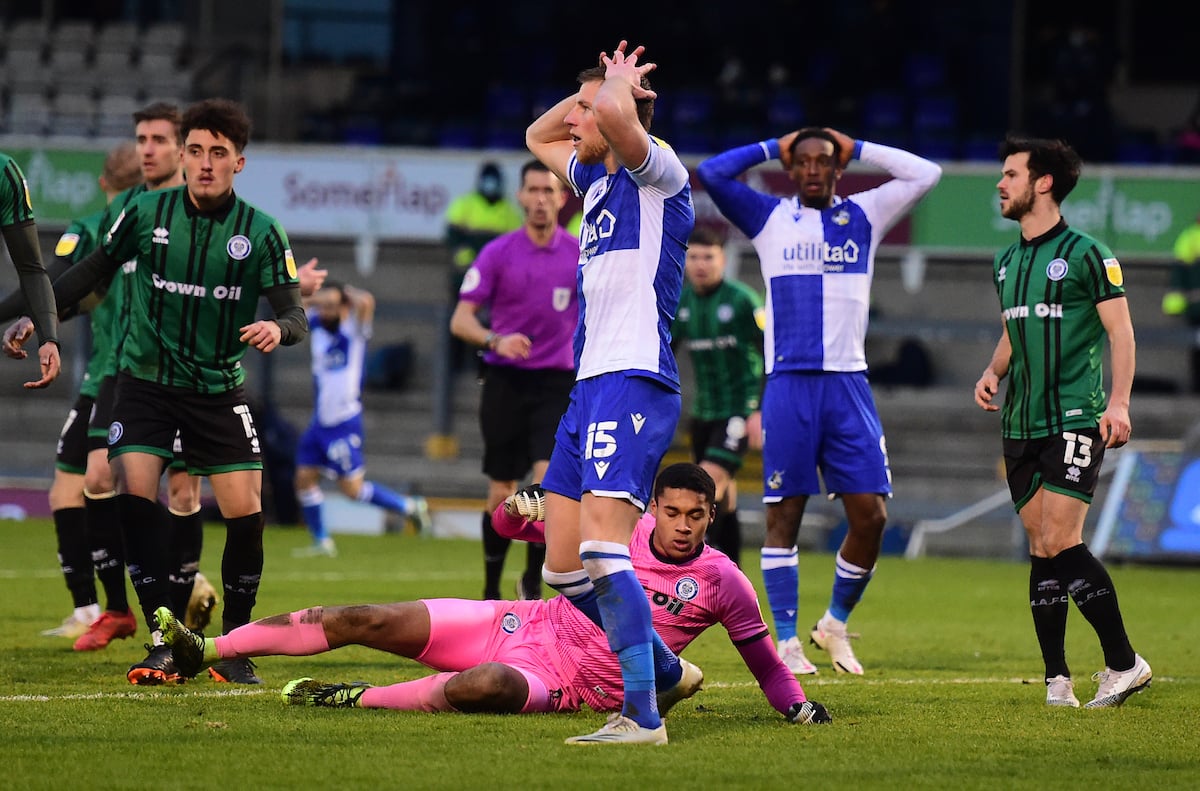 Luke Leahy continued a phenomenal outing with a lovely diagonal ball to Nicholson who pushed the ball towards Oztumer on the edge of the box. The Charlton-loanee struck from distance but the strike was always rising, well clear of Bazunu's bar.

Sam Nicholson would be next to strike from distance as the Gas looked to make their pressure pay. Laid out to the Scotsman on the edge he took a touch before pulling the trigger with a dipping strike. He connected superbly well with it but saw his strike connect with the bar too, glancing into the Thatchers much to Nicholson's disappointment.

However, it would be Rochdale who would strike next. Alex Newby jinked his way in off the right flank into space before firing low at Day's goal through a sea of legs. It squirmed under Joe Day, with Newby doubling his tally.

On the break, Humphrys would go close for Dale as the 70th minute approached, sliding a left-footed strike past Joe Day's left post from a sharp angle.

With 15 minutes to go, the Gas had the ball in the net. Zain Westbrooke struck a low free-kick under the wall and into the outstretched palm of Bazunu, it deflected back to Hanlan who stabbed home but saw the linesman's flag raised as he went to celebrate.

Rovers piled pressure on late doors but were unable to find a leveller with Rochdale sitting deep. 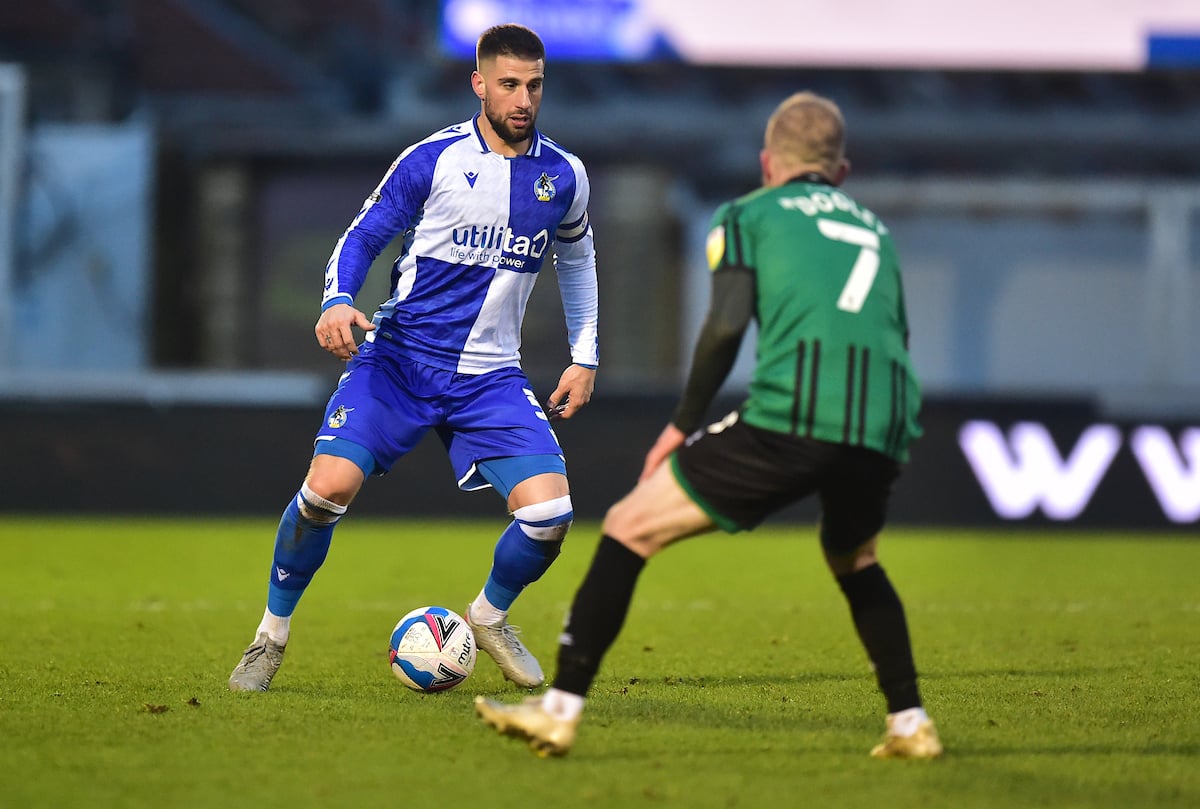 The Gas now travel to Accrington Stanley on Tuesday evening.