The Gas take all three points in an action-packed evening at the Mem!

In a game that had everything, a John Marquis close-range finish looked to put Pompey in the driving seat before a Jonah Ayunga double fired the Gas into the lead before half-time.

Luke Leahy would notch a penalty in the second period after he himself was brought down before Joe Day would step up in added time to deny Pompey a pathway to a late comeback. 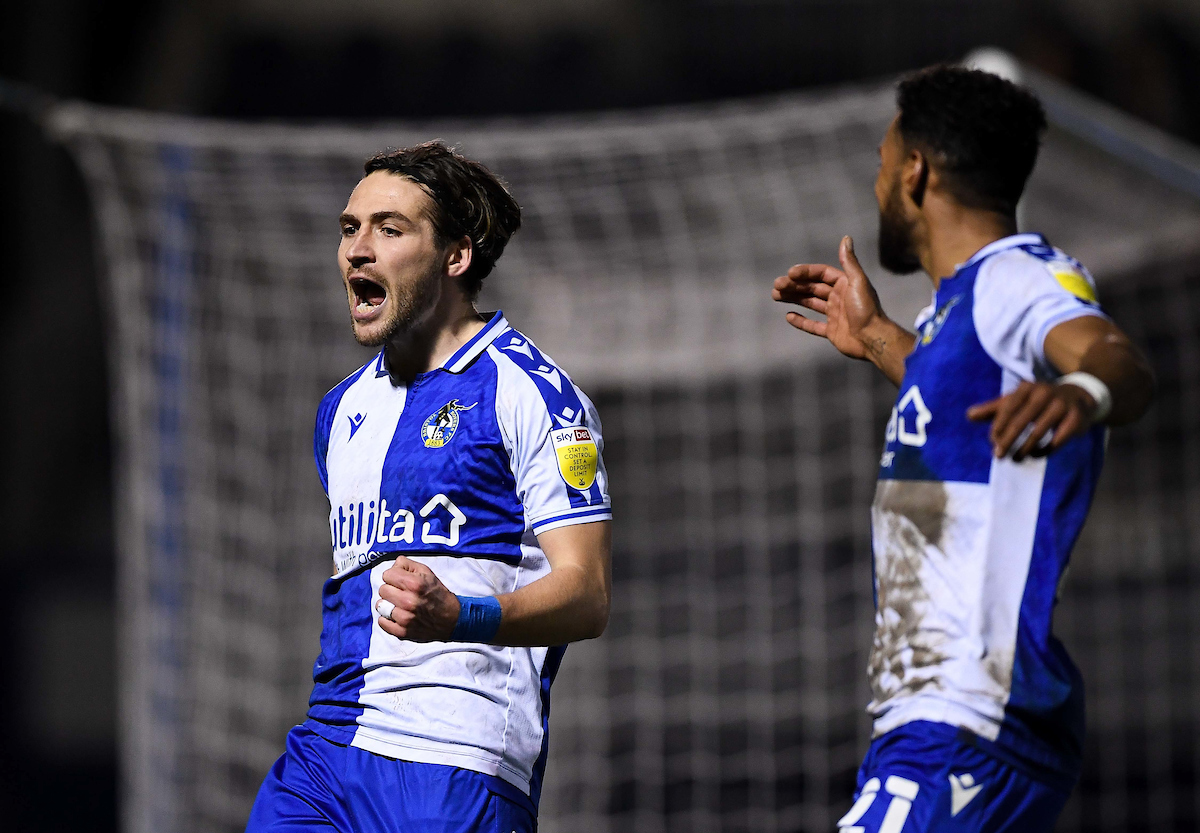 Tommy Widdrington was forced into one change as he took over the reins at the Gas this evening, with Max Ehmer injured, replaced by Cian Harries. An all-change attacking trio formed, with Nicholson, Hanlan and Ayunga starting in place of Rodman, Daly and Oztumer. 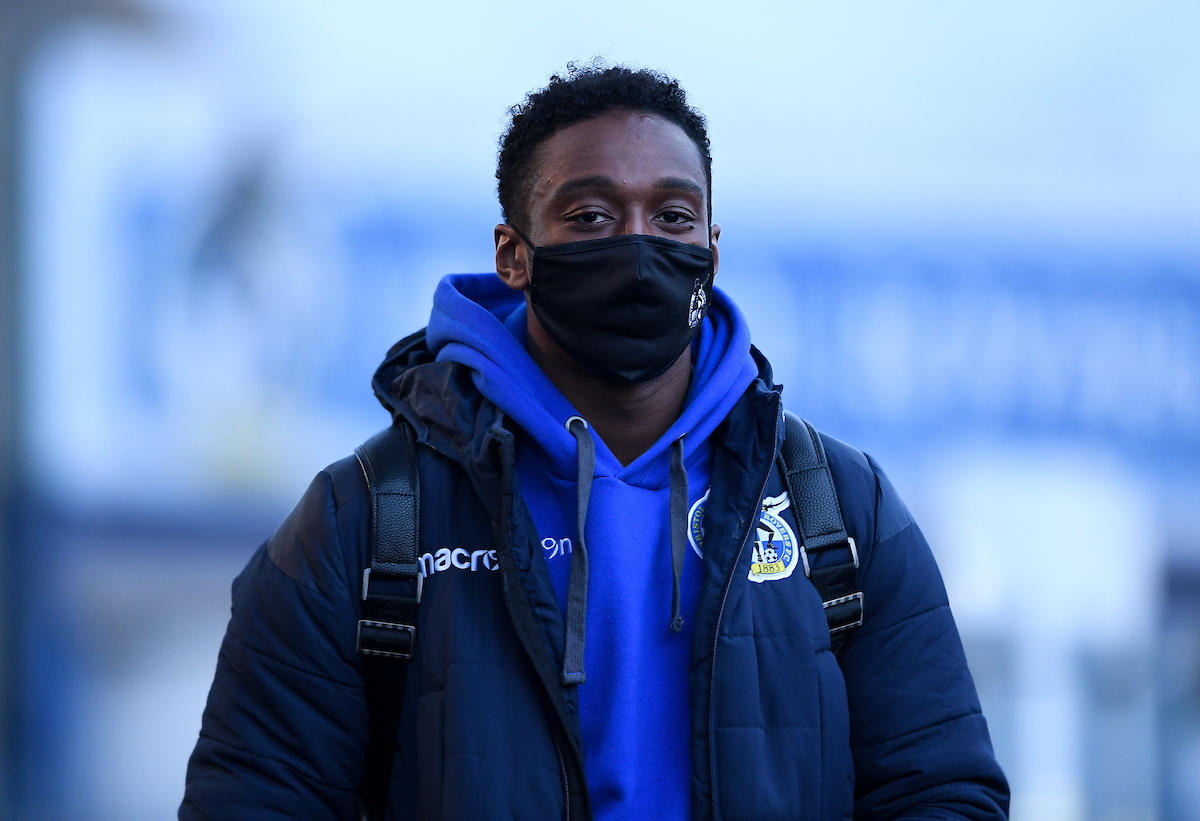 It's been more than a busy week for Bristol Rovers, since their 2-0 defeat to Oxford on home soil last Tuesday. With the club parting company with Paul Tisdale since, and controversy following the postponement of their clash with Swindon Town on Saturday, it was nice to return to on-field action on this fine Tuesday evening.

The game's first sniff of a chance came through stand-in captain Luke Leahy, who looped a smart ball over the Portsmouth back line for Hanlan to chase. It bounced towards the left side of the box, with the striker in a footrace to beat the onrushing MacGillivray, in the end, the Pompey 'keeper won narrowly, collecting in front of Hanlan.

Sean Raggett would head over after connecting with an inviting free-kick delivery moments later.

McCormick would secure the Gas' next sight of goal on the quarter-hour mark, as Sam Nicholson seemed to knee the ball in the midfielder's direction on the edge of the box. McCormick ran onto it and stroked an effort goalwards, but it was too central and MacGillivray collected.

Rovers continued their pressure, with Luke Leahy working space on the left flank to curl in a cross for Brandon Hanlan. Hanlan connected well, looking to redirect the delivery goalwards from just inside the box. He found the target, but MacGillivray adjusted well to deny him.

Moments later, the Gas had to dig the ball out from under their own bar. A free-kick deflected out towards the ref on the edge of the Pompey area, deflecting harshly for Rovers, springing a Pompey break. A wave of orange progressed forward before floating to Marquis at the back stick to head on goal. Joe Day adjusted to get fingertips on the ball, flicking it back across his goalline where Kilgour acted on instinct the hoof the ball out from danger. Some Pompey shouts went up, claiming the ball went over the line, but in truth, they had little to stand on given the nature of the breakaway.

Pompey sustained their pressure though, and on the 25th minute, a venomous cross found John Marquis who rifled home from close range to take the lead.

Before a further 10 minutes had passed, the Gas were back level. Jonah Ayunga managed to isolate his defender inside the area towards the left side. He stood up his man, jinking left with rapid pace before bolting an effort past MacGillivray in unstoppable fashion. His first league goal for the Gas and what a way to do it.

The game fizzled for a further 10 minutes before that same man popped up to double his tally for the game, and the league. Luke Leahy delivered a superb cross towards Ayunga who'd peeled off at the back stick into acres of space. He chested it down with confidence before rifling hard and low into the bottom right corner. What a half from the 23-year-old, carrying his side into the lead.

That's how it stayed, with Rovers taking the lead into the break. 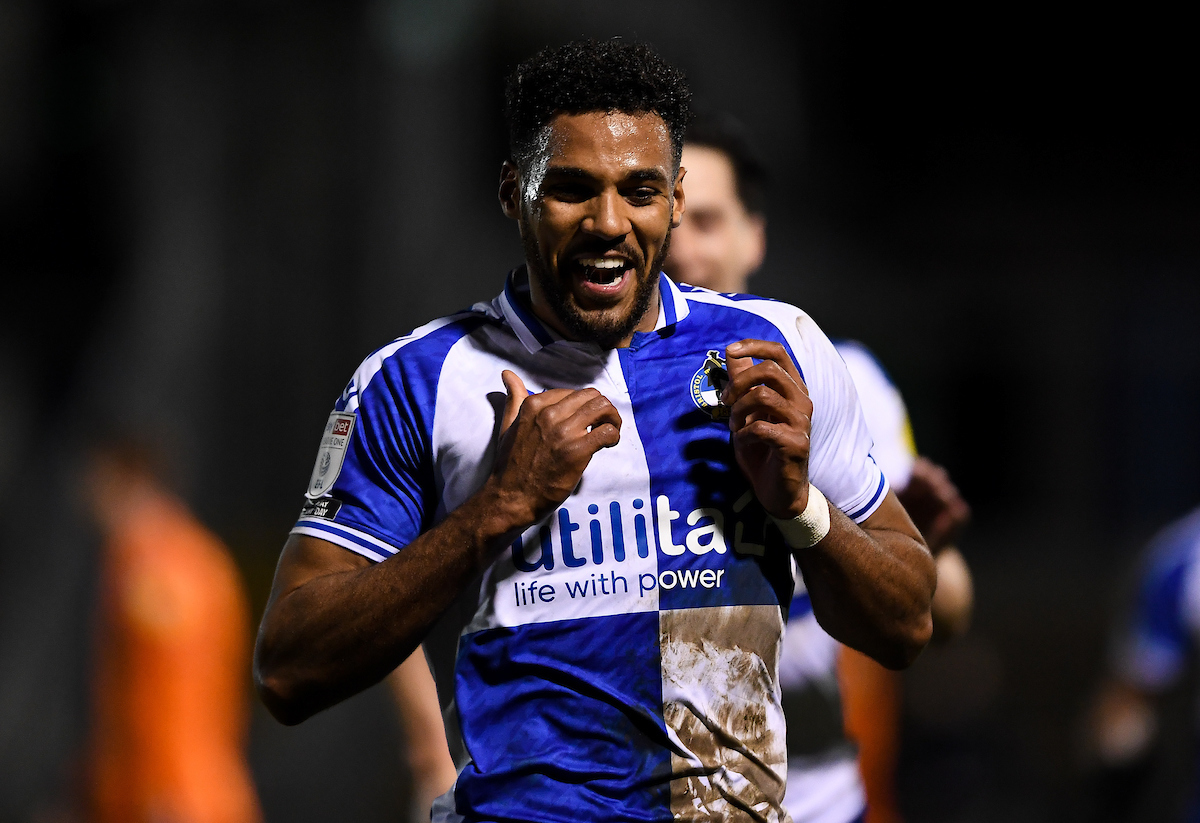 Pompey would be the first to strike on goal after half-time, with George Byers leathering a low strike from the edge of the box way past Joe Day's right post. This strike came after a triple half-time change for the visitors, with Brown, Nicolaisen and Harness replacing Daniels, Curtis and Bolton.

A low Lee Brown cross, something Gasheads will be more than familiar with, looked dangerous as it rolled across the 6-yard box, but Rovers did well to shield it through, rolling out the other side.

On the hour mark, Marcus Harness would leather one goalwards from distance with some venom, worrying Day as it angled towards the top left corner, in the end, flashing just past the Cardiff-loanee's post.

Up the other end, a half-chance came the Gas' way through a Luke McCormick corner, with Alfie Kilgour rising to meet it. He made contact under contention with a Pompey defender, which saw him nod the ball wide.

On the 65th minute, another former Gashead joined the fold, as Ellis Harrison replaced Andy Cannon.

5 minutes later, Luke Leahy nipped in sharply to nab the ball from a defender before progressing into the box. Clipped from behind, the captain for the night went down with the ref' left no choice but to point to the spot. Up he stepped, confident he could extent the Gas' lead, and that he did. A lovely placed penalty nestled into the bottom left corner, making it his 6th of the season. 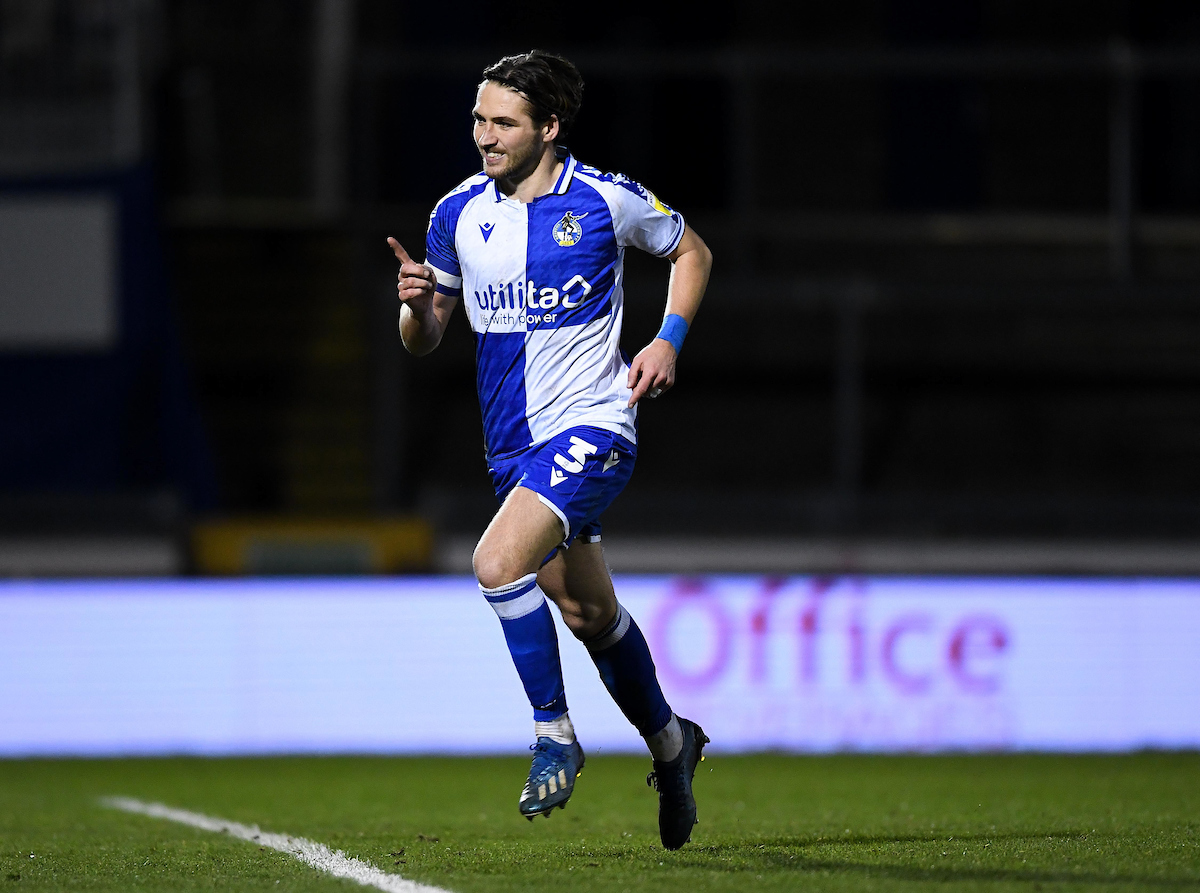 With a quarter-hour remaining, Pompey were shouting for a penalty as a drilled effort came in from the left side towards Day, who stretched well to palm it back out. It ricochetted off the sliding Alfie Kilgour before rolling into Day's clutches, with Pompey claiming it had struck Kilgour's hand. The ref' held firm though, waving away the shouts.

Continuing to assert pressure in hope of a comeback, John Marquis would glance a header clear of Joe Day's right post with over 10 to play.

In the late stages, Luke McCormick was replaced by Ed Upson, before goalscorer Jonah Ayunga was withdrawn, with James Daly coming on. 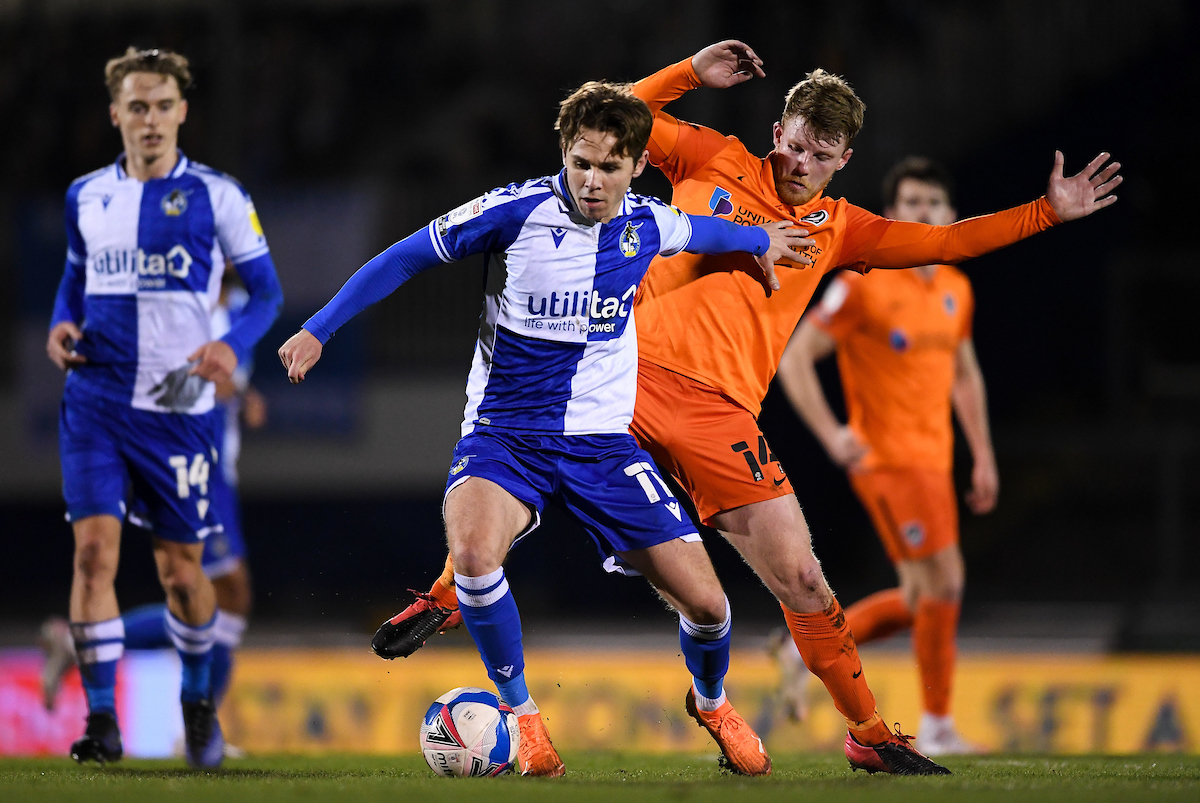 George Byers would force a reflex save from Joe Day in the dying stages, smashing one towards the roof of his net, with Day springing up and tipping over the bar instinctually.

The fourth official signalled a huge 7 minutes added on, prompting chatter amongst the press box it has to be said.

Harness looked to start those added minutes on with style as he managed to smash an effort back across goal while off-balance. It was heading towards the bottom left, but for a fingertips save from Joe Day, knocking the effort onto the post before it could be cleared.

Joe Day would be required for one big moment one more time this evening, as Harrison took a tumble under Williams' challenge, with the ref' pointing to the spot. With the chance to narrow the deficit Marquis struck low to the left, only to see Joe Day get down well and take the ball into his clutches, before quickly being congratulated by his teammates. The Gas saw out the game from there, winning 3-1. 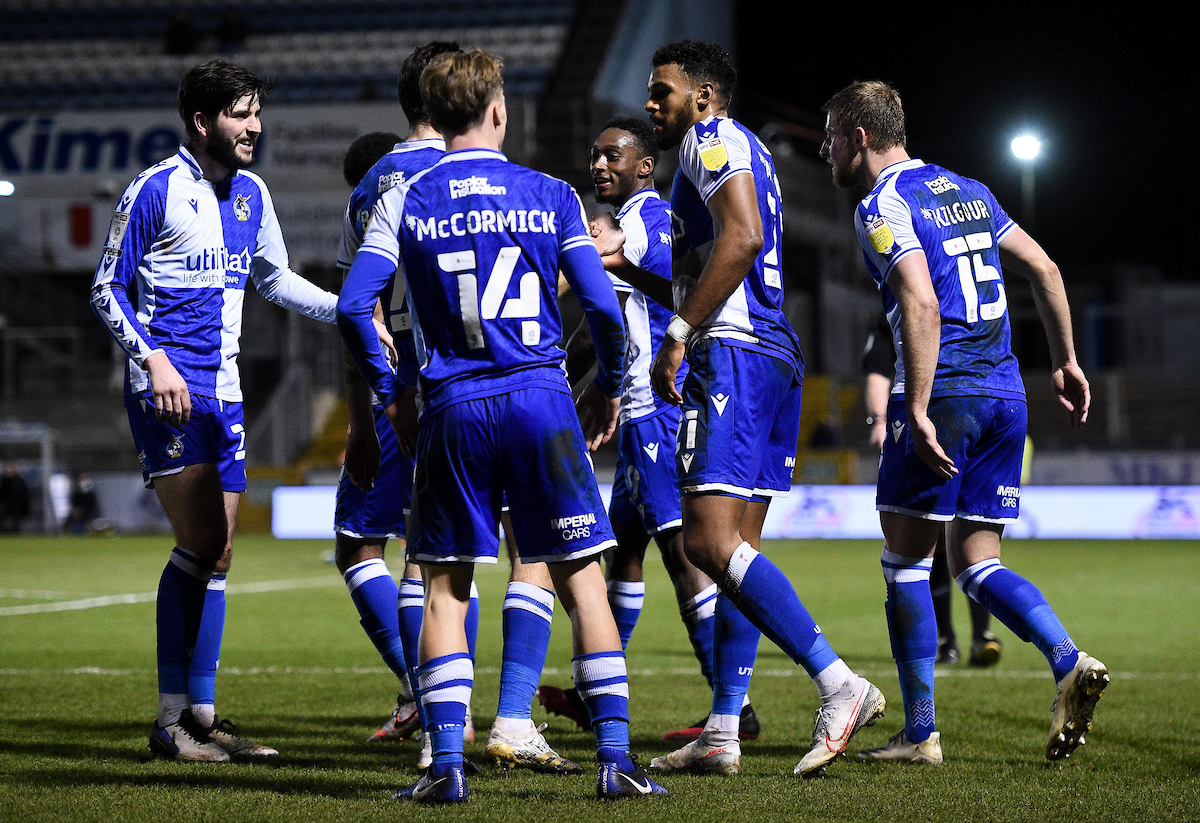 The Gas now travel to Gillingham on Saturday.