The 10th of March 2020 feels like a long time ago, not just for Rovers fans, having watched a painful 2020/21 campaign from home, but for the entire world.

Since then, like the never-ending narrative of football, there have been good points and bad in the COVID saga, many ups and downs since Jonson Clarke-Harris buried two to secure three points against Sunderland.

The Gas had suffered in this COVID period, indeed, their fans had too, but with supporters returning to stadiums for a league game for the first time in over 16 months, a renewed sense of optimism filled the air.

A true 90+ minute rollercoaster was served up for Gashead's, featuring adversity when Mansfield went ahead through Hawkins in the first half, followed by elation, when Harries equalised in phenomenal fasion.

With less than 10 to go, the game also featured a red, with Paul Coutts picking up a red card in the dying stages.

Mansfield would claim all three points from the penalty spot, deep in added time, with Johnson converting low into the bottom right corner. 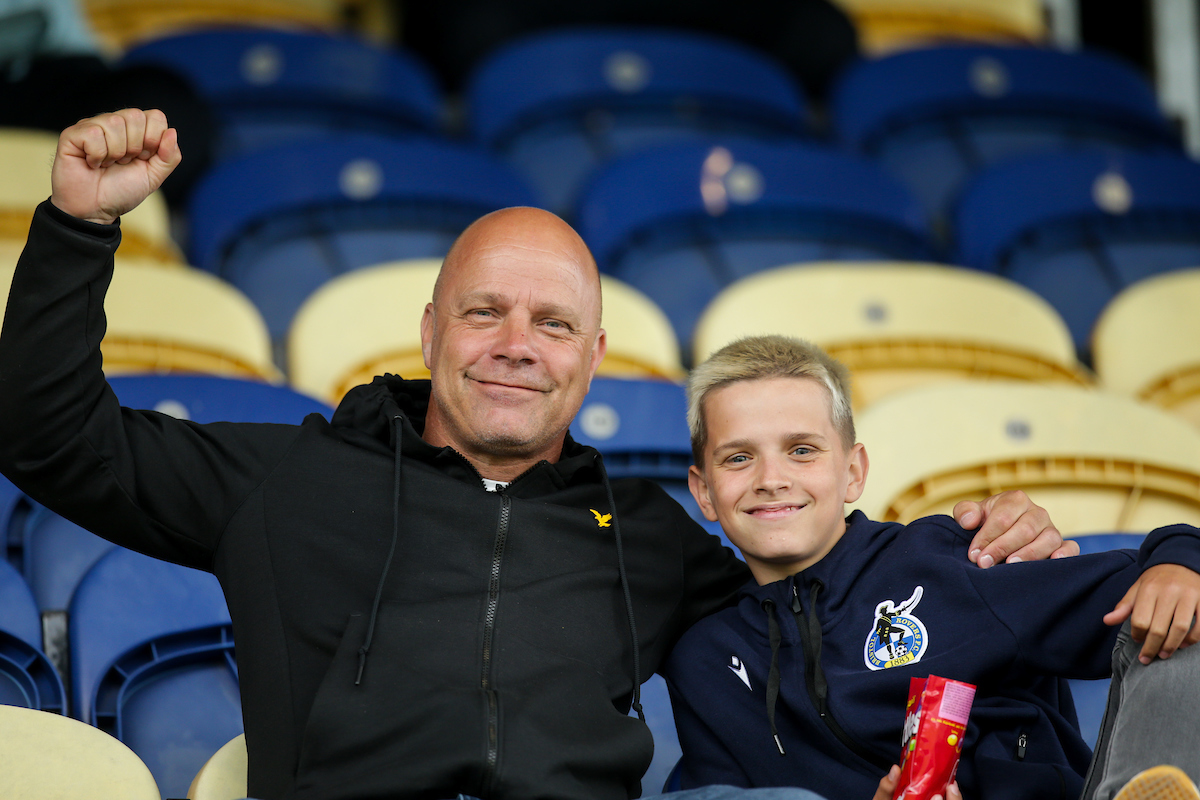 Barton named a side featuring eight debuts for the Gas, with an array of new players coming into the fold. A familiar face would also make a debut though, with Luca Hoole receiving his first league start for Rovers after spending years developing through the Gas' youth system.

He formed a defence in front of Anssi Jaakkola, joined by Mark Hughes, Nick Anderton and Cian Harries. Paul Coutts and Josh Grant formed a solid midfield partnership, with Luke Thomas, Harry Anderson and Trevor Clarke ahead. Harvey Saunders would lead the line for the Gas. 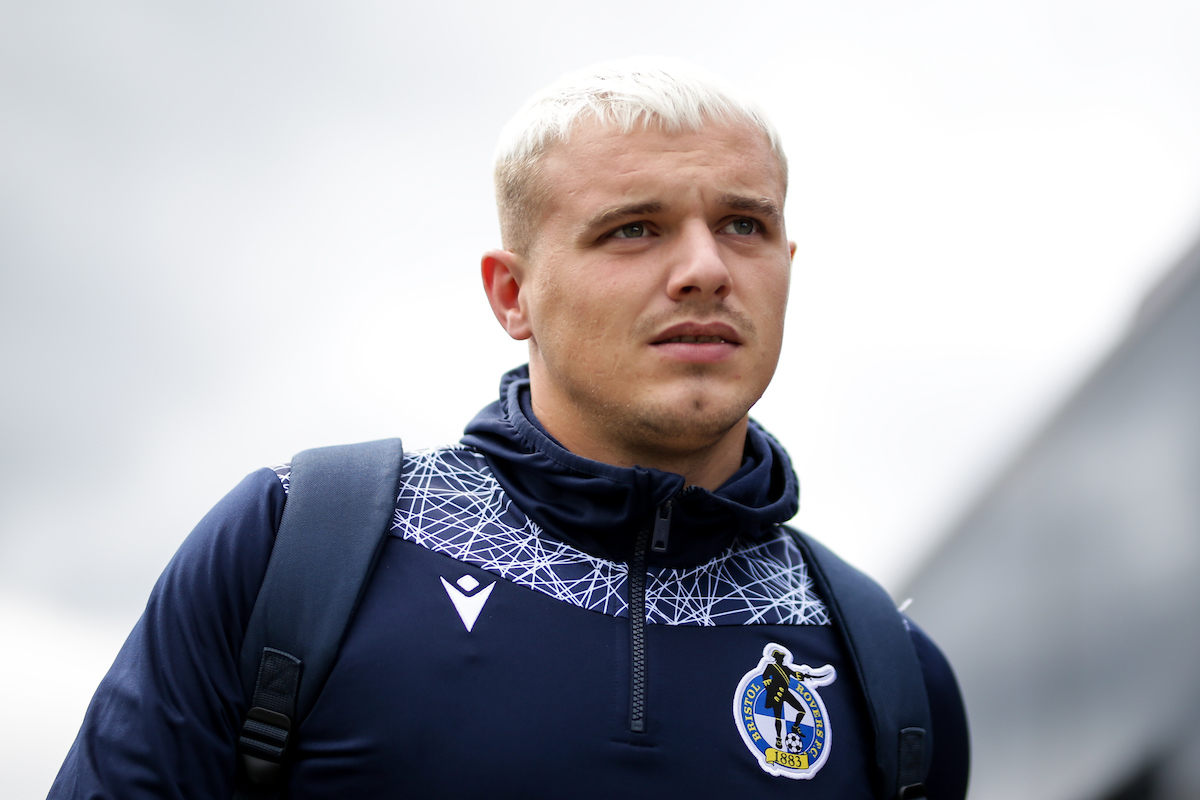 The raucous atmosphere at the One Call Stadium was instantly translated into fire on the pitch, as a number of crunching tackles went in early doors.

Luke Thomas was the recipient of one such challenge inside 6 minutes, fortunate to escape without injury from a lunged two-footed tackle from a Mansfield man.

Luca Hoole was tasked with keeping the home side at bay throughout the opening stages, with the majority of Mansfield's attacks progressing down their left flank, towards the young fullback. Hoole's tall frame came in handy many times in quick succession, with the Welshman able to reach his legs round and retrieve the ball, as well as slide in to disposses.

Smart play from Hoole unlocked the Gas' first set-piece opportunity as Luke Thomas stabbed a through-ball to the byline on the quarter-hour mark. Hoole, anticipating a sweeping challenge from the defence, hopped over the ball, seeing it roll for a corner kick. Thomas' delivery was aimed at Mark Hughes who fought to meet it, but was met by a rigid Mansfield defence who cleared well.

Mansfield Town then won a chance of their own with Danny Johnson jinking into a dangerous area before being clattered by Nick Anderton. A free-kick was given just outside the edge of the D, but Stephen McLaughlin struck his deadball effort into the legs of Cian Harries. 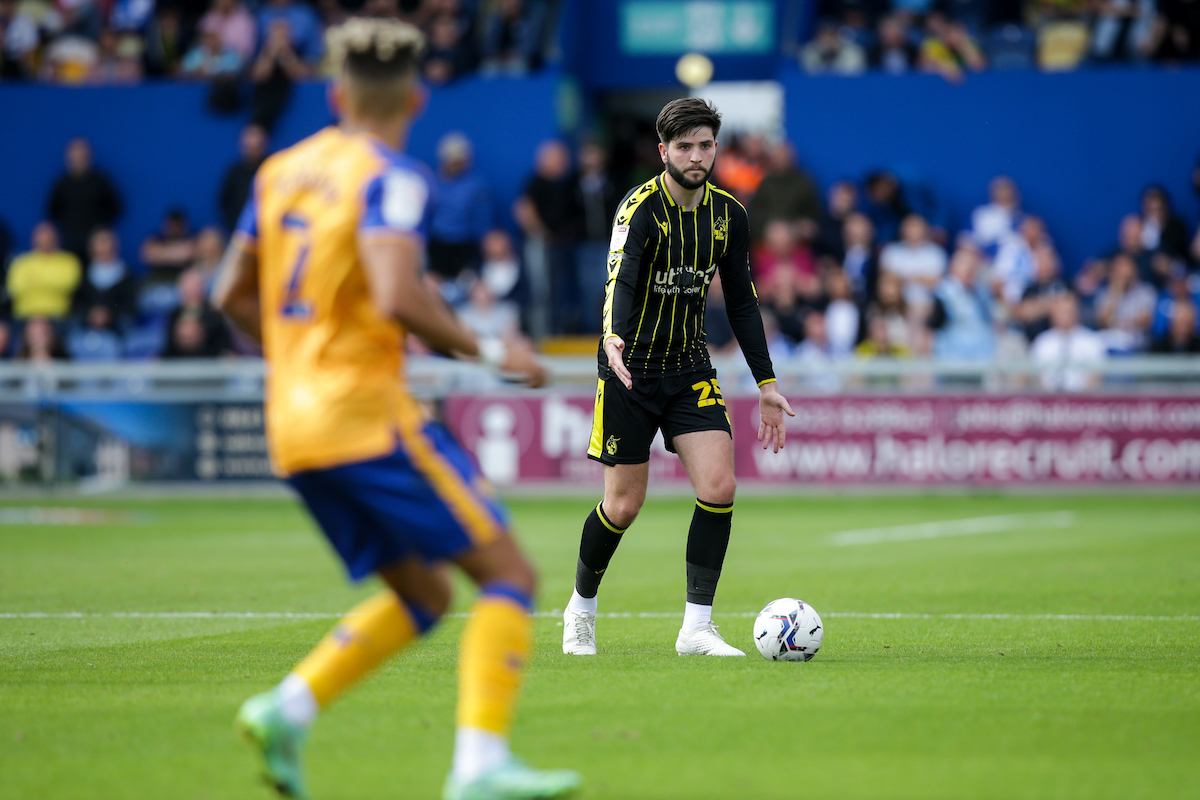 Thomas was proving to be a pain for the Mansfield defence, sniffing out an interception in their territory on the 22nd minute before playing a short ball to Saunders. Saunders looked to thread the return through the home side's defence, but was tripped before he could, prompting the first yellow card of the game, for George Maris.

The free-kick came to nothing but moments later the Gas had another, a quick one taken by Luke Thomas unleashed Anderson who let it run across him from inside the box. He cracked off an effort from the angle but was met by the onrushing Nathan Bishop.

The tide looked to be turning the Gas' way as the game began to approach the half-hour mark, following a nervous opening spell at the One Call Stadium.

15 years in the blue and white quarters may have weighed too heavily on the shoulders of Ollie Clarke, as a rolled cross made its way towards the now-Mansfield captain on the edge of the 6-yard box. Clarke's heart must have sunk as he scuffed his effort into Anderton, watching the ball ricochet away. His hands met his head, knowing he'd squandered the game's best chance so far.

Rovers were forced into a change on the half-hour mark, with Trevor Clarke going down on the left-flank, replaced by Zain Westbrooke.

A good free-kick from Luke Thomas was lifted into the danger area with less than 7 minutes of the first half to go, but Nathan Bishop commanded his area well, claiming from the edge of the six-yard box.

With less than 4 minutes remaining in the half, Mansfield were in the lead. A short corner opened space for the home side to deliver. There, a rare mis-judgement from Jaakkola allowed Hawkins to make contact with a header, flicking into an empty net.

Rhys Oates could've double the yellow's lead before the whistle, almost latching onto a low corner ball inside the Gas' box. He fluffed the shot though, failing to make sufficient contact and watching it roll through.

Mansfield Town would take the 1-0 lead into the break. 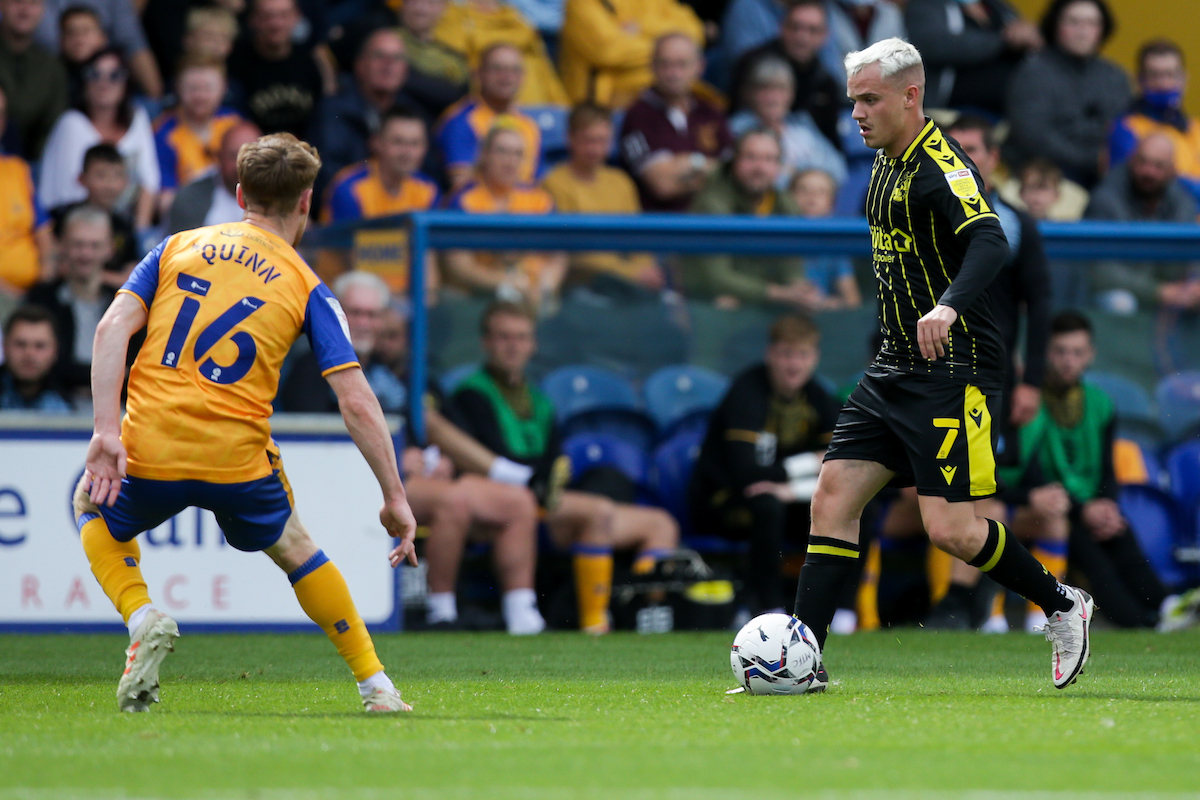 Rhys Oates would finish the first half with a chance, and would begin the second with one. A ricochet took the ball into his path on the edge of the area, with Mansfield man winding up for a low strike at Jaakkola's goal. With the ball bouncing infront of him, the Fin took no chances and palmed it wide.

Superb defending from Anderton kept Rhys Oates out moments later as the pacey forward charged at the former-Carlisle man. Anderton tracked him superbly as he shuffled for space, eventually getting a block in.

Josh Grant would then need to block a strike from Oates, with the number 18 picked out on the edge of the box. Grant charged the effort down quickly, extending a crucial leg to block well.

Rovers had been under unrelenting pressure for the opening 15 minutes of the half.

Then, when the Gas needed a moment of magic, they found it.

A set-piece that was seemingly coming to nothing, the ball flicked up in the air for an audacious opportunity over 20 yards out. Cian Harries' left foot struck it mid-flight, sweet as can be. The result, the ball was sent careening towards Bishop's goal with the Manchester United loanee left stranded as it met the Mansfield net. 1-1, game on. 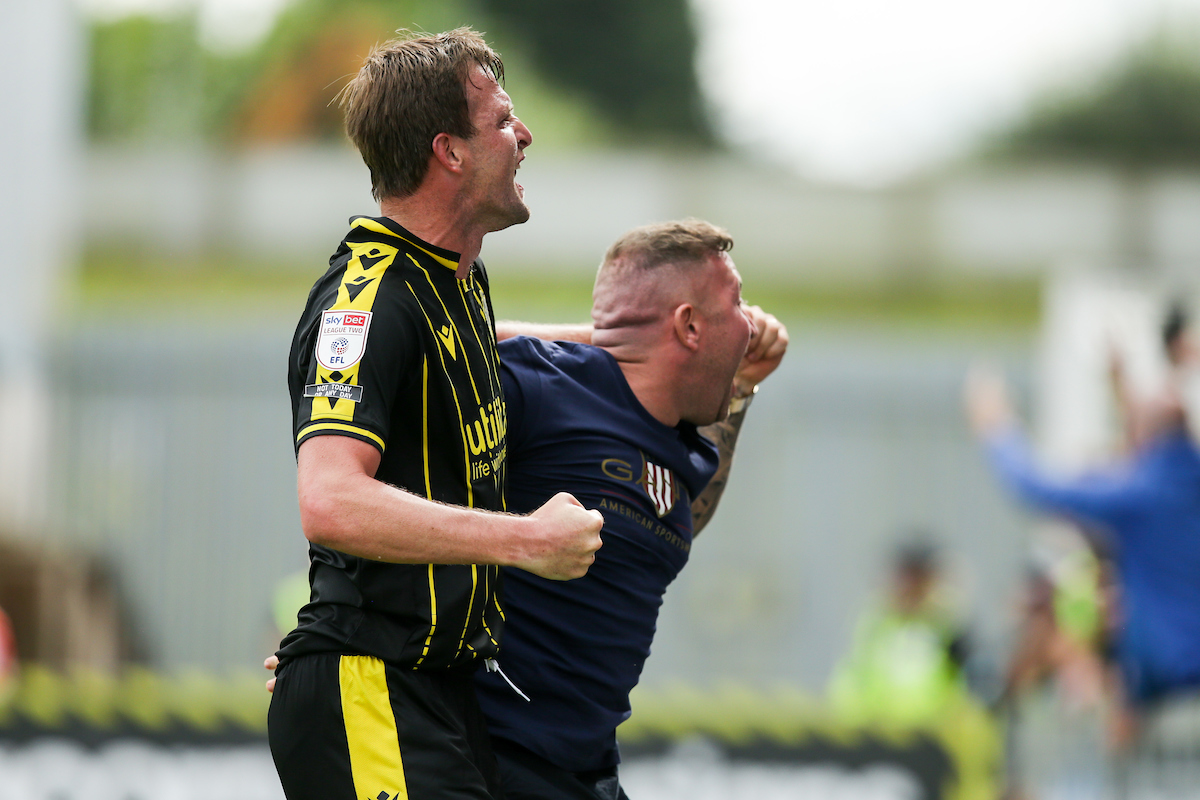 Rovers, from the jaws of defeat, burst into the ascendancy with their momentum only boosted by the roar of the Gas faithful. A ball played in Harvey Saunders allowed him to control with his left and turn, angling towards the left side of the area. He struck with venom but skewed his strike clear of the crossbar. 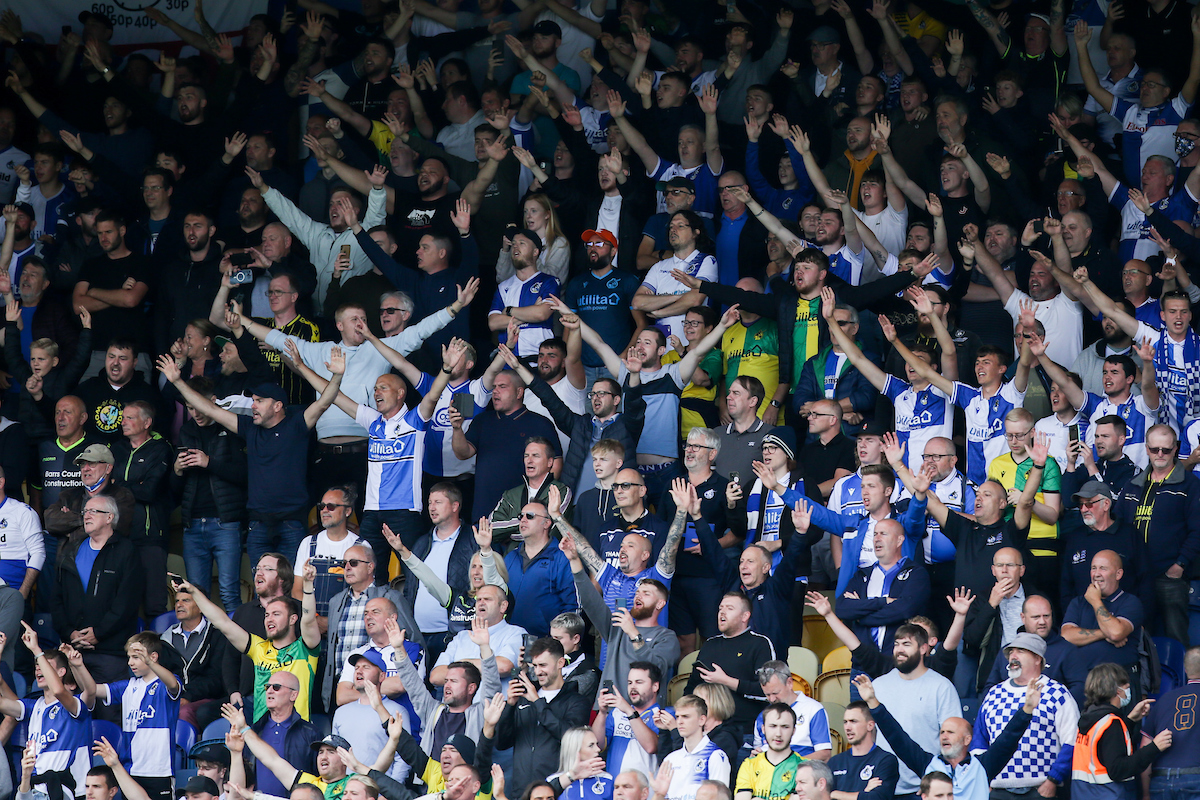 As the game approached the final 15, Mansfield sniffed out half a chance as Danny Johnson broke the Rovers line and progressed towards goal. Anderton was once again there to harry his man, with Johnson forced slightly wide before striking a powerful effort. Cheers began to ring round the One Call Stadium, before fans slowly came to the realisation that it had in fact hit the side netting.

Then, in another twist of fate, Rovers were reduced to 10 men. Retreating from a goal kick, Coutts appeared to strike out at Mansfield Town's Danny Johnson. The ref' immediately stopped play, showing the red card to the Gas' captain.

Barton made changes following the incident, with Taylor and Baldwin replacing Anderson and Thomas.

The formation shifted into a 5-3-1, with Baldwin taking an unusual spot in the midfield.

Johnson would skew a close-range effort wide as Mansfield took a vice-like grip of the game, seeking out a winner on home turf with 5 minutes added on.

The search continued when Gordon's set-piece delivery picked out Oli Hawkins once again at the back stick, looking for his second of the day, Hawkins steered his header wide of the near post.

Mansfield would receive a penalty in the dying stages, with Hughes adjudged to have held onto a Mansfield man in the box. Johnson stepped up to strike home, seeing the Gas defeated in the final minute. 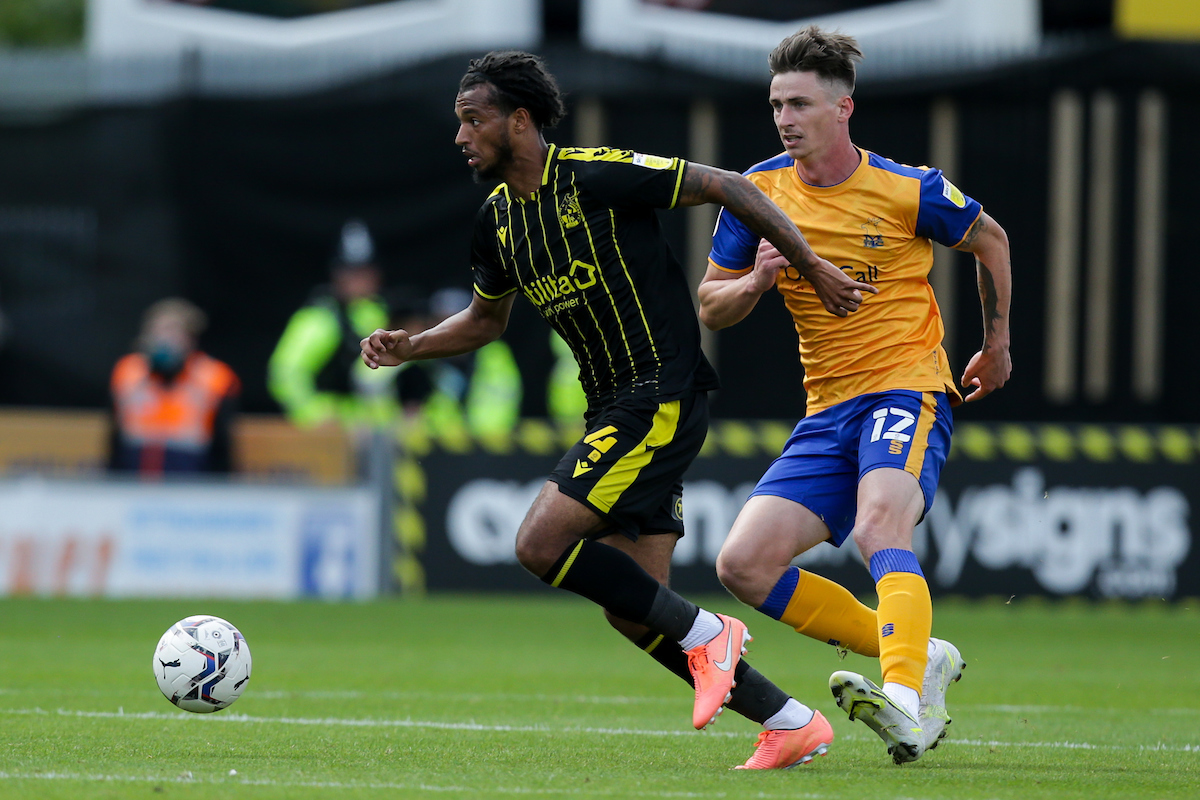