Northampton steal a point from the Gas after Hoskins levels following a Luke Leahy opener...

Who else would it be other than captain Luke Leahy to break the deadlock in the biggest of games for the Gas? A superb corner, the last of a trio of Rovers chances around the 20 minute mark picked out the left-back who's inital header was denied. Alert to the rebound though, Leahy was allowed time and space to smash past a stricken Jonathan Mitchell to give the Gas a lead.

The goal proved to be the only real strike on goal of quality for the Gas in the first half, but Jaakkola needed to make a superb save at the other end to maintain the lead. A powerful shot from the left side of the area was denied at front-post by the Fin.

A second-half penalty allowed to home side level as a coming together between Baldwin and Jones saw the ref' point to the spot. From there, Hoskins struck the spot-kick down the middle, sending Jaakkola wide to level things up.

Ed Upson would strike the bar moments later with a dipping half-volley from distance, agonizingly close to retaking the lead. 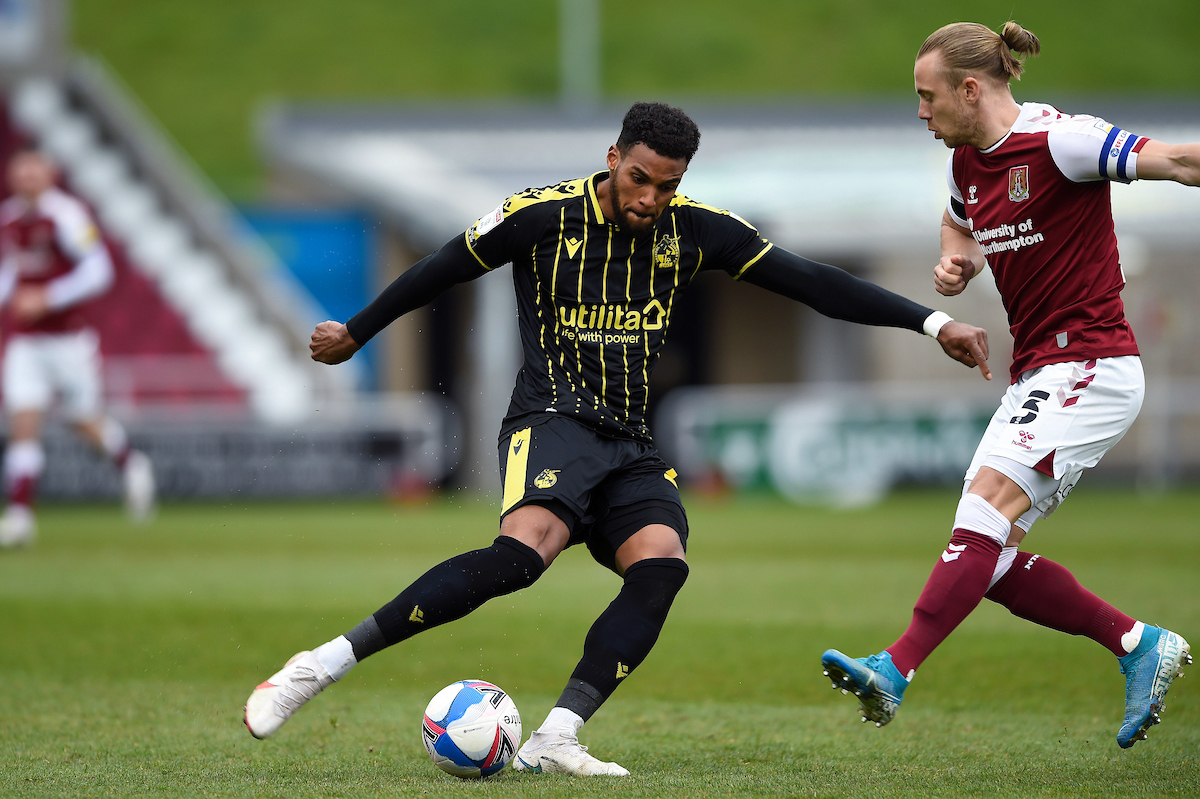 Barton opted to tinker slightly with the winning team that secured safe passage past Doncaster Rovers on Easter Monday. Ayunga came in for Zain Walker to add more firepower up top for the away encounter. Elsewhere, everything else remained the same, with youngster Martinez continuing to warrant his selection in midfield. It did mean a change in system though, with the Gas lining up with a back four, a midfield three with one in the hole behind the two forwards. 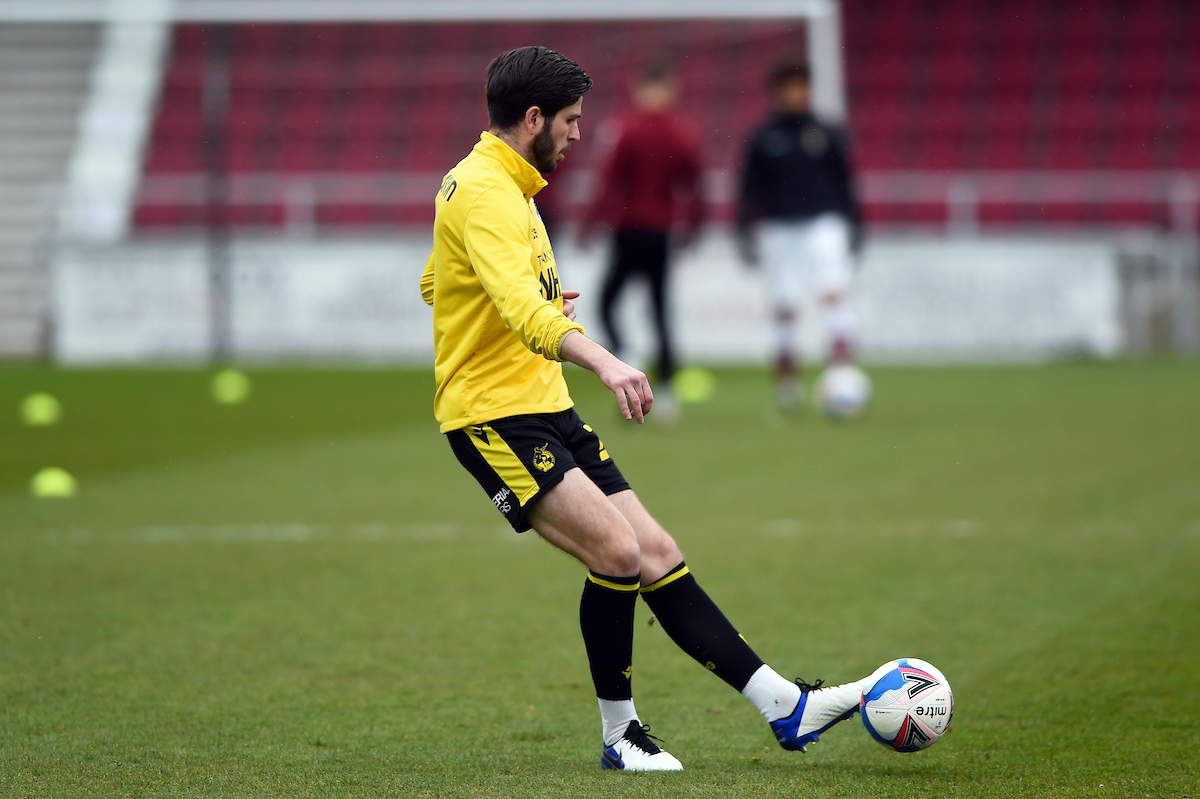 The game was lively from the off, with a smart free-kick bent around a recovering Northampton defender by Luke Leahy to pick out the run of Zain Westbrooke. He looked to jink inside of his man from the byline but saw the home side's defence hold firm and dispossess him.

Both sides were hot on decisions, contesting for every throw-in, freekick and hint at a foul. A point of contention came as Harries competed with Rose in an aerial duel, with Rose looking to impede the Gas defender as they rose. The ref' let play continue, much to the disapproval of Barton and his staff, but Northampton weren't able to make anything from the breakaway.

Jonah Ayunga was picked out for the first clear sight of goal as Westbrooke dinked the ball over the Cobblers defence. Ayunga controlled well but just dwelled on the ball too long, allowing Harriman to slide in and hook it for a corner at the last moment.

The corner that followed would see a Jack Baldwin header saved at the back post, turned wide by Mitchell for another corner.

It would be the third time lucky for the Gas, as their third chance in under a minute found the net through the talismanic Luke Leahy. A Zain Westbrooke delivery picked out the run of Leahy who'd snuck in from the back post under the radar of the Northampton defenders. His first header was saved well, but he had all the time in the world to leather in the rebound and run with his arm raised towards the few fans that had gathered on the hill behind the stand. 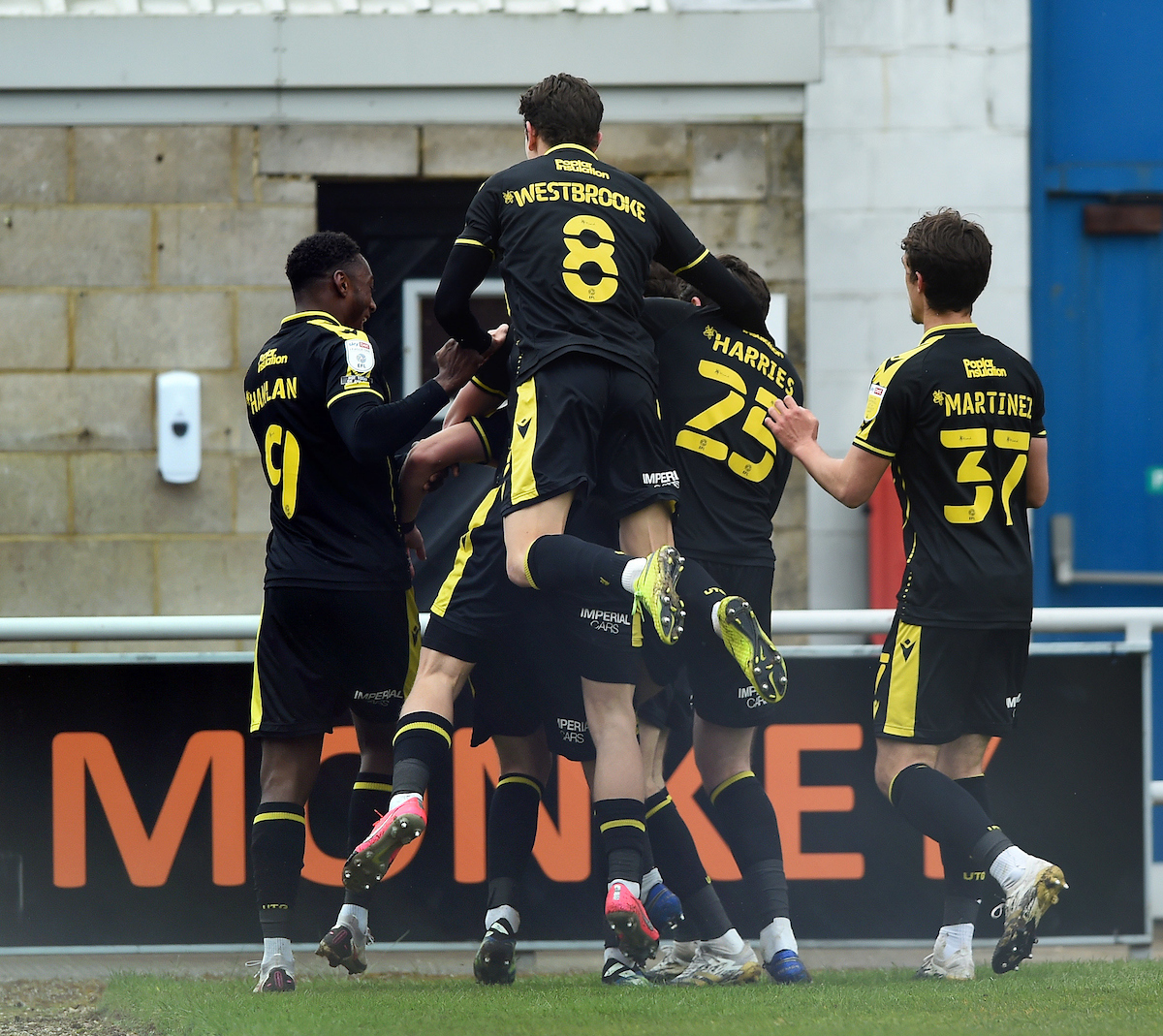 Rovers had a few half-contested penalty appeals turned down in the minutes that followed, with the Northampton defence getting more than touch tight to the Gas forwards on a few instances.

It would be the Cobblers that would force the next save though, with a Hoskins delivery finding Horsfall at the back stick in acres of space. His strike looked destined to find the net from close-range on the left side, but the big Anssi Jaakkola stood firm and denied a venomous strike.

Zain Westbrook continued to deliver into the box with superb accuracy as he found the run of Ayunga towards the back post as the half-hour approached. The towering Kenyan was still forced to stretch to head the ball, targeting towards the top left, but saw Mitchell pre-empt his placement, saving comfortably.

Brandon Hanlan was a nuisance for the Northampton defence as a long ball was hooked deep into their territory. He turned and shielded the ball before laying off to Westbrooke. Westbrooke didn't quite have the angle for a strike with a recovering defender blocking his run but dug out a neat ball to McCormick. The loanee ran onto and struck the ball first time but fired high and wide, seeming to have his leg nicked as he approached the ball, but the ref' waved away the protests.

Westbrooke was given an opportunity from a free-kick around 22 yards out after McCormick was hacked down by Bryn Morris. Morris received the first booking of the game, before Westbrooke swung his strike over the bar as the fourth official raised the board for two added minutes, which passed without issue to see the Gas maintain the lead at the break. 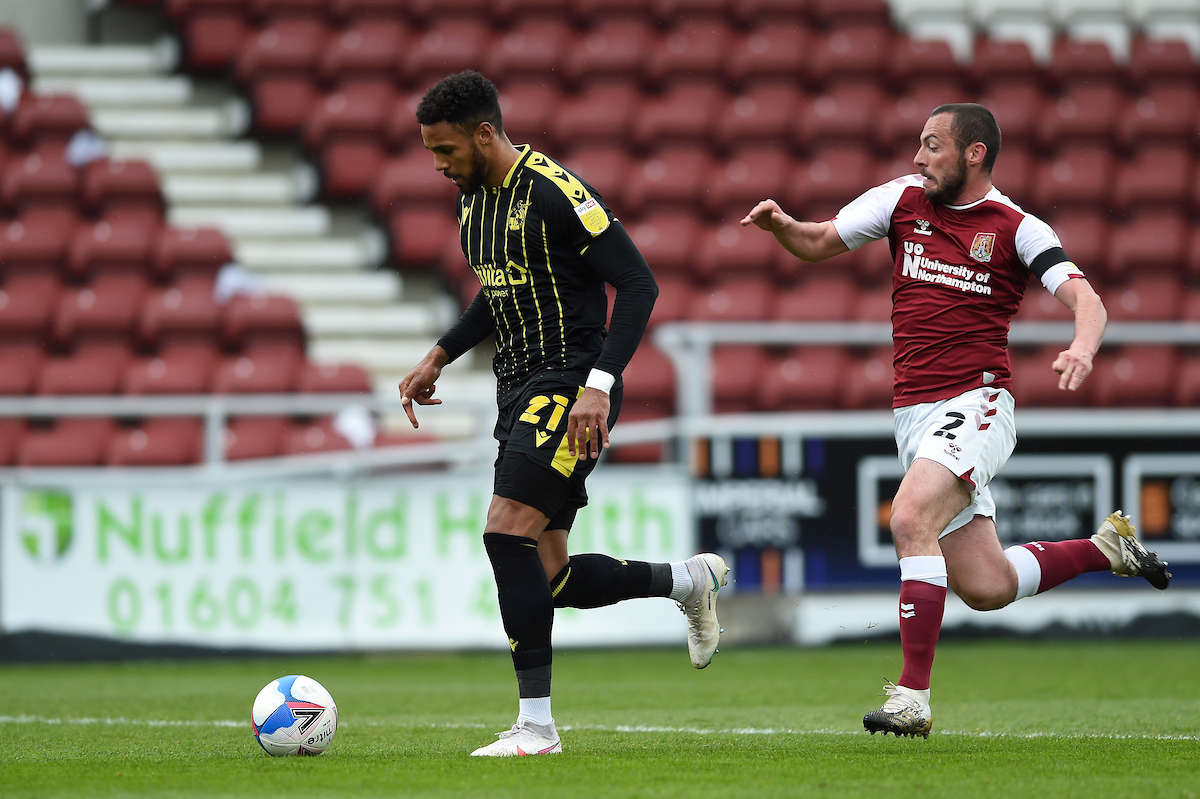 A moment of danger followed the resumption of play in the second period, with Jaakkola mis-timing a punch clear and seeing it loop up into the air deep in the Rovers box. The Gas defence remained calm though and made the clearance at the second attempt.

Rovers did a superb job of controlling the first fifteen following the break though, winning almost every 50/50 in the centre of the field and firmly stamping their authority.

Jack Baldwin would be denied for a second time from a set-piece in the 65th minute as Westbrooke floated a free-kick deep into the Northampton area. Baldwin won the tussle with his marker but saw his header go too central, with Mitchell able to catch in the middle of his goal.

As the 70th minute approached, Danny Rose was handed a golden opportunity for the home side, with a quick throw-in unleashing a break towards the Gas' byline. A switchback picked out Rose with the goal at his mercy but he misfired entirely, taking a complete air shot and seeing the chance pass him by.

A coming together between Baldwin and substitute Alex Jones saw a penalty given to Northampton with just over ten minutes to go. It looked harsh, but Sam Hoskins stepped up to fire past Jaakkola to pull his side level.

A moment of brilliance from Ed Upson almost reinstalled the lead for the Gas as he controlled a bouncing ball before hitting a dipping volley goalwards. It clattered off the bar but his Mitchell as it rebounded out, deflecting wide. Inches from making it 2-1.

It would be the closest either side would come in the late stages, with the game ending level. 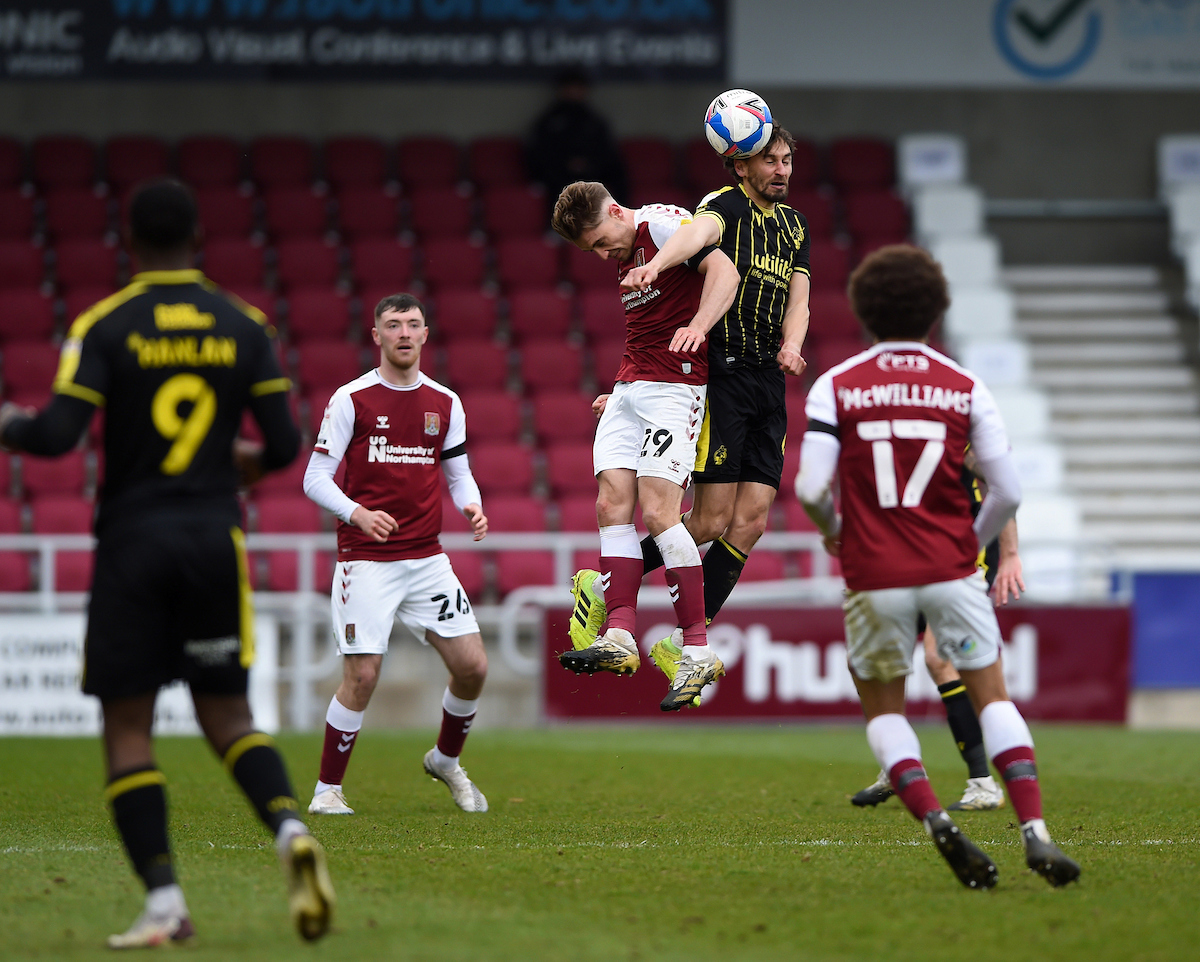 Next up for the Gas, they host Lincoln City on Saturday.