Rovers lose on the road at Ipswich Town...

Three goals came in an eventful first 20 minutes as Ipswich found the net inside 60 seconds through a wicked deflection off Gwion Edwards, a shock to the system as it trickled into the bottom left corner.

Rovers were then dealt another blow on the 10th minute with another deflection featuring in the move, as it bounced to Judge on the left side of the box. From there he rifled low past Jaakkola, putting the Gas two goals adrift in the early stages.

Rovers heads weren't down though, and the Gas fired their way back into things through McCormick as he stole the ball off the Ipswich Town defence, before neatly dinking an effort past the onrushing Holy to find the top left corner.

Holy would be central to controversy moments later, as he rushed out to meet a ball in a footrace with Jonah Ayunga. The towering Kenyan beat the Czech 'keeper to the ball before being cleared out, giving the ref' a tough decision to make, he opted to show a yellow card, much to the dismay of the Rovers players and bench who were certain a red would be produced.

The second half would present more Rovers pressure but as it edged on,  the Gas were unable to make the most of their half-chances. Ipswich Town began to push further into their oppositions half in the late stages, showing resolve against the Gas' attacks to see out the win. 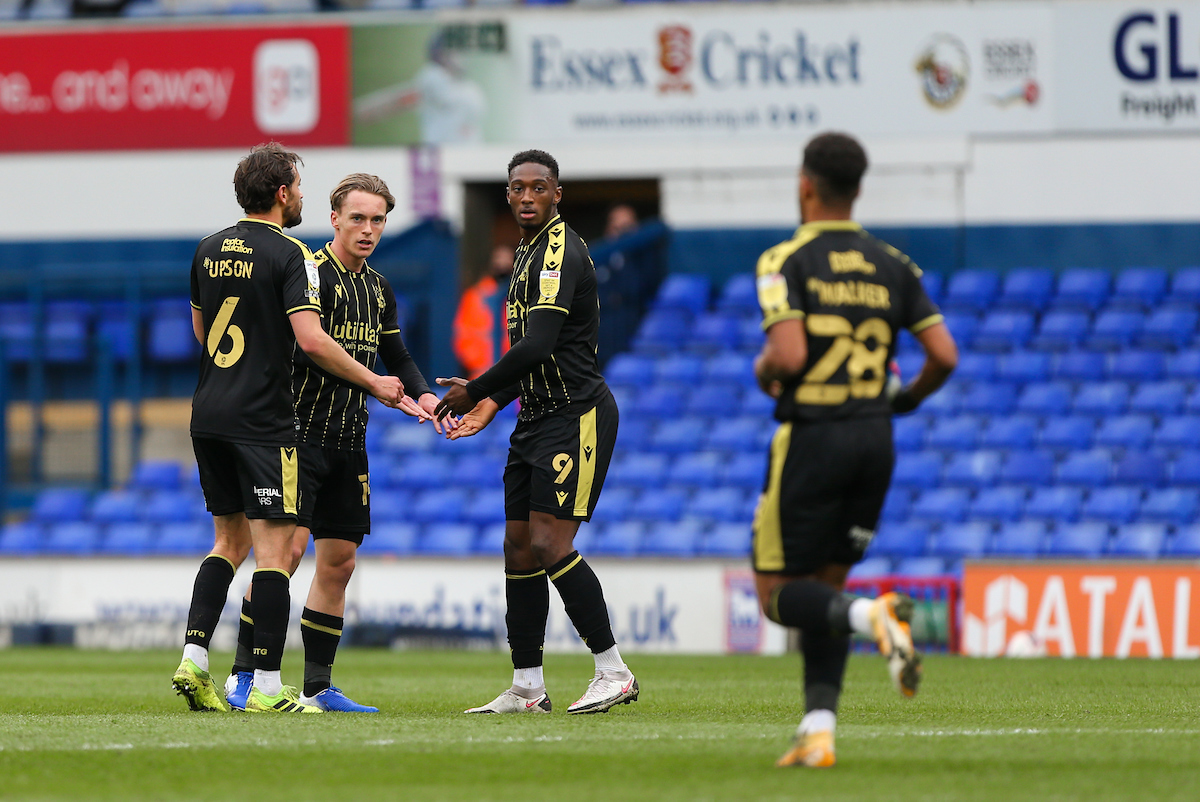 Joey Barton was forced into some alterations to last weekend's line-up, with Alfie Kilgour and Josh Grant both picking up injuries in the week since meaning Jack Baldwin and Ed Upson got the nod. Elsewhere, in a change in shape, David Tutonda replaced Zain Westbrooke. 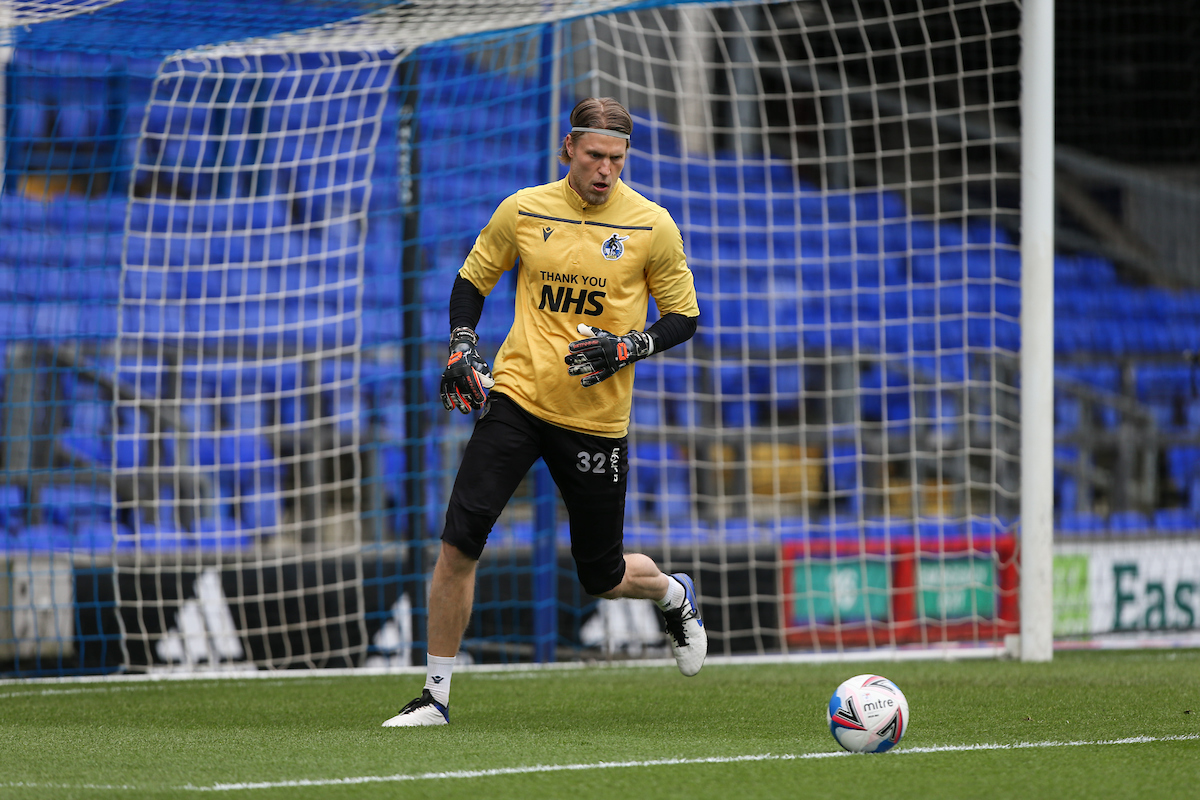 A disastrous start came for Joey Barton's side, with Jack Baldwin looking to hook a clearance away from inside the box as Ipswich made their first foray into the area. The clearance ricochetted off Edwards and bobbled neatly into the bottom left corner, past Anssi Jaakkola.

Misery was compiled as a series of deflections took the ball kindly to Judge on the left-hand side of the box, after Williams had previously poked out a dangerous cross. It was fired back goalwards and ricochetted wide to Judge. There from the angle, he slotted past Jaakkola to make it 2-0.

With 17 minutes gone, McCormick pulled his side back into the game with a moment of solo brilliance. Stealing the ball back deep in Ipswich's half, the Chelsea loanee marched forward, looking up to see Toma Holy off his line. From there, he lifted a delightful strike into the top left to halve the deficit.

Ipswich were lucky to escape a sending off on the 23rd minute, when Tomas Holy, possibly with shades of McCormick's earlier goal haunting his mind, launched out to claim the ball. Ayunga made enough contact to chip it over Holy before being cleaned out by the 'keeper. There, the ref' was given a tough decision to make with Holy taking Ayunga out in a dangerous position, but the referee awarded just a yellow card.

McCormick looked to add his second goal soon after the yellow, with Baldwin heading a ball towards the midfielder on the edge of the box. There, he struck on the half-volley but sent it skywards.

A half-chance came the way of Norwood as Judge delivered a dangerous free-kick in from the right flank. The ex-Tranmere forward couldn't make solid contact though, scuffing his strike wide of the left post.

McCormick was central to everything positive from the Gas in the first half, with another chance coming his way after tremendous work from a Zain Walker who was continually growing in confidence. A cross form the youngster rolled nicely across the area, with Ayunga shielding it into the path of McCormick who shot low first-time. The Gas' goalscorer saw his effort go just wide of the right post. 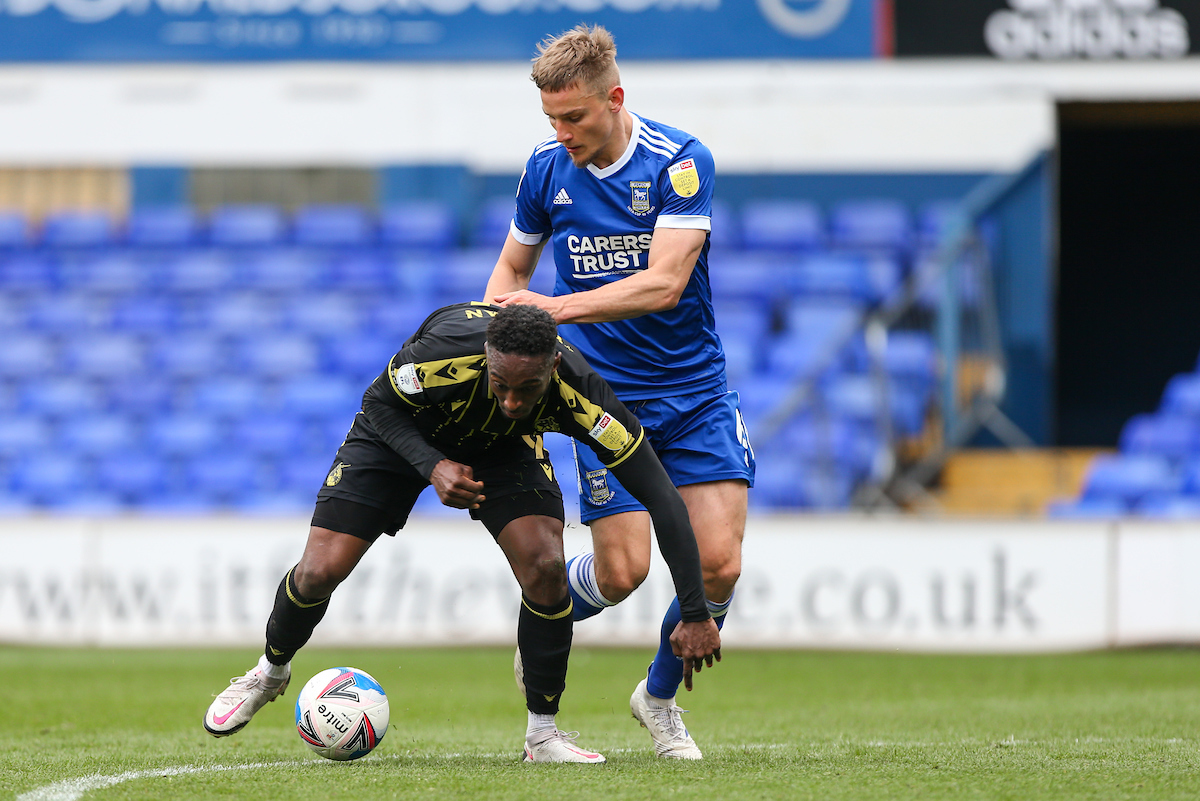 Walker continued his bursts into the box, looking to grow further into the game, and a smart pullback from the byline narrowly escaped the control of McCormick inside the box. Moments later, Ayunga would let fly from the edge, but saw his low strike saved comfortably by Holy at his near post.

Walker would dig out an effort of his own before the break, with Hanlan expertly controlling a looped ball and showing real strength to hold himself up under a strong challenge and lay it wide to Walker. The youngster would fire from the right but Holy caught his effort, the last attempt on goal in an eventful first period. 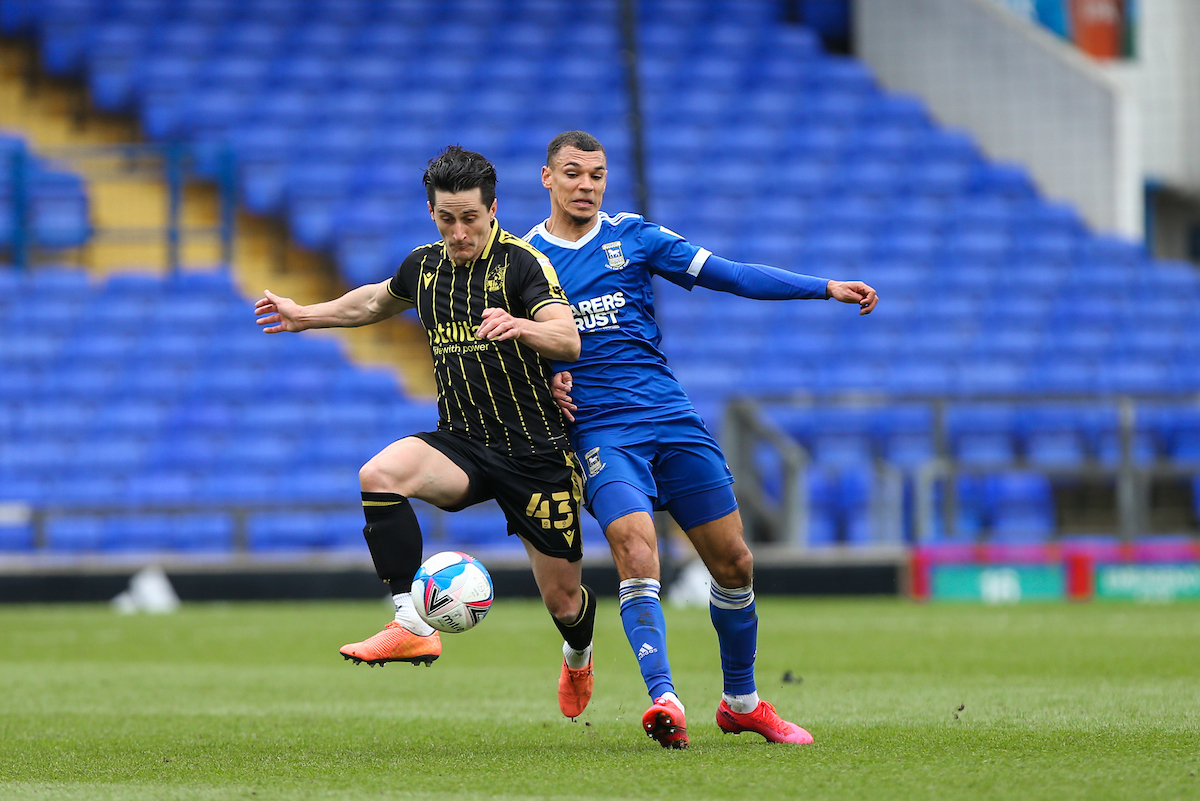 Rovers would continue to test Holy in the Ipswich goal early on in the second half, with Ayunga bursting forward from a central position before jinking onto his left as he entered the area. He struck hard and low but saw Holy get solid contact on the effort before pouncing on the loose ball. An early sighter.

Ayunga would be a focal point for the next move as he crafted out space for a lay-off on the 50th-minute mark, working space to roll a pass back towards Ed Upson on the edge of the box. The playmaker struck with power at Holy's goal but saw his strike saved well in the centre of the net.

Edwards, scorer of the first goal, almost made it three for his side after a punch from Jaakkola took the ball into his path on the right apex of the area. He struck back towards goal hard and low but saw an combination of Williams and Baldwin deflect it clear.

Upson would let fly for the second time in the half, with Walker rolling an inviting ball across the goal from the right flank. Upson lashed an effort first-time, possessing plenty of pace, but saw it clear Holy's bar.

Shortly after receiving a booking for a clash with Jack Baldwin, Aaron Drinan was lucky to escape a second for a challenge on the same victim. Both aerial clashes, the ref' called Drinan over for a talking to on the second occasion, waving away protests for a red card, choosing to just have a word with the Ipswich Town subsitute.

Barton would bring Oztumer on for Walker in his second change, on the 71st minute.

Hanlan would find his best sight of goal so far on the 75th minute, neatly rounding his man and bursting into the area from the right side. He struck a powerful ball across goal, but saw it roll out wide from the angle, escaping the run of Ayunga.

Despite late changes from Joey Barton, Rovers couldn't work an opening to equalize late on, with the Gas comdemned to defeat in East Anglia. 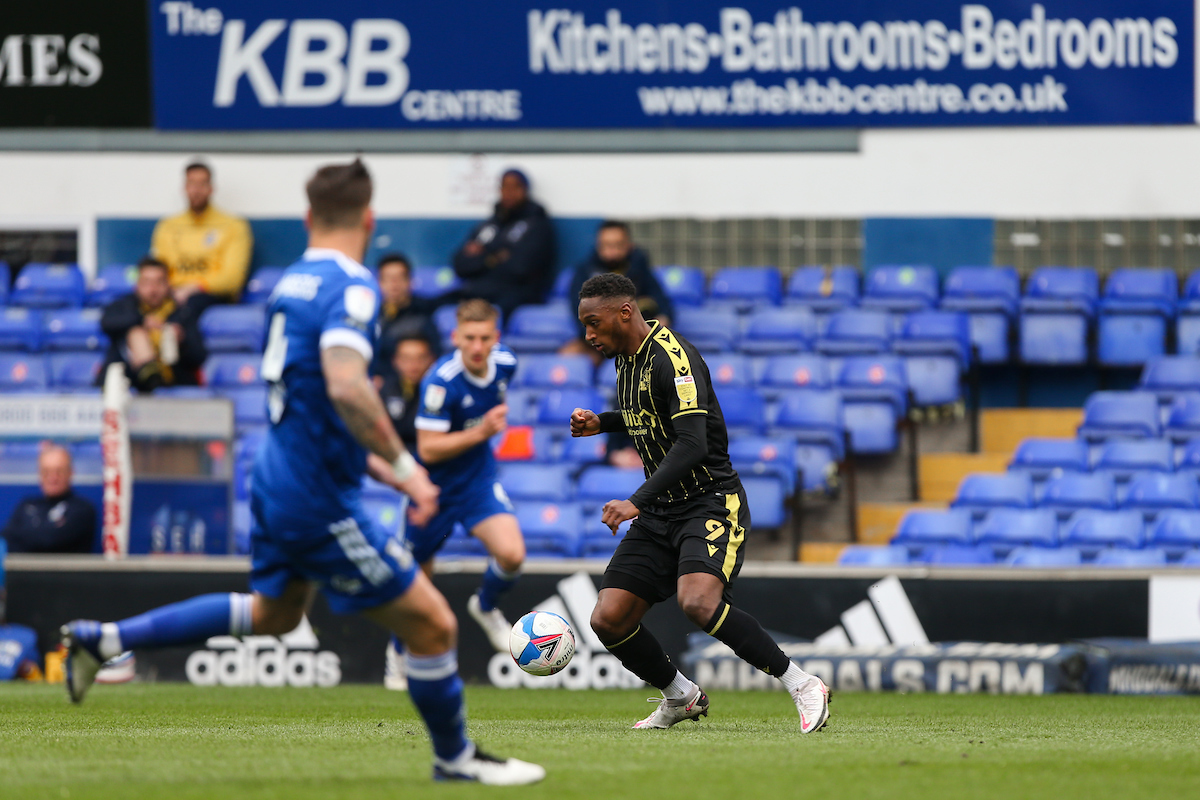