The Gas return home from the Stadium of Light with a point in hand following a well contested first game of the season...

An early penalty put Rovers in the driving seat away from home, as JML was brought down by Burge inside two minutes. Luke Leahy stepped up and rifled the spot-kick into the roof of the net.

The Gas held firm for the majority of the tie, but in the dying stages Chris Maguire found the space between a number of Rovers players to place an effort past Jaakkola, leveling the game.

In added time of the second half, George Dobson saw red for the black cats, with a strong challenge on Mitchell-Lawson deemed worthy of a straight red by the referee. 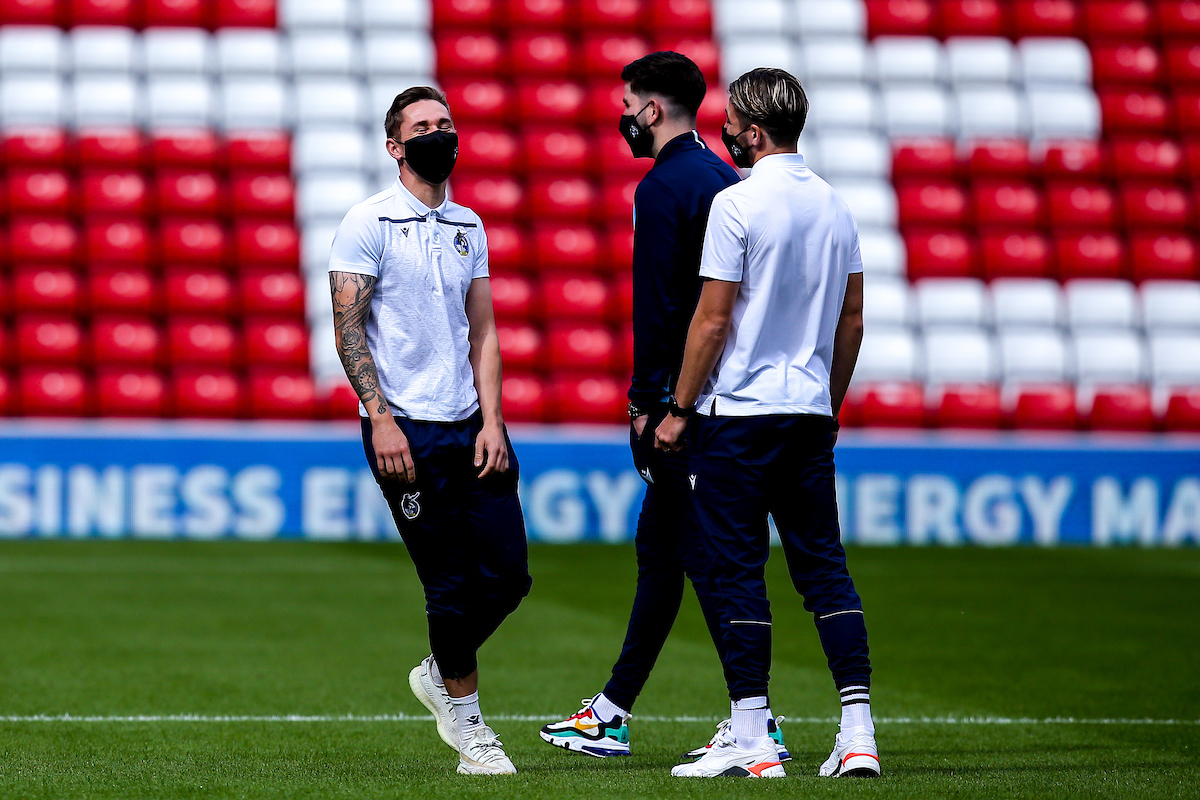 The headline in the team news came in the form of Brandon Hanlan, making his debut for the Gas from off, following his signing on Thursday.

Elsewhere, the back three consisted of Harries, Ehmer and Kilgour, with Little and Leahy on the wings either side. Ahead of the defence sat Westbrooke and Grant, with Mitchell-Lawson and Nicholson offering support to Hanlan in attack. 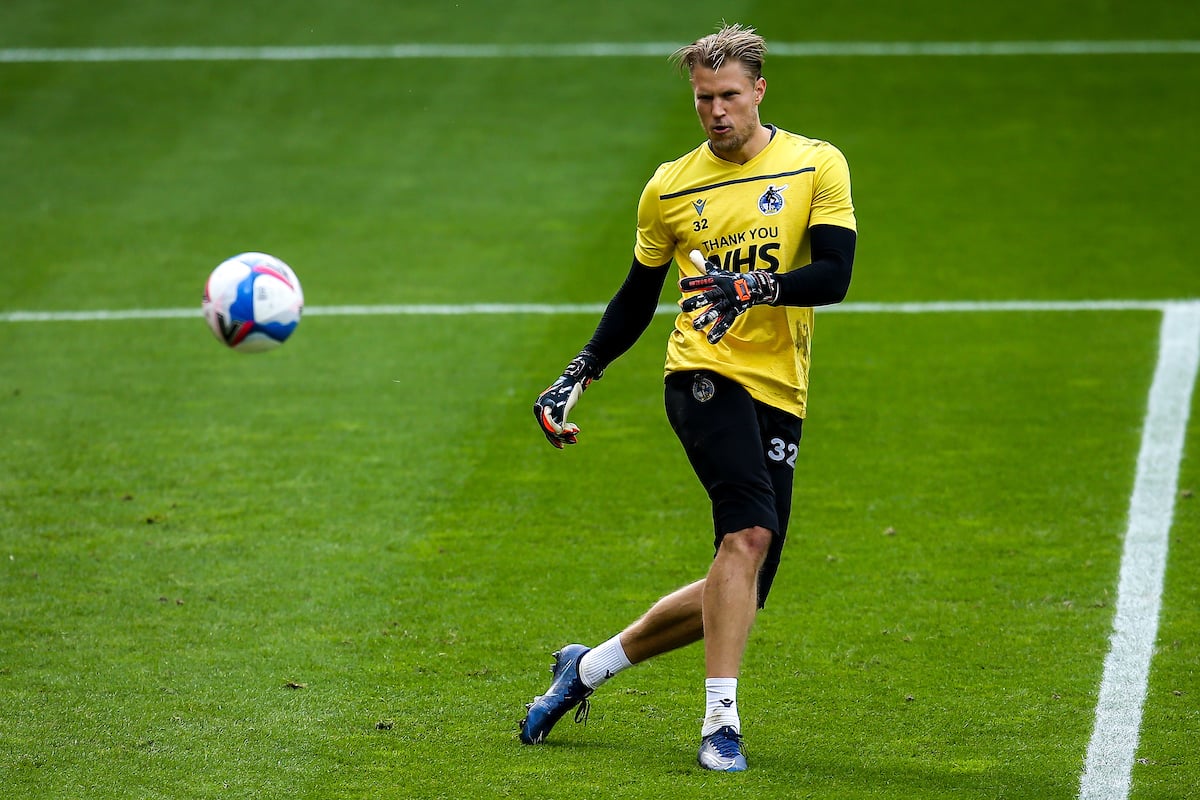 A stadium known for its passionate crowd and loud atmosphere was silent for kick-off at the Stadium of Light with COVID-19 restrictions keeping fans at home. However, the home crowd would've undoubtedly fallen silent as Luke Leahy slammed home a penalty in the opening three minutes.

A scramble in the box saw Mitchell-Lawson get a vital tap on the ball in front of the onrushing 'keeper, leaving the ref' with no choice but to give the penalty as JML hit the deck.

Luke Leahy stepped up as he did in pre-season against Cheltenham, and struck home to give the Gas an early lead. 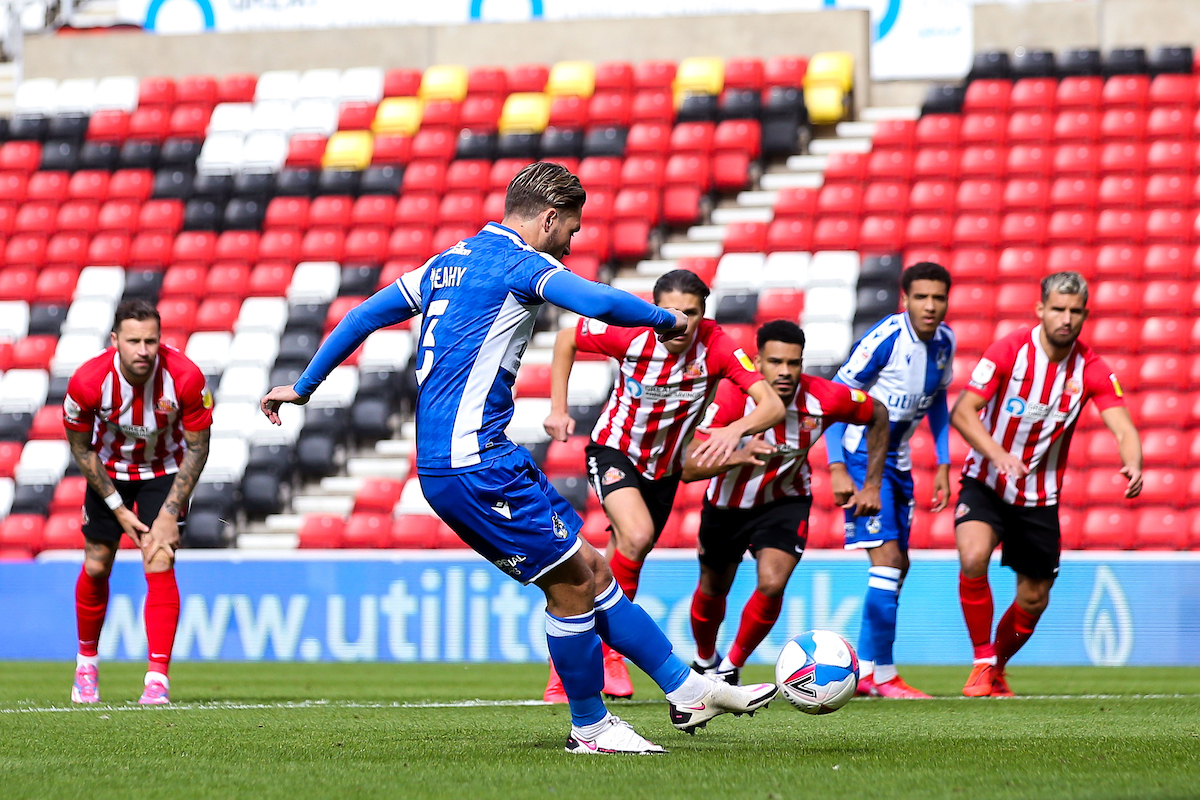 Just past the tenth minute a combination of Mark Little and Anssi Jaakkola was needed to keep out a dangerous effort from a sharp angle. The pair scrambled to make a crucial block on the line and see the ball away.

Denver Hume forced a smart save from the returning Anssi Jaakkola as the half-hour mark approached, shooting from the left apex of the box towards the top left. However, the Fin was awake to the danger and covered his corner well, tipping over the bar.

Minutes later Luke O'Nien carved out a good chance for himself, jinking inside off the right flank before curling a left-footed effort on goal. A crucial deflection was enough to divert it clear of Jaakkola's net.

The chances around the half-hour mark were the last of real quality, as the Gas took the 1-0 lead into the break. 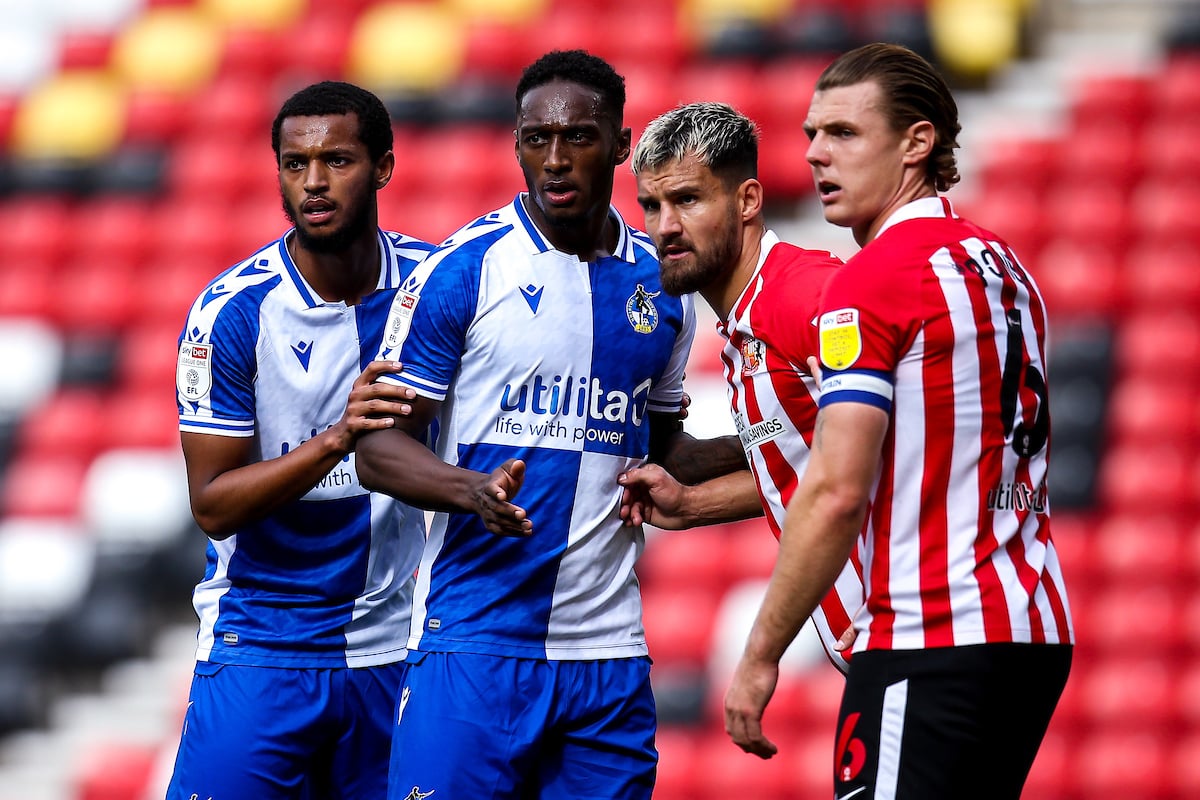 Jaakkola had to be alert to a dangerous Maguire strike in the opening phases on the second half, stretching to his left to palm an effort round the post. 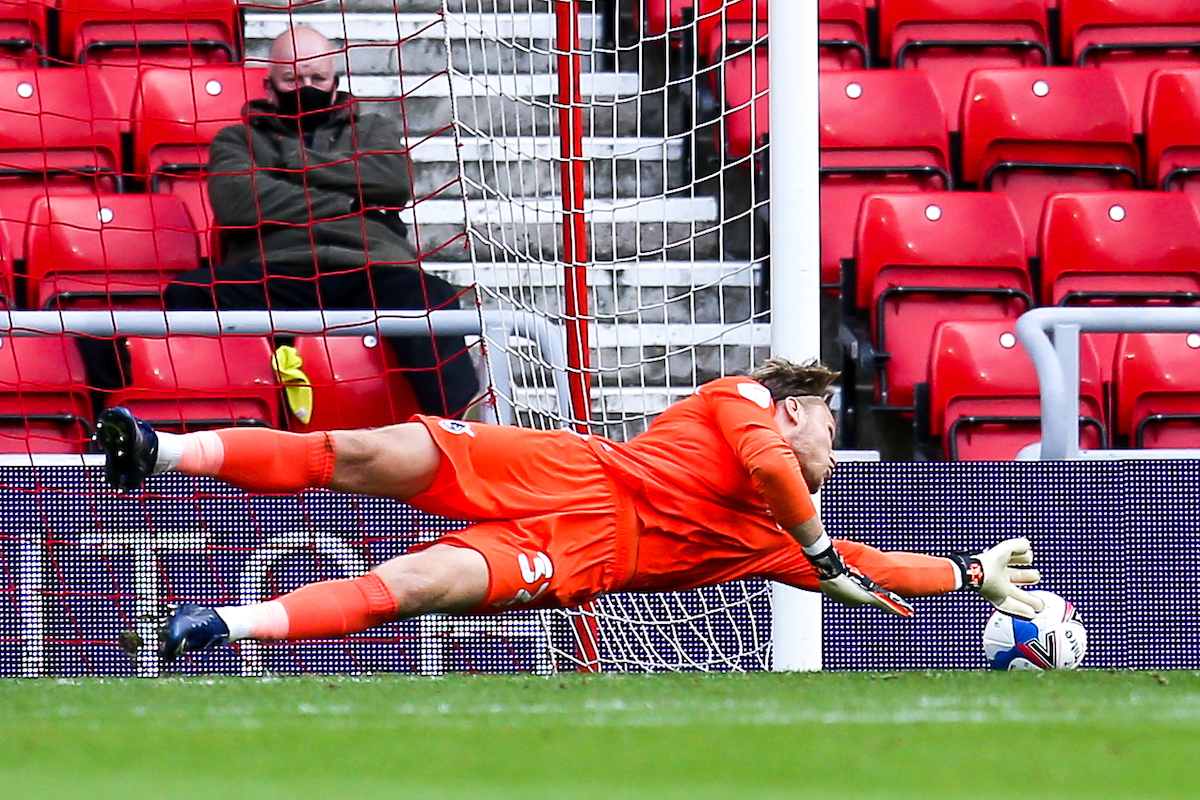 Just past the 50th minute, Hanlan went down off the ball, appearing to have some tightness in his leg. Ayunga came on for the forward, bringing the number 9's debut to a premature end.

With an hour gone a well-competed flick-on from Ayunga appeared to be setting Nicholson through, however, as he emerged from the line and darted towards the ball he hit the deck, appealing for a penalty. This time. the ref' waved away the remonstrations.

Moments later Sunderland generated a great chance down the other end, with a Luke O'Nien cross picking out Dobson in the centre. Allowed to meet it unmarked he should've done better from close-range, instead diverting his header straight at Jaakkola who tipped over.

The Black Cats came up with a half-chance not long after as Max Power struck a speculative effort high and wide on the half volley from 20+ yards. Shortly after, Nicholson was replaced by Hargreaves.

Just after 70 minutes, the Gas made their final change with Leahy being replaced by Tutonda.

Moments later, Ayunga had his first real sniff at goal since coming on, latching on to a smart Harries ball in behind the Sunderland ranks. The powerful forward cut back onto his right and fizzed an effort towards the upper left corner, but 'keeper was more than happy to see it fly narrowly over the bar. 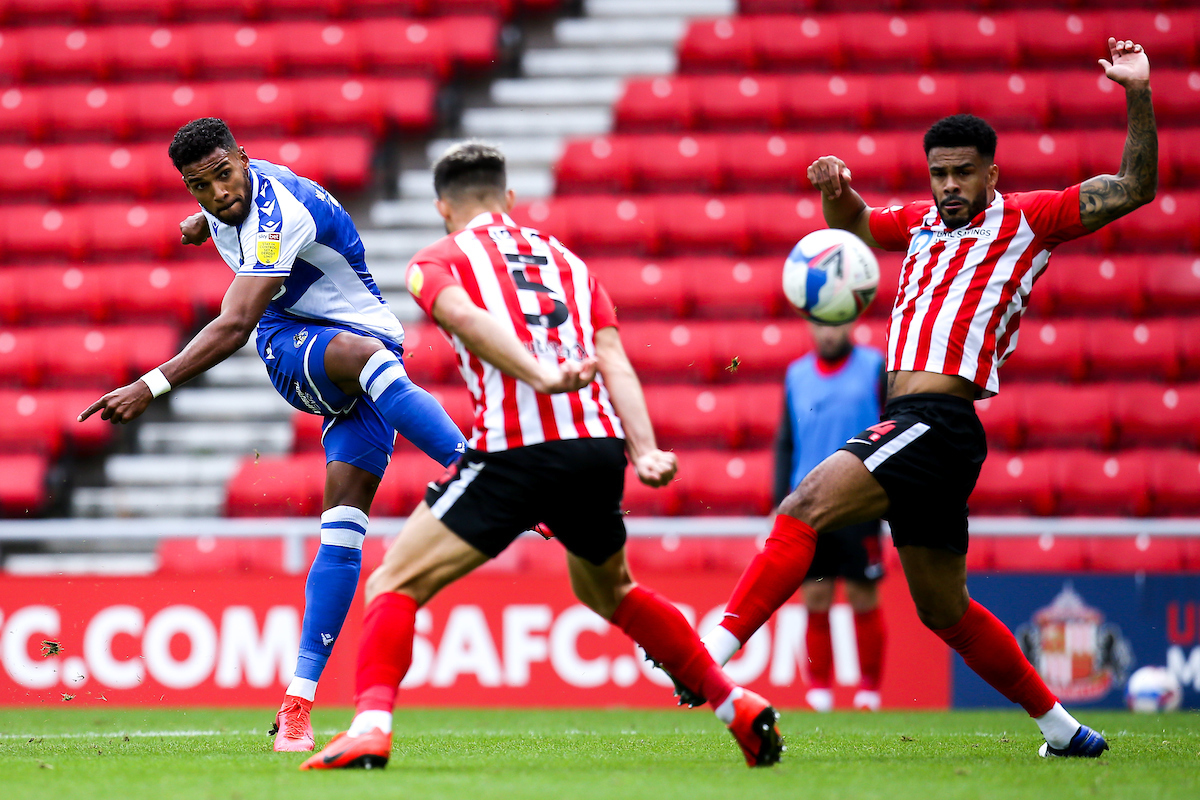 With less than 10 left, Chris Maguire dug out a superb effort from just outside the box that flashed through a sea of Rovers defender past Jaakkola to level things up.

Inside five minutes to go, a superb Jaakkola save was needed to keep things level as Max Power struck a phenomenal effort from distance. It was equaled by the Fin in goal though, tipping the strike onto the post before it ricochetted away.

Max Power kept knocking for a winner, seeing a close-range effort sliced off the line by Mark Little as the game descended into added time, of which there were 8 minutes.

Late on, George Dobson saw red after he went over the top of the ball in a challenge of Mitchell-Lawson, with the young winger lucky to escape without injury. 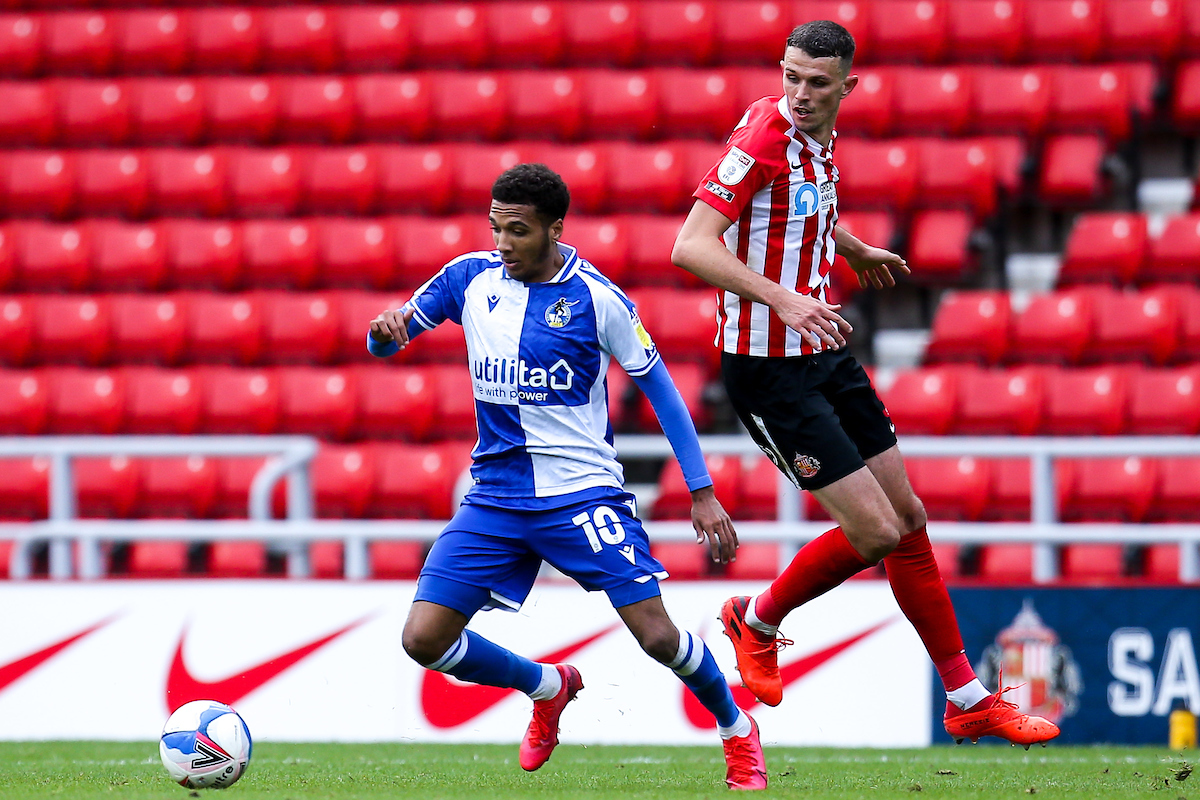 The Gas host Ipswich Town a week from now in their first home league tie of the season.