Rovers fall to defeat on the road by a single-goal margin, as Swindon Town net a second-half winner...

A set-piece would prove to be the Gas' undoing in Tisdale's first outing as manager. A smart free-kick from the left flank found the danger area, with Brett Pitman heading home. 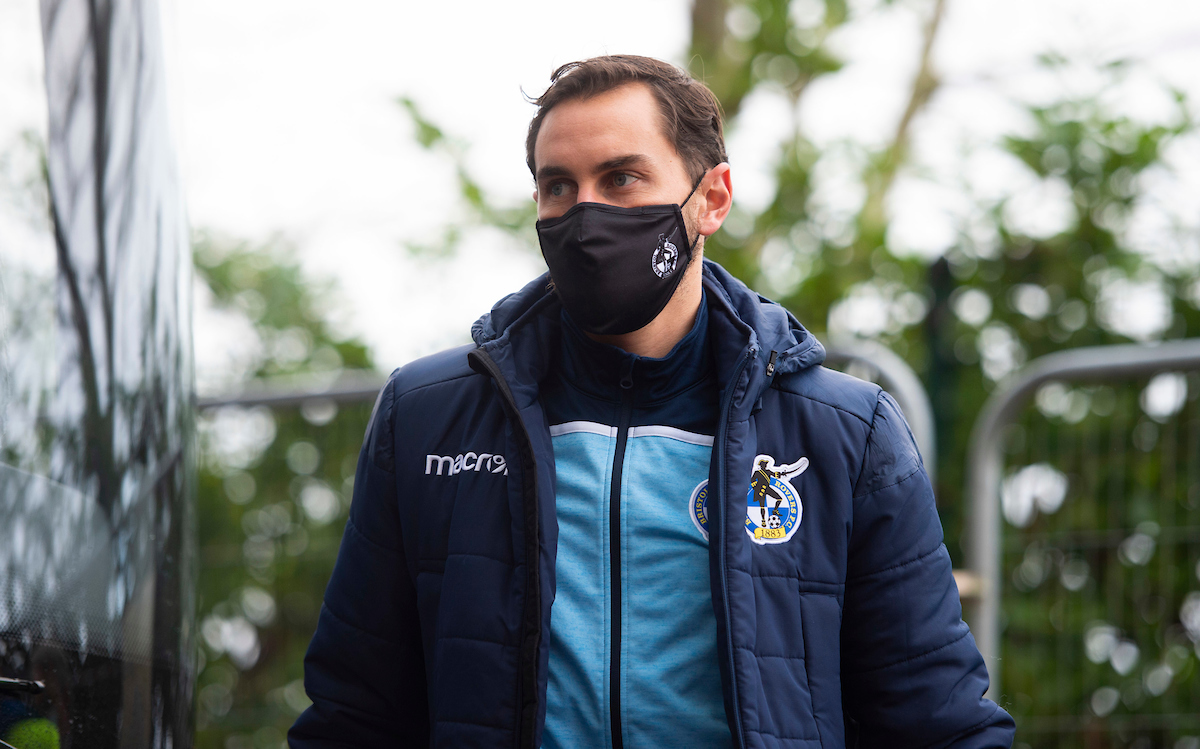 The relentless nature of the League One calendar meant Tisdale had just one day on the grass with his side ahead of their shortest trip of the season.

The former-midfielder chose to make five changes from the Gas' last league outing, with Jaakkola, Tutonda, Kilgour, Upson and Nicholson all coming into the side. 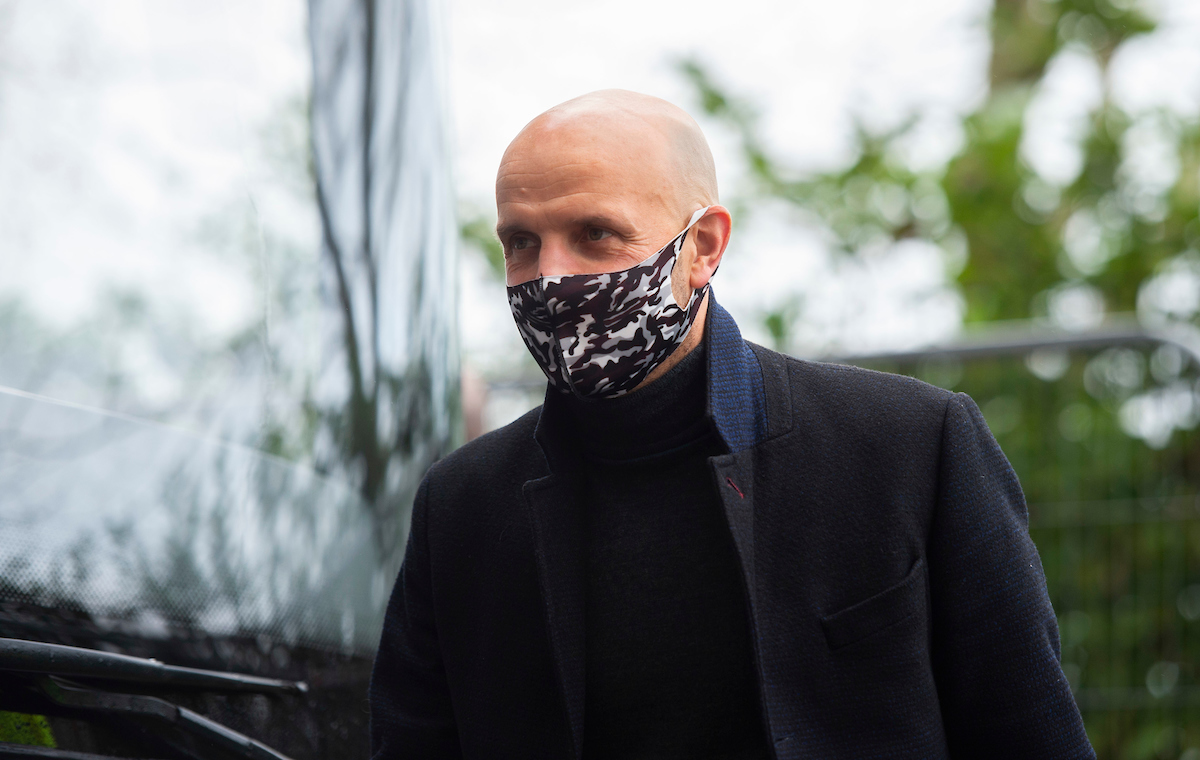 Games like this truly make the absence of the traveling Gas the most apparent. A local derby, an infamous away end, a new man on the touchline. A perfect storm for a raucous Rovers section embedded in the town of Swindon, except for the deafening impact of COVID-19 restrictions.

Still, expectation rested firmly on the shoulders of the Gas' starting eleven, knowing a performance was needed to kickstart their 2020/21 campaign as they got proceedings underway at the County Ground. 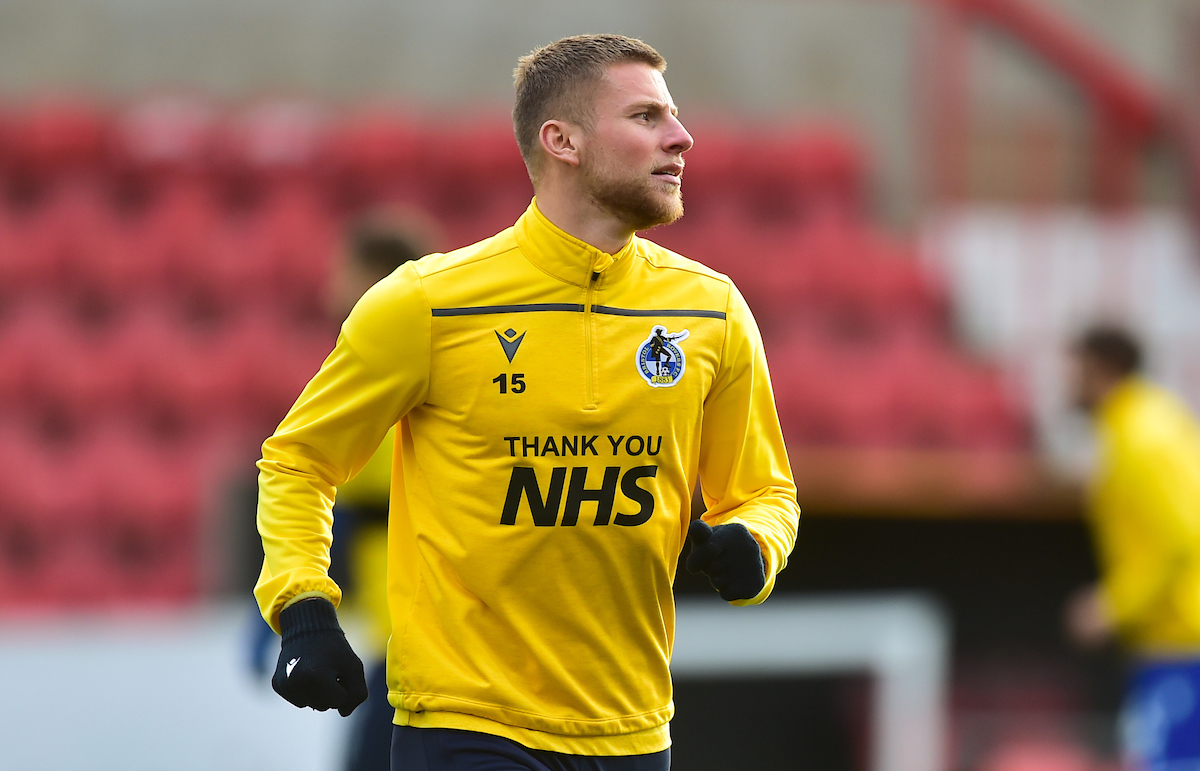 The game started without much consistent possession for either side, Sam Nicholson went the closest, with the Scotsman flicking Ed Upson's corner just over the bar.

Hanlan did well the harry two of his Swindon counterparts following a looped ball from Josh Hare not long after. His pressure gave him a half opportunity, but a powerful clearance from the opposition ricochetted into the striker and back to the 'keeper.

Jack Payne got the first effort of note-off for the home side, striking a low effort clear of Jaakkola's left post, the Fin, fresh back from international duty, seemed unphased as it rolled some wide by some distance.

A shout came for a penalty on the 20th minute as Kilgour prodded the ball from Hallam Hope in his own area, Hope went down under the contact but the ref' waved away the protests.

Moments on, Jack Payne once again got a shot away from the home side, dropping into a pocket of space between Hare and Kilgour before unleashing a curled shot on the turn. Jaakkola watched it with a bit more concern than Payne's previous strike, but it still went high and wide.

Rovers carved out a chance of their own in retaliation, with Sam Nicholson breaking at pace through the heart of the midfield. He rolled a pass wide to Hanlan who took a touch before attempting to slot a strike in at the far post. However, he dragged his shot somewhat, through the legs of a stretching defender, seeing it roll wide left. 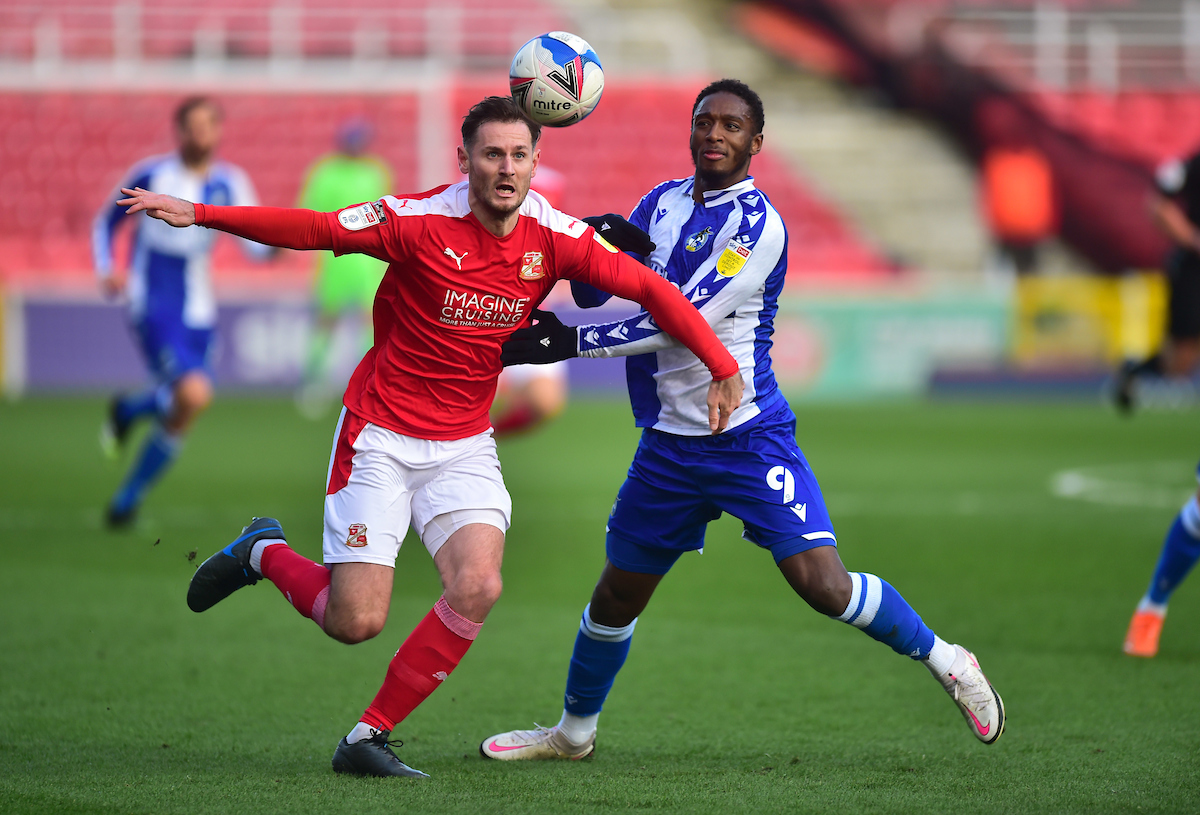 The Gas continued pressure, with a short corner rolled out the Josh Hare in familiar fashion to previous set-piece routines. Hare delivered his usual quality, with Kilgour tasked with keeping the pacey ball down with his strike on goal. The centre-back couldn't direct it properly though, and his right-footed volley head clear of the bar.

Kilgour got himself on the end of another set-piece at the half-hour mark, heading an effort over the bar while under pressure.

Brett Pitman was picked out by a flat ball over the top not long after, with Kilgour called into action at the other end to get a crucial touch on the ball to deflect Pitman's effort wide as he struck from an angle.

With 8 minutes remaining in the half, Donohue went into the book for a very poor challenge of Josh Hare. 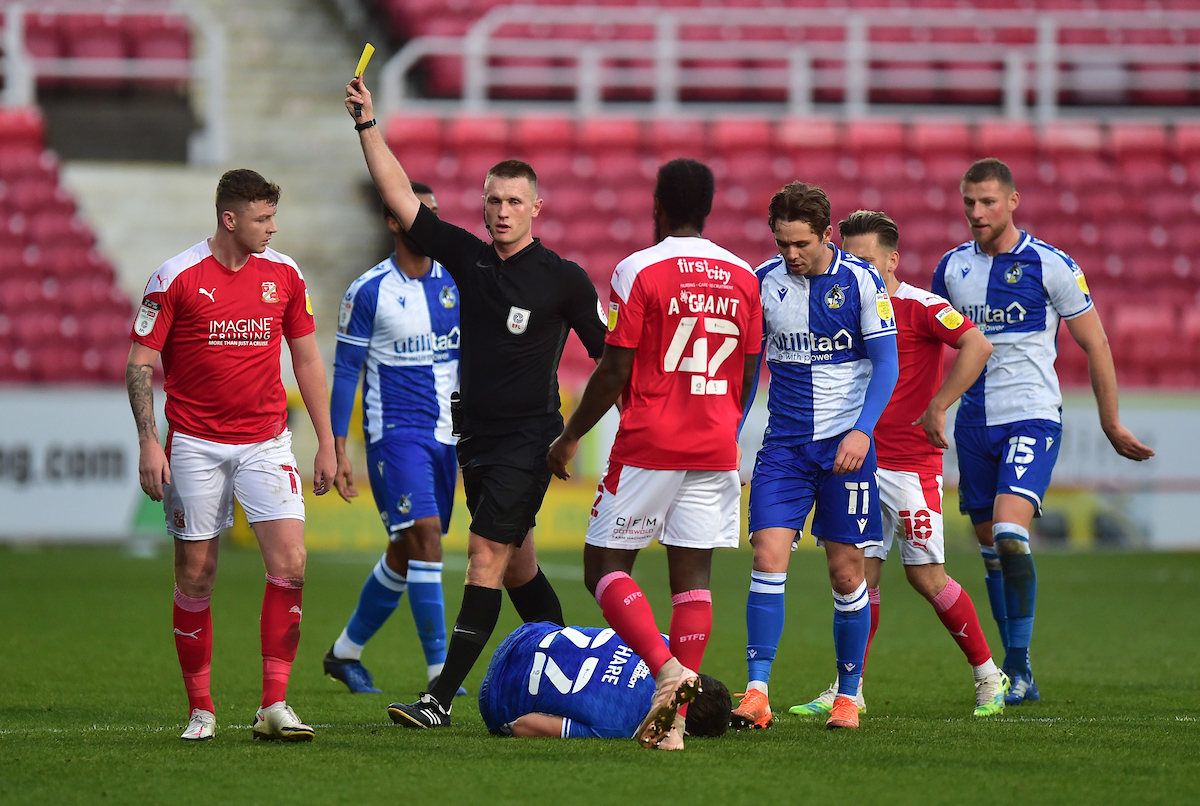 A collision between Grant and McCormick prompted half-shouts for a penalty from the Gas, as McCormick appeared to be on the ball in the Swindon Box when Grant collided with him. The ref' paused play, but not to award a penalty, as the Swindon defender went down in pain as he hit the deck.

The injury would be the last point of interest before the half concluded, with the deadlock still in place. 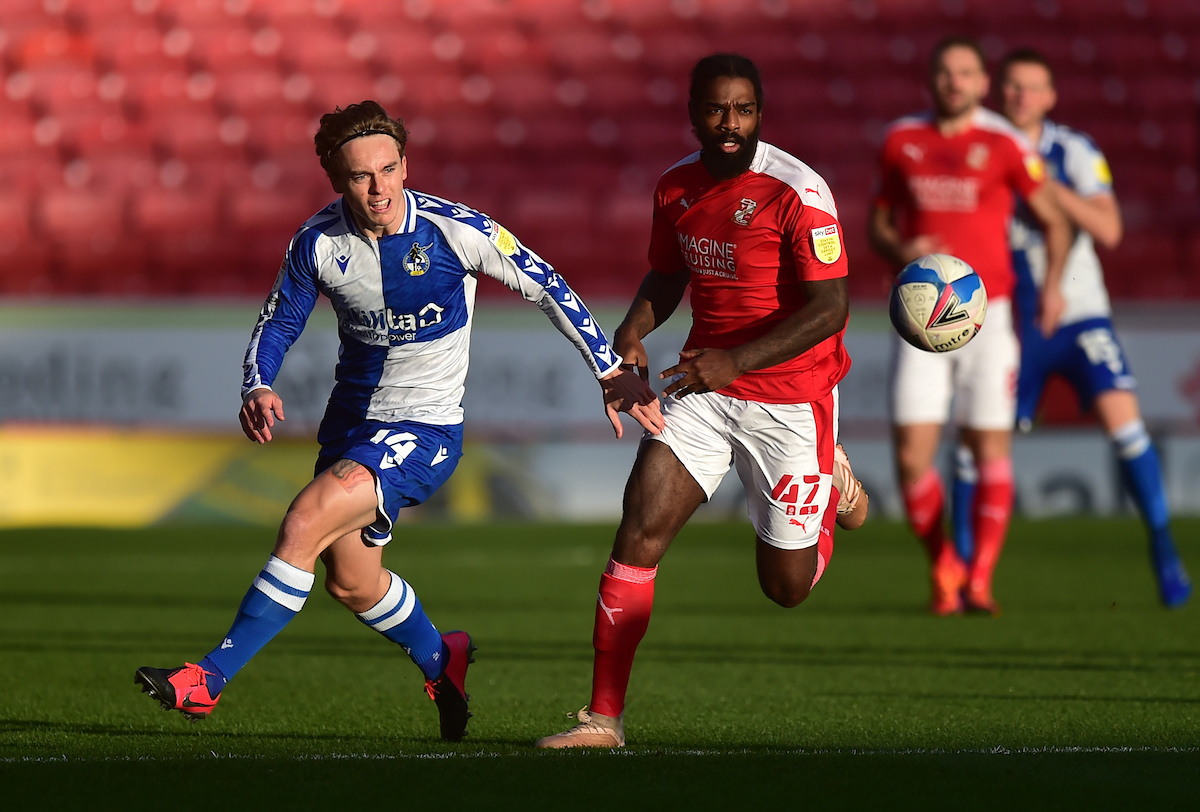 A half-time tweak saw Cian Harries step more into a defensive midfield role, ahead of a back four.

The extra presence in midfield really benefitted the Gas, with Hanlan picking up the ball deep early in the half before spraying it to Grant on the right apex of the box. He lashed a strike towards the far post but saw a deflection take it for a corner.

The delivery that followed saw the ball bounce around the area, with Ehmer flicking a dangerous looped header back across the box. However, nobody in quarters could capitalise, and Swindon cleared.

With an hour gone, Swindon received their second booking with Grounds going to ground for a tackle on Nicholson. Not long later, Odimayo went into the book too.

Hallan Hope managed to graft himself a knockdown around 20 yards out as the clock hit 65, attempting to finesse the bouncing ball into the top right corner. As he looked up to see Jaakkola leaping though, he saw the ball narrowly miss his mark.

A dangerous cross needed a touch from Tutonda at the back stick soon after, with the wing-backs cushioned tap almost taking it goalbound.

With 15 to go, a free-kick on the left flank was delivered into the danger zone, with Brett Pitman getting enough contact on it to divert goalwards and past Jaakkola, to put the home side in the lead.

Not long after, Sam Nicholson pulled a Swindon player back in frustration and received a booking. 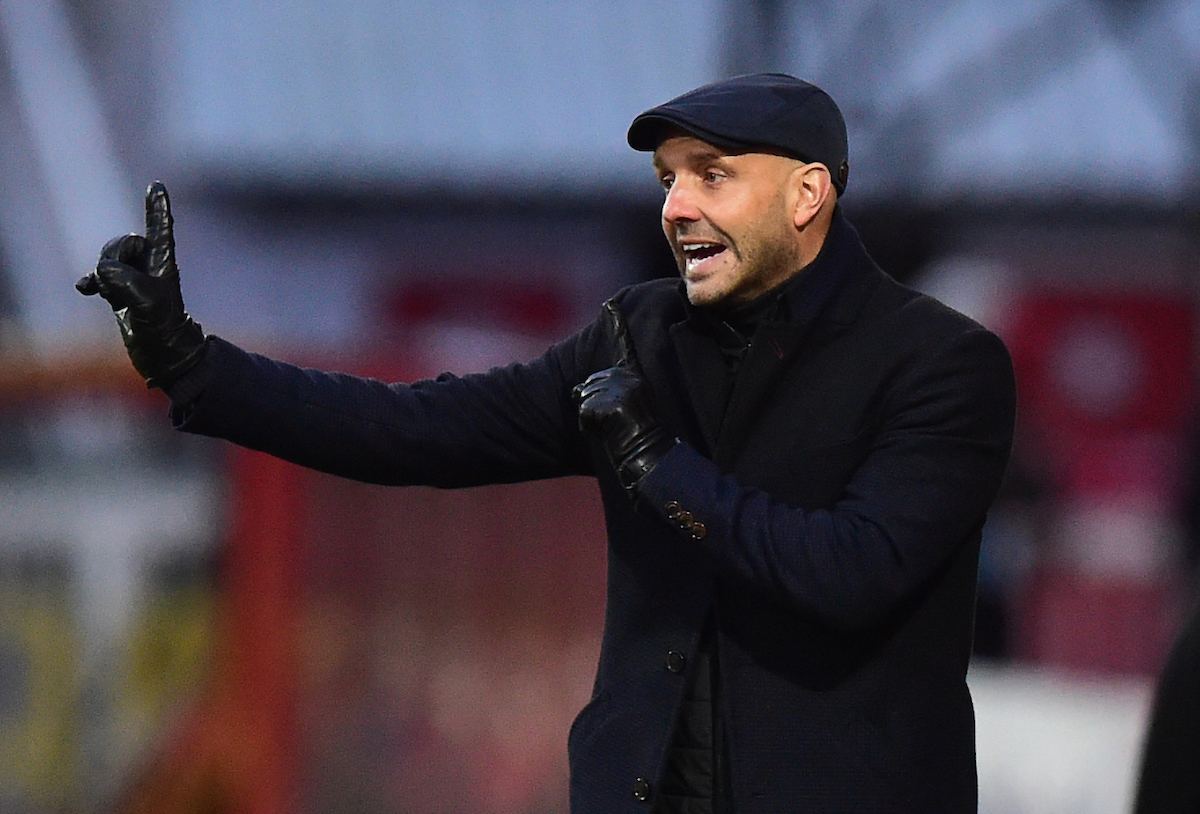 McCormick forced a great stop from Kovar in the Swindon net with less than 10 minutes to play, as Grant contested a crossfield ball. It fell to the Chelsea loanee who struck low and hard, but saw Kovar get behind it and palm clear.

Moments later, Tutonda skillfully found space on the left flank before whipping in a good delivery. Nicholson met it at the back post but could only direct his head onto the post and wide for a goal-kick.

Hallam Hope hit a bobbled effort over the bar not long after, with the Gas then making two changes, McCormick and Tutonda withdrawn, for Baldwin and Koiki. 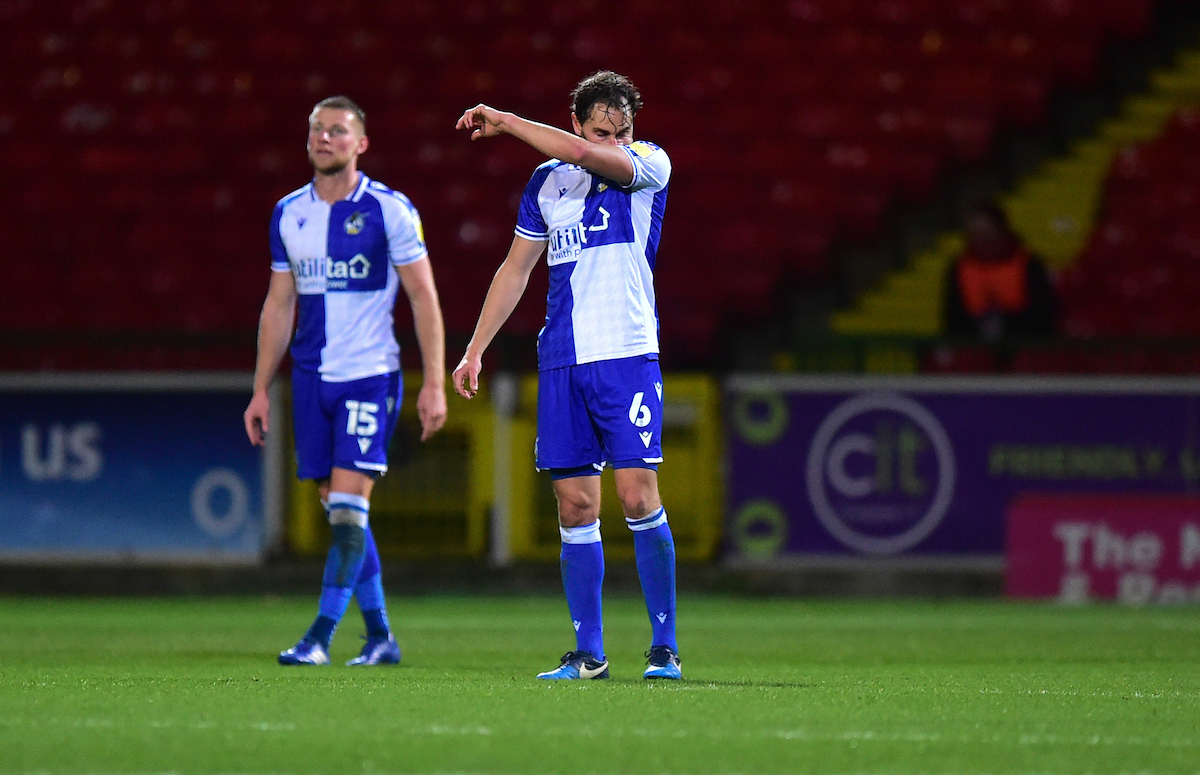 The Gas head on their travels again on Tuesday, with a trip to Wigan Athletic awaiting them.