The Gas secured a 1st Round win against Walsall, to continue their 2020/21 FA Cup journey...

Garner's side found reward for superb first-half play through a set-piece in the end, with Jack Baldwin opening the scoring with his second goal of the campaign as he headed home from a corner.

Five minutes later, Rovers went for the jugular, with Brandon Hanlan whipping a phenomenal right-footed strike into the bottom right corner from the edge of the box.

Rovers did well to hold off against a series of Walsall attacks in the second half, but a set-piece would be their undoing late on, with Lavery heading past Jaakkola with minutes to play.

However, the slender one-goal remained to see the Gas into the next round. 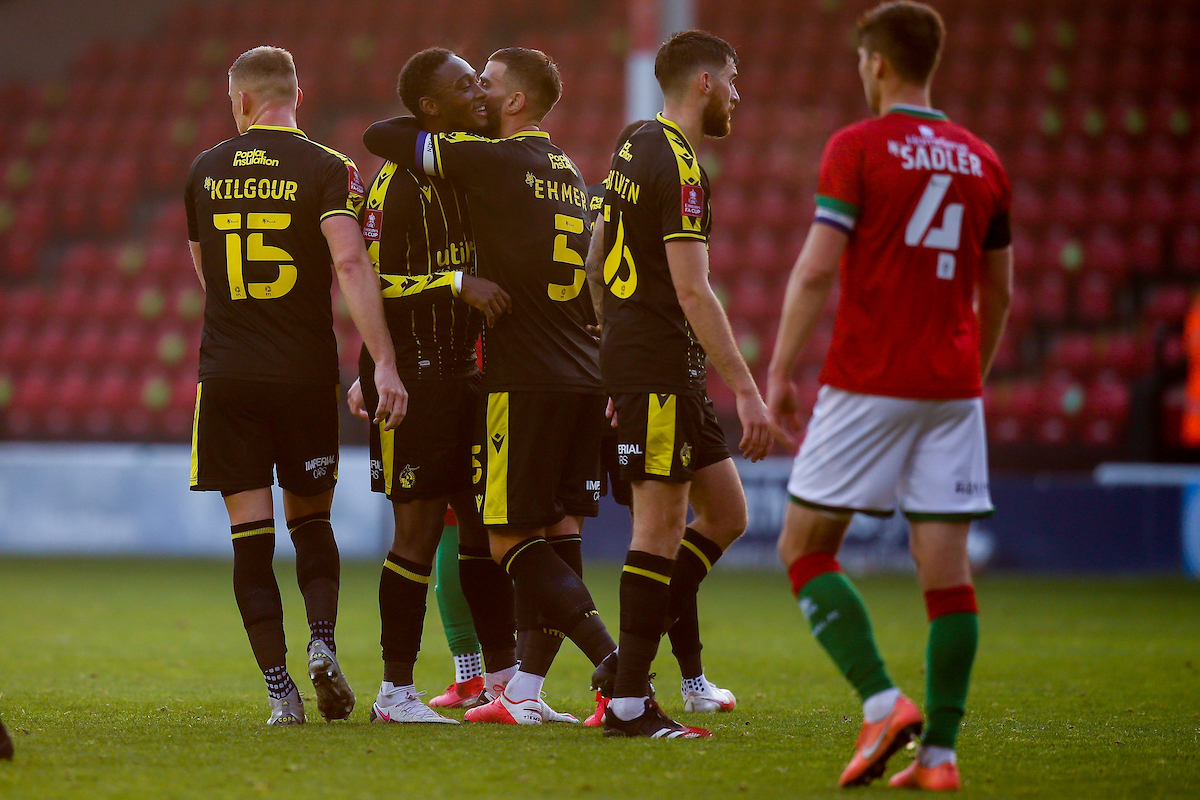 Rovers were looking to book spot in the Second Round of the competition for the fifth time in a decade and faced a Walsall side that had lost just once so far this campaign.

In naming his Walsall side, Darrell Clarke opted to include former Rovers midfielder Stuart Sinclair in his line-up for the tie.

Ahead of kick-off, both sides paid their respects towards fallen British soldiers, with a minute's silence before the game got underway. 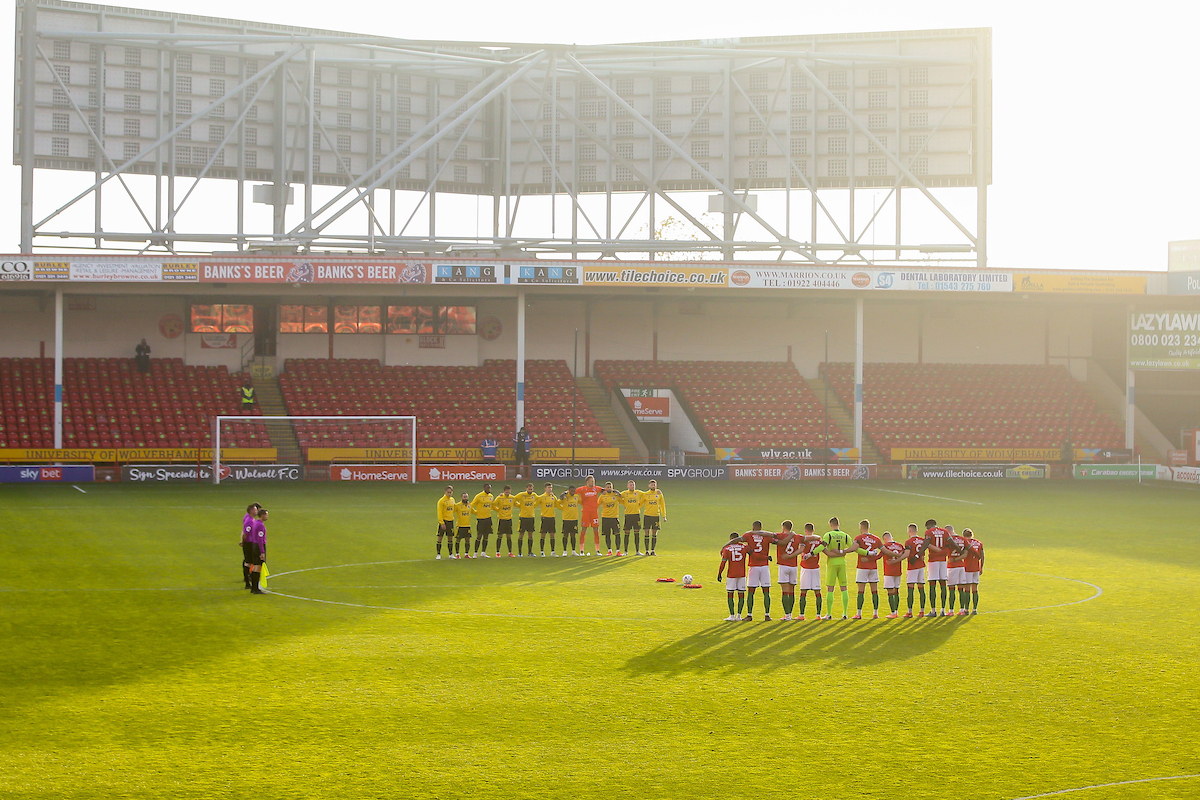 The opening couple of minutes produced a booking in an intense start to the game, a break through Hanlan saw Zak Jules pull the summer signing back, and receive a yellow card for his endeavors.

Moments later, a smart bit of misdirection from Westbrooke allowed the creative midfielder to slip Oztumer in on the left side of the area. The Charlton-loanee opted to try and place the ball into the bottom right, but narrowly missed the target.

The Saddler's first chance of the game came through the aptly named Mat Sadler, who found himself on the end of a deflected free-kick at the back post. He attempted to volley the ball, but his contact was weak, knocking the ball wide of the left post.

Nicholson, who scored in the Gas' last trip away from home, had a half-chance just after the 10-minute mark, cutting sharply inside onto his preferred left foot and toeing an effort towards goal. However, he dragged it into the side netting. 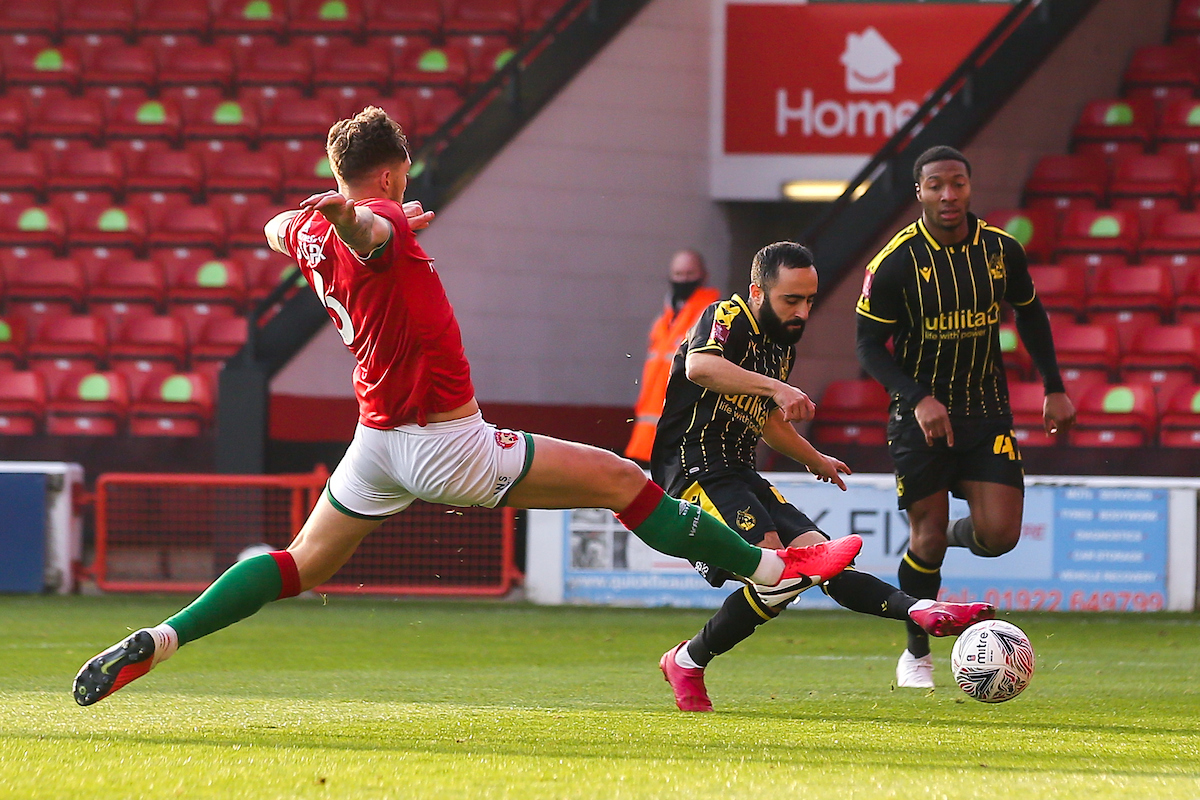 Midfielder Ed Upson was next to catch sight of goal, hitting a first-time effort from the edge of the box after a pull-back from Nicholson. A Walsall deflection almost took it goalwards, but in the end it looped narrowly over the bar.

The resulting corner caused more drama, as almost the entire Rovers side shouted for a handball on former Gas midfielder Stuart Sinclair, inside the box. The ref' waved away the protests.

Pressure continued for the Gas as a cross from Luke McCormick traveled dangerously across the face of goal. With Brandon Hanlan diving, it took a deflection but looped through the personnel waiting keenly, and rolled out wide.

20 minutes in and Rovers still couldn't find their way onto the scoreboard, despite some quality play. It was Nicholson who would produce the next nearly-moment, with Oztumer slipping the Scotsman in on the right side. The wingback flashed a pass across goal, but somehow nobody from either side got a touch, and it once again found its way into safety on the flank.

After a quiet 10 minutes following that chance, the Gas found a goal when it looked like they were just beginning to waver. Brandon Hanlan fought hard to win a corner in the left corner, rounding his man before seeing a cross deflect out. Westbrooke's delivery found Alfie Kilgour at the back stick who did well to loop his header back into the mixer, there, Jack Baldwin waited to header into the right side of the net and put his side ahead. 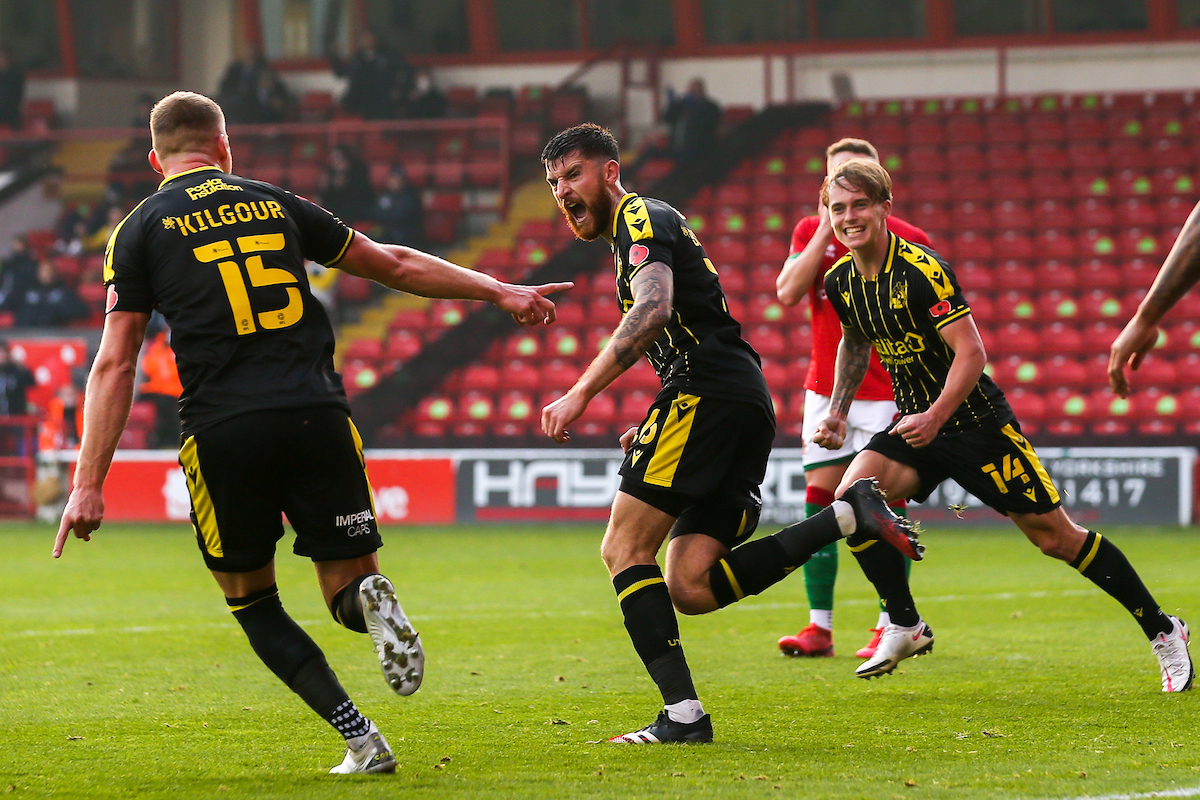 Shortly afterward, Walsall had a corner of their own, with Scarr sending a bullet header straight at Anssi Jaakkola in the Rovers net.

A goal of sheer class came before the break. Oztumer rolled the ball back neatly to Brandon Hanlan on the edge of the box who took a smart touch to the right. There was only one space for the strike, in the bottom right corner, and he found it perfectly. A superb curled effort kissed the right stanchion as Hanlan ran away celebrating before the ball even nestled in the net, he knew there was no stopping that. 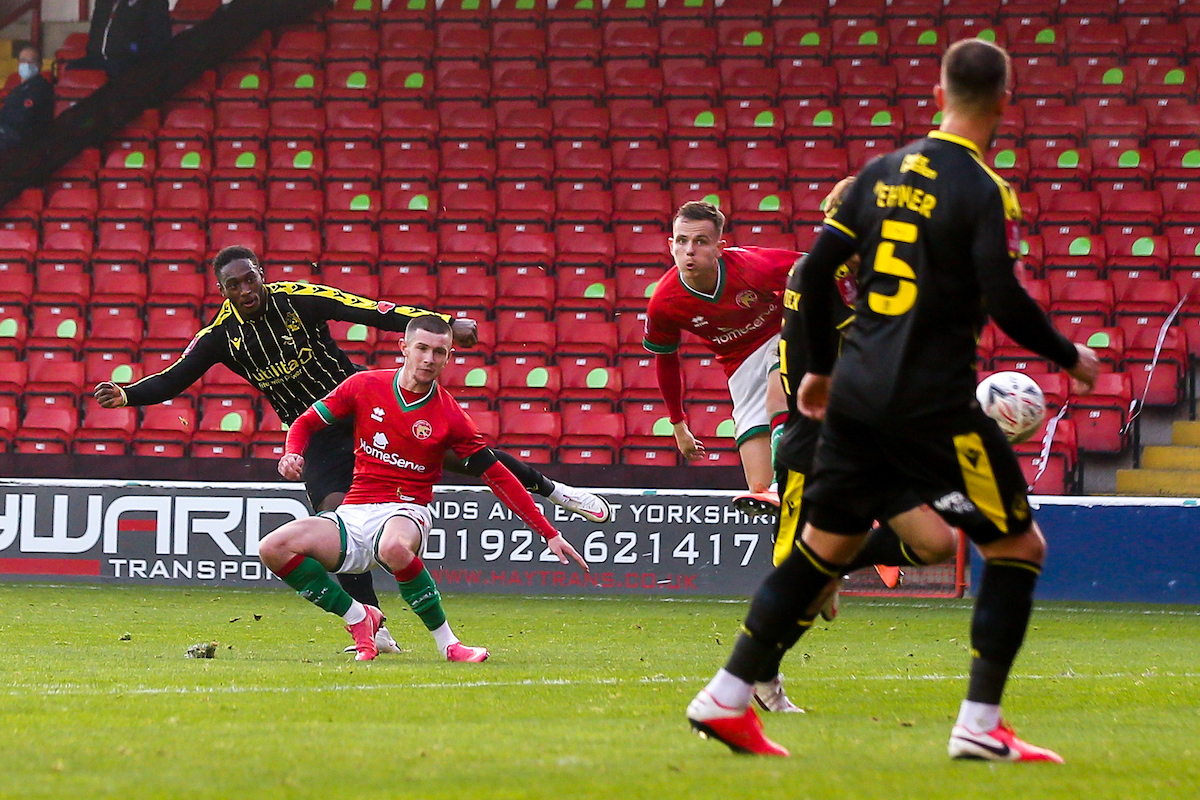 Caolan Lavery was on the end of another Walsall headed chance in response to the goal but sent his effort wide at the back stick.

The Gas settled on their first-half work during the late stages, but saw their two-goal lead threatened seriously late on. Elijah Adebayo cut sharply past a Rovers challenge in the box but found the onrushing Jaakkola with his strike, who's vital touch sent it wide of the post. 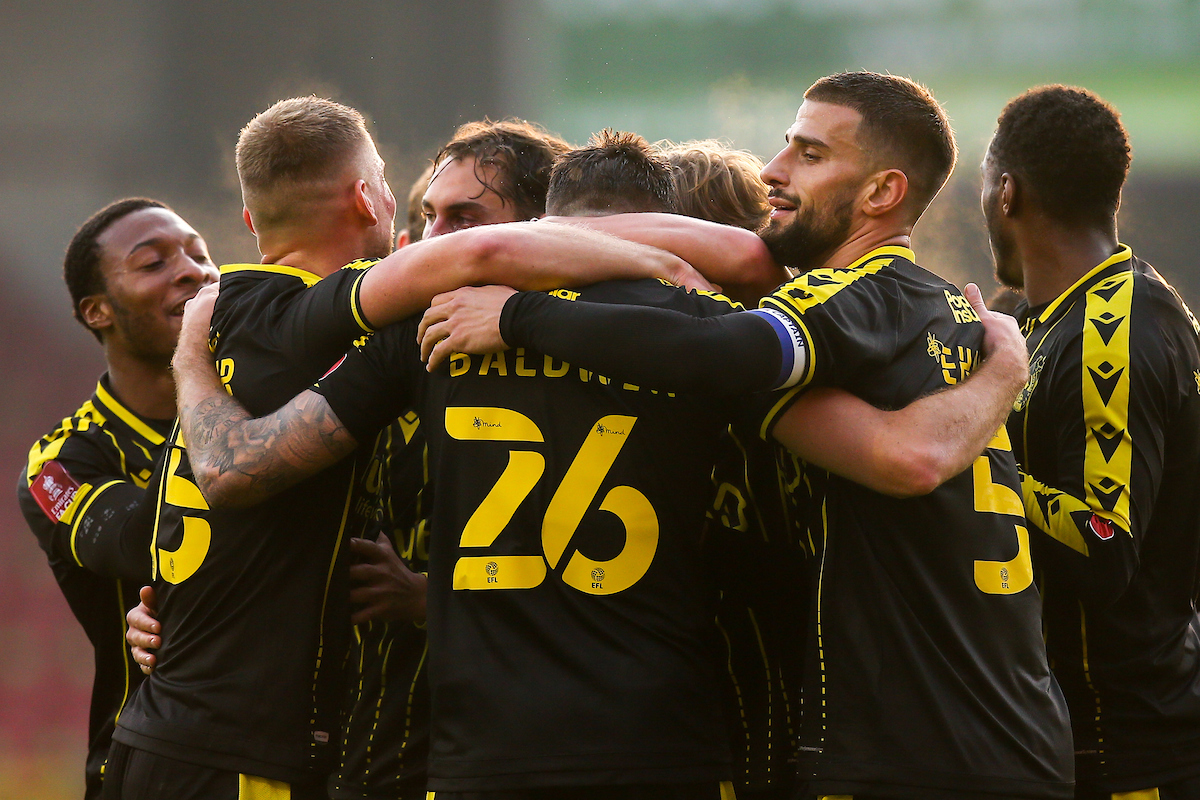 The second period didn't start as brightly as the first, with the game becoming quite cagey in the opening stages of the second 45. Alfie Kilgour picked up a booking early on, for pulling Adebayo back on the break.

Rovers eventually got going, sniffing the chance to kill off their opponents early on as Koiki whipped a dangerous cross from the left side. The deflection was unusual, taking it closer to goal, but it ended up looping kindly for the home side, and pst danger.

Hanlan then burst into the area a few minutes later, looking for his second of the day. Approaching goal from a 45-degree angle on the right, he sold his marker with a lovely step-over before flashing an effort into the space made. However, the strike wasn't as accurate as his first, swiped wide on the near side. 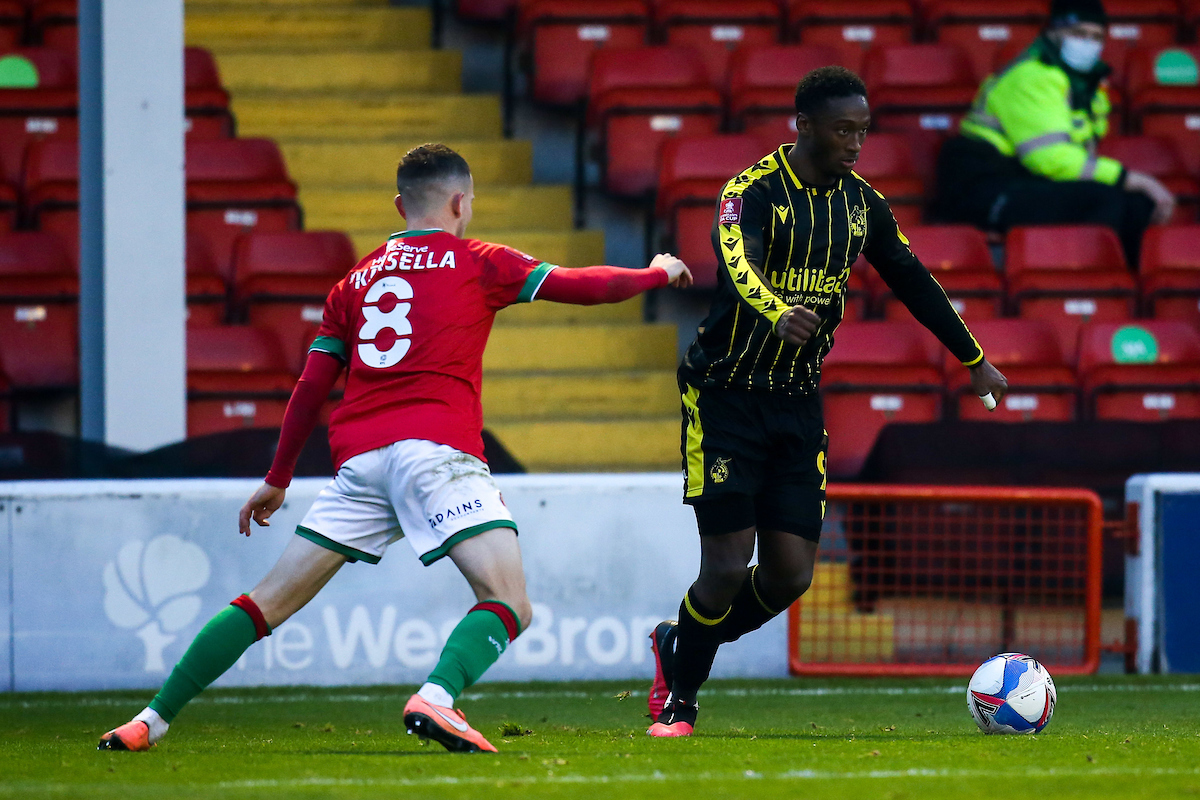 An unusual effort from Oztumer prompted a bit of Walsall panic as the game headed towards the hour mark. With the ball set up for a crossing position on the right flank for a free-kick, the midfielder opted to strike a dipping shot towards goal, but the 'keeper remained alert to it, with Roberts collected well.

As the game edged towards 70 minutes Wes McDonald forced a superb stretched save from Anssi Jaakkola. A number of stabbed Walsall efforts went in before the ball was re-worked to McDonald in space. He dipped an effort goalwards, just under the bar, with Jaakkola tipping it over at full stretch.

Caolan Lavery would be the next to strike an effort on the Gas' goal, with a stepover making just enough room to lash a shot on goal. He aimed for the near post and saw it rebound viciously back off the stanchion and away. 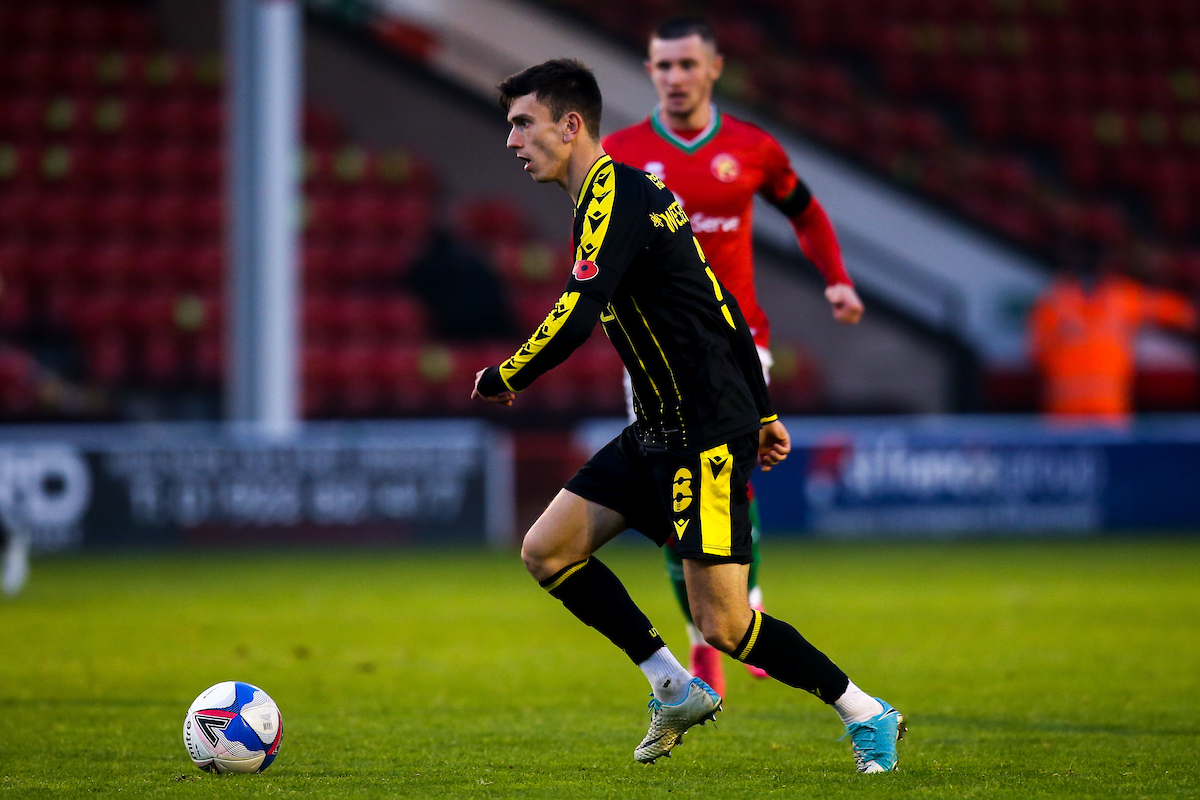 These changes seemed to settle Rovers down somewhat, with fresh legs from Ben Liddle, and the more defensive-minded Josh Hare helping halt the flow of Walsall attacks.

Walsall sent nerves jangling with five minutes to play as Lavery rose highest to latch onto a free-kick and direct past Jaakkola, game on with a matter of minutes to go.

The six minutes added on didn't help Rovers nerves, as they looked to see out late pressure from the home side.

It was Walsall's goalscorer, Caolan Lavery, who would send one close in added time, getting on the end of another cross but this time flicking the headed effort wide of the right post.

The hearts in stomachs, the Gas held firm to grind their way to progression in the FA Cup. 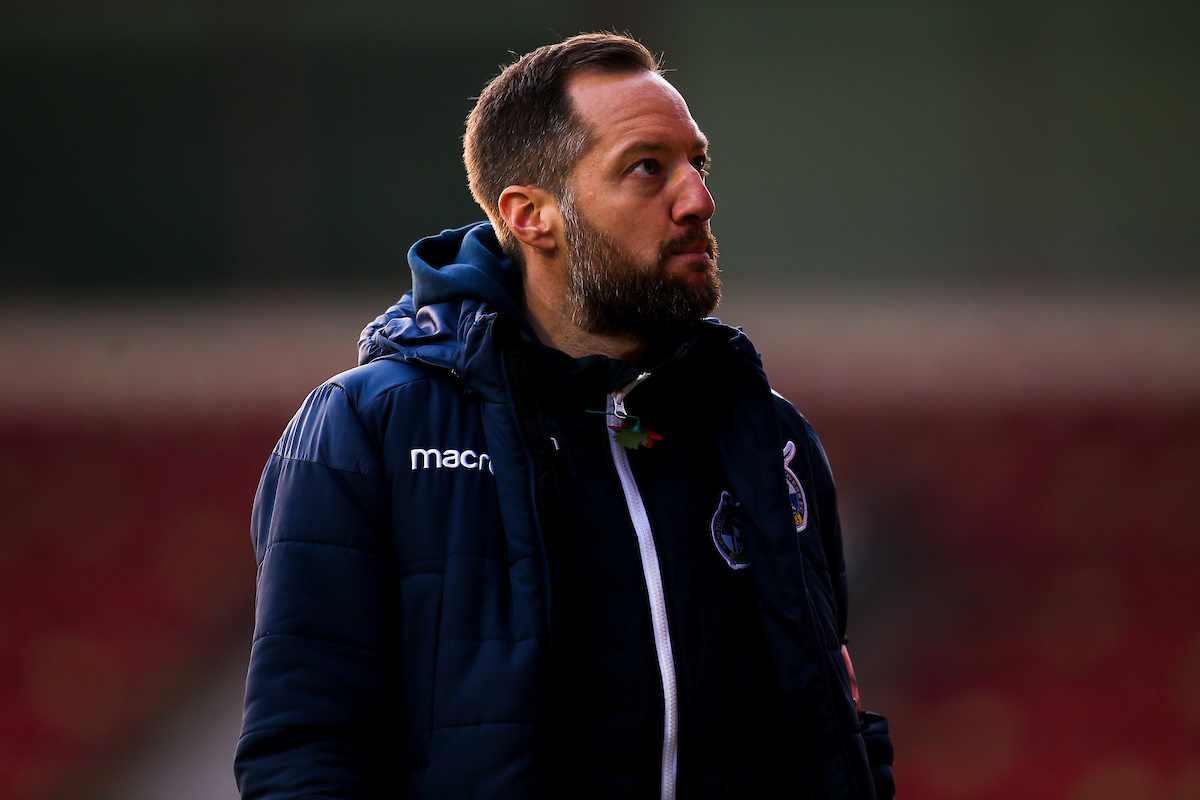 Rovers return to league action next weekend, with Fleetwood the visitors to the Mem. 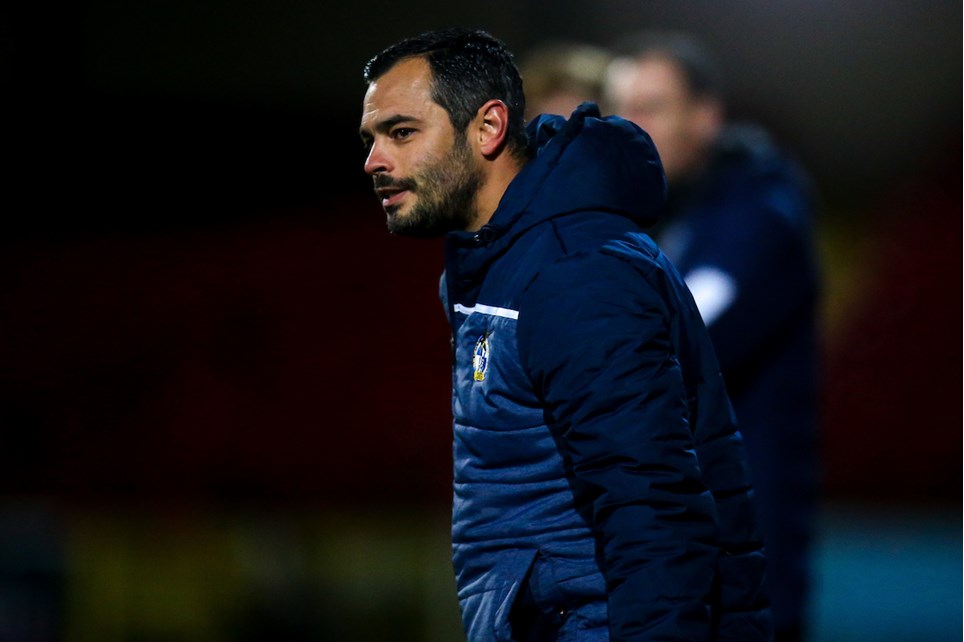 
The Academy U18's produced a comeback to register a point in a 3-3 draw away at Forest Green Rovers. 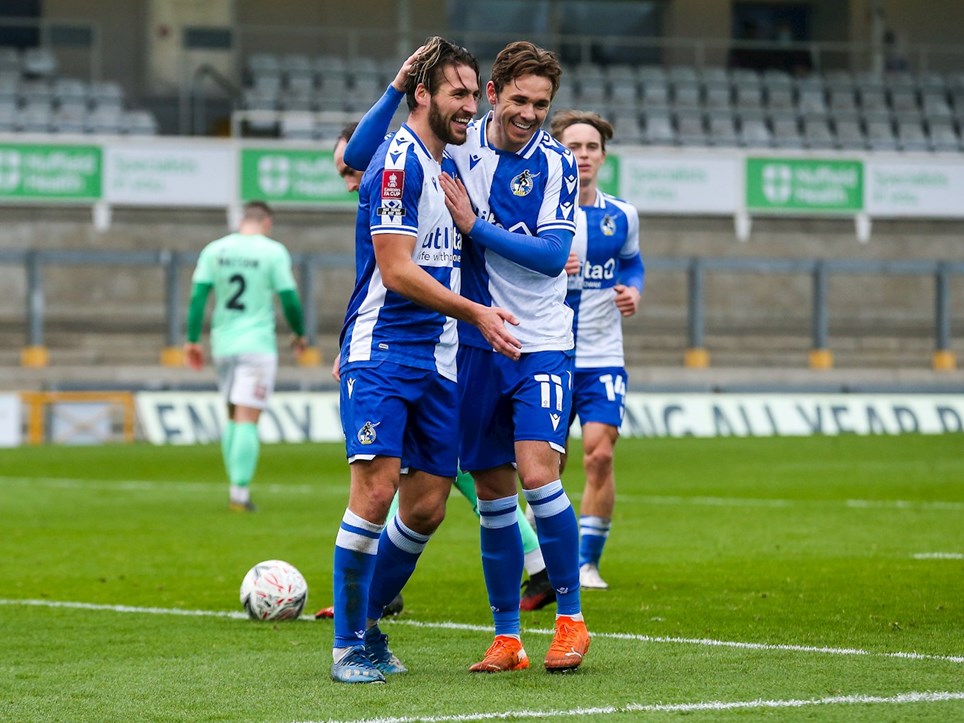 
The Gas secured safe passage into the FA Cup's 3rd round with a dominant display over Darlington. 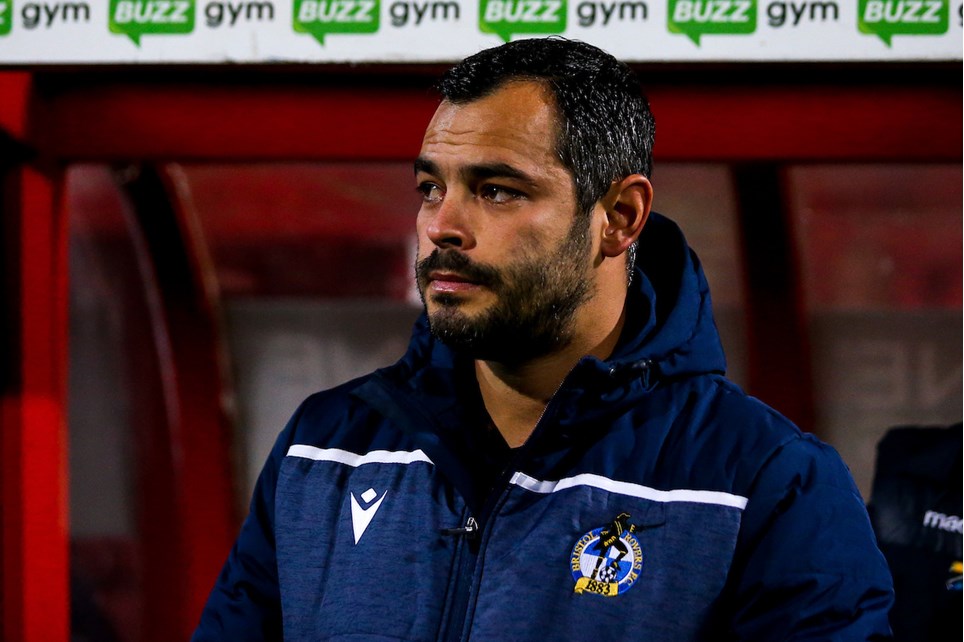 
The Rovers U18s registered a comprehensive win on the road at Cheltenham Town on Tuesday. 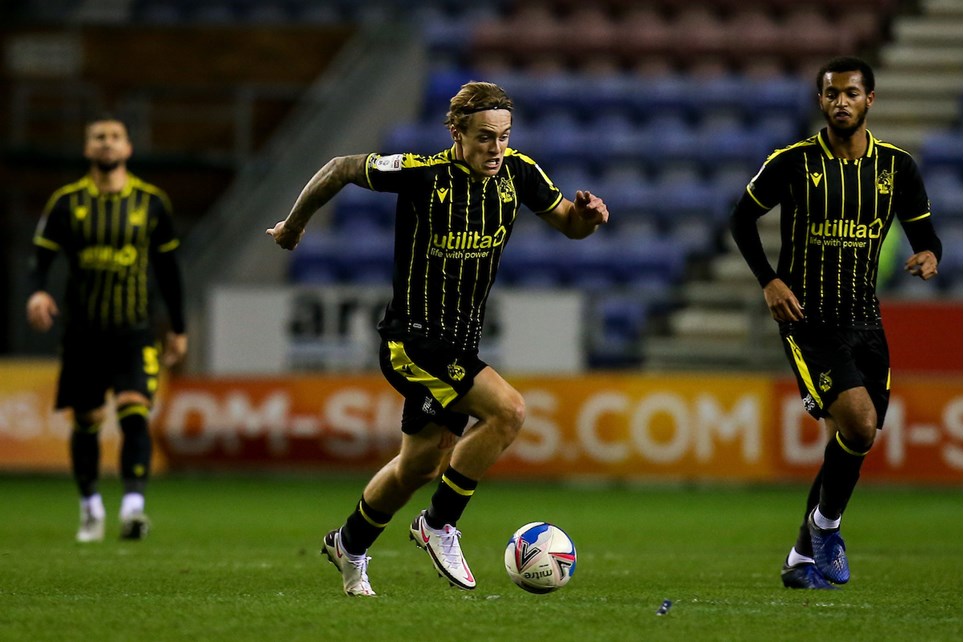 
Rovers forced to settle for a point on the road at the DW Stadium.