Rovers' Leasing.com Trophy journey comes to an end with defeat at the Mem to Stevenage.

Craig Mackail-Smith’s lobbed finish midway through the first half was the only goal of the contest, as the Gas exited the Leasing.com Trophy at the Third Round stage.

The veteran striker pounced on a piece of slack defending and held his nerve to lift a finish over van Stappershoef in the 18th minute.

Rovers held the majority of the possession but tussled to fix chances to level the game. Menayese came close in the closing stages of the first half, but Rovers couldn’t find a goal throughout a frustrating second half.

On the team sheet for the encounter, Rovers boss Ben Garner handed first starts to both of the week’s new additions, as Jayden Mitchell-Lawson and Josh Barrett both featured in the starting XI. 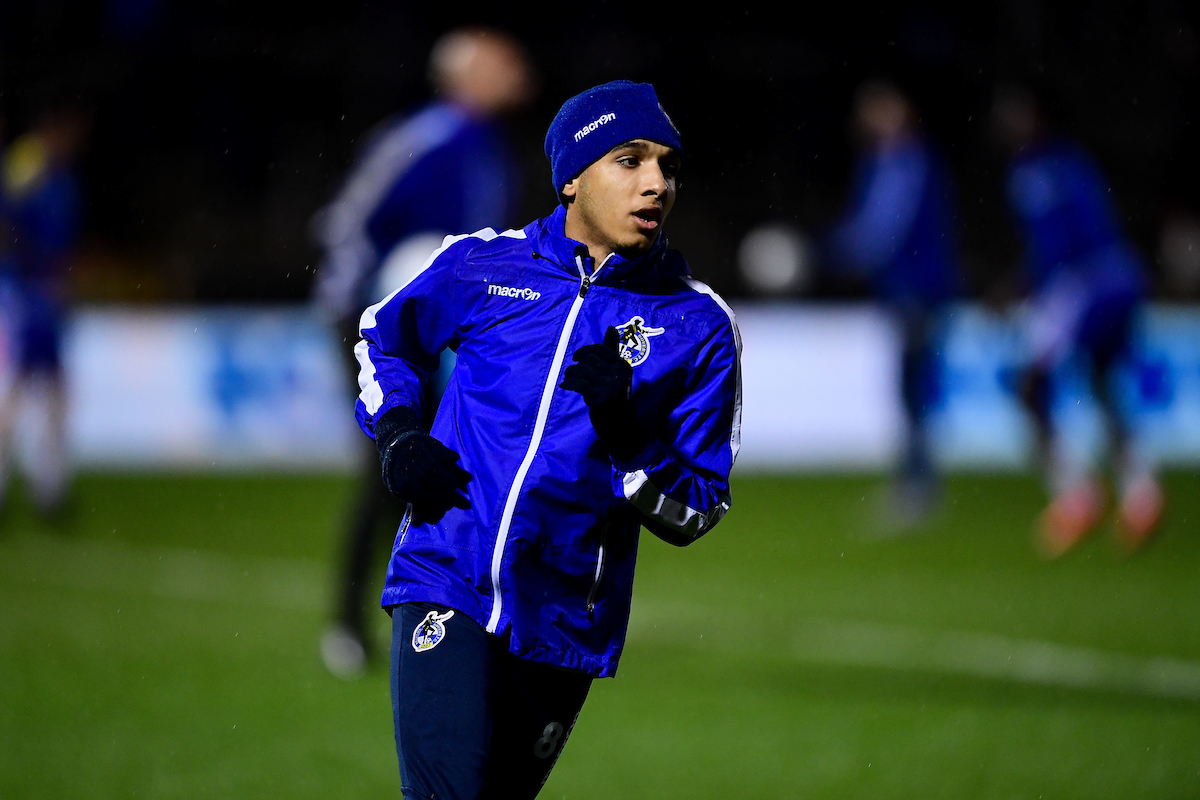 There were, in fact, five changes to the side that faced Coventry City, with Michael Kelly, Victor Adeboyejo and Kyle Bennett also included from the off, as Alex Rodman, Cameron Hargreaves and Jonson Clarke-Harris were all named on the bench.

In what was a tentative opening to the contest, both sides exchanged possession of the ball quite freely, with little in terms of goalmouth action. Alfie Kilgour had a decent effort on goal climb just high over the target, with the defender hitting a sweet strike from outside the area that just carried too much height to test Bastien in the Stevenage goal

After the opening ten minutes ran by, it was a move that involved both of the debutants that crafted the first real chance of the game. It was Barrett that started the move, cutting inside and looking to whip a shot across goal, but the effort was charged down by the crowded cluster of Stevenage defenders, with the rebound deflecting in the path of Jayden Mitchell-Lawson.

The winger managed to lookup an coax a cross the picked out the unmarked Kilgour perfectly, as the defender managed to greet the delivery with a powerful header that narrowly missed both the target and the loitering Adeboyejo inside the six-yard area.

At the other end, just moments later, Rovers had a real let off, as Dean Parrett fluffed his lines just yards out from goal. The Stevenage man was picked out by a low cross from Mackail-Smith and managed to miscue his effort which saw the delivery run across goal. 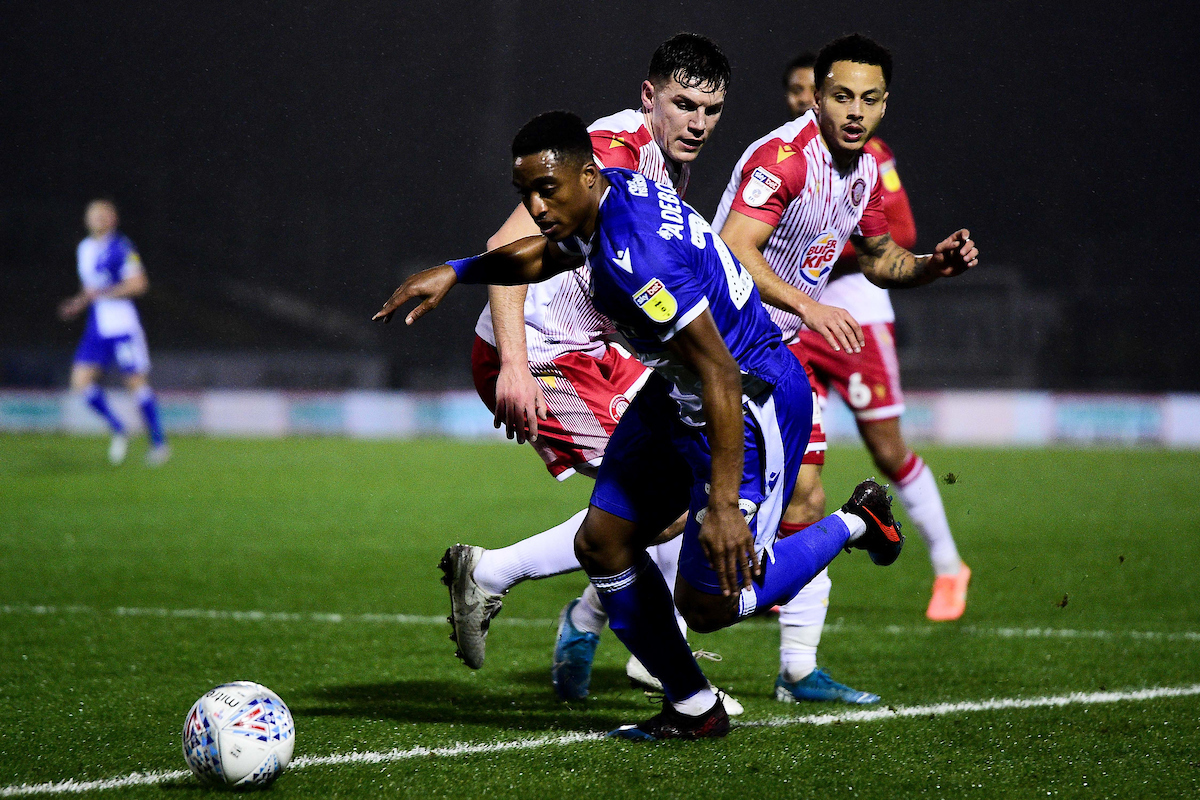 Rovers didn’t as take warning of the early scare and minutes later, the visitors were in front.

It was misdirected header from Menayese that opened the door for the Stevenage attack, as Mackail-Smith chased down the slack header and used the bouncing ball to his advantage – lifting a finish over the clutches of the advancing van Stappershoef to put Stevenage ahead in the tie.

A goal down and looking for a way back into the encounter, Rovers did have lengthy spells of possession, based in and around the final third, but couldn’t forge any openings on goal.

In the closing minutes of the first-half’s action, Rovers had perhaps their best opening to restore balance to scoreline ahead of the interval.

A set-piece from Sercombe cut through the Stevenage back line, with Kilgour getting a useful touch at the near post that very nearly set the ball for Menayese to glance home at the far-post, but the defender missed out by inches one getting a final touch that would have led to his first Gas goal. 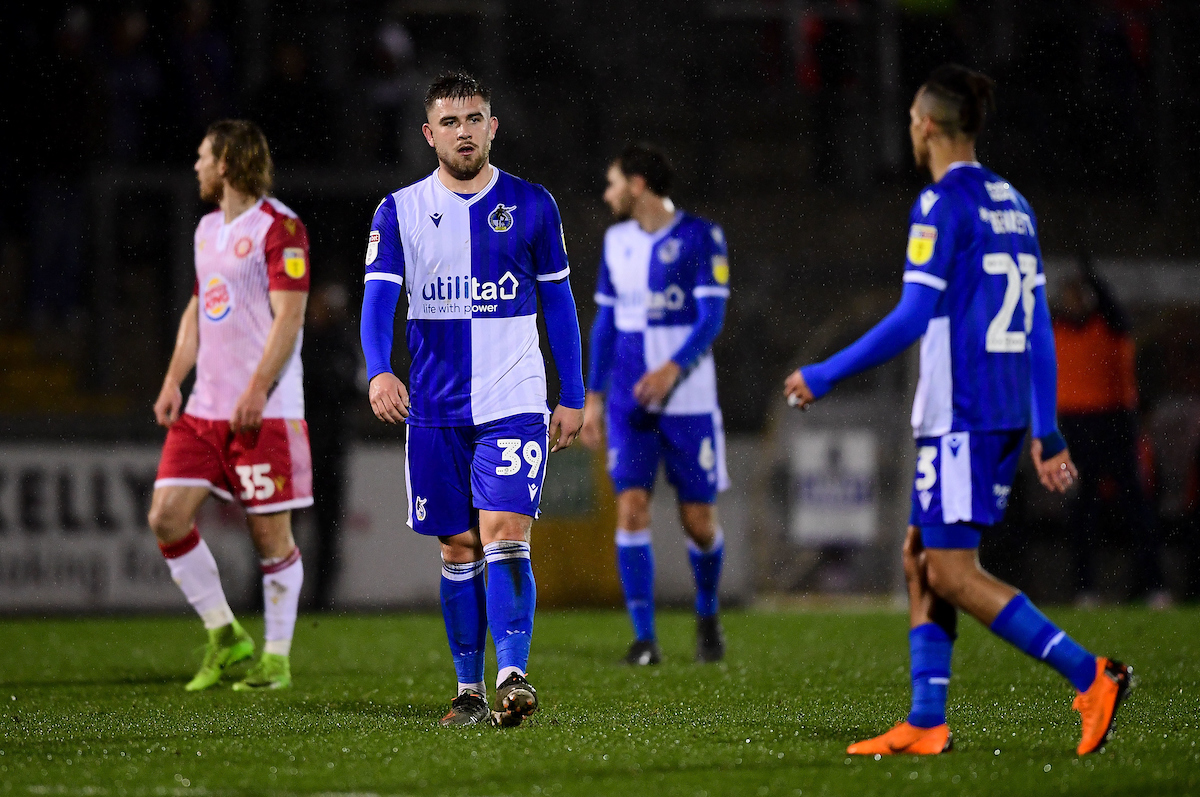 Stevenage continued to frustrate Rovers as the contest restarted and the visitors could have easily had a second goal.

Mackail-Smith once again pounced on slack defending just minutes after the break.  On this occasion, a timely challenge from Tony Craig halted the forward just as he was poised to shoot, as the stand-in skipper executed a perfect example of a sliding tackle inside the six-yard area.

The hour came and went without Rovers able to find a path through the stubborn Stevenage defence.

Lucas Tomlinson was introduced from the bench, with the youngster showing a keen intent to get on the ball and create attacking play.

There were soft appeals for a penalty when Barrett’s ball forward looked set to find Mitchell-Lawson, but the winger was bundled to the ground by Nugent. The referee was swift to dismiss the shouts for penalty, which mostly came from the stands.

With the final twenty minutes of the contest looming, Rovers needed to up the intensity going forward, with Alex Rodman replacing Menayese.

Rodman was involved shortly after his introduction, as the winger cushioned a ball from Barrett back across goal and was able to find Adeboyejo. The striker leapt well to meet the cross, but a lame header was easily claimed by the Stevenage ‘keeper.

Stevenage did muster chances of their own as the tie headed into the pivotal phase of the closing fifteen minutes. Again a chance fell to Mackail-Smith, who had revised run into the area to meet a cut back from Charlie Larkin. The striker’s powerful first-time effort was pushed away by van Stappershoef. 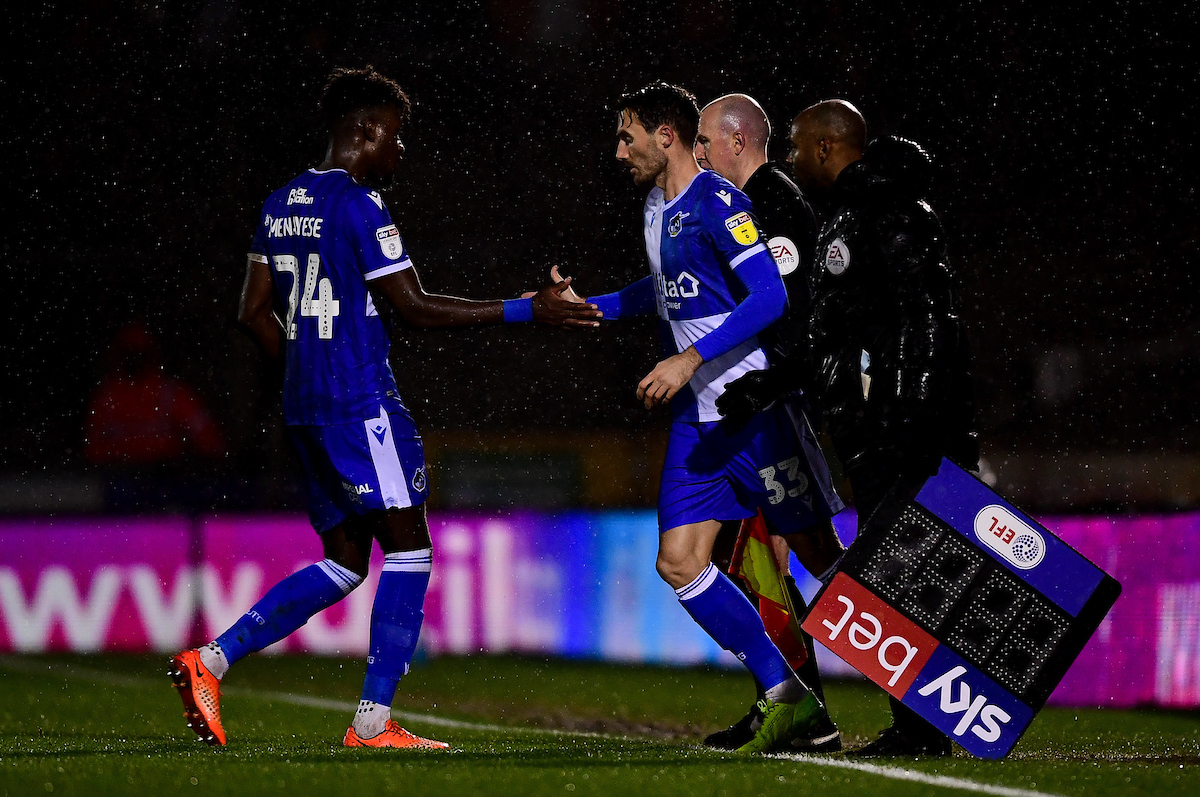 As the final ten minutes arrived Rovers looked to have found the breakthrough they were looking for, as Ed Upson was able to pick out the run of Jayden Mitchell-Lawson, who had darted from out wide into the penalty area.

The winger arrived at the pass at pace and looked set fire home from the edge of the six-yard area, but a last-ditch tackle blocked any attempt of a shot from the playmaker.

With time edging away a long-range effort from Sercombe caused a moment of worry for ‘keeper Bastien, who scampered across his goal to get a hand to Sercombe’s low effort to ensure the effort flashed wide of goal.

Ed Upson was dismissed for a second yellow card in the final minutes, which added to the frustration of the evening. 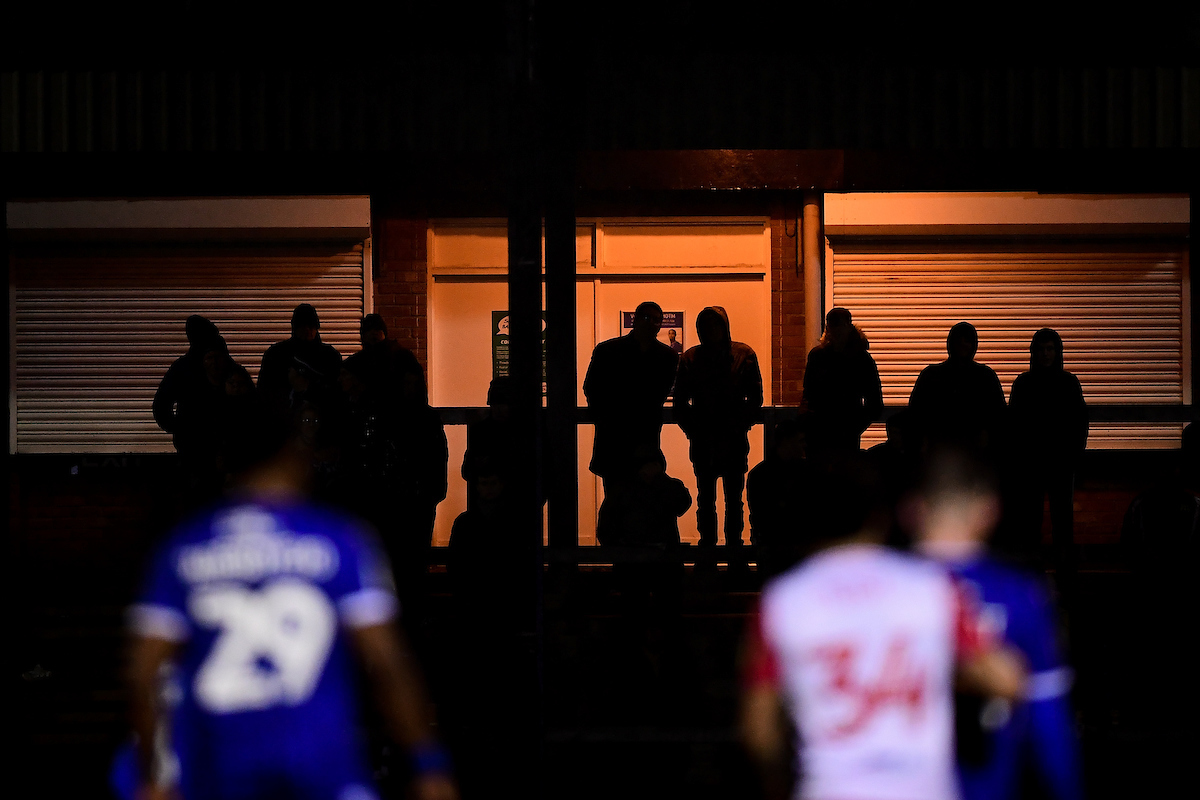 Focus now returns to Sky Bet League One, as Doncaster Rovers head to the Mem on Saturday afternoon.