The Gas go down to a relentless MK Dons display.

The Gas fell to 3-0 defeat on the opening day of 2020 as a dominant MK Dons controlled proceedings.

Rhys Healey opened the scoring through a sharp turn inside the Rovers box before blasting one into the bottom right corner. MK Dons then emerged from the break with more vigor, as Nombe and Kasumu added to the home side's scoreline.

It was just the one change for the Gas from the outting on the 29th of December, with Tom Nichols' second half display enough to force his way back into the team, at the expense of Cameron Hargreaves who also had a game on the weekend.

MK Dons started with the majority of possession, but frequently losing it to Rovers as they looked to breakthrough, however, just inside the 5th minute they found an opening. A lovely ball was rolled in from the right, missing the outstretched foot of Sam Nombe by a fraction and disappearing out for a goal kick.

Rovers had to make an early change, with Jaakkola stretching for a cross and colliding with a teammate, injuring his shoulder in the process. He made way for Jordi Van Stappershoef on the 11th minute.

It was Rovers who would make the next chance though, responding to the early substitute well, with JCH bursting down the right flank before drilling a low cross towards the far post. Leahy stood waiting, but his shot was saved well by the 'keeper from close range.

Moments later, Sercombe drifted another cross into the area, with JCh this time looking to get on the end of it, but seeing the ball got narrowly past his forehead.

However, it was MK Dons who broke the deadlock just past the quarter-hour mark, as Healey sharply turned between two Rovers men in the box and drilled a left-footed shot past van Stappershoef, into the bottom right.

Five minutes after the goal, Rovers generated another chance of their own, as this game seemed to swing back and forth. Menayese poked a ball through looking for a runner in his ranks and found Nichols, who looked to hit the shot first time on his right. He spooned his strike upwards though, seeing it clear the bar.

The game went somewhat quiet for a period after Nichols' chance, with both sides perhaps reeling from the frantic early stages.

When a chance did finally arrive, with 10 minutes to go in the half, it was speculative, with Kasumu aiming to loop Van Stappershoef from just outside the area. It caused a gasp from the fans, but the Gas' 'keeper watched it over the bar.

It was Rovers' go at the other end moments later, as a whipped free-kick from Sercombe found the head of Rodman, but he was towards the edge of the box, and the header found the gloves of Nicholls in the Dons net.

Nichols harried the MK Dons well to create an opening seemingly out of nothing with five to go, as he stole the ball and faced up his man. He spotted the run of JCH and dinked a delightful ball towards his strike partner, but Clarke-Harris couldn't get his header on target. 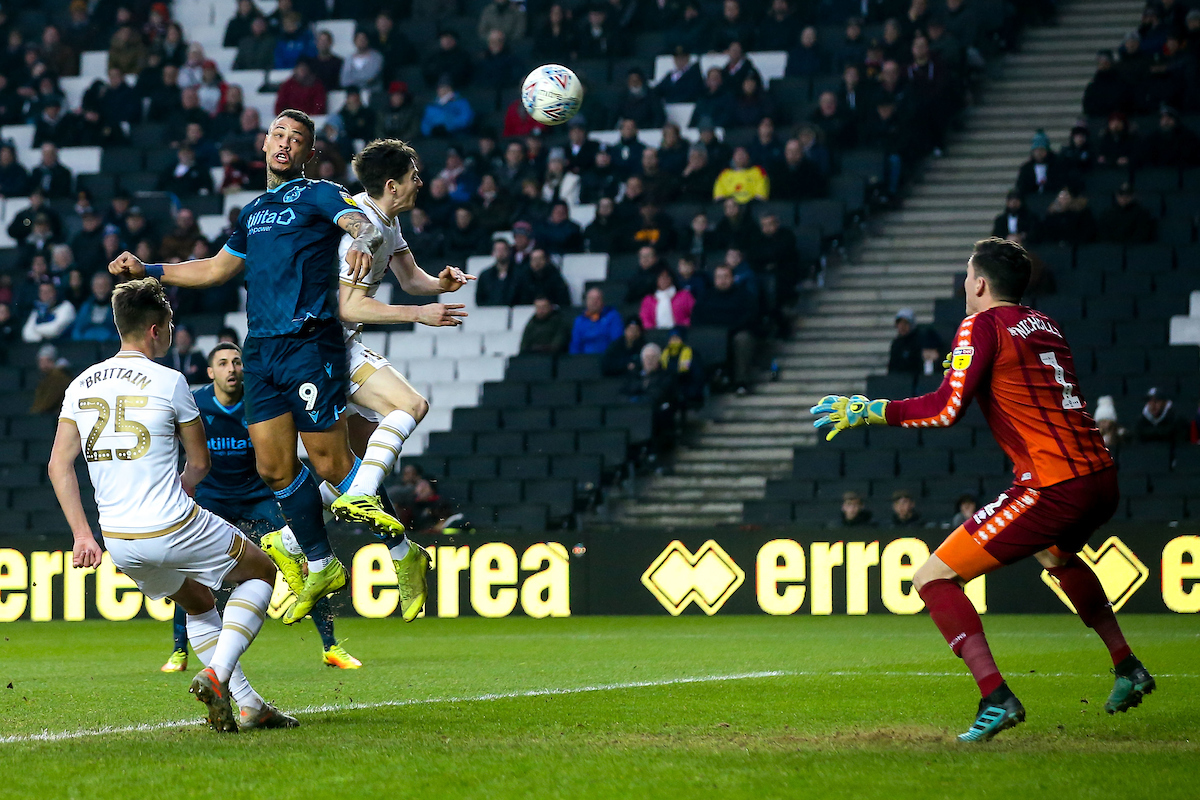 It took two goalline interventions to keep the deficit at one, as MK Dons worked their way into the Rovers box from the byline before squaring it back across. A first shot was excellently blocked by Menayese, before Luke Leahy hoofed the ball clear from under the bar as a second strike deflected towards him.

This was the last piece of action, in a first half that started as a spicy affair but fizzled out somewhat as the break approached.

Sercombe produced the Gas' first strike of the half, chesting down a looped ball before smacking a strike towards goal, only to see it blocked by the first man in white.

Just before the hour mark, the home side had their second, as the ball ricochetted off Craig and Kilgour, before falling to Sam Nombe. He prodded it towards goal and smashed it at Jordi van Stappershoef. The ball trickled under the 'keeper, and Nombe reacted quickest to prod it home from close range.

Minutes later, Leahy drifted a delightful ball towards the far post, but as JCH got his head to it, the ref' blew his whistle for a foul committed by the striker.

Substitute Ben Reeves shaped up to cross from a wide free-kick but instead curling a left-footed effort towards the goal, it took a vital touch from the retreating van Stappershoef to tip it over the bar.

A direct free-kick from the Gas created a real opening for Sercombe, as JCH's knock-down was then cleverly flicked on by Nichols. Sercombe hit it first-time on the half-volley but struck way over the bar from the edge of the area.

Leahy cleared off the line for the second time in the game, as Kasumu got on the end of a pull-back by Healey, targetting the right-hand corner. The cross back to Kasumu had left van Stappershoef stranded, but Leahy recovered well to clear. 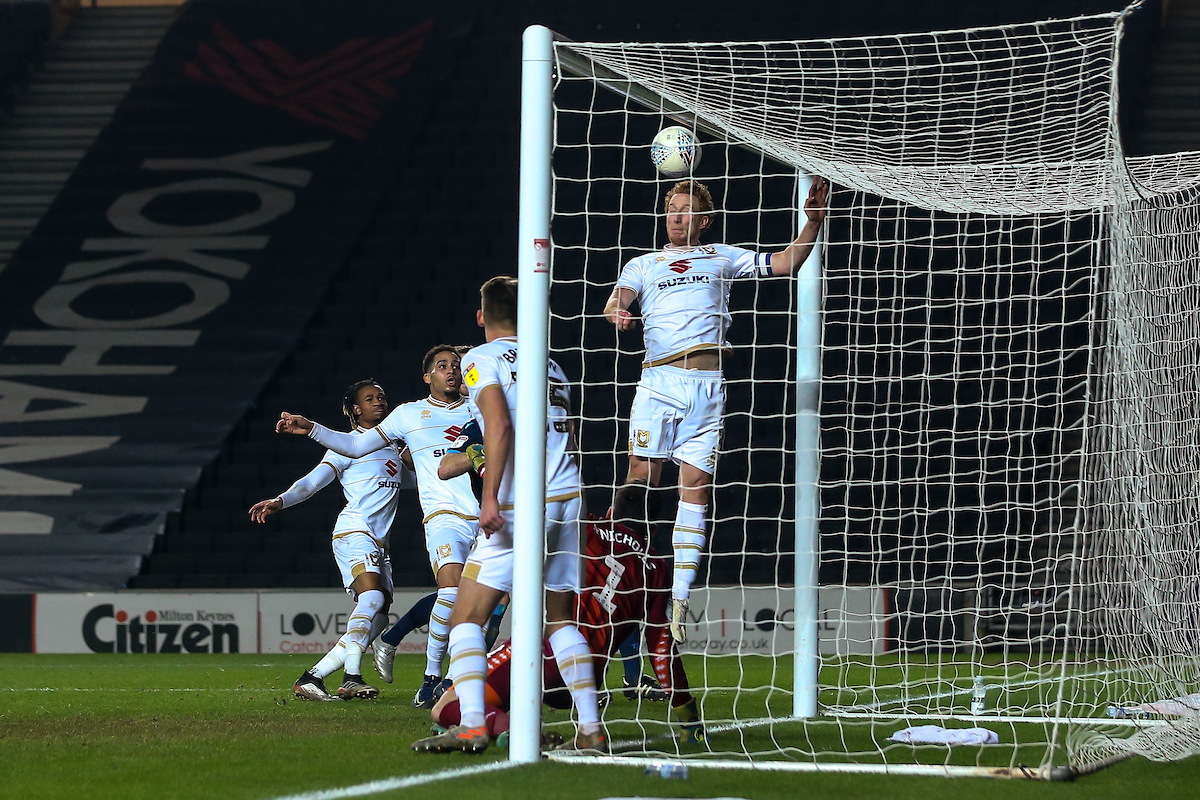 Leahy then contributed towards a chance at the other end, whipping a corner towards the front post which was flicked goalwards by JCH. It took a last-ditch flick from an MK Dons defender to keep it out.

Late on, MK Dons secured victory with a pinpoint through ball to Kieran Agard who calmly prodded past van Stappershoef in the one-on-one and sealed victory for his side.

The Gas now face Coventry in the FA Cup 3rd round on the coming Sunday!