A replay is needed to separate Rovers and Coventry after an action-packed 2-2 draw.

Rovers and Coventry City will have to do it all again in their battle to claim a place in the Emirates FA Cup fourth round, as the pair drew 2-2 in an entertaining game at The Mem.

Jonson Clarke-Harris, playing against his former club, opened the scoring from the penalty spot on six minutes, only to see Liam Walsh equalise midway through the first period.

Coventry City’s away kit features a black-and-white checked pattern to acknowledge the influence of two-tone music on the city. Rovers only have one Tone, but he did make two telling contributions to this game.

First, Tony Craig scored a superb headed to put Rovers back in front, just seconds after Coventry’s equaliser. Then, early in the second half, Craig was unfortunate enough to slam the ball into his own net, after Walsh’s chipped effort looked dangerous. 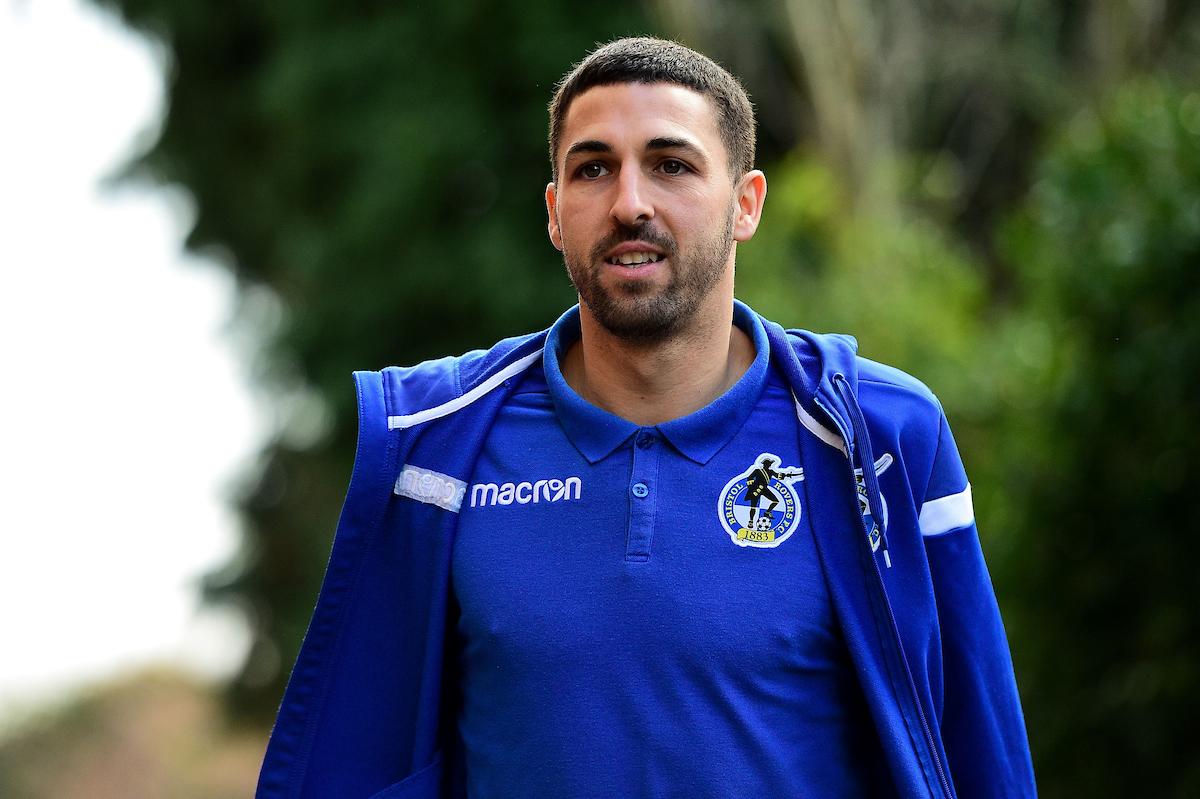 Zain Westbrooke might well have put Coventry ahead in the first minute, as City released him through the middle, but his attempt, which in fairness demanded a tough skill in volleying the ball over Jordi van Stappershoef, fell just short.

Just before the five minute mark, Coventry took a goal-kick short, and attempted to play the ball through the Rovers press. The men in blue and white offered no quarter, though, and gradually the pressure built. Eventually, Kyle McFadzean dithered for a millisecond too long, and was dispossessed by Cam Hargreaves. All McFadzean could do was haul Hargreaves over, and referee Gavin ward immediately awarded the penalty.

A point to the spot then a point to prove. Around 340 days prior to this game, Coventry City decided Jonson Clarke-Harris was no longer required, and allowed him to move to Bristol Rovers, on deadline day. In front of over 1,000 suddenly silenced Sky Blues, Clarke-Harris scored for the 23rd time since becoming a Pirate, stroking home the spot-kick with supreme confidence. 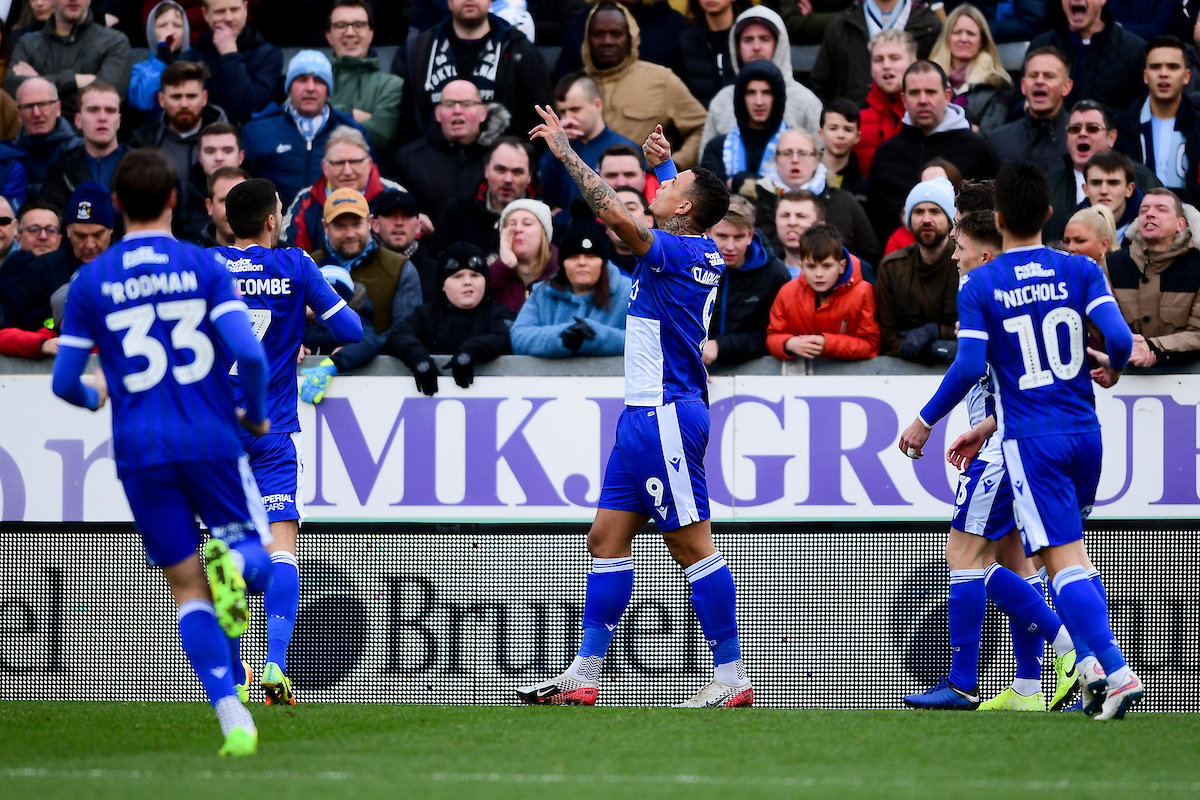 The early Rovers goal disguised a strong Coventry start. The visitors played with confidence and freedom in the opening exchanges, and on more than occasion delivered balls into the area which tested Rovers’ back three. Typically, Messrs Craig, Kilgour or Menayese blocked or headed to prevent further danger. On one notable occasion, it took a Menayese stretch to block a shot from Matt Godden, and then a van Stappershoef save to prevent Jordan Shipley scoring an equaliser.

When the leveller did come, on the half hour mark, it was difficult to begrudge City it. The lively Liam Walsh picked up a ball that was too hot for Ed Upson to handle, and lashed a low 20-yarder that flew into the bottom corner of the net. Van Stappershoef may have been slightly unsighted, and possibly thrown by a slight deviation with a deflection off of Tony Craig. 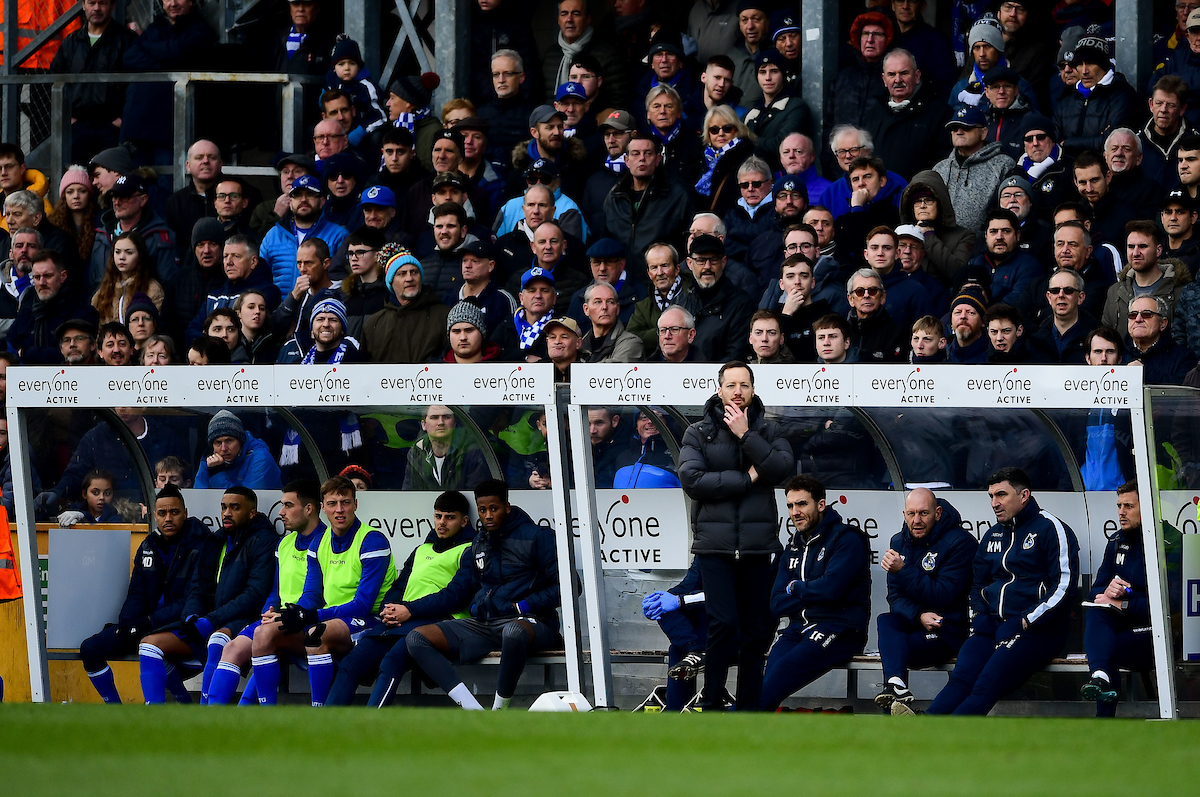 Craig’s next touch would be even more significant.

Rovers won a free-kick wide on the right flank, from which Sercombe sent in a ball just begging to be attacked. Needing no further invitation, Craig met the ball powerfully, and sent Rovers back in front, less than two minutes after their initial lead had been wiped out. 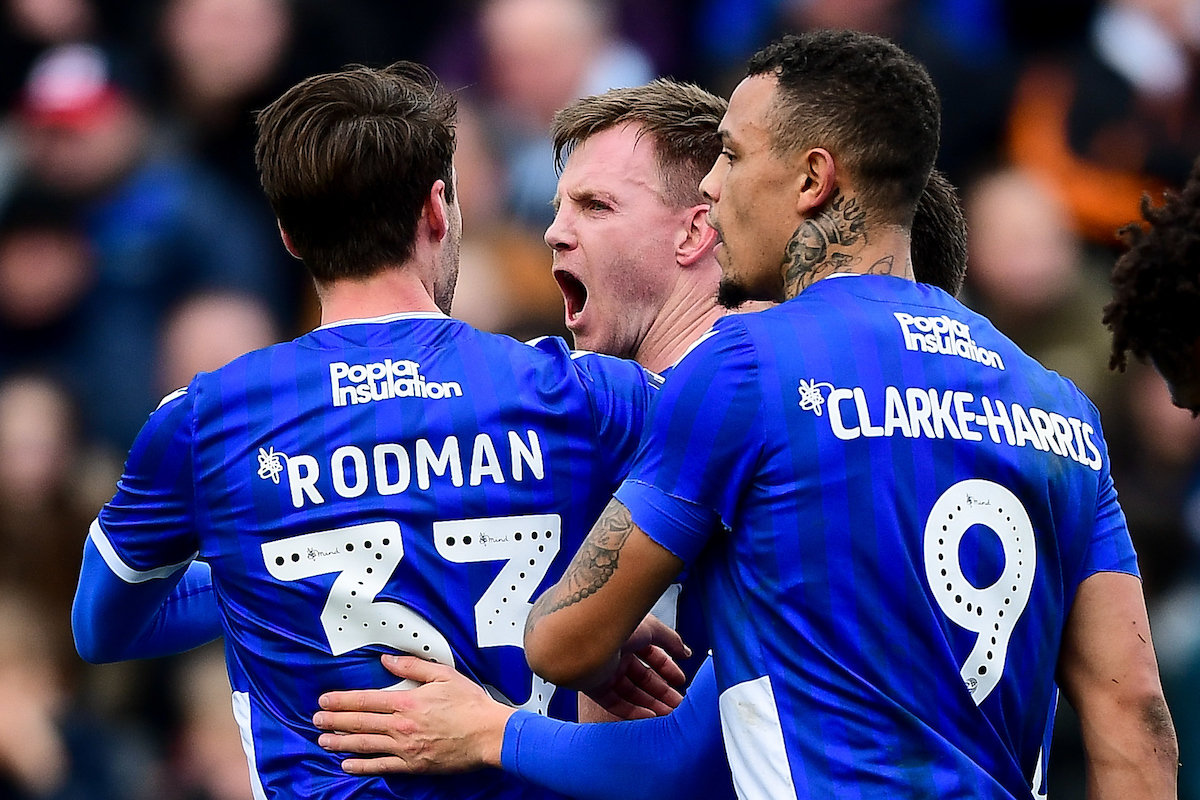 The conclusion to the half saw the game take on a motif of blood and thunder, if not thud and blunder. Things had been boiling under, but when Fankaty Dabo and Clarke-Harris came together, the referee had to intervene. In truth, both players made a tackle that looked not like they were trying to hurt the other, but tackling as though they anticipated their opponent would hurt them. Dabo came off the worse, and Clarke-Harris was cautioned.

Moments later, Dabo pulled back Luke Leahy off the ball, which was seen by many but not the referee. He stopped the play, presumably on his assistant’s advice, but no cards followed. Rovers clipped the ball down the left flank, where Clarke-Harris again looked to hold off Dabo. JCH went down, in all truth barely touched, but this time the referee did book Dabo.

To further the comedy, two Liams collided when Walsh slammed late into Sercombe, but the referee had – rightly – spotted a foul by Hargreaves a beat earlier. Walsh’s tackle escaped censure, leaving us to pose today’s semi-rhetorical question: can a referee give a free-kick one way, but book a player of the sinned-against side? Answers on a postcard (as if such a thing still exists).

With the last chance of the half, Coventry worked a corner along the deck to their captain, Liam Kelly, who failed to take advantage of the freedom he was given, blasting high into the Thatchers End, as the half-time whistle sounded. 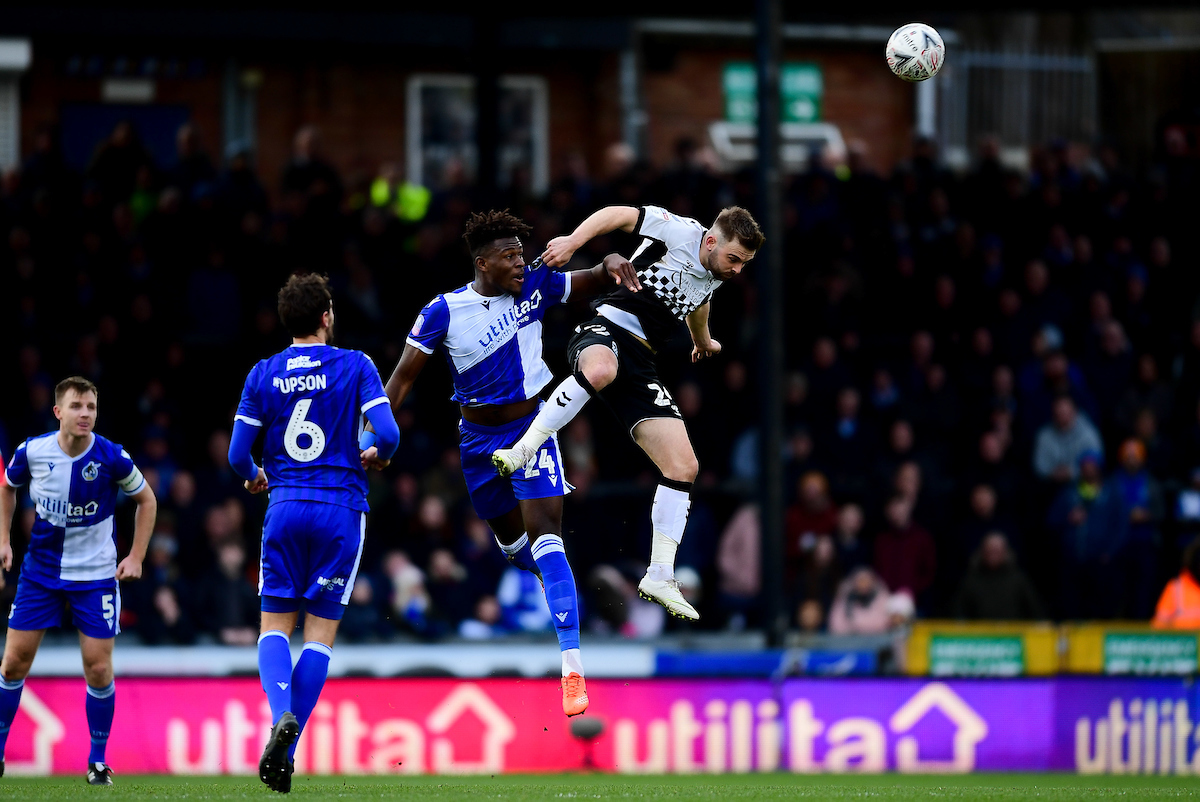 City began the second period as brightly as they had the first, with Shipley and Godden again linking up, with the latter’s blast at goal fortunately being straight at Van Stappershoef.

Rovers soon won a free-kick by the corner flag on the right, and although Cov dealt with the first cross. The ball dropped towards Ed Upson, on the edge of the area, wide on the right. He could not have caught the ball any better, and he fact that the ball struck the outside rather than the inside of the post is one of the great injustices of 2020 so far.

Well, that’s pushing it. But good grief it would have been one of the finest goals ever seen at The Mem. Obviously, to spoil the moment, Coventry broke away and scored.

A sweeping move down the middle saw Godden tee up Walsh, who chipped over Van Stappershoef. The ball may have fallen to Godden, hovering, it may have gone wide, it may have gone in. Tony Craig could not take any chances, but his swiped clearance smashed into the roof of the net, and Coventry had parity once more.

City substitute Callum O’Hare went narrowly wide and Godden slammed over from a tricky angle as the visitors found renewed energy. Rovers responded by bringing on Kyle Bennett for Nichols, before a second city substitute, Jamie Allen, picked up on a loose ball, but lashed over. 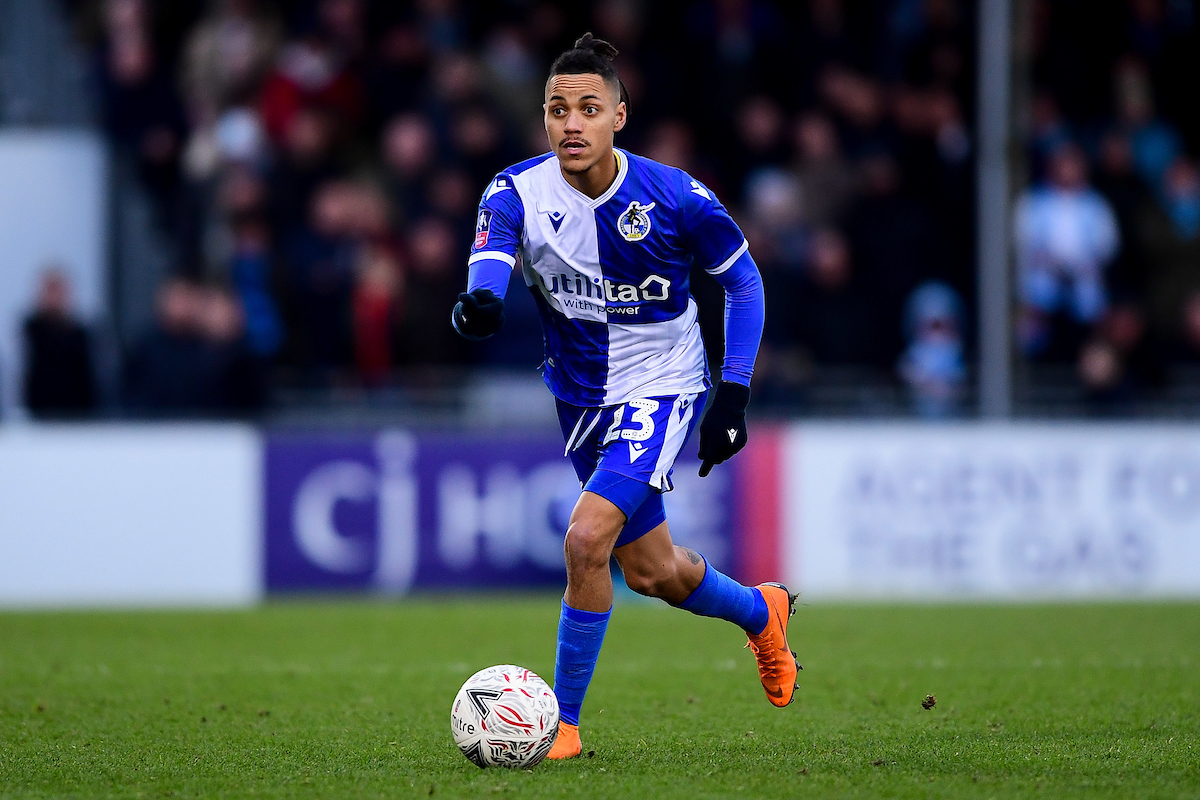 Rovers were not without chances, and possession. Indeed, the chance that fell to Hargreaves, came as a surprise only to Cam, who timed a run into the box well, but made little connection, possibly anticipating a defender’s intervention.

Indeed, Rovers, as the game entered its final ten minutes, started to stay on. From a Clarke-Harris flick on Leahy looked to be in, then second best, then won the ball back, before chipping a stranded goalkeeper, only to see the ball drift over the bar.

Curiously, both sides subbed their left-sided wing-backs with six minutes to go, with a welcome return to action for Tareiq Holmes-Dennis for The Gas.

Coventry looked set to win it late on, as Godden raced through, but Van Stappershoef made an intervention the injured Anssi Jaakkola would have been proud of, spreading his body to make a save when a goal looked odds-on. 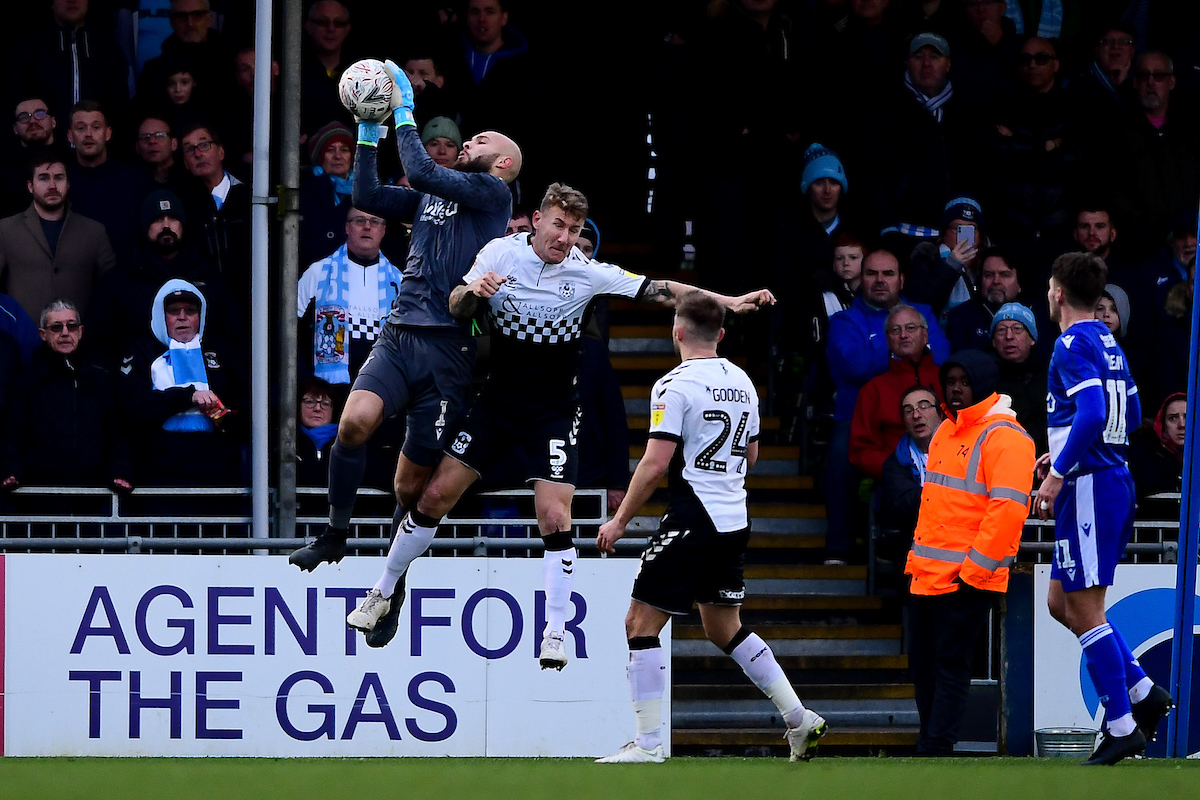 In injury time, a Gas corner, floated to the far post, found Craig. Would it be three-Tone? Not quite, as his header looped over and onto the roof of the net.

Is it Madness to think we could go to Coventry and win our way into the next round? Now that would be Special. 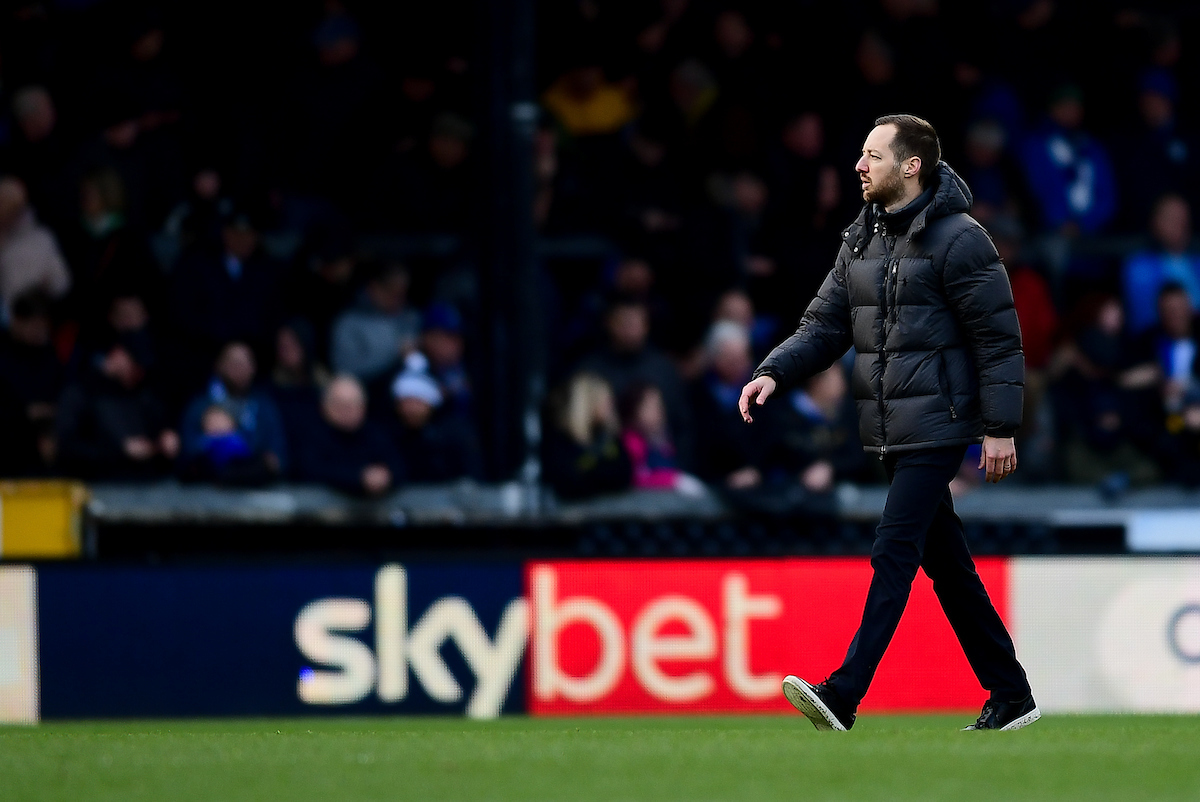 The Gas now look forward to more cup action as they face Stevenage on Wednesday in the Leasing.Com trophy.