The Gas go down to three second-half goals away from home...

A red card shown to Abu Ogogo changed the game as the Gas looked to be in the position to grind out something at the Stadium of Light with an hour gone.

With Rovers down ten men, the task became even more difficult, and Sunderland made their pressure pay, firstly through Gooch, before Wyke slotted home under contentious circumstances.

With less than ten to go, a fortunate deflection saw Luke O'Nien's effort wrongfoot Blackman and find the corner of the goal to make it three. 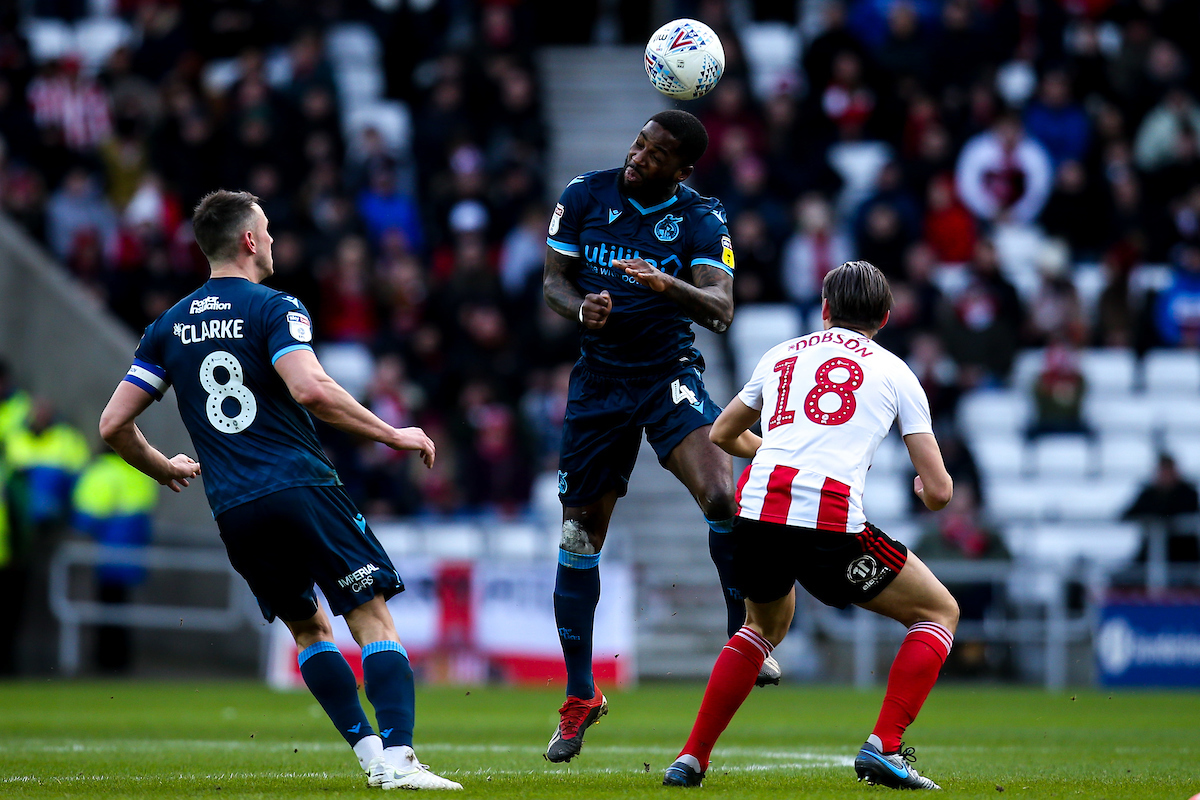 Garner elected to tinker with the winning combination that played and beat Blackpool this time last week, with Rollin Menayese and Josh Ginnelly coming in for Mark Little and Alex Rodman.

On the bench, both Cian Harries and James Daly featured, as the pair prepare to both make their Rovers debuts. 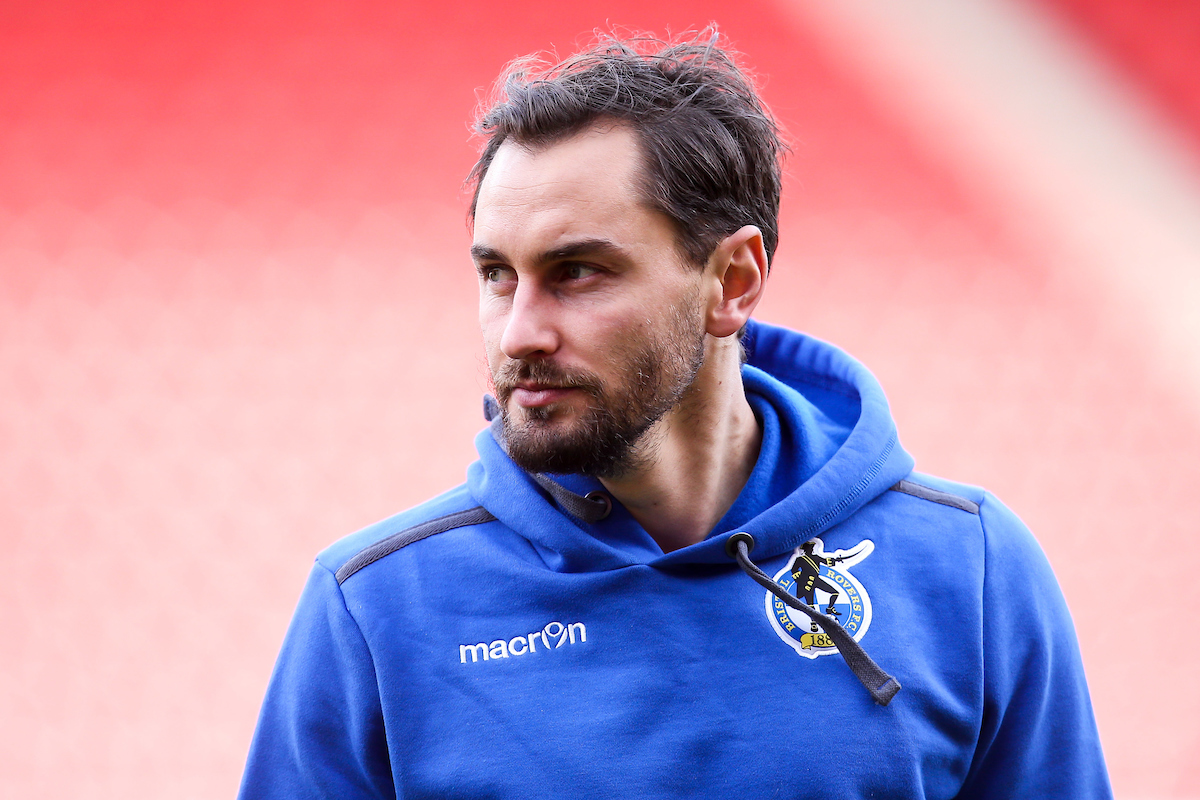 On his 50th appearance for the Gas JCH almost made an instant impact as he latched onto a whipped ball from deep. He strained himself to head the ball and saw it nestle comfortably in the 'keeper's gloves in the center of the goal.

Not long after Chris Maguire wriggled into space outside the box not long after, attempting to split the two Rovers defenders with a strike, he managed to but smashed his shot over Blackman's net. 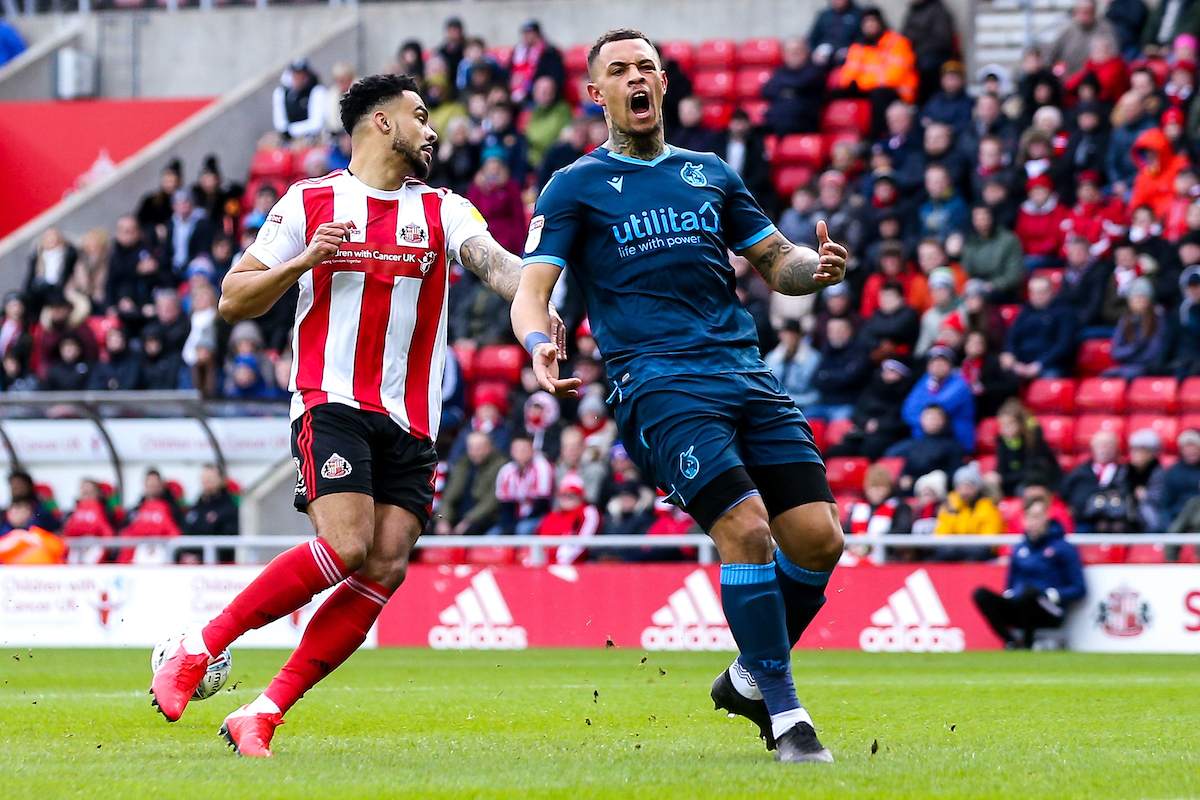 Almost from the restart, Maguire found himself taking a free-kick in a dangerous area after Luke Leahy hacked down a striker. He chose to strike under the wall, but Blackman was alert to it and caught well.

Menayese was needed as the 10th minute rolled around, as he calmly slid in to remove the ball from Denver Hume's path just as the wide man looked to latch onto a through ball.

As Sunderland continued to press, it was Luke Leahy who was next called into action, crucially taking a threatening low ball across the six-yard box away from the winger looming at the far post, knocking the ball out for a corner.

The pressure just didn't seem to stop from the home side, as Charlie Wyke reacted well to meet a deflected cross at the near post. He attempting to flick it back across goal with his foot, but the effort went just over the bar from the sharp angle.

After Kilgour's heroics at the top end of the pitch against Blackpool last week, the young center back was a hero in his own goalmouth this week. With the goal gaping for an onrushing Sunderland striker, Kilgour reacted superbly from close range, before Luke Leahy go across to then stop the follow-up. The Gas had survived a testing 20 minutes at the Stadium of Light.

With the tide stemmed, at least for the meanwhile, the Gas began to exert their own pressure, with Ogogo seeing a half-chance from the edge of the area blocked away by an outstretched Sunderland leg. 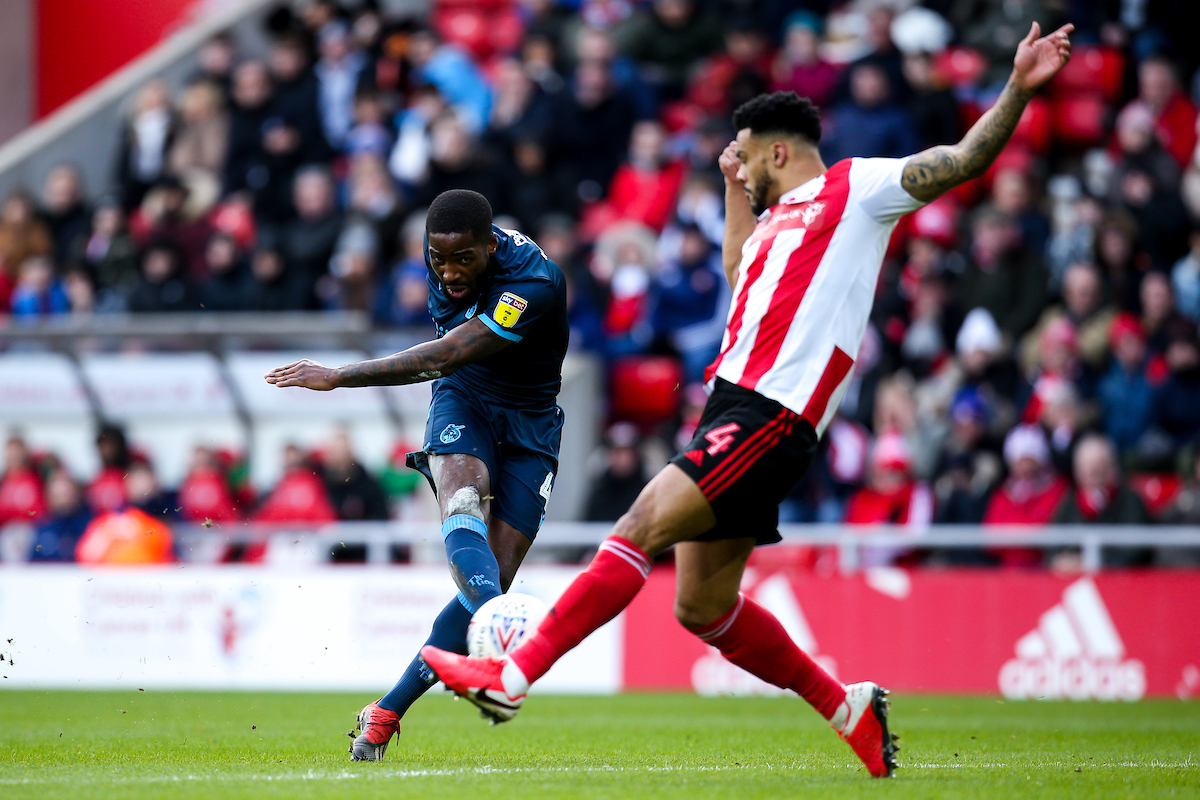 With a matter of minutes to go in the first period, the Sunderland fans appealed heavily as Mitchell-Lawson went to ground in the box, sliding in to take the ball away from Luke O'Nien, the referee blew his whistle, but only to award a corner as it ricocheted off the home player and over the byline.

There would be time for one more chance in the half, as O'Nien was once again involved, arriving late to cannon a header towards goal, beating Leahy to the cross. He directed plenty of power onto the effort, but Blackman thankfully watched it over his bar. Leahy went down following the chance, with O'Nien seeming to have clattered into the left-back, but he was deemed okay to play on after receiving treatment before both sides went in for half time. 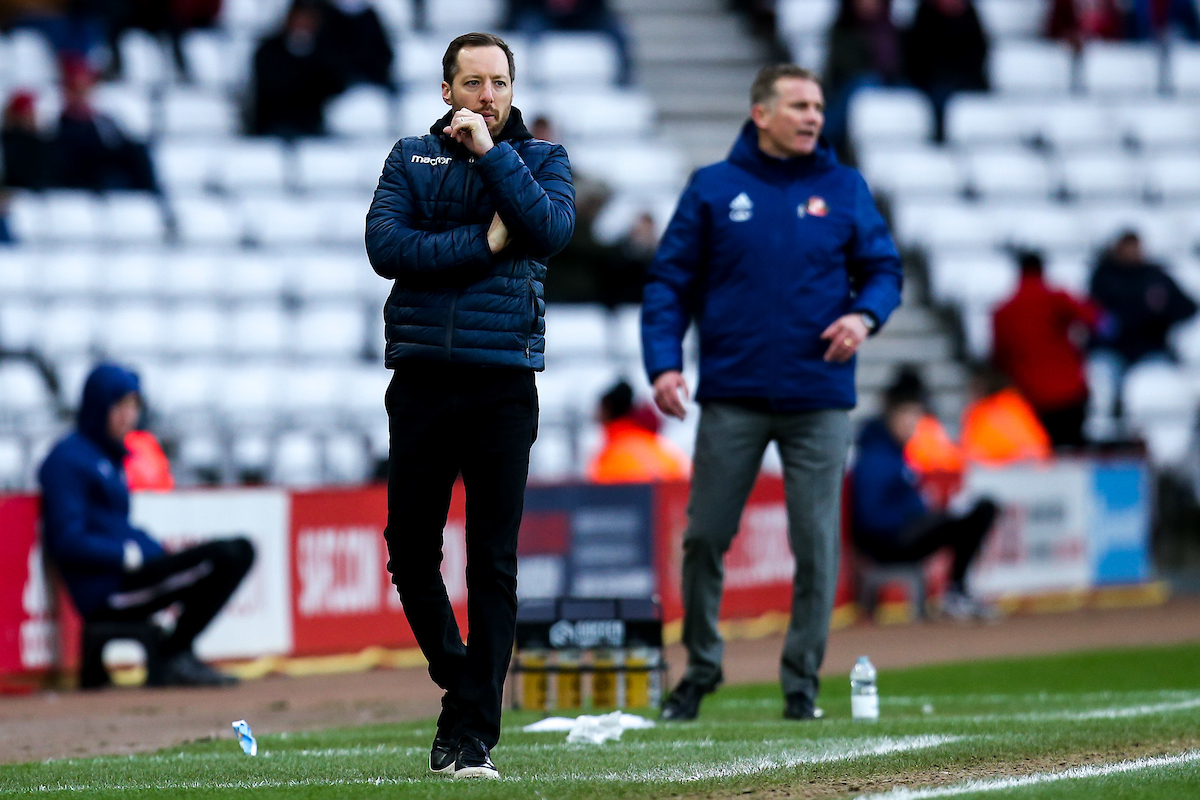 When the teams re-emerged, the game picked up where it left off, with the Gas holding firm from Sunderland pressure, a late challenge from Tony Craig the only real highlight of the opening 10 minutes, resulting in the defender receiving a yellow card.

Five minutes later, the Gas saw a different colour card brandished, as Ogogo collided with Maguire off the ball. The ref', without hesitation, paused play and showed a red card to the Rovers midfielder, leaving Rovers with 10 men for the last half an hour.

Following this, Garner chose to switch things up with the use of the subs bench, as Mitchell-Lawson made way for Alex Rodman.

As the 70th-minute approached a last-ditch block from Alfie Kilgour was needed to deny Sunderland the lead, as a free-kick came in from the right and bobbled around the Gas' area. The ball was eventually struck goalwards but a strong Kilgour foot was enough to block it away. 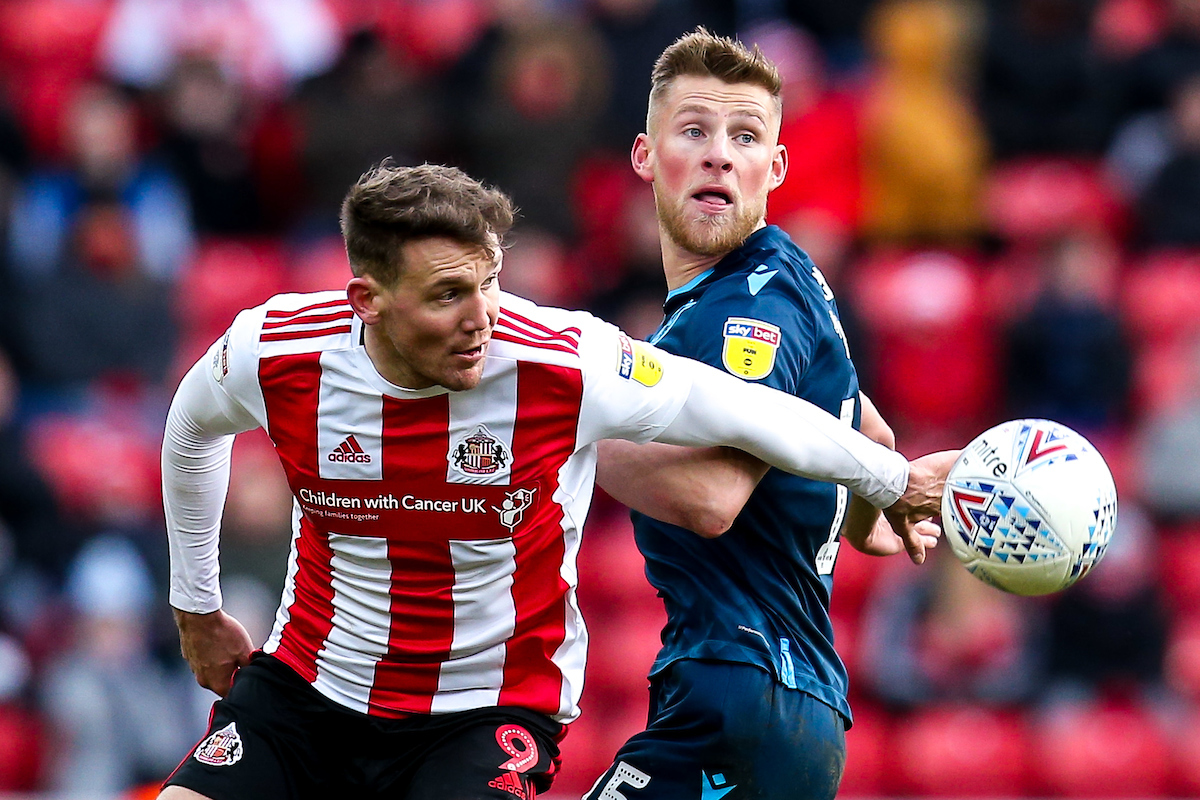 However, the home side would break the deadlock not long after, as Lynden Gooch was slipped in from the right side to stroke into Blackman's net from close range, Sunderland's pressure finally paying off.

Moments later, Sunderland had their second as Alfie Kilgour and Tony Craig collided, the ball bounced through to Wyke who rounded Blackman before slotting calmly into the empty net. A knockout blow struck while Kilgour and Craig were laid out on the deck. In the aftermath, Garner received a yellow for his protests of the circumstances surrounding the goal, with his two center-backs suffering a head injury.

With eight minutes of normal time remaining, the home side had a third, as Luke O'Nien jinked inside before seeing his shot deflect kindly, wrongfooting Blackman and nestling in the Rovers net. 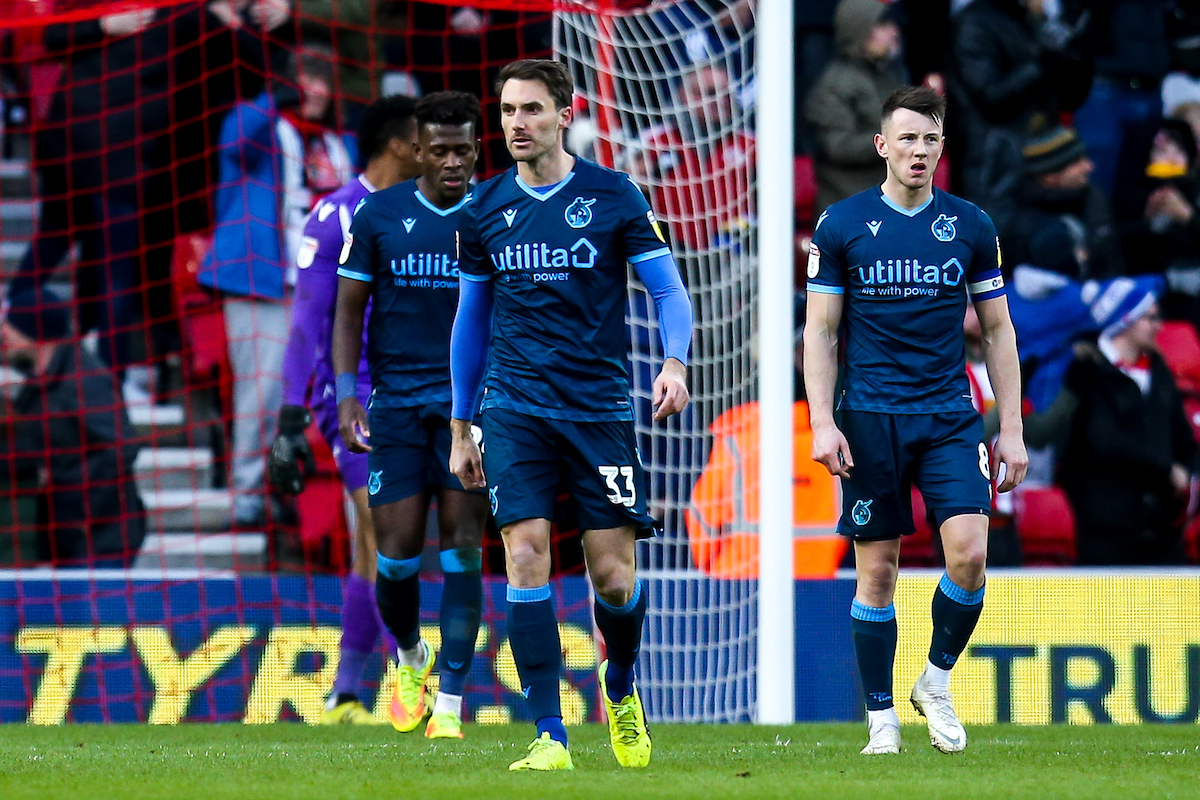 JCH looked to claw one back late on, lashing a first-time volley over the frame of the goal as he received the ball from the left flank.

In added time, O'Nien received a pull back from the byline but lashed his strike over the bar from close in - seeing the score remain at 3-0 as the full-time whistle went.

The Gas will host Shrewsbury Town at the Mem next week, looking to bounce back from today.