The majority of the Rovers squad enjoyed 70 minutes of match action - as Rovers were narrowly beaten by Championship outfit, Cardiff City, in a 140-minute pre-season encounter.

Aden Flint headed the Welsh side in front during the second 70-minute half, before a deflected effort from Lucas Tomlinson allowed Rovers to pull back level in what was a beneficial pre-season fixture for Ben Garner's side.

A rebound goal inside the final 15 minutes from Robert Glatzel saw the visitors take the victory, but Rovers would have been pleased with the amount of competitive minutes that was spread throughout the squad.

The Friday night fixture at the Mem was split into four periods of 35 minutes, in order to allow the majority of the squad to fulfil seventy minutes worth of match time.

For the first two periods, Rovers opted to go with an eleven that had Jaakkola in goal, Baldwin, Ehmer and Kelly in defence, with Luke Leahy and Mark Little tasked with adding width from wing-back roles. Zain Westbrooke and Josh Grant were paired in the middle of the pitch, while Cam Hargreaves and Sam Nicholson and Jayden Mitchell-Lawson all operating in advanced attacking positions. 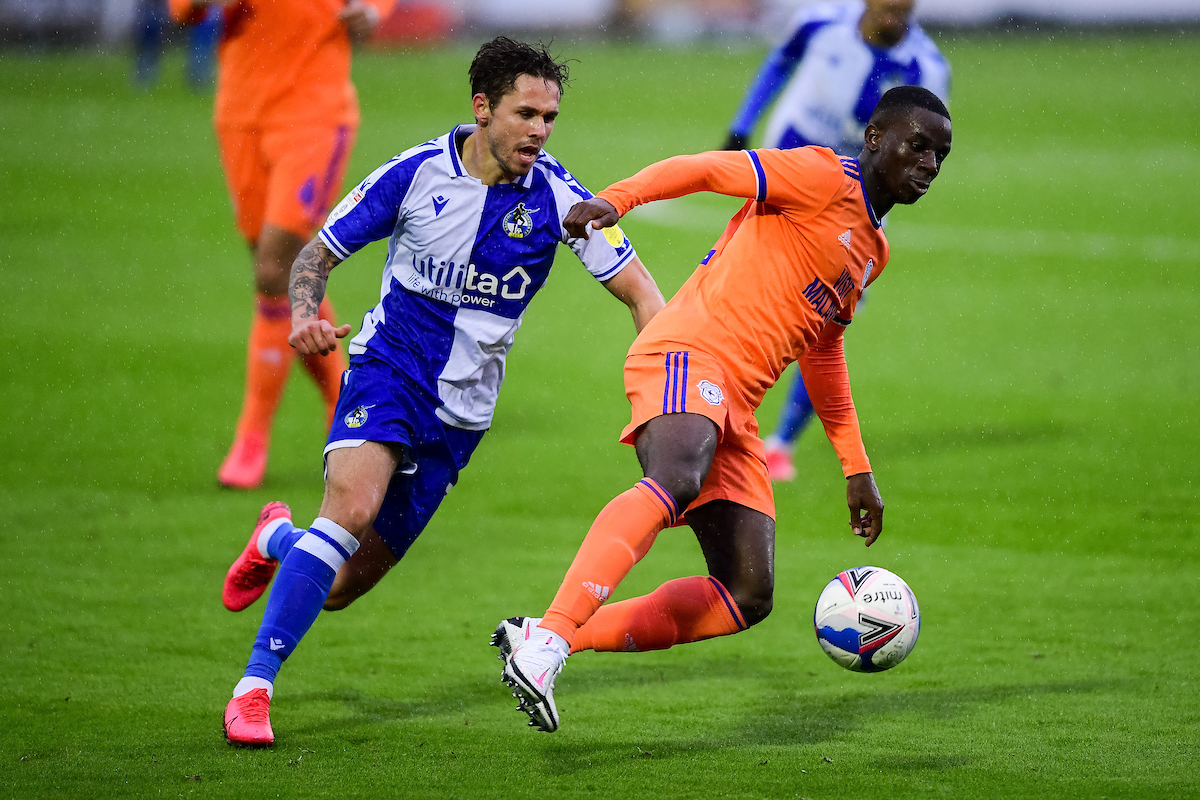 The game took on a lively tempo from the off, as both sides looked to explore attacking outlets early.

An early corner for the visitors pinballed around the Rovers area and looped kindly for Kieffer Moore to head towards goal. With Jaakkola out of position, the header looked destined to settle into the far corner, but an intelligent goalline clearance from Josh Grant edged the ball to safety.

Rovers enjoyed moving play down the left, with the duo of Leahy and Nicholson looking like a fruitful partnership for Rovers' attacking play. The pair combined to create Rovers' first real chance of the contest, as Leahy cushioned a long-ball forward into the path of Nicholson with a delightful first touch, with the winger taking the opportunity of space to launch a long-range effort on goal that swung high of the target.

Ben Garner's side had a strong appeal for a penalty dismissed when Cam Hargreaves burst down the right and managed to pick out the run of Jayden Mitchell-Lawson inside the area. It appeared the winger had managed to burst across to get a touch before being tripped by a Cardiff defender, but the referee was quick to usher play to continue.

Moments later, a set-piece in a handy position had a cohort of Rovers players interested in striking an opportunity at goal. Zain Westbrooke took claim of the free-kick and fired a side-footed attempt that held power, but lacked the direction, with the opportunity skipping past the upright.

After the games first break at 35 minutes, Rovers continued to have the favourable share of possession and looked bright when moving forward.

Some bright link-up play from Mitchell-Lawson saw the winger drift infield and pick out a handy pass to find Cam Hargreaves, who couldn't quite dig out a shot while under pressure from a handful of defenders.

There were moments when the Rovers defence had to be alert and a well-timed sliding challenge from Luke Leahy proved to be just enough to deflect clear an effort from Kieffer Moore, after the towering target man managed to work a degree of space inside the Rovers area.

As the prolonged first-half drew to a close, an extended phase of build-up play for Rovers led to a hurried clearance from the visitors falling kindly to Zain Westbrooke. The summer signing connected sweetly with a first-time volley that required attention from Day in the Cardiff goal, who was on hand to push the attempt clear.

There were late chances for both sides to register a goal before half-time. The first fell to Rovers, as Mark Little darted into the Cardiff area to meet a through-ball from Mitchell-Lawson, with the right-back seeing his effort saved at the near post by Joe Day. At the other end, it was the lively Moore who managed to find the target with a well-struck effort from inside the Rovers area that Jaakkola was equal to.

At the interval, Rovers made changes to the entire eleven, with a youthful feel to the side for the second half.

Rovers started strongly after the break, with Jonah Ayunga quick to get an early effort on goal, hitting a right-footed shot from the edge of the area that was collected at the second attempt by Etheridge in the Cardiff goal.

There was a good intensity to the second half, as both sides looked to press forward and register opportunities.

Josh Hare looked to take everyone by surprise with a shot from deep after the right-back managed to intercept play down the Cardiff left. The effort from Hare possessed a good amount of pace and just darted across goal and wide of the target.

That chance from Hare spelt a spell of Rovers chances. A slack pass from the visitors was picked up inside the Rovers half by Tom Mehew, who had the vision to set Jonah Ayunga through one-on-one with Etheridge. The forward was forced to drift out to left and with the angle closing on goal, the striker dragged his left-footed attempt wide.

The visitors took the lead in the encounter in the 88th minute, against the backdrop of a number of sizeable Cardiff chances. The goal came via a corner, as Aden Flint was able to leave his marker to plant home a header that beat van Stappershoef for pace.

Rovers had an instant chance to respond, as Josh Hare took control of a set-piece that was situated in a central position. The defender had good direction on his set-piece, but perhaps lacked the pace needed to force Etheridge into a more challenging stop.

Just as the final quarter break approached, Rovers did manage to get back on level terms. The equaliser came from smart play from Lucas Tomlinson, who took aim from goal from 25-yards out saw his effort take a slight deflection to see if nestles into the bottom, beyond the outstretched arm of Etheridge. 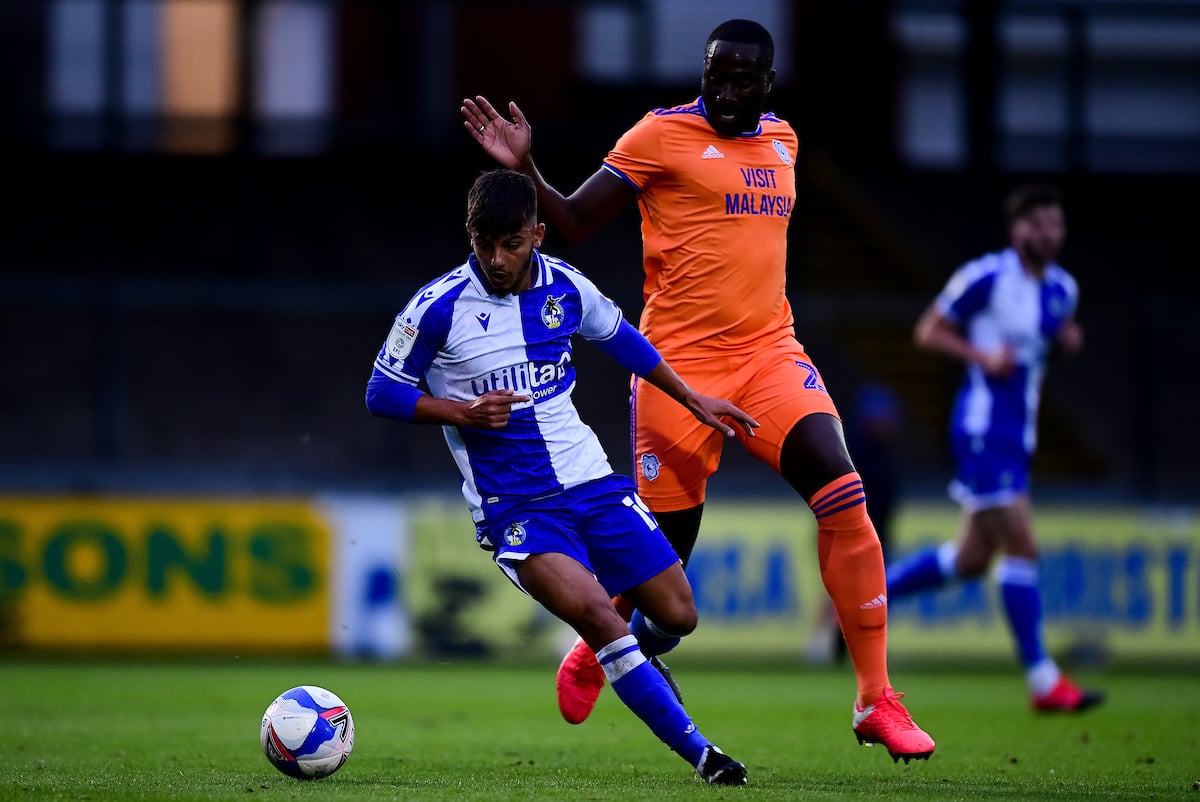 Inside the final 35 minutes of the encounter, Rovers registered a number of chances to grab a winning goal.

Ed Upson forced Etheridge into making a stop from a volley from the edge of the area, as Jonah Ayunga also tested the Cardiff 'keeper with a forceful effort after the striker was able to direct a deflected shot towards goal.

It was Cardiff who grabbed a goal inside the last 15 minutes to give Neil Harris' side the win. The opening game as an effort from Bacuna curled towards goal and required van Stappershoef to push the effort clear, but the save fell to the feet of Glatzel who made no mistake in firing home from close-range.

Rovers did mount a late opportunity to draw level, as a low Josh Hare cross picked out Ayunga, who managed to get a touch to deflect the ball towards goal, only for his effort to be cleared off the line by Sol Bamba.

The game ended with the visitors taking a narrow win. Rovers face a trip to Ipswich Town in the Carabao Cup next Saturday.