Bristol Rovers Women’s are today, celebrating their first birthday since the club was re-launched.

Despite the disappointment of having their season declared null & void after securing a 100% record and only one win from sealing the Gloucestershire County Women’s League title, The ‘Gas Girls’ have still made an extraordinary impact on and off the pitch during their inaugural season.

Since the official announcement was made in April 2019, the club received 109 registrations from women and girls in the local area to take part in ‘Open Sessions’, which then needed to be streamlined to form two squads for the 2019/20 season. Founded by Matthew Davies and Nathan Hallett-Young and Chaired by Adam Tutton, the team from Bristol Rovers Community Trust have noticed a significant increase in girls participating in free football sessions organised by the Trust and an increase in female applicants for their BTEC Education courses. The impact of Bristol Rovers Women’s is already starting to be seen across our community.

On the pitch, the ‘Gas Girls’ were on course to secure the Gloucestershire County Women’s League Division One after picking up 11 wins out of 11, scoring 45 goals and only conceding 6. Under the leadership of club captain Natalie Coles and the striking prowess of Georgia Vandries and Rossana Rocha, the girls also reached the semi-final of the League Cup, before the competition was postponed due to the Coronavirus outbreak. The Development Team have also enjoyed great success, topping Division Two and reaching the semi-final of the GFA County Cup. Despite the disappointment of both Leagues coming to an abrupt end, the staff and the squad are already focused on improving for next season with the inclusion of more qualified staff, volunteering their time to help us lay the foundations to progress in the future.

Chairman and Community Trust CEO, Adam Tutton, said; “I am absolutely delighted with the progress that Bristol Rovers Women’s have achieved this season. Had the current pandemic not brought a premature end to the season I am sure we would have seen both teams winners of their respective leagues. With both teams also doing well in the cup competitions I am sure the ‘Gas Girls’ would have been bringing plenty of silverware home to Lockleaze. I would also like to thank all the management and coaches for their outstanding support and professionalism throughout the season and I am greatly looking forward to the 20/21 season.”

Bristol Rovers Women’s play their home fixtures at Lockleaze Sports Centre, a £6m facility at the heart of community with the aim of engaging more young girls to participate and support women’s football. The Club have already noticed an emergence of younger fans attending home matches who have been offered the opportunity to meet players before matches on regular occasions. Fan engagement is at the heart of the women’s game and this is something that the ‘Gas Girls’ will continue to further establish.

First-Team Manager, Nathan Hallett-Young, said; “I have a massive sense of pride seeing where the club is today. So much effort had been put in behind the scenes to get to where we are now. A driving factor to the reforming of the club was to raise female participation within our community, we’ve exceeded massively with this and every target we have set, the future is really looking bright for us.”

Co-Founder and Secretary, Matthew Davies, added; “To see what was initially an idea on paper, come to fruition and evolve into the success that it’s becoming, makes me very proud. The time and effort that goes into this club by a group of committed volunteers is fantastic to be a part of and course, the girl’s have been a credit to Bristol Rovers. They are proud to represent this club and always give 100%. They are superb role models for any aspiring young girl who wants to play football. Our sponsors have been tremendous and the relationships that we are building will only help us to make more of an impact in our community.”

A free digital 1 st anniversary programme which includes many interviews with current staff & players, a season review and a feature on a visit to St. George’s Park, is now available to download by clicking on this link. 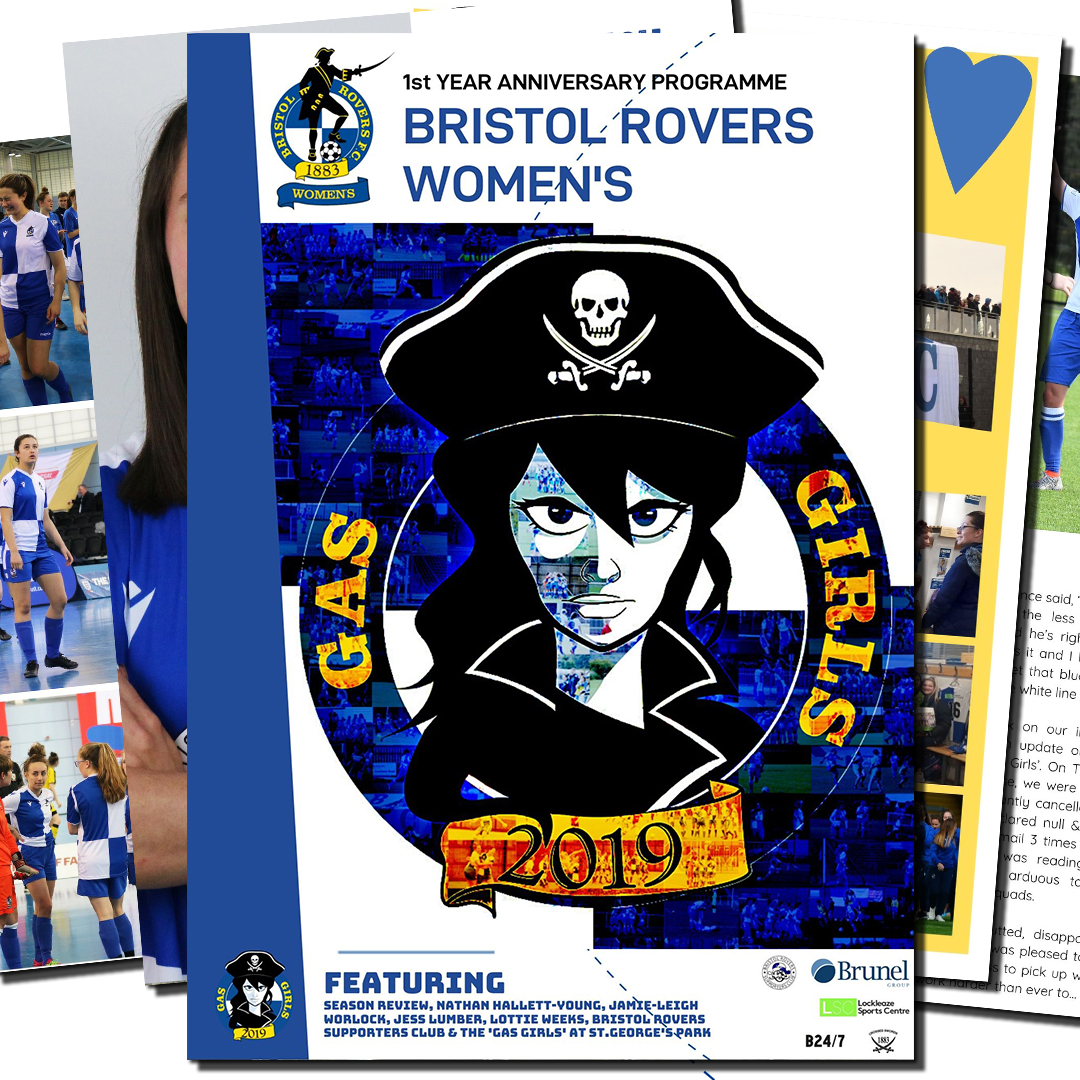