The Gas secure victory and maintain an unbeaten record in the league at the Mem...

For a third straight Saturday, Graham Coughlan’s Gas knuckled down to earn three points with a committed display, this time stretching the unbeaten league run to five games.

Of late, though, the three point hauls have been coming away from the Mem, with home fans settling for draws from winning positions. Not this time. A bolstered crowd lifted their noise as their belief grew, with Jonson Clarke-Harris’s winning goal sparking a strong second half display that propelled Rovers to a well-earned win.

Rotherham, in decent form of their own, named an entirely unchanged line-up, while Coughlan made a familiar tweak, bringing back Tyler Smith for Tom Nichols, up front.

A lively opening 20 minutes saw the visitors play some attractive football, and get forward into numerous good positions. They failed, though, to convert this into anything resembling a chance. Rovers, however, were looking a bit more potent.

A cross-field ball that found Jonson Clarke-Harris was worked to Alex Rodman, whose floated cross was attractive to a small posse of Rovers players attacking the far post area. It was Abu Ogogo who arrived first, looking to repeat the dose from the previous Saturday. Unfortunately, he headed over.

Shortly afterwards, Tyler Smith defied a height and weight disadvantage to (fairly) bully Clark Robertson off the ball and bear down on goal. He was unable, though, to fool Daniel Iverson, who stood up long enough to save Smith’s shot. 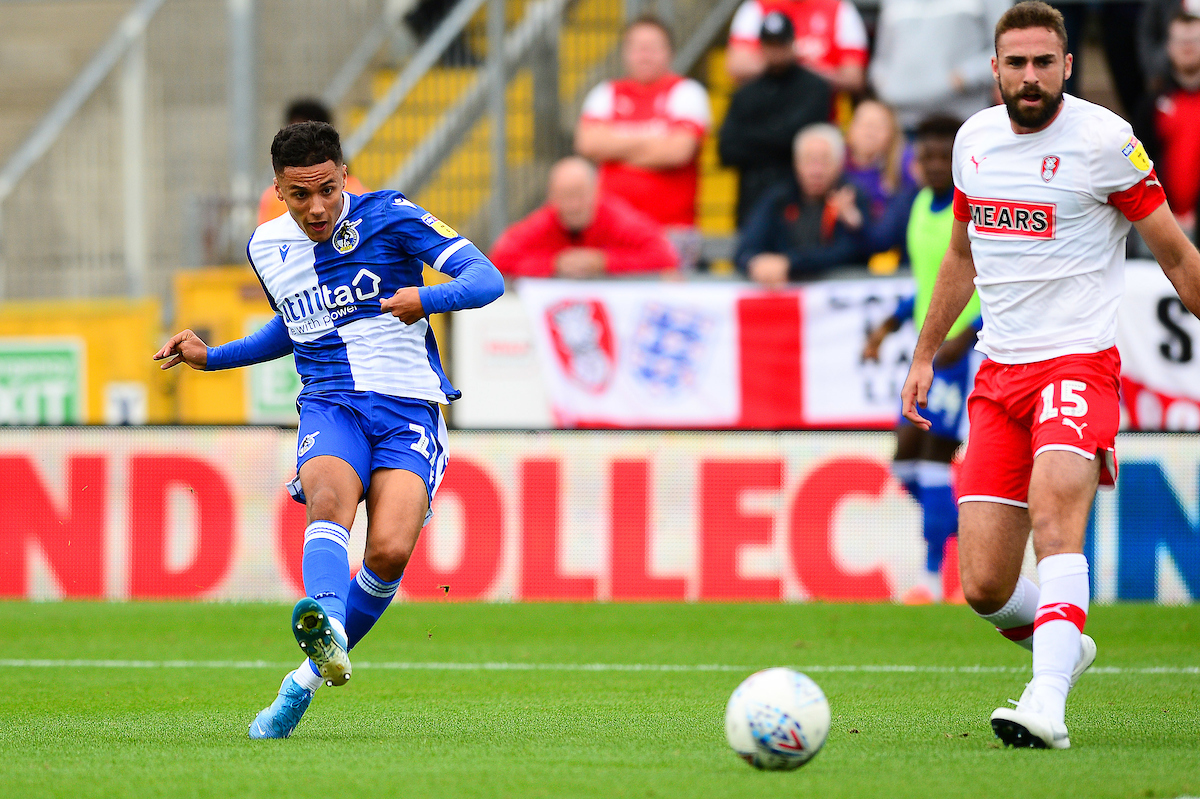 Rotherham’s best source of inspiration seemed to be coming down their right flank, with two crosses from right-back Billy Jones causing consternation. The first was caught by Anssi Jaakkola, but almost simultaneously the Finnish goalkeeper collided with Tony Craig. Jaakkola juggled, but retained, the ball.

From Jones’ next cross, he found potent striker Freddie Ladapo, who headed straight at Jaakkola, who gratefully pouched this time.

This was just past the half hour mark, and Rotherham were having a good spell. From a left wing corner Rovers cleared only as far as Jake Hastie on the edge of the area. A Hastie looping shot caused a Jaakkola retreat, but Anssi was equal, acrobatically tipping the ball over the bar.

Hastie was the danger man again in the last real chance of the first half, as he darted into the area so speedily that any Rovers challenge was in danger of giving away a spot kick. Hastie advanced then flicked low across the six-yard box, only to find none of his team-mates had kept up.

At the break, the Big Screen at the South end of the ground read more like favourable house survey than a football score. Gas 0, Rot 0. (Good news, what are the water rates like?) But soon into the second half, that changed. Emphatically.

Liam Sercombe was hurried and under pressure in the Rovers midfield, but thought quickly and improvised, sending a delightful ball over the Rotherham defence, but not too close to goalkeeper. Clarke-Harris reacted first, ran onto the ball, strongly fended off any attention, then thumped the ball low into the net with the precision and confidence of a beautifully in-form striker.

Rotherham took an age to get going after the break, and one felt Rovers needed to capitalise. Ogogo and Smith made telling incursions into the Millers’ area, but could turn it into a chance. Meanwhile, Sercombe was pulling more strings than a pizzicato puppeteer. There was, though, always that uneasy feeling of the fragility of a one-goal lead…and how they disappeared in recent home fixtures. 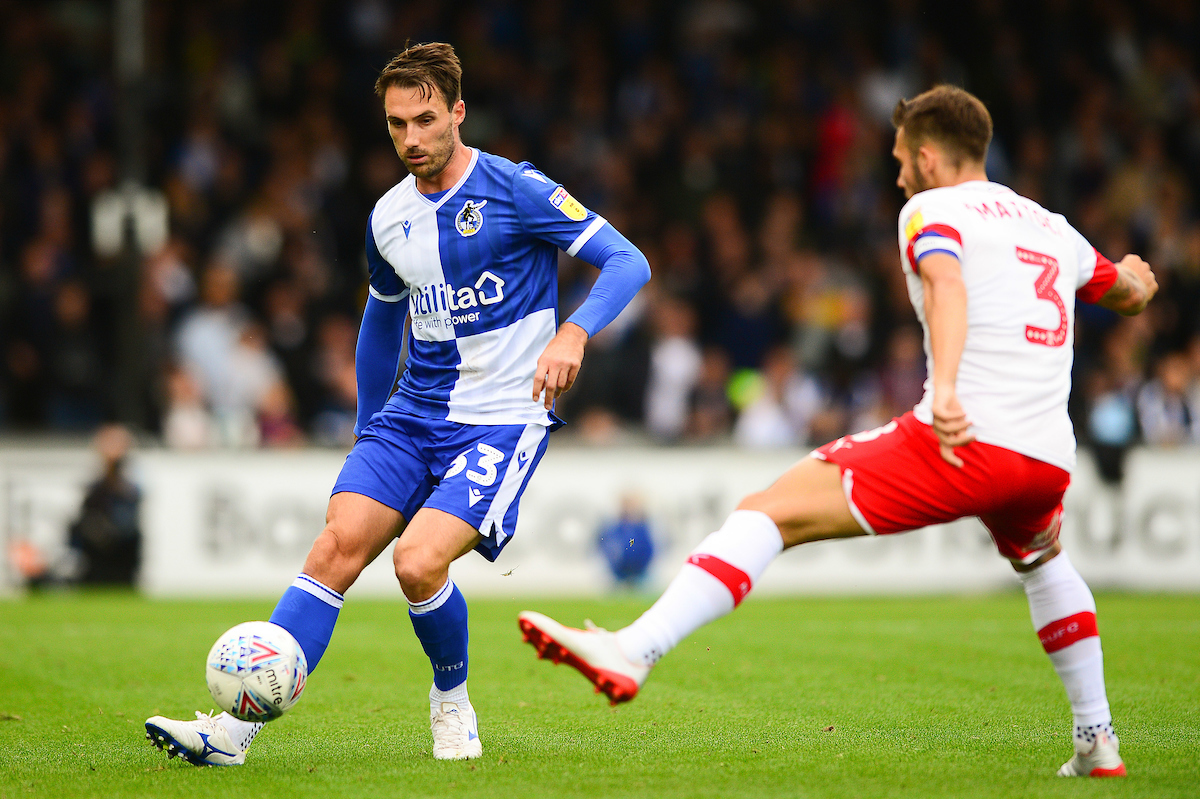 Rotherham made changes; firstly, at right-back with Matt Olosunde on for Jones, then Michael Smith replacing Carton Morris up front. However, it was Rovers who really should have claimed the next goal straight away.

A free-kick turned into a corner, which was fired in looking the for run of Rodman. When half-cleared, the ball was recycled, with Tom Davies whipping in a phenomenal cross which eventually fell to Sercombe. His shot, across goal, was well parried away by Iverson, only to fall to Kilgour who, with the goal at his mercy, headed over the bar.

As Rotherham made their final change, Rovers made their first two, removing the front pair of Clarke-Harris and Smith for the fresh legs of Tom Nichols and Victor Adeboyejo.

With exactly ten minutes to go, Luke Leahy looked to the seal the goal of the season contest before the second month was out, controlling the ball inside and then trying to beat Iverson with a 40-yard lob which all hacks are obliged to refer to as ‘audacious’.

Sercombe then hit a daisy-cutter into Iversen’s arms as the Gas looked for the killer goal to dampen Millers’ souls.

Rotherham had a chance. Olosunde attempt to finish past Jaakkola brought out his Finnish Sunday best, with a fine save, pushing the ball away. He then came for a high, pumped-in free kick, and claimed it. This was not a day in which Jaakkola deserved to be passed. 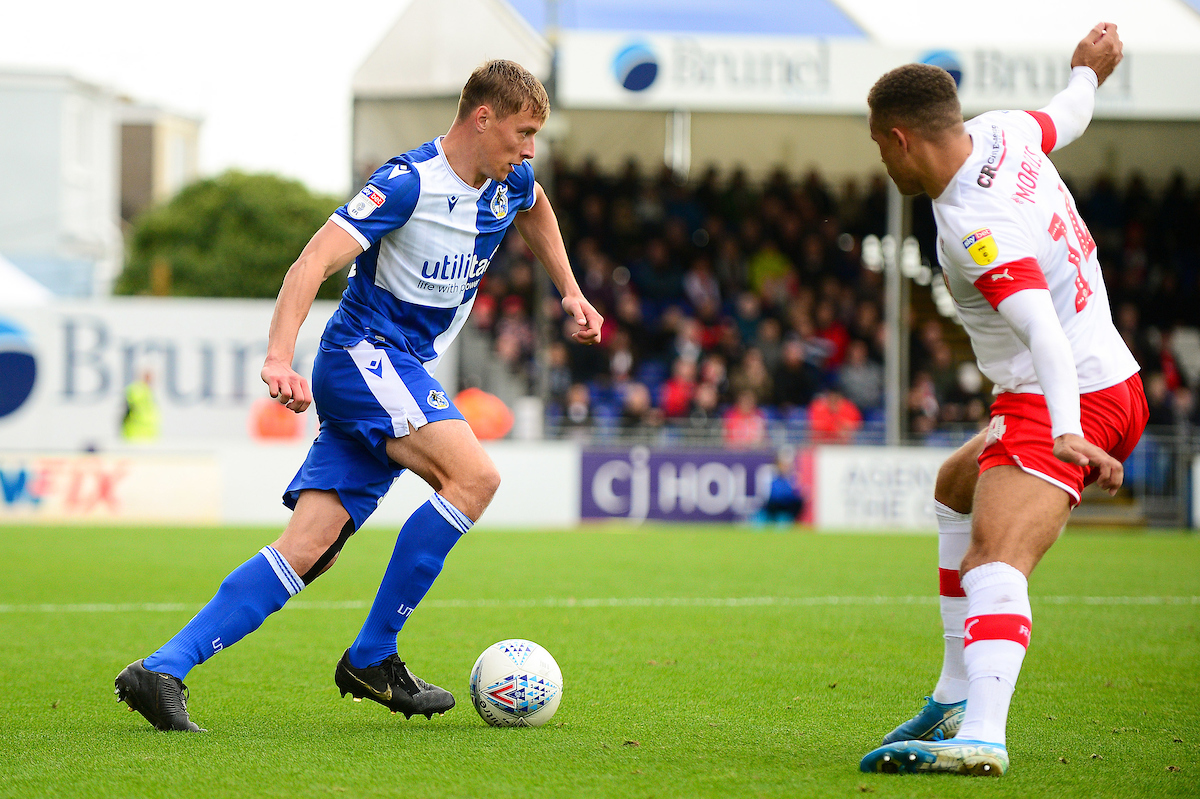 Looking to wrap things up, Rovers broke again, through Nichols. His shot was deflected…Adeboyejo from an acute angle was blocked…and the follow-up narrowly evaded Ogogo.

Straight to the other end, and it looked like Ladapo may provide the inevitable heartbreaker…but Craig put his body on the line.

As did they all, all afternoon. Chalk up another one for spirit, determination, a never-say-die attitude…and a bit of a special striker.