The Gas continued their unbeaten home record with a victory against MK Dons!

A first goal for Tom Davies was enough to separate the two sides at the Mem after he expertly flicked a low cross back across goal and into the top right corner. 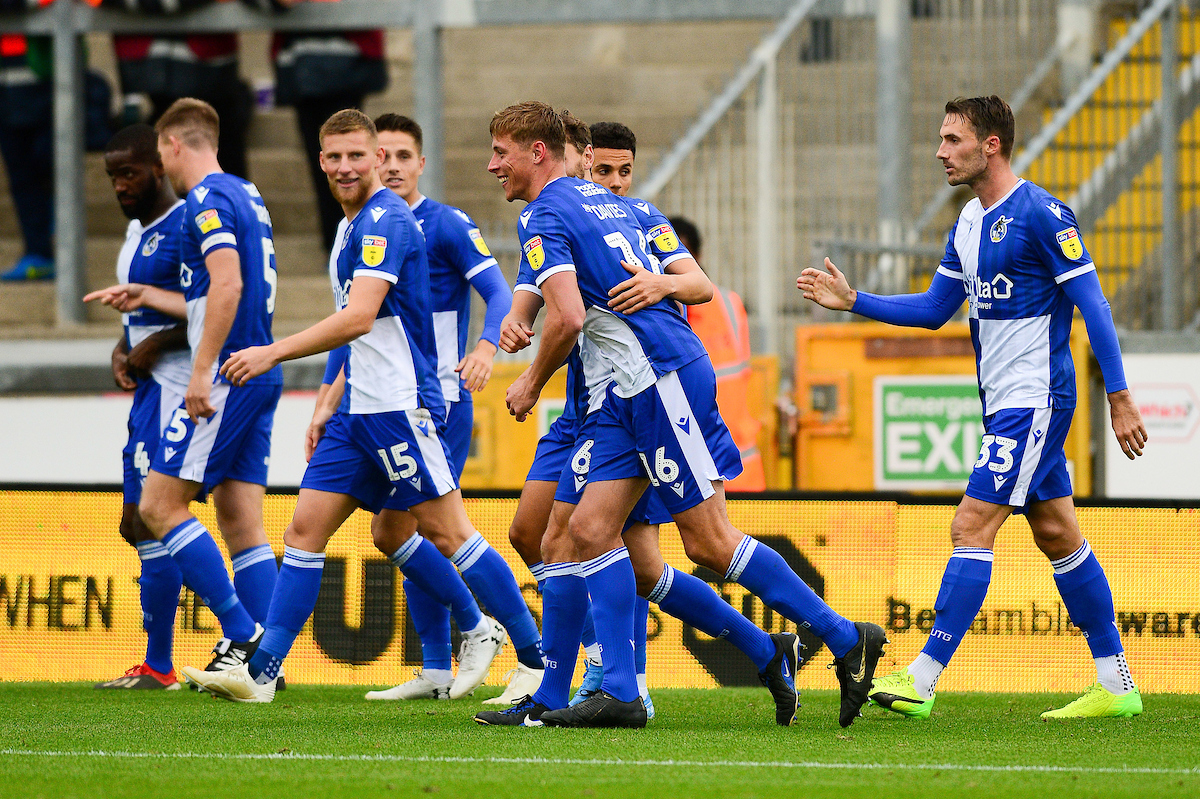 After a good week of rest, thanks to a lack of a game last Saturday, the Gas returned refreshed to face MK Dons. However, they were forced into the two changes from the side that beat Rotherham at the Mem two weeks back. The first came through an international call-up as Anssi Jaakkola was called up for Finland once again, meaning Jordi van Stappershoef would take his place goal for the game.

The other change came upfront, as Jonson Clarke-Harris was ruled out through injury, meaning Tom Nichols would partner Tyler Smith up top. 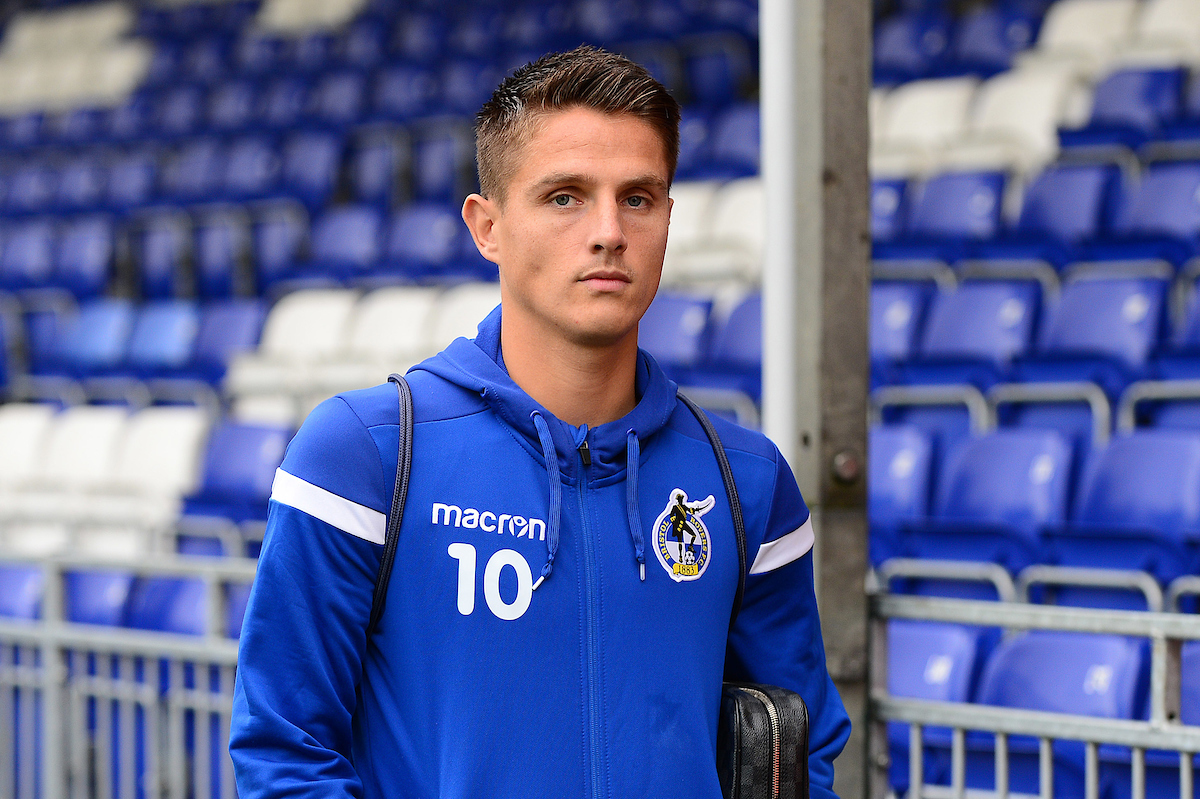 The game started timidly, with a handful of unconvincing clearances from the Rovers defence, but a crunching Kilgour tackle on the 5th minute sparked the first opportunity of the game, in the Gas' favour. Following a sliding tackle, Kilgour wrestled the ball out from underneath himself and played a smart pass to Smith. The striker turned and ran at MK Dons, before firing a shot on goal from the edge of the area which was well blocked by the defence.

At the other end, a dangerous cross the right spelt trouble for Davies who had to deal with it. In the end, he was able to glance the ball out for a corner as he faced his own goal.

Moments later, on the 8th minute, Rovers were at it again as Sercombe drifted a cross in from deep on the right. It found the head of Nichols at the far post, but his attempt lacked the power to beat the Dons 'keeper who caught the shot.

Just beyond the 10th minute, Ogogo launched a dangerous Rovers counter as he chipped a perfectly weighted ball through for Tyler Smith. With the afterburners switched on, Smith outpaced his defensive counterpart and controlled the ball. He looked up and saw Nichols to his right and squared it to his striker partner. On receiving the pass, Nichols took a touch and lashed a strike with his right, which went narrowly wide of the left post.

On the 14th minute Dean Lewington competed with Rodman for a header at the back post, despite not making the ball, the Rovers man did enough to put off Lewington who skied his header.

A calamitous mix-up between two MK Dons defenders almost allowed Rovers to open the scoring close to the 20-minute mark. Two men in red collided whilst chasing the same ball leaving Rodman free on the right and square back to Abu Ogogo. Unfortunately, the ball was played just behind him, and after an awkward first touch, Ogogo lashed his strike well over.

Rodman and Ogogo were involved again in the game's next chance, coming some 15 minutes after the last. Rodman picked up the ball on the right and sent a cross towards a group of Rovers players at the back post. Ogogo made original contact, with the header dropping to Smith who attempted to turn it goalwards with his back to the goal. His effort only found an MK Dons player, and after a bit more of a scramble, was cleared.

After a foul midway in the away team's half, Sercombe clipped a free-kick into the area. Davies got the flick on, but his header dribbled into the arms of the 'keeper.

MK Dons did carve out a chance as the half came to a close, with Bowery squaring a pass to Boateng on the edge of the area, but Boateng's first-time shot went over the bar. 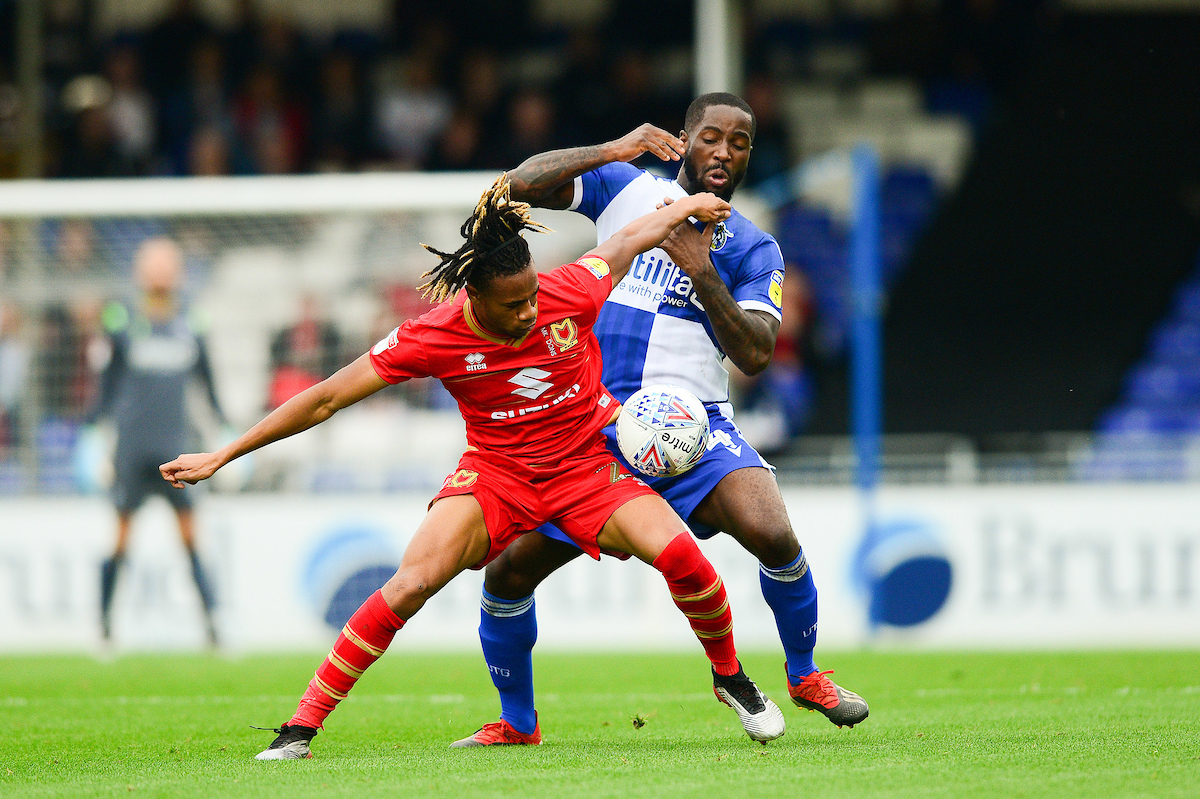 An early 2nd half effort from Liam Sercombe forced a superb save from Lee Nicholls. Tyler Smith delivered a cross from the right which was weakly headed clear. Liam Sercombe fired in the partly cleared ball on the half volley, only for it to be brilliantly parried over.

Moments later, Rovers had their goal. Tom Davies, who had just had an effort saved from close range superbly turned home a whizzed cross from the left. The ball arrived at him at waist height, and he brilliantly adjusted his left foot to clip the ball across himself and into the top right corner. 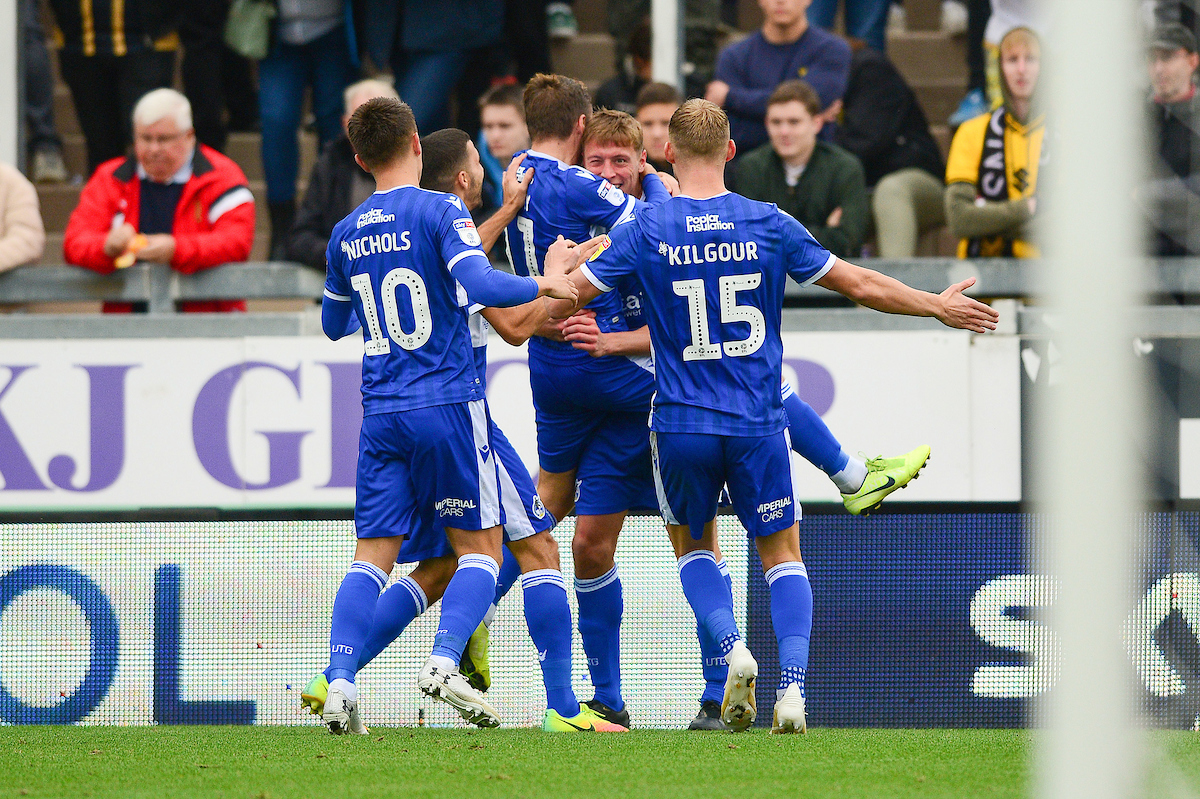 Davies was then involved in the Gas' next chance as he intercepted well in the middle of the park before finding Smith with his pass. Smith turned and ran at MK Dons, but he was shown wide, and his effort from the angle was blocked.

Just before the hour mark, Sercombe was forced off through injury, replaced by Kyle Bennett.

The substitute was involved in a good chance for Rovers as Leahy played a short corner to Bennett. He twisted and turned his way into space before chipping a cross to the back post where Alfie Kilgour was waiting. The defender got a good connection on it but directed his effort just over.

Up the other end, Boateng posed a threat to van Stappershoef's clean sheet as he cut inside from the right. However, his left-footed effort kindly curled it's way into the 'keepers reach and he collected well.

Rovers retaliated through Ed Upson, as he picked up the ball on the edge of the area and drove a powerful effort on goal. It evaded a sea of bodies before eventually finding the gloves of Nicholls in the net, who palmed it away well.

Shortly after, Nichols had a real chance to make it 2-0 as he latched onto a looped cross. Attempted to nod his header back across goal, he lifted it just over the bar.

After the 70th minute had passed, Reeves found himself in space towards the byline on the right side. He smashed a low cross back across goal, which was blocked brilliantly by Tom Davies to divert the ball out for a corner.

Not long after, Upson went down with an injury and was promptly substituted for Cameron Hargreaves. This change was then followed by a swap between Nichols and Adeboyejo. 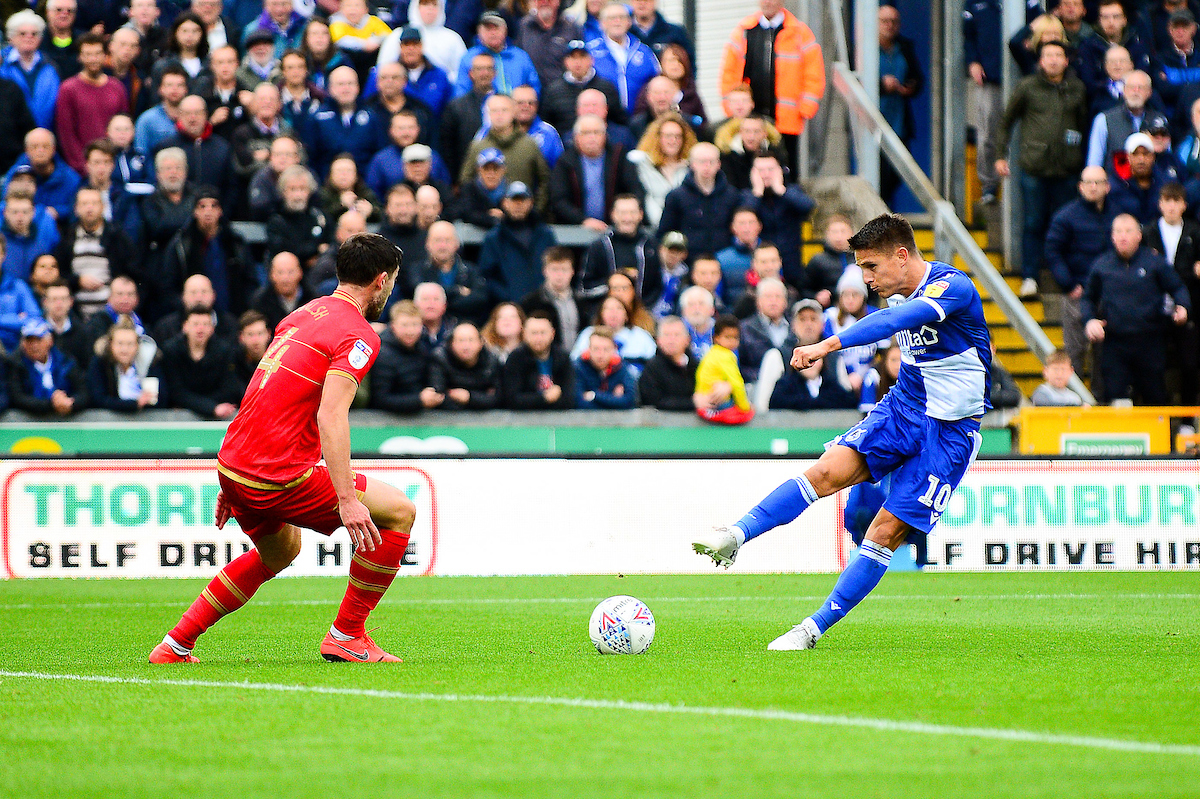 The visitors did have the ball in the net before the final whistle as substitute Asonganyi diverted a deflected cross into the net. However, he was stood in an offside position and the referee agreed with the linesman, ruling out the goal.

This signalled a cagey last 5 minutes or so but the Gas held out for a fantastic three points!

Rovers now look forward to an away trip next weekend, visiting Doncaster Rovers.