Rovers unbeaten run came to end at the Keepmoat - as goals in either half for the hosts subjected the Gas to their first defeat since August.

Tom Nichols saw his first-half penalty saved by Dieng, before Kieran Sadlier headed the hosts ahead, in a first half that had equal chances for both sides.

Jon Taylor doubled the hosts' lead in the second half, poking home after Jaakkola had made a good stop to Daniels in one-on-one play, but could only push the initial effort into the path of Taylor, who made no mistake with an open goal from close-range.

There was a welcome return for skipper Ollie Clarke - who had missed just over a month with injury and was deemed fit enough to return to the side for the first time since our 1-1 draw against Gillingham.

The other change came in goal, with Anssi Jaakkola returning from international duty to replace Jordi van Stappershoef in between the posts.

In the early exchanges - the game was quick to reach a lively tempo. A low cross from Tom Nichols almost provided the games first opportunity, but the delivery from the striker was taken off the boot of Tyler Smith, who was primed to provide the finish from six yards.

At the other end, the hosts looked sharp on the counter. Abs Ogogo came to Rovers' rescue as a low pass from Jon Taylor looked set to sneak across the face of the Rovers goal - with the midfielder doing the sensible thing and turning the ball behind for a corner.

Half chances followed for the hosts - as Tom Anderson rose to meet a Coppinger cross, but the header climbed rapidly over the target.

Jaakkola, on his return to the team, had a relatively quiet first half, with the 'keeper tracking a shot from Whiteman to make a comfortable save and what was a comfortable height for the shot-stopper.

Midway through the first-half, Dieng was tested for the first time. The effort came from an improvised volley from Rodman at the far-post that did look let set for the target, but an alert stop from Dieng stopped the shot creeping in and bundled the effort wide.

Rodman forced Dieng into work again moments later, as the right-back darted forward and was able to break into the Doncaster box before driving a low cross that had to be dealt with by Dieng. 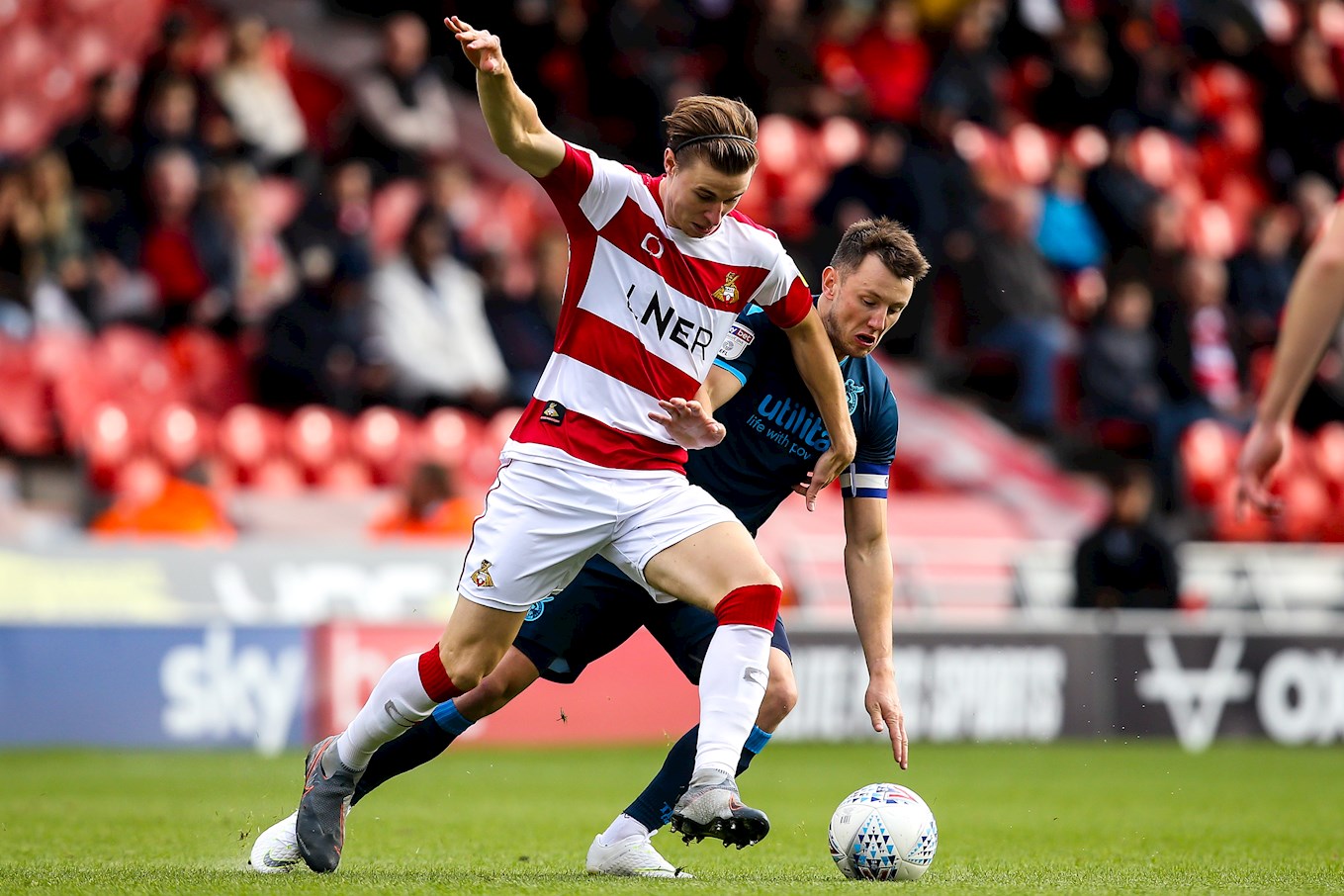 The game's big talking point came just before the half-hour mark, as Rovers were awarded a penalty, after a corner dropped for Alfie Kilgour to attack, only for the defender to be caught by a high foot.

After much protest from the hosts, the penalty was awarded, with Tom Nichols stepping up to take it. The striker dragged out his run-up and opted to go low to the 'keepers left, but Dieng guessed correctly and clawed the effort away to keep the deadlock in place.

The penalty save inspired a wave of noise from the home support and Rovers had to ride out a period of the game that saw Doncaster invert the pressure.

Rovers skipper Ben Whiteman was given the opportunity to dart inside the Rovers area and was dug out a low cross that curled towards goal and forced Jaakkola into making a stop.

The host were able to make the pressure count and grab the game's first goal, in the minutes that led up to the break. It was a cross from Jon Taylor that created the opportunity, with the delivery taking a deflection that increased the trajectory of ball into the six-yard box. Kieran Sadler reacted the quickest and glanced a header from close-range inside the far-post to the hosts ahead.

It was fine stop from Jaakkola that meant the advantage for the hosts stayed at just one goal as the encounter entered stoppage time. It was a close-range attempt from Sheaf that looked likely to find the target, but the Rovers 'keeper got down well to push the effort away from danger. 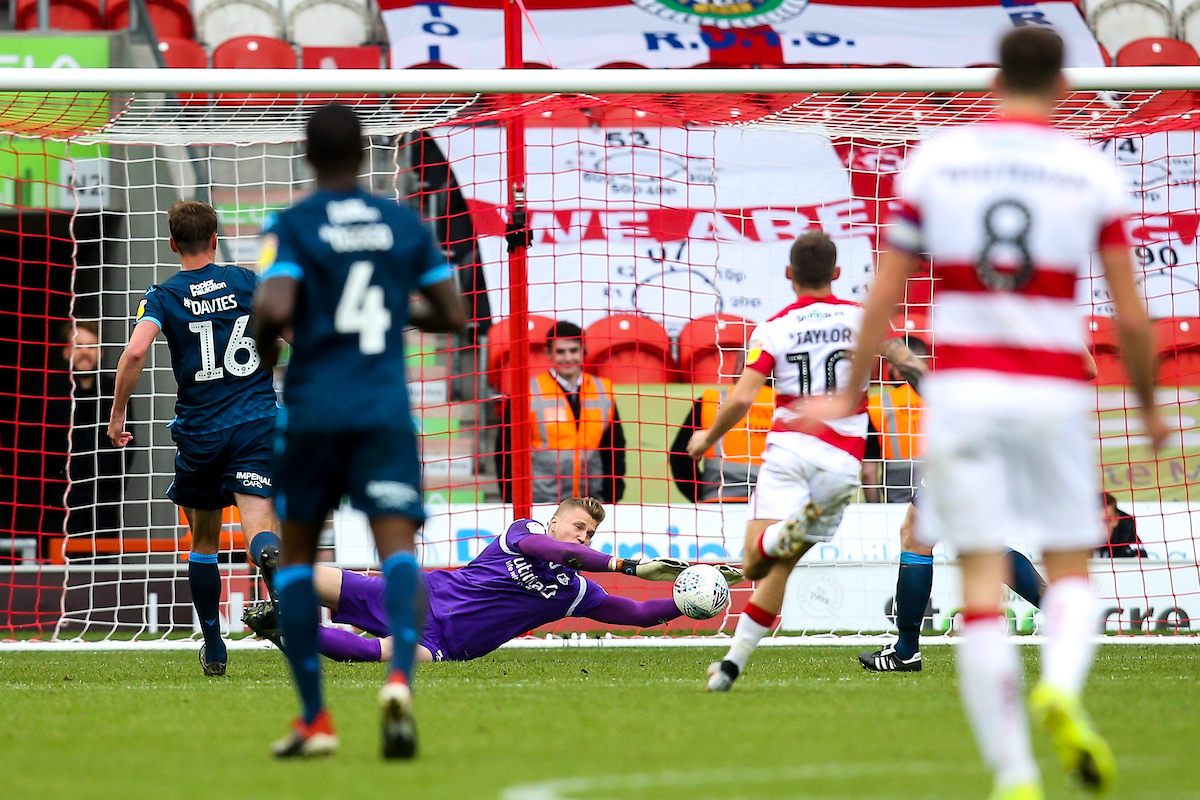 Doncaster continued to apply the pressure after the break, with two chances from Sadlier and Ennis both blocked by some brave defending, as the hosts looked to build on their lead.

The steady flow of chances for the home side soon yielded the all-important second goal, which came a little over ten minutes after the restart. It was a through ball into the path of Niall Ennis that carved a way through the Gas defence, as the ran through one-on-one with Jaakkola. The Rovers 'keeper did well to push clear the initial effort from Daniels, but the rebound fell comfortably into the reaches of Jon Taylor, who slotted the ball into the empty net.

The hosts soaked up any mounting pressure from Rovers attempting to claw a way back into the game and even had a chance to extend their lead further as Whiteman clipped the crossbar with an effort from range.

As the contest entered the final ten minutes, substitute Kwame Thomas span inside the Rovers box and dug out an attempt on goal that Jaakkola touched around the post.

Rovers have the chance to bounce back on Tuesday evening at the Mem, as the Gas play host to Bolton Wanderers.