The Gas emerge victorious from a seven goal thriller!

Two of the best defences in the league produced an immense contest with the Gas narrowly taking all three points from.

Tony Craig and Ollie Clarke got Rovers on their way early in the first half, before Laurent pulled one back for the hosts prior to the conclusion of the 45. Liam Sercombe produced some magic to lob Murphy in the Shrewsbury net and put the Gas in the driving seat, but it wasn't to be an easy win.

Goals from Norburn and Laurent leveled things at the Montgomery Waters Stadium, but a late strike from Abu Ogogo meant his side took all three points away from this absolute thriller. 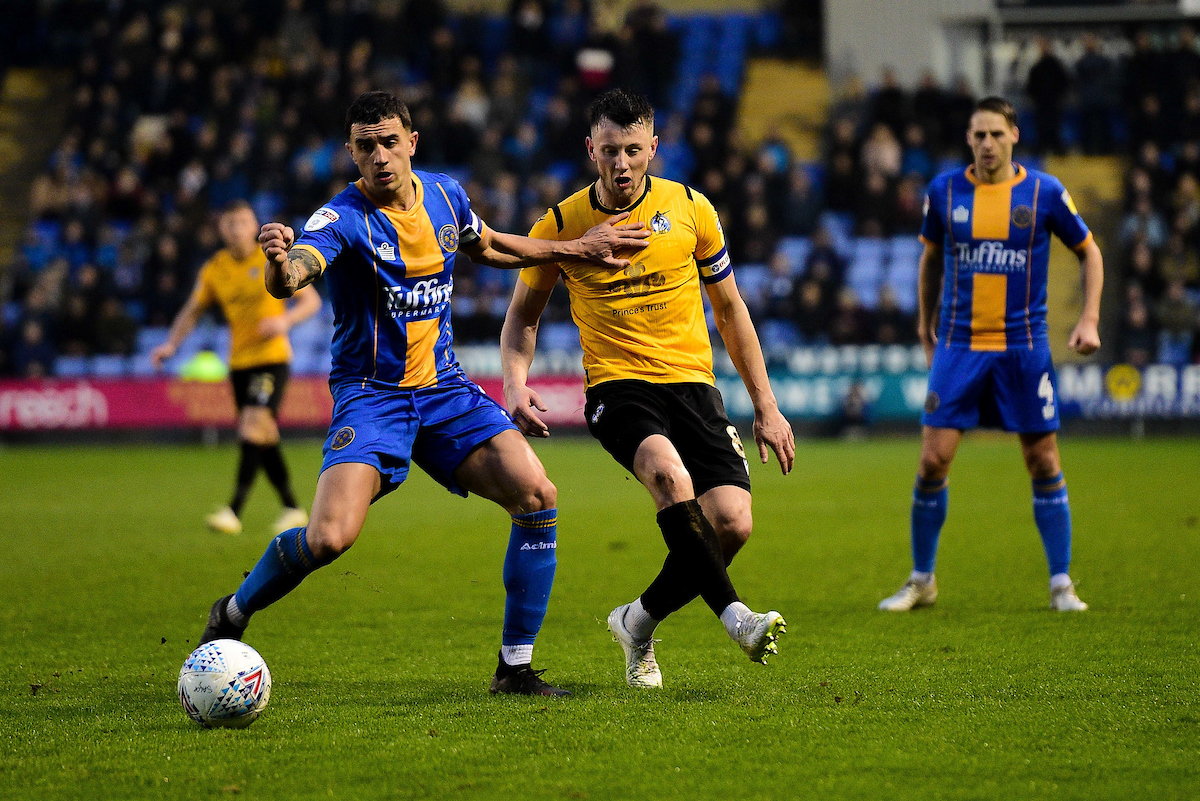 Three changes came from the side that beat Bromley in the FA Cup on Tuesday night, the most notable coming in the former of Jonson Clarke-Harris, who suffered a reaction from the surface in the midweek and did not travel with the side to Shrewsbury. That meant Adeboyejo would come in upfront, starting as a lone forward with Ed Upson replacing Tom Nichols. 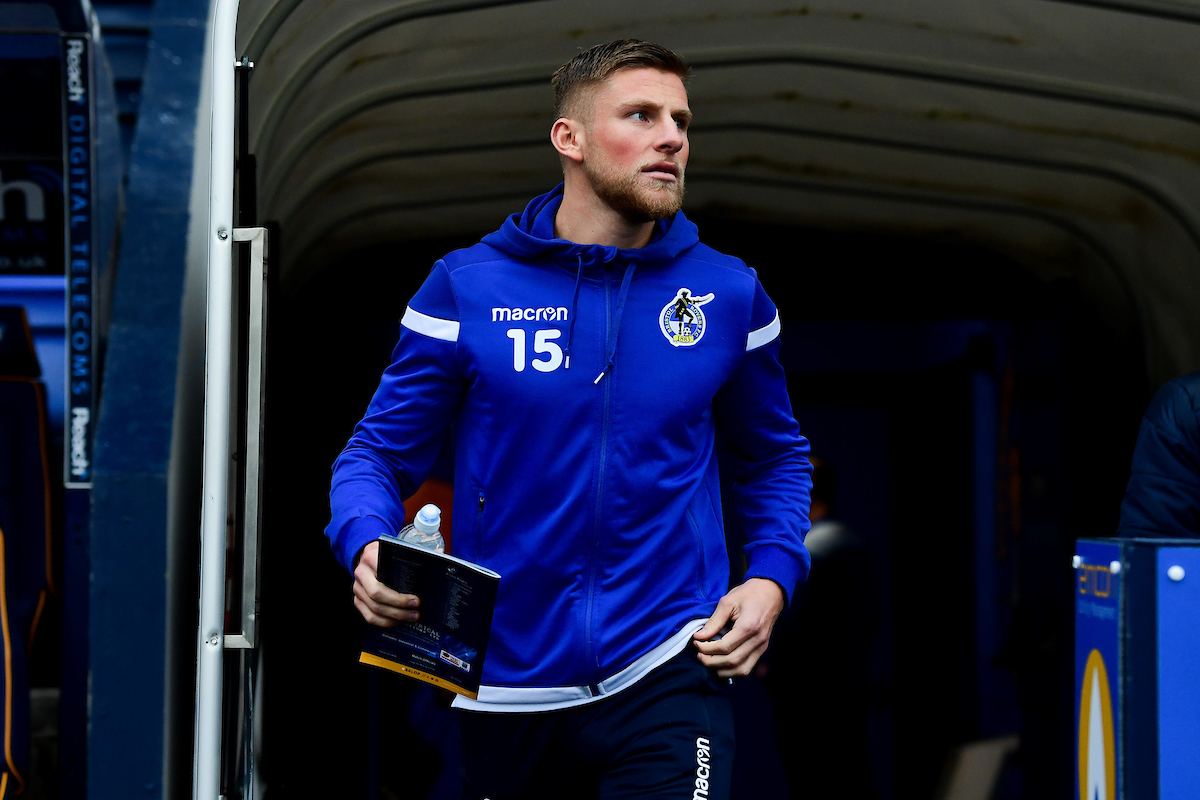 A piece of determined pressure from Ollie Clarke prompted the Gas' attacking foray in the game just before ten minutes passed. He won the ball far up the field before switching back across to Leahy. His lofted ball was cleared behind for a corner kick.

This was a perfect opportunity for Rovers to get a grip on the game and they took it superbly, with Sercombe delivering a ball in towards Tony Craig who nodded a bullet header towards goal which nestled in the left side of the net to make it 1-0! 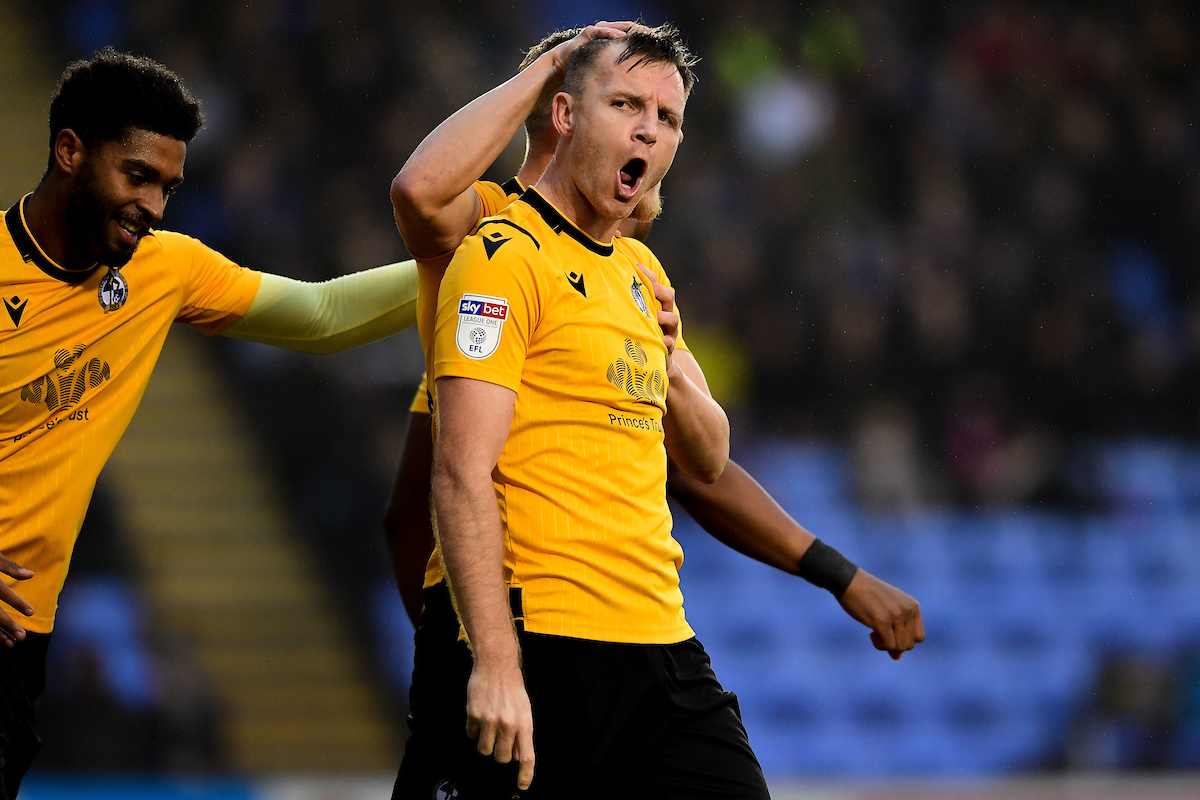 A sluggish start by the hosts was briefly paused as Shrewsbury burst down the left to deliver a dangerous ball into the box. However, Kilgour was on hand the creatively touch it down towards Upson who worked the ball clear.

After Thompson burst into the box alongside Kilgour, there were big shouts from the fans and the Town players for a penalty as the Gas defender appeared to drag back the man on loan from Norwich.

When the referee waved away protests, massive hustle and bustle ensued between both sides. Initially prompted by aftermatch between Thompson and Jaakkola, a total of five players went into the book as a result, with three Shrewsbury players seeing yellow with Adeboyejo booked alongside Jaakkola.

Play finally resumed after a break of several minutes, with the shoving prompting a spicy conclusion to the half.

Ogogo attempted to capitalise on a dis-organised game as the ball fell to him from distance, but he fired a shot high and wide.

An element of good fortune put Rovers two goals to the good in this ill-tempered game as a cross was partly cleared to Mark Little. He struck a first-time volley which was heading narrowly wide, however, almost instinctually, an Ollie Clarke free in the middle stuck out a toe which diverted the effort into the goal, prompting the captain to raise his arms in celebration. 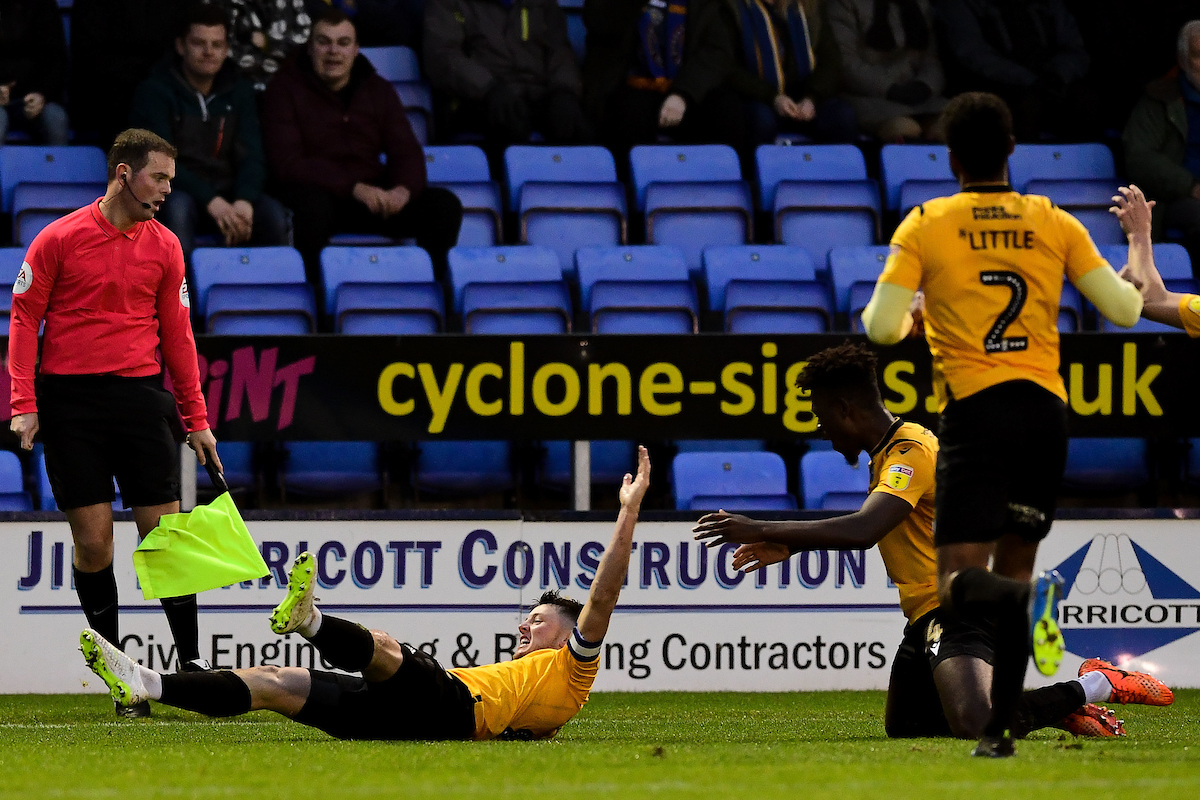 Kilgour was incredibly unfortunate to have his first-ever Rovers goal ruled out as he mimicked Craig's technique to bullet a header home from a corner. It found itself nestled in the net but the linesman's flag was raised, presumably for a Rovers man making a nuisance of himself on the goal line. Unlucky from Kilgour, he did everything right.

With ten minutes left of the first half, Clarke went into the book for a late challenge, making it 3-3 for bookings inside the first 35 minutes, which illustrates the tone of the game.

Moments later, Shrewsbury got themselves back in this one as Pierre pulled the ball back across the box to Laurent who smashed a ball towards goal. Jaakkola got a hand to it but couldn't keep the ball from hitting the net, allowing Shrewsbury an avenue into the game.

As the first half came to the close the Gas had another opportunity as Upson had one strike athletically palmed away by the 'keeper, before it was recycled back to the midfielder who shot again, this time blocked by a Shrewsbury defender. It finally ricocheted to Clarke who attempted to dink a ball across, but the ball wouldn't fall to anyone wearing amber and the home side cleared.

After six minutes of added time, the ref' called a halt to a feisty first half. 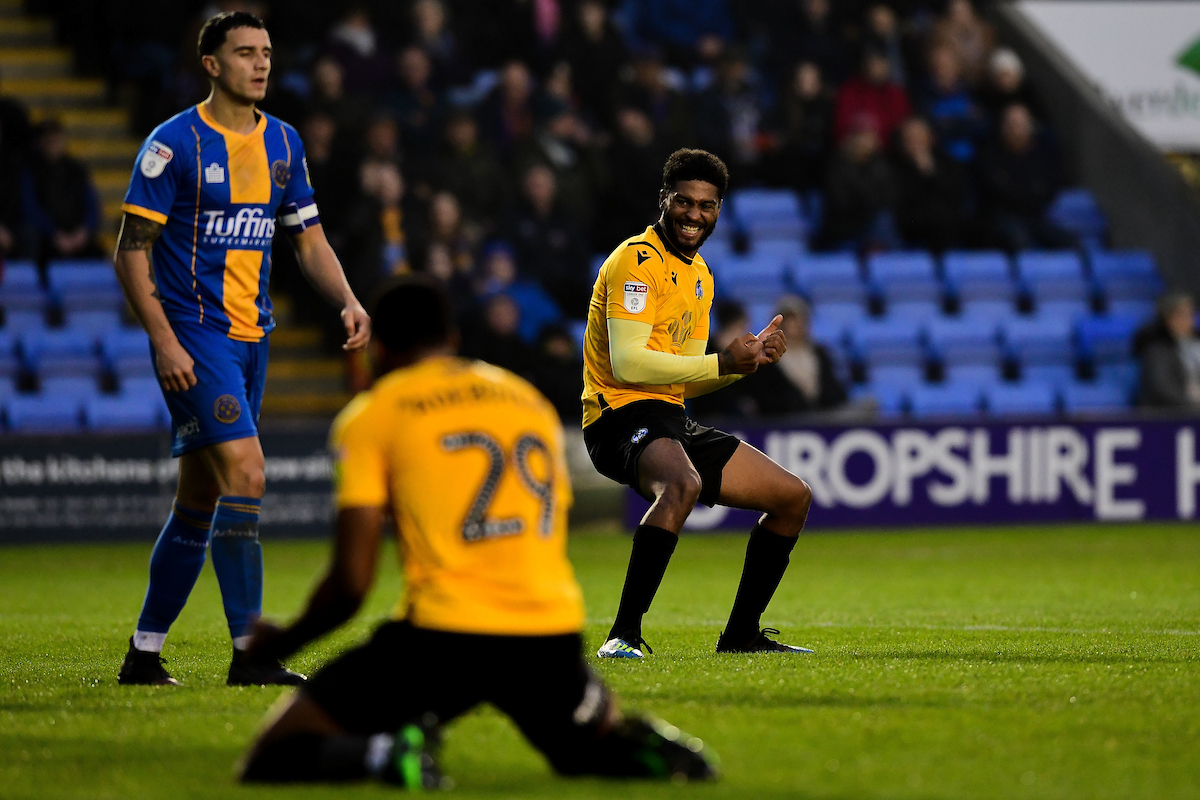 The Gas started the second half superbly through a bit of Liam Sercombe wizardry. A long ball lumped forward was pressured by Adeboyejo as it bounced towards Murphy in the Shrewsbury net, who headed the ball partly clear. However, Sercombe nipped in quickly to seize an opportunity to lob the ball over the now retreating 'keeper, which he took fantastically, neatly dinking the ball into the net from over 25 yards. As he watched it hit the net, he was swamped by men in amber as the Gas took a 3-1 lead.

Sercombe was once again causing trouble for the Gas just after the 50th minute as Clarke drove forward before switching it to his teammate. He cut in with his first touch before hitting a low effort towards the bottom right, however, it lacked the pace to cause Murphy any difficulty in goal.

Clarke and Sercombe's work was really evident in this second half, again combining as the hour mark approached. After a lovely pass from Clarke, Sercombe found Adeboyejo in the box who took a touch before smashing one with his left foot, but his effort found a Shrewsbury defender who cleared. 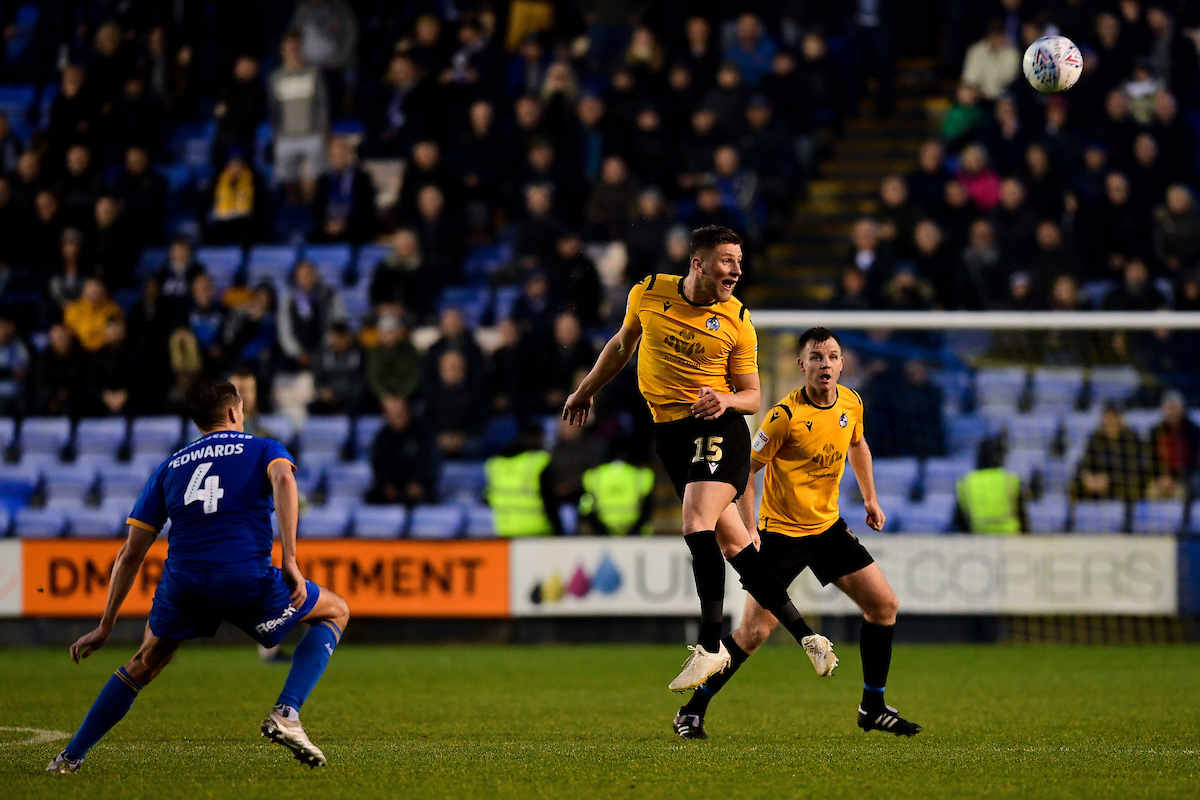 After battling for a few set-pieces, Shrewsbury got the game back on again from a free-kick towards the left apex of the box. Ex-Rover Norburn stepped up and smashed a strike towards goal, which went all the way through a series of legs to make it 3-2 to the Gas.

A cross from deep spelt trouble for the Gas as it made its way through to Laurent who flicked it up for himself before nodding it past Jaakkola to level the game.

Smith responsible for a huge chance for the Gas to retake their lead as he pounced on a set piece to drag a low ball back across goal. It traveled dangerously across the six-yard box but nobody could stab it into the gaping net.

As the Gas looked for a crucial winner, Tyler Smith unleashed unreal footwork to jink his way inside before being hacked down on the edge of the box, the ref' waved play on as Clarke whipped the loose ball into the area. Upson, with his back to goal, acts sensibly to restrain himself from shooting into a wall of Shrewsbury defenders, instead, rolling the ball back to Ogogo. The former Shrewsbury player stepped up and laced his strike into the right side of the net to make it 4-3. 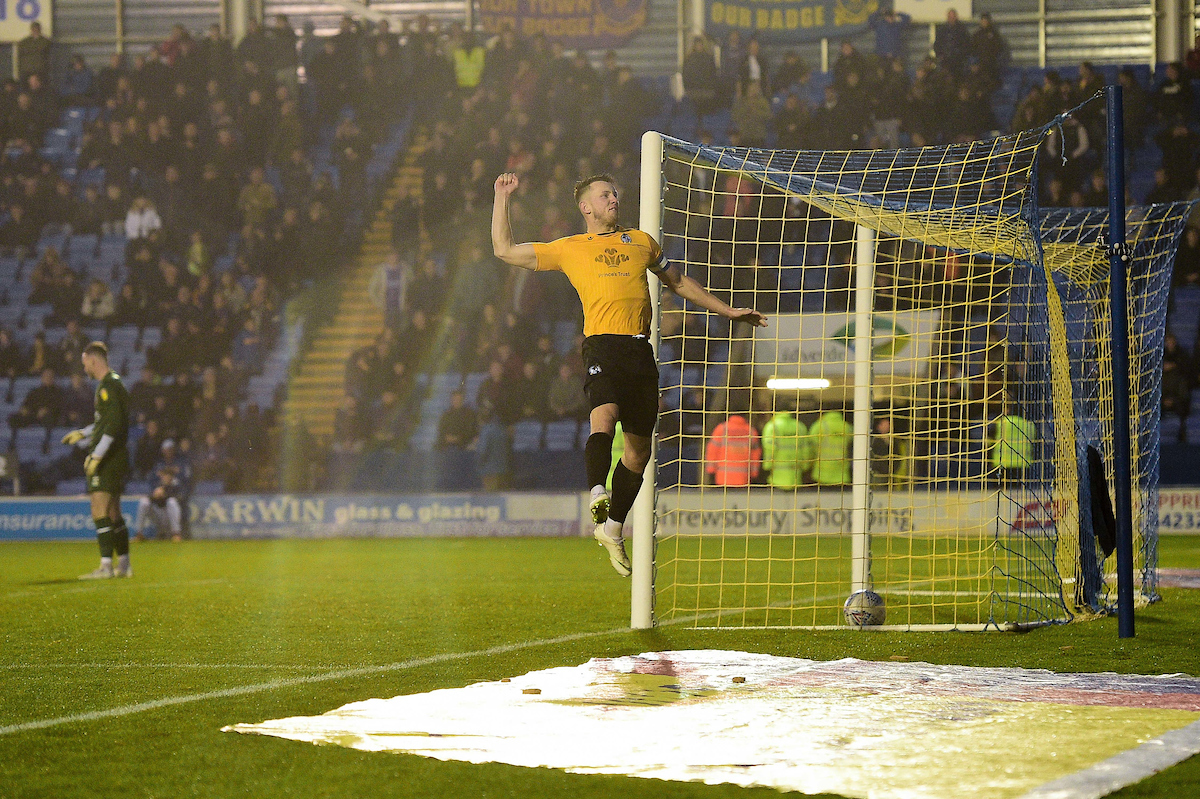 Six minutes added on meant the Gas' nerves were jangling for the remainder of the game.

Shrewsbury found a final chance as the ball was whipped in towards Edwards who's outstretched foot lifted the ball narrowly over the bar from close range.

Another positive note came late on as Tareiq Holmes-Dennis emerged from the bench to make his first league appearance of the season, moments before the final whistle secured Rovers the win. 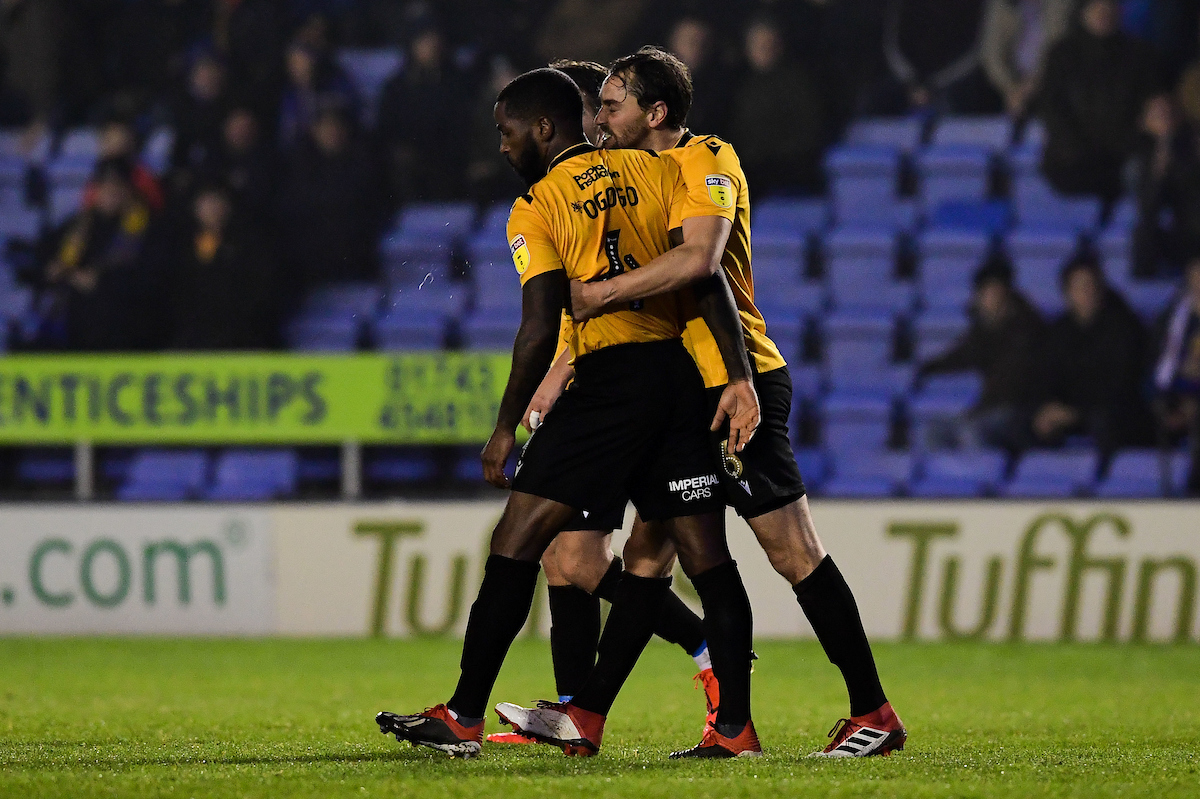