Rovers climbed out of the drop zone with an important victory over Scunthorpe United at Glanford Park on Saturday afternoon.

Jonson Clarke-Harris helped himself to his fifth goal in his last four league games with an efficient finish for the game's only goal, to ensure Rovers extended their unbeaten run on the road to seven games as well as lift themselves out of the bottom four.

Manager Graham Coughlan was forced into a change at left-back, as Michael Kelly was drafted into the starting XI for his first start since the middle of January.

The other change on the teamsheet from Tuesday night saw Abu Ogogo replace Stuart Sinclair in the middle of the park.

Alfie Kilgour, who returned from his loan spell at Maidenhead in the week was listed on the substitutes bench.

Six minutes into a fairly subdued opening, Scunthorpe were the first side to raise some pulses, albeit only slightly, as Tom Pearce cut in on the left and bent a decent strike towards the bottom corner which was saved by Jack Bonham. The rebound fell too quickly for Tony McMahon a couple of yards out who could only watch as the ball ricocheted off him and went behind.

Adam Hammill had a sighter for the hosts not long after, as a cross from the right came all the way out to him on the left. He set himself and looked to swing the ball into the top corner but he couldn't keep it down.

Clarke-Harris netted his first career hat-trick in the 4-0 win over Blackpool last week and looked hungry for more in the early moments at Glanford Park, particularly when almost latching onto Tom Nichols' flick on, which in the end was swept up by Jak Alnwick.

As the 15-minute mark passed, Rovers improved and strung their best move so far together with Clarke-Harris winning a good flick on for Ollie Clarke on the right. The midfielder fed it inside to Liam Sercombe and following some neat one-twos around the box, was given right to James Clarke. The full-back delivered an inviting ball for Clarke-Harris but the United defender did just enough to stifle him; the rebound came out to Kelly who struck a decent first time that rose just over the bar.

However, Scunthorpe were still attacking with purpose of their own as Kevin Van Veen showed smart feet to skip past Kelly and Ogogo before firing a shot a metre wide of the post from 25 yards.

The game returned to its docile state until the 33rd minute, when Rovers went the closest to the opening goal.

Nichols did really well to battle through several challenges down the left, prior to chipping in a cross to the back post that Sercombe took down on the half-volley, cut onto his left and fired onto the base of the post.

It was a sign of things to come as Rovers did then take the lead just minutes later.

Another flowing move saw Coughlan's men advance down the right, before Nichols fired in a clever low cross to wrong-foot the back-peddling Scunthorpe defence. Clarke-Harris took a touch and initially looked to have maybe squandered the chance, but he did no such thing as he dug out a clincial finish on his weaker right foot right into the bottom corner, meaning Rovers went into the interval with a narrow lead. 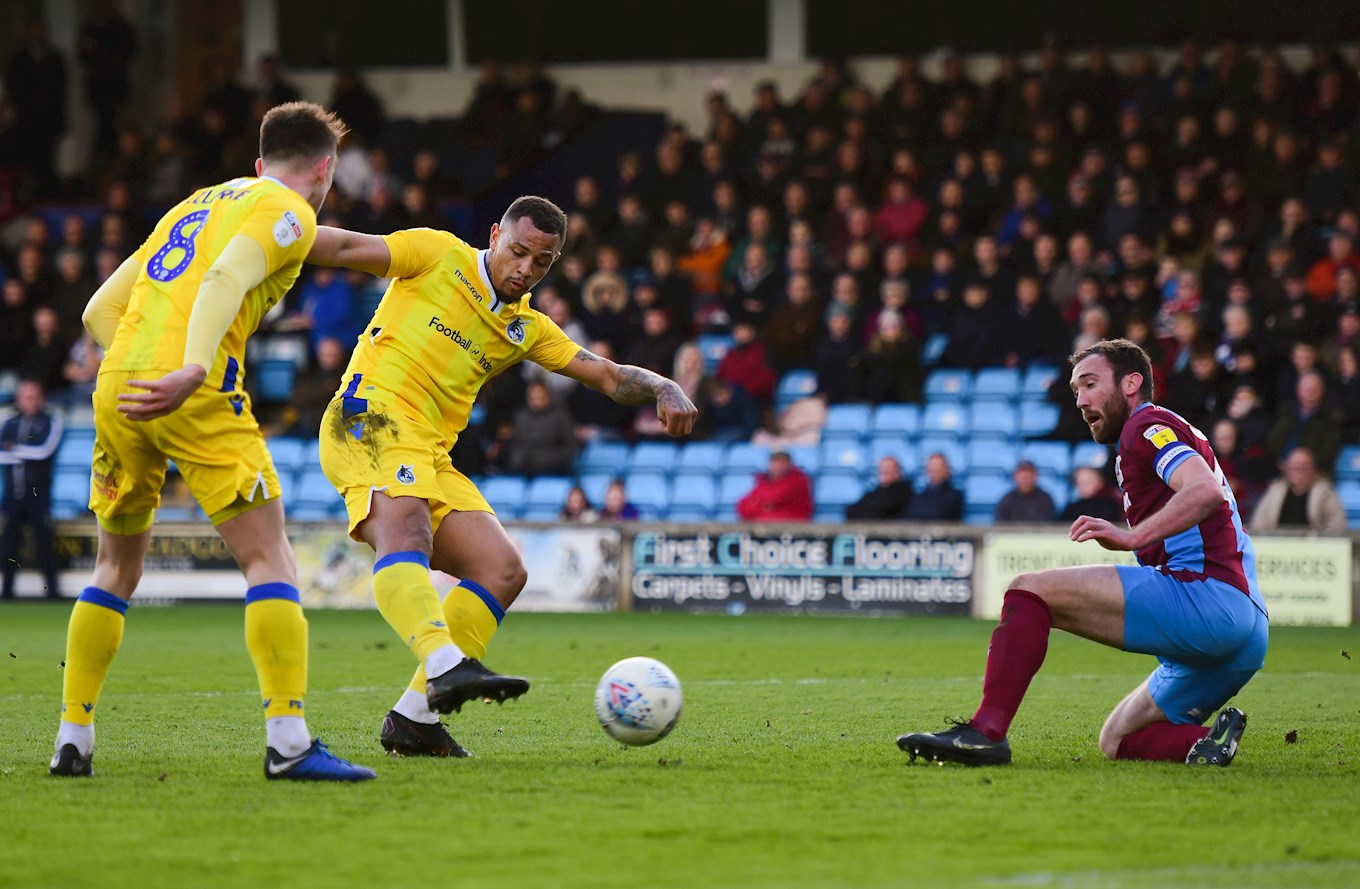 Inevitably, Scunny came out after the break keen to take the initiative and worked a good cross into the six-yard box that pinballed around as Funso Ojo looked to bundle it home, but Bonham did well to divert the attempt.

The pressure continued to grow from the hosts, but consequently afforded Rovers time and opportunity on the break, with Nichols again doing well to skip past his man and clip a ball in behind for his strike partner Clarke-Harris. The 24-year old cut it back to Sercombe via a deflection, who stung the keeper's palms with a powerful strike.

Space continued to open up in the final third for the visitors and Clarke-Harris again was causing problems as he drove through the centre and then teed up O.Clarke to his right but the midfielder's couldn't keep his effort down as it sailed into the travelling Gasheads.

Scunthorpe's best chance of the game came just past 60 minutes, as a corner was met by James Perch six-yards out, but the former Newcastle United man's header ended up the wrong side of the crossbar.

Minutes later and another good opportunity went begging for Stuart McCall's men when Pearce whipped in a delightful cross for Van Veen at the near post. He had only the keeper to beat but his side-foot volley looped over the bar.

Coughlan made his first change on 66 minutes, Alex Jakubiak came on in place of Nichols - another influential performance from Rovers number 10.

Ed Upson earned Rovers' first yellow of the afternoon, for a professional foul out on the right flank.

United's half time substitute George Thomas had impacted the game since his arrival and almost found the bottom corner with a cross/shot across goal, but it bounced just wide.

With roughly 15 minutes left on the clock, Rovers made their second substitution as Sinclair came on for Sercombe.

Ogogo earned a booking for a foul 25 yards from goal on Van Veen, giving Pearce a chance from the free kick, but his effort sailed over the target.

There were four nervy minutes of additional time, but Rovers held strong to record a precious three points. 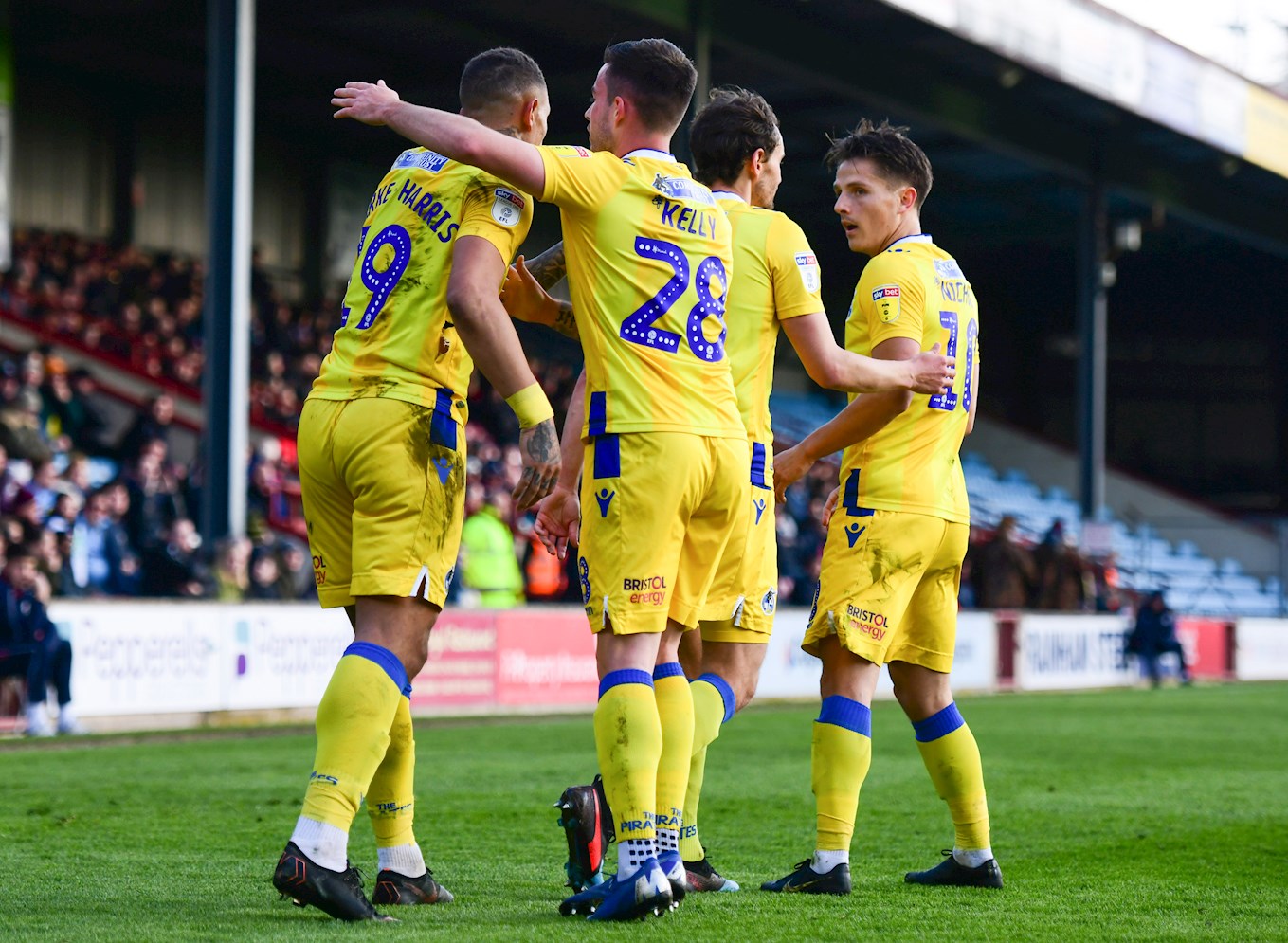 Attendance: 3,877 (awaiting away numbers from Scunthorpe).