Rovers advance to the quarter-final stage of the Checkatrade Trophy with a victory over Northampton Town on Tuesday evening.

Tom Broadbent's goal on the very stroke of half-time was followed up by a Stefan Payne strike on the hour mark - as the two goals proved to be enough for Rovers to book a spot in the final eight of the competition.

It was a powerful but accurately placed finish from Broadbent that saw broke the deadlock, as defender reacted the quickest to loose ball following a corner.

Payne took full profit from a messy clearance from the Northampton defence in the second half, as the ball dropped into his path and he made no mistake in driving a low finish into the bottom corner to add to Broadbent's goal.

Matt Crooks' long-range effort offered hope for Northampton - as the midfielder goal inside the final quarter of the game sparked the home crowd into life, but stern game management from Rovers saw the remainder of the game out.

Rovers will now be in the hat for Thursday's quarter-final draw - with a Wembley final becoming a closer possibilty for the Gas.

There were inclusions for Joe Partington and Tom Broadbent in the back-four, as Sam Matthews was offered the chance to stake a claim out wide, while Stefan Payne was the lead attacking focal point of Rovers.

Both sides took the opening few minutes to settle into the contest. The opening chance fell Rovers' way as a quick burst of pace from Alex Rodman set Rovers on the counter-attack. The winger's winding run occupied the attention of a number of Northampton defenders before he slotted the ball through to meet the run of Stefan Payne. With just the 'keeper to beat, Payne couldn't knock his effort around Cornell, as the Northampton goalkeeper spread himself wide to smothered the shot from the striker.

Payne's chance was a rare sighter on goal in the opening twenty minutes. The host amassed a half-chance on goal as Ash Taylor navigated himself free in the Rovers area to power a header towards goal that was stopped by the feet of Jack Bonham, before the linesman's flag signalled for offside.

In the balance of the game, it was perhaps Northampton who edged the best of the few opportunities registered as the first-half progressed. Following a loose ball inside the Rovers penalty box, Sam Hoskins opted to try out an audacious bicycle kick that flew high and wide of Jack Bonham's goal frame.

Both sides sparked into life as the interval neared. Intelligent positional play from Ed Upson saw the midfielder deflect clear a goalbound attempt from Matt Crooks, while a delicate header at the other end from Alex Rodman forced Cornell to tip the ball around the post at full-stretch.

The deadlock was broken as the 45-minute mark struck - as Tom Broadbent broke free from a corner to fire home a left-footed attempt with venom to mark his first Rovers goal and to put Coughlan’s side in a prime position in the tie. A chance to add to Broadbent’s opening goal followed instantly, as Alex Rodman peeked away from his maker and dived to made a header at the near post to connect with Chris Lines delivery - but the winger's header climbed just over the target.

The opening period of the second half mirrored the start of the first 45 minutes, as chances became few and far between.

A looping cross from a wide position from Alex Rodman picked out the run of Sam Matthews, but the winger couldn't get any purchase on his first-time attempt and it resulted in Cornell making a routine stop.

Rovers' lead was doubled on the hour mark, in what were perhaps fortunate circumstances. A failed clearance from the hosts fell straight to the feet of Stefan Payne, just ten-yards away from goal. The striker made no mistake in thundering home a volley into the bottom corner to add the security of a two-goal cushion. 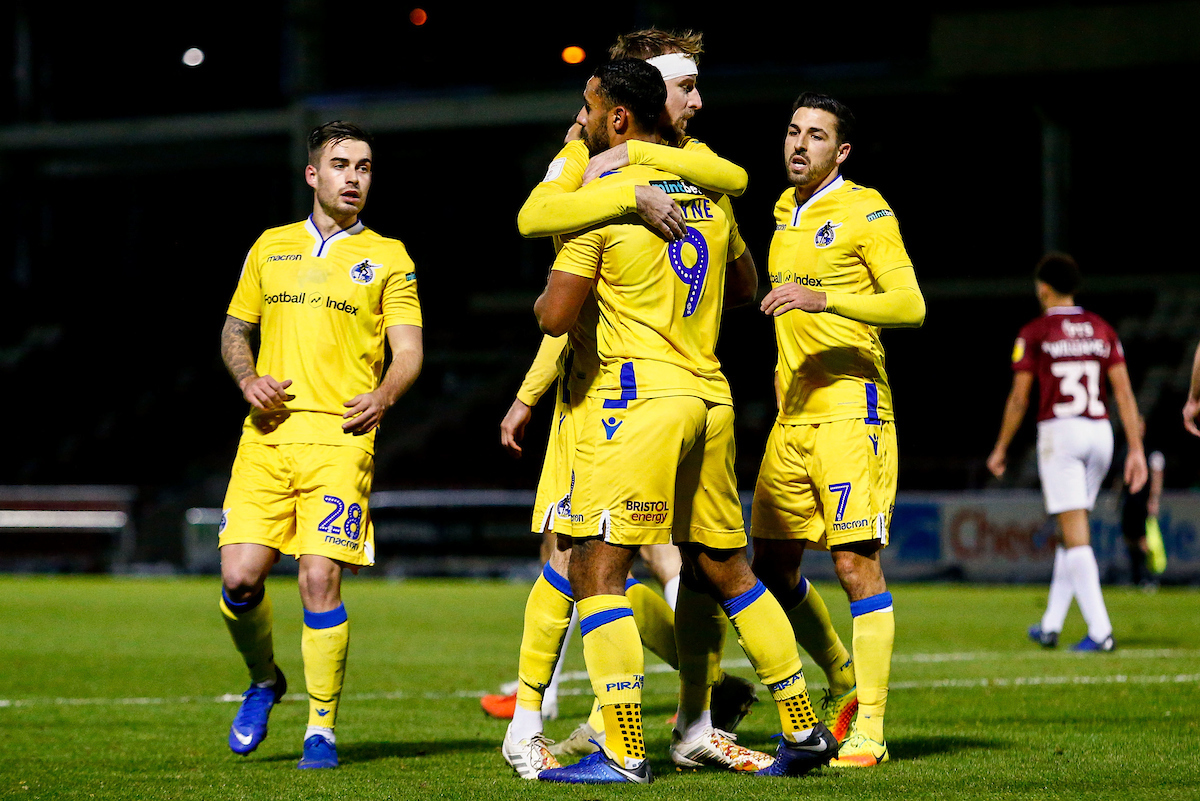 Substitute Daniel Powell had a chance to reduce the deficit with twenty minutes remaining, but after breaking in behind the Rovers back line, the striker directed his finish wide of the target from the edge of the penalty area.

With a comfortable grip on proceedings, Rovers did carve out chances to add to their tally. Again Rodman was able to lose his marker from a set-piece, but on this occasion, the winger's header lacked the direction required and the chance bobbled wide.

Against the run of play, Northampton clawed a way back into the contest with just fifteen minutes remaining. A long-range attempt from Matt Crooks kept low, as a slight hand from Jack Bonham wasn't enough to keep the attempt from the midfielder out as the shot climbed into the top corner.

Inside the final ten minutes, Rovers had stay alert to dampen numerous long balls, crosses and corners aimed into the penalty box, but dealt with the threats from the hosts and limited any clear chances on goal to secure the win.