Rovers suffered a 2-0 defeat at the hands of promotion-chasing Sunderland at the Mem on Saturday afternoon.

Graham Coughlan’s men gave a spirited display, but goals from Luke O’Nien and Aiden McGeady sealed the game for the expensively-assembled visitors.

Jonson Clarke-Harris, having scored from the spot on his full debut on Tuesday at Portsmouth, kept his place in the starting line-up, joined by Gavin Reilly. Alex Jakubiak was the man to make way to bench, where he was joined by Ed Upson and Joe Partington, whose places were taken by Ollie Clarke and Alex Rodman.

The game started at a ferocious pace, with Rovers clearly intending to prove they were not intimidated by their lofty opponents. The visitors were allowed no time on the ball as the home side pressed and harried from the first whistle, looking to pin Sunderland back towards their busy away end.

In front of the travelling Black Cats, good work from Alex Rodman drew a free-kick that Liam Sercombe clipped a little too high for those in the area.

Sunderland, via Aiden McGeady, lifted a trip of crosses into Rovers territory, but two were easily pouched by Jack Bonham and third broken up by a crucial Tony Craig header.

Rodman had the first shot of the game, on 14 minutes, picking up on the ball after a superb burst by Abu Ogogo, but not catching the ball cleanly, and dragging wide.

Controversy reigned at the midway point of the first half, stemming from an O’Nien tackle on Reilly. The Scottish forward neatly flicked sideways to Sercombe, but caught a cruncher from O’Nien as he laid the ball off. Sercombe’s touch was a little heavy, and as Sunderland intercepted, Rovers anticipated the award of a free-kick, with the referee’s advantage having broken down.

Referee James Linington did stop the game, to caution O’Nien for his recklessness, but decided Rovers had been their own downfall as far as the advantage went.

Inside two minutes, O’Nien the man to put Sunderland in front.

McGeady and Leadbitter took a short corner and lifted the ball to the far post, where Will Grigg had read the play best. His knock down found O’Nien sniffing around, and the full-back forced home from close range.

The goal settled the visitors, with experienced central midfield dup Leadbitter and Cattermole helping to dictate the play, but their apparent control did not equate to chances, and Rovers began to forge their way back into the affair. 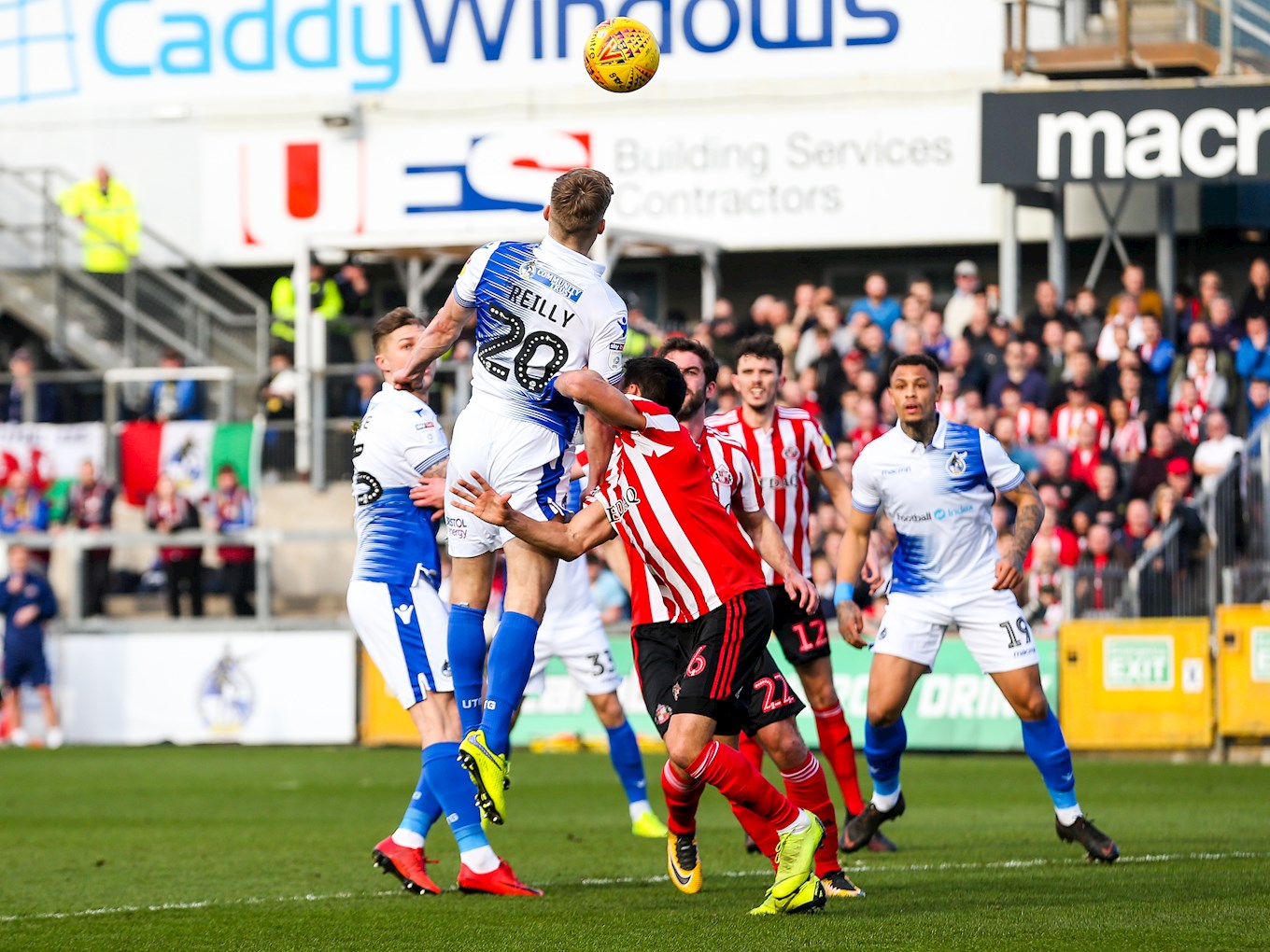 It may not always have been pretty, but the inclusion of Clarke-Harris gave the Gas an outlet they have not always had, and a series of direct diagonal balls found the new man’s head. However, few flick-ons found colleagues, as relationships, in their early days, continue to develop.

Rodman cut inside, beating a couple from the right before shooting weakly wide, then was involved in the build-up along with Sercombe, Reilly and Tareiq Holmes-Dennis as they linked to tee up Ollie Clarke, who sliced wide.

Reece James made it a pair of Sunderland full-backs to go into the book, just after the interval, as he plunged his studs into the abdomen of Rodman, but another set-piece delivery missed everyone.

At the other end, though, Sunderland made the dead-ball count.

As a scramble ensued just outside in the Rovers’ penalty, a prone Sercombe’s instinctive handball was spotted by the referee, who gave the visitors a free-kick exactly on the edge of the D. From 22 yards, McGeady flipped a ball over the wall and down into the unguarded corner of the net.

Graham Coughlan brought on Alex Jakubiak for Reilly, and the substitute quickly won a corner from a long ball by Tom Lockyer, following an excellent piece of defending by the skipper. Sercombe’s corner was met by Tony Craig, who headed just over.

Cattermole made an uncharacteristic mistake to present the ballot Clarke-Harris, who was hacked down by Jimmy Dunne to give Rovers a free-kick about a yard closer than McGeady had scored from. Sercombe tried the same free-kick, and put it about a half a yard over.

Rovers continued to apply pressure in a search for a goal that would give a flicker of hope, and gave Sunderland plenty to do defensively – but they did it well.

Late in the game, their forays forward increased, and were threatening, too. On three occasions substitute Charlie Wyke looked to capitalise on good work by his fellow replacement Lewis Morgan, but was just off target each time.

There can be no qualms about the result, but this was no one-sided affair. When Sunderland visit again in 10 days’ time, they will face no easy route to that famous arch in West London. 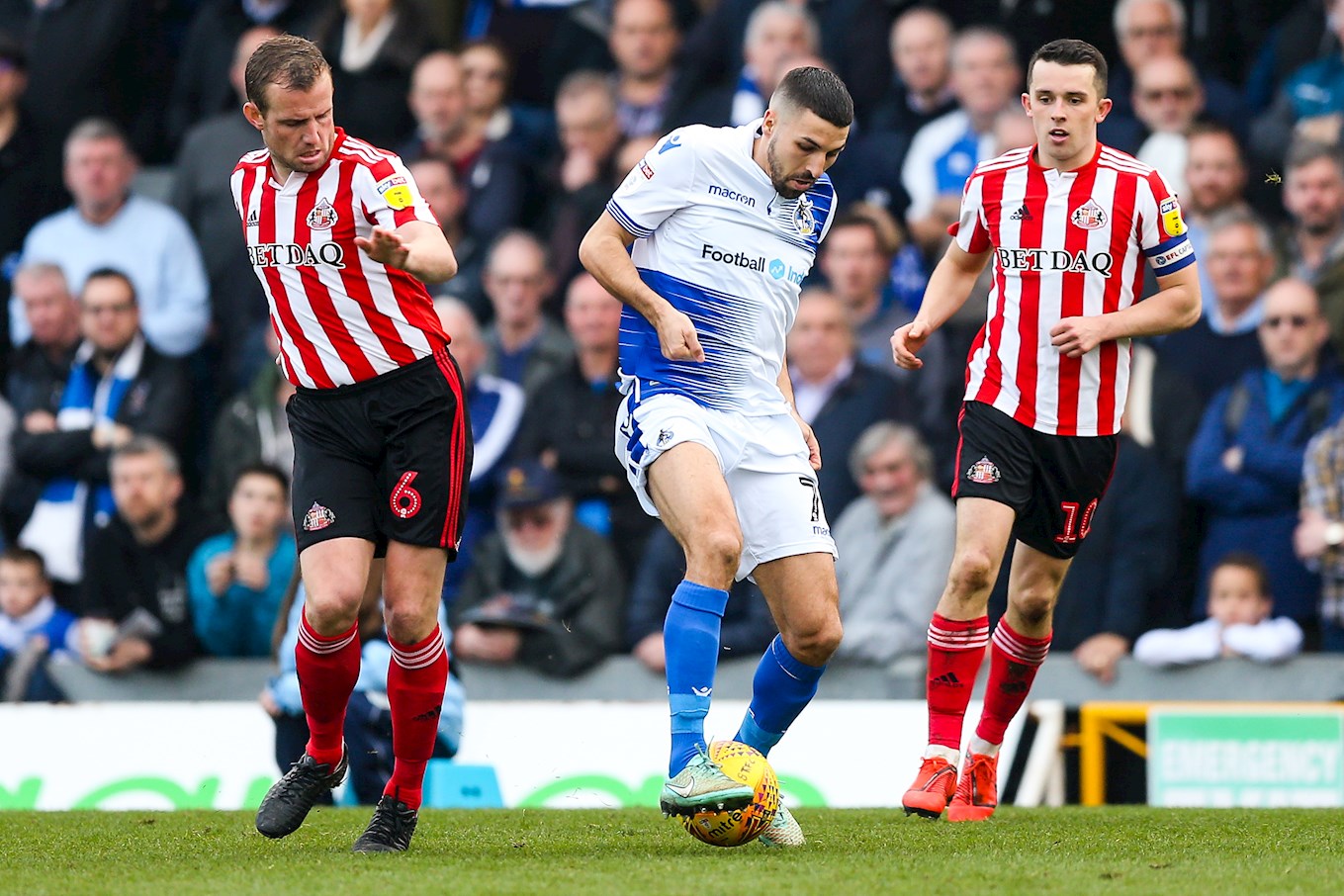