The Gas lose 2-1 after a second-half comeback from AFC Wimbledon.

Rovers took the lead through a penalty with a matter of minutes to go inside the first half, with the ref' adjudging a Dons player to have handled the ball in the box. JCH stepped up and leathered the ball into the roof of the net to put his side 1-0 up at the break.

Wimbledon however, were not down and out despite a lack of attacking impetus in the first period, fought back in the second, with Joe Pigott's strike palmed to the feet of Marcus Forss who prodded home from close-range. Late on, a whipped cross from Guinness-Walker struck the foot of an unfortunate Alfie Kilgour, deflecting the ball into the net putting the visitors in an unlikely lead. 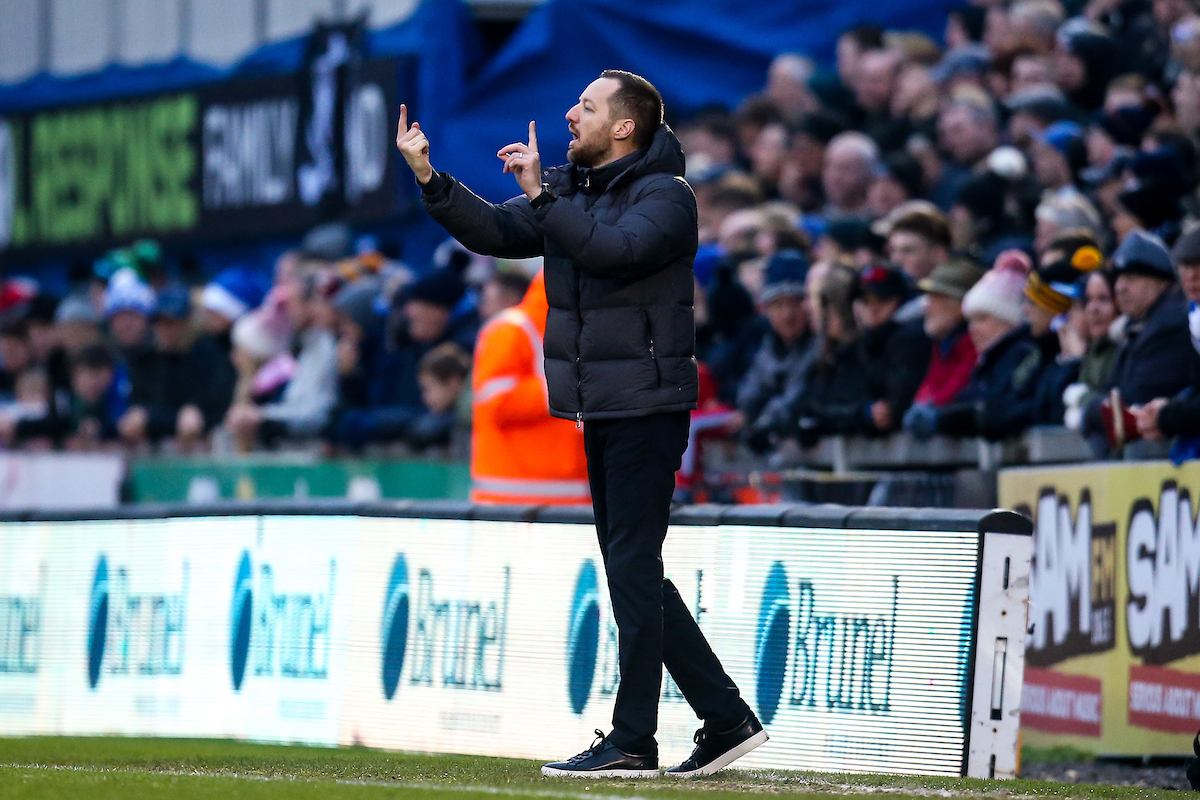 Ben Garner made two changes from Kevin Maher's selection against Peterborough United, with Abu Ogogo returning from injury, replacing Ollie Clarke who drops out of the matchday squad. Elsewhere, after coming off the bench in the Gas' last outing, Jonson Clarke-Harris started, alongside Tom Nichols.

Despite a period of early pressure for the Gas, it was Wimbledon who got the first shot away, with Sanders cutting in from the right before striking from the edge of the box, but he saw a vital Ed Upson touch take it over the bar.

For the first quarter of an hour at least, Rovers showed absolute dominance over their opposition in possesion but struggled to break down the Wimbledon defence, but their first chance fell to Tom Nichols not long after 15 minutes gone.

Upson pinged a ball from deep towards Jonson Clarke-Harris who cushioned the ball into the path of Nichols. Crowded by Wimbledon players, he hit it first time with his left on the half-volley but saw his effort go past the left post.

Not long after, Luke Leahy attempted a speculative effort from a crossing position on the left-hand side as he struck a first-time effort at Trott, but a kind deflection took it towards the 'keeper who caught well in the end.

As the 25th minute approached, the Gas had the ball in the net as Leahy slid the ball away from a recovering defender. He squared it back to Sercombe who calmly stroked it into the top right, but the ref' ruled it out, siting a foul from Leahy as he retrieved the ball from Wimbledon. 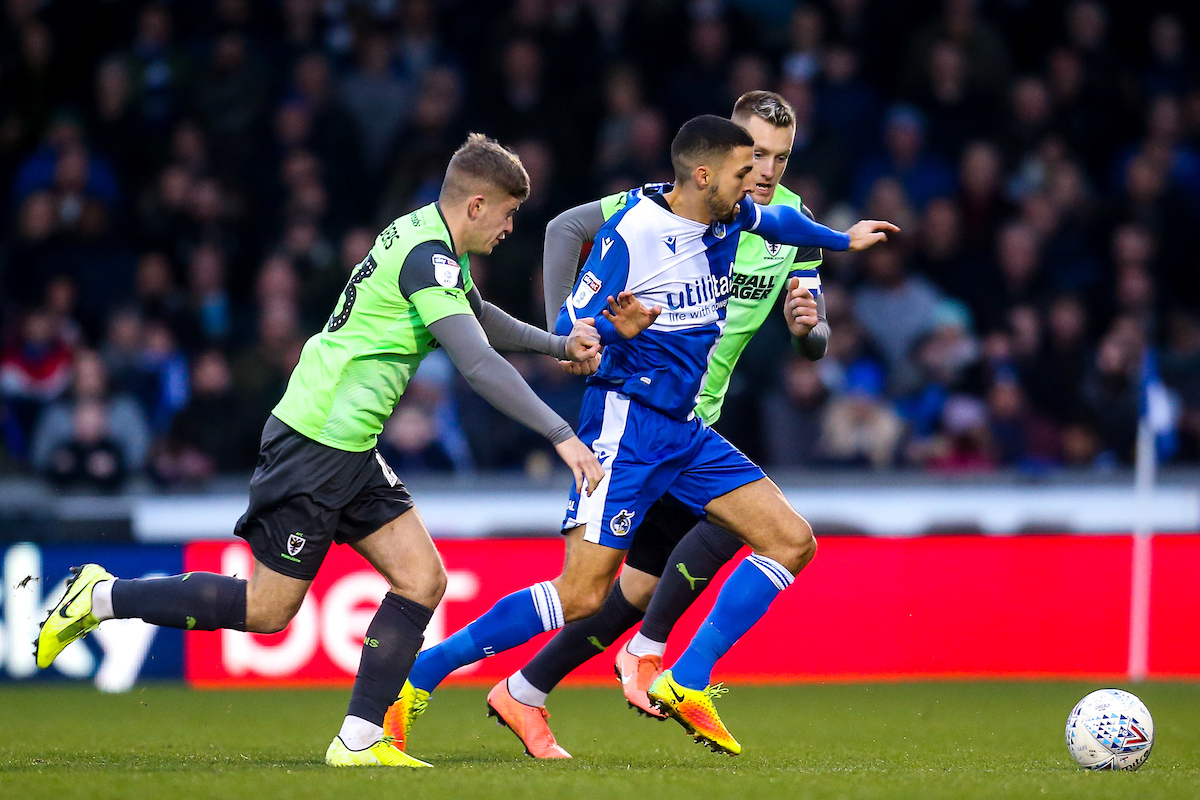 Almost immediately from the restart, Rovers carved out another chance as JCH knocked it forward to Nichols who controlled well with his chest. He turned with the ball, getting sight of goal and attempting to curl one in from distance, just clearing the crossbar with the strike.

The Gas were knocking on the door and almost worked a golden opportunity before the half-hour mark, with Rodman drilling a ball low from the right towards JCH. The striker stretched for the ball, but despite getting a touch on the pass, he couldn't get it under control, as Trott rushed out to collect.

The clear threat was through the Gas' big man up front, as JCH continued to cause Wimbledon problems. He picked a pass up from deep, taking a touch and striking a snapshot from 30-odd yards out. It bounced before the 'keeper, causing Trott further issues, but he reacted well to palm it before following up and pouncing on the ball.

With a few minutes to go in the first half, Rovers found a way to put themselves in the driving seat. A ball was partly cleared by Wimbledon, but Upson looped a header back into the danger zone, where the ref' adjudged a Wimbledon defender to have handled the ball in the scramble, giving a penalty. JCH stepped up and rifled the deadball into the roof of the net, securing the Gas a 1-0 lead to take into the break. 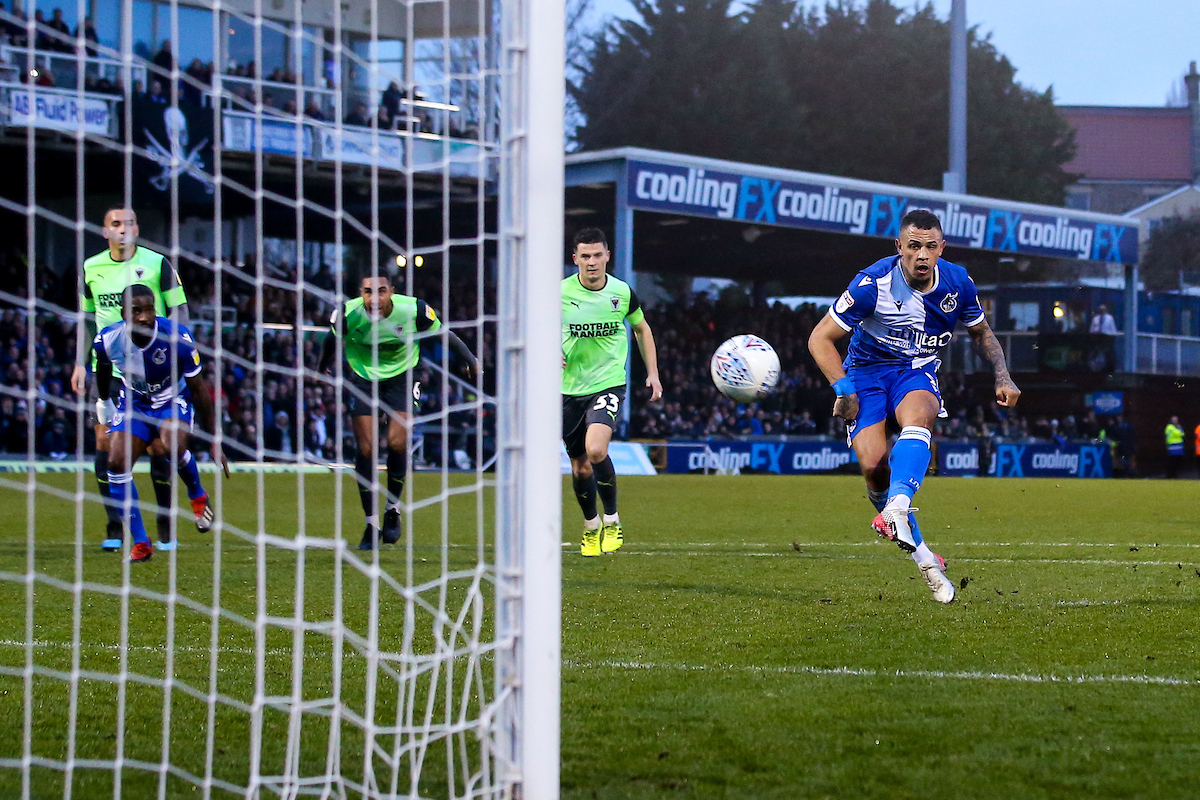 The second half began how the 1st ended, with Rovers pressure as Ed Upson carved out the first half-chance of the 2nd period. The midfielder touched it down towards the byline on the right side, before firing a cross into the six-yard area. JCH jumped and stretched to make the ball, but his flick wasn't directed goalwards, and instead looped backward over his head.

Just before an hour passed, Wimbledon produced a bit of creativity to work some space on the right side. With the ball coming to Pigott with time to look up and pick out a dangerous cross, instead though, he shanked his pass and sent it over Jaakkola's bar.

This signaled a change of approach for Wimbledon who tried to get the ball down from this point on, throwing a few men forward too. Forss, Wimbledon's danger man, with 11 goals so far this campaign prompted a save from Jaakkola as he jinked his way past Menayese on the left. He shot from a narrow-angle, with the Fin tipping it around the near post. 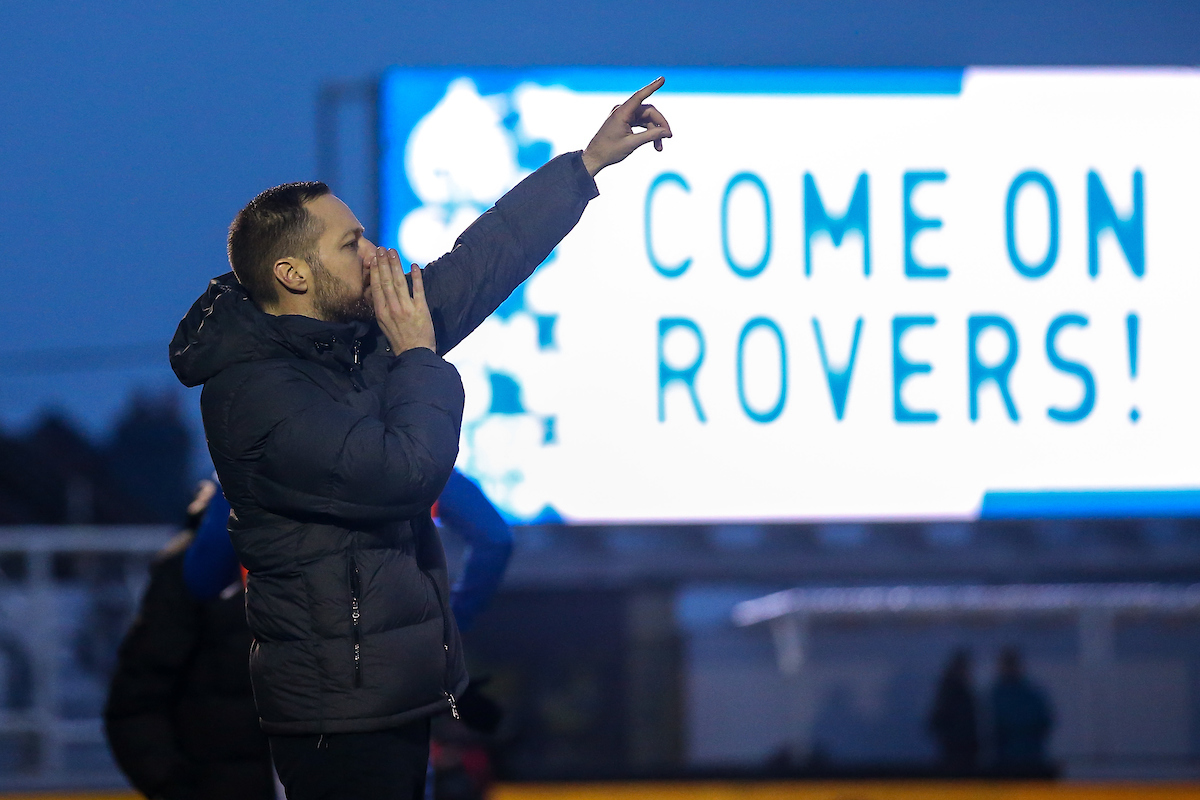 From the resulting corner, the away side picked out O'Neill in acres of space in the box. The defender flicked his header goalwards, needing lightning reflexes from Jaakkola to stop the ball dead from point-blank range, before sweeping the ball clear with his foot.

On the 65th minute, JCH, still coming back to fitness, was substituted, being replaced by Victor Adeboyejo.

Not long after though, Wimbledon got themselves back into the game as Joe Piggott struck on goal from the left side of the box. Jaakkola scrambled to make the save, pushing it back out towards the Dons player, who hit it back goalwards. The Fin once again got a hand to it but this time it deflected into the path of Forss who prodded home from close range.

With 15 to go a high hooked cross found Leahy at the far post, who did well to flick it back across goal towards Sercombe. It sat up perfectly for a volley but the midfielder scuffed his shot and saw it hooked away by Wimbledon.

With seven minutes to go, Guinness-Walker pressed down the left-hand side before firing a low ball into the box from the byline. With a melee of players near the line, it struck the foot of Kilgour which saw the ball divert into the net.

The Gas now face a trip to Fleetwood Town on the 29th.