The Gas went down to a last minute goal from the talismanic Glenn Murray...

Glenn Murray has spent his life being in the right place at the right time. For Gasheads, his timing could not have been worse.

Murray found space in the six-yard area, 91-and-a-bit minutes into a pulsating cup-tie at The Mem, in which Premier League Brighton and Hove Albion did not overshadow a determined Rovers, but they did pinch a win at the very, very end.

Albion had taken the lead through Aaron Connolly, but Rovers equalised via a Tom Nichols strike, and were more than worthy of it.

Rovers were…not plucky. We will not say plucky. That word conjures thoughts of trying hard with little quality. This was not the case. The side two divisions inferior showed genuine ability, time and again, and displayed intent to win the tie. Perhaps, ultimately, it was their downfall. But golly, the attempt was a valiant one. 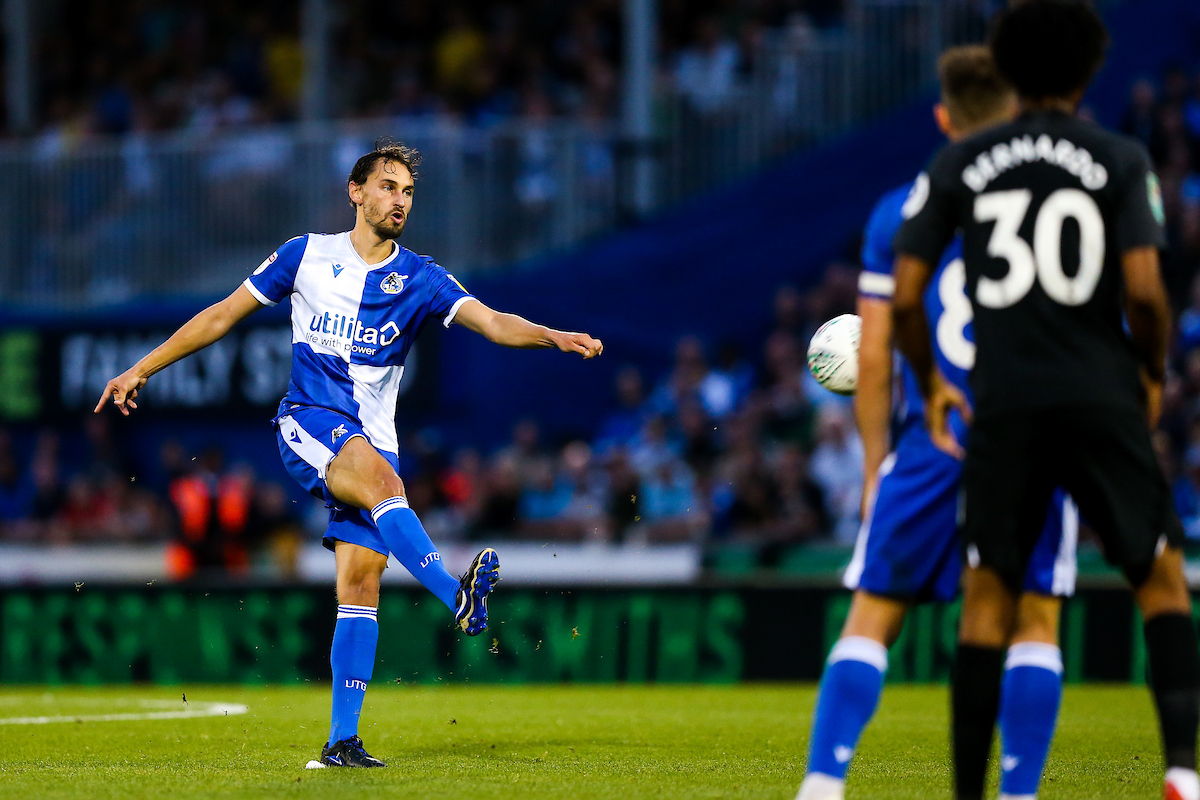 Brighton’s side was not their strongest but was still littered with familiar names and internationals. Occasionally Premier League sides get criticized in these competitions for ‘playing the kids’. People forget that most top-flight sides now have 25-man squads with precious little that could be classified as filler.

Graham Coughlan used the fixture to rotate his strikers, bringing Tom Nichols and Victor Adeboyejo into the starting 11, and beginning with Jonson Clarke-Harris and Tyler Smith on the bench.

The rest of the starting line-up from Saturday’s come-from-behind win over Oxford United remained, with particular interest on the burgeoning back three for the Gas. Alfie Kilgour, who has done his reputation no harm whatsoever with his appearances this season, would be lining up against Glenn Murray, vastly experienced, and a dictionary definition of the word ‘handful’.

In the end, Brighton played with Aaron Connolly as their most central striker, with Murray playing more from the left of him, so it would be Tom Davies in direct completion, while Kilgour would typically be up against livewire Iranian Alireza Jahanbakhsh.

It was Connolly who had the first potshot on goal, maneuvring in the box to make his own space, then curling not far over the bar.

Eight minutes into the game, there was a minor concern over a Rovers player, who took a ball full in the face from close range. One wonders if the shout came…”’Ed Up, Son”.

Just after the quarter-hour mark, Brighton showed their Premier League credentials for the first time. Wing-back Steven Alzate linked well with the roving Jahanbakhsh on the right flank and soon shifted the ball across to the opposite wing-back, Bernardo de Silva. The latter’s shot was pushed out by Anssi Jaakkola, but straight to the feet of Murray, who converted…only to glance to his right and see a raised flag for offside. “VAR, VAR, VAR…” chanted the large contingent of Brighton fans taking up the South Stand. We are happy with our new big screen, Seagulls, but this is The Mem. Cool kit launch videos we can do, but VAR is not quite our responsibility yet.

Midway through the first half, and in truth there was not much to separate Pirates and Seagulls -let’s face it, both of them would nick your chips – but Rovers nearly gifted a goal to their visitors. Jaakkola did not deal well with a floated cross, and as the ball fell loose, Tom Davies made a stoical block to deny Bernardo.

Rovers were not meekly bowing to their lofty visitors, though, and after some hassling and harrying from the front two, Ollie Clarke fired in a snapshot that was blocked, and so nearly fell to Abu Ogogo, who was denied by a superb recovery challenge by Alzate.

Then, from Tom Nichols’ well-guided pass to the right flank, Josh Hare whipped in a cross which Adeboyejo was perfectly positioned to convert, only to be denied by a brilliant intervention by Adam Webster.

Both sides were alive, if not creating clear cut efforts. A Brighton free-kick in a dangerous area was floated too far for Gaetan Bong to convert, while at the other end Adeboyejo hustled to have a shot deflected wide, then his attempt to score from the corner ended in the ball going over.

Brighton had a spell of dominance, in terms of possession and territory, as the first half drew to a close, but only had a long-range effort from Gross to show for it, and even then Jaakkola watched it trickle wide. Meanwhile, as the fourth’s board signaled a single minute, Nichols’ burst in behind was only countered by a smart bit of covering by Leon Balogun.

The first chance in the second half went to Brighton, as the broke away from a Rovers attacking free-kick. Bernardo burst down the left but was covered by Hare. Mooy, for whom a covering of hair is not a problem, dropped a shoulder and fired in a shot that Jaakkola did superbly well to save at the near post.

Shortly, afterwards, a cross from deep by Bong looked perfectly set for Connolly, but a well-timed, crucial intervention by Tony Craig diverted the ball beyond the Brighton striker’s despairing reach.

His despair did not last long. Jahanbakhsh robbed the ball from Kilgour and headed for goal. The Iranian’s shot was heavily deflected, but fell to Connolly, in space, and he finished beneath Jaakkola to give Brighton the lead.

Rovers looked to answer immediately, and were awarded a free-kick in such a position that it was essentially a corner. A long delivery reached Kilgour, who drove a ball across the face of goal that david Button in the Brighton goal had to get down swiftly to push away. As Rovers looked to follow up, the Seagull’s goalie came for a high ball, flapped, but was awarded a free-kick. The home players felt they had not sufficiently pushed the Button, but the Gas were galvanised.

Moments later, Upson attempted to do the unthinkable – top the goal he scored on Saturday. He did all the hard work. He beat a man on the edge of the area, flicked the ball from his right foot to left, then dummy to shoot and charge into the area. All that was missing was the finish – he could only shoot low and straight at Button.

Just after the hour mark, Coughlan sent on Clarke-Harris for Adeboyejo. The substitute’s first touch was to nod down to Agogo, who helped the ball on to Nichols. The number 10 eased his man away from the ball, and after the ball looked like it would not sit for him, it suddenly fell perfectly, and his volley past Button was that of a player suddenly buoyed by a goal on the weekend. 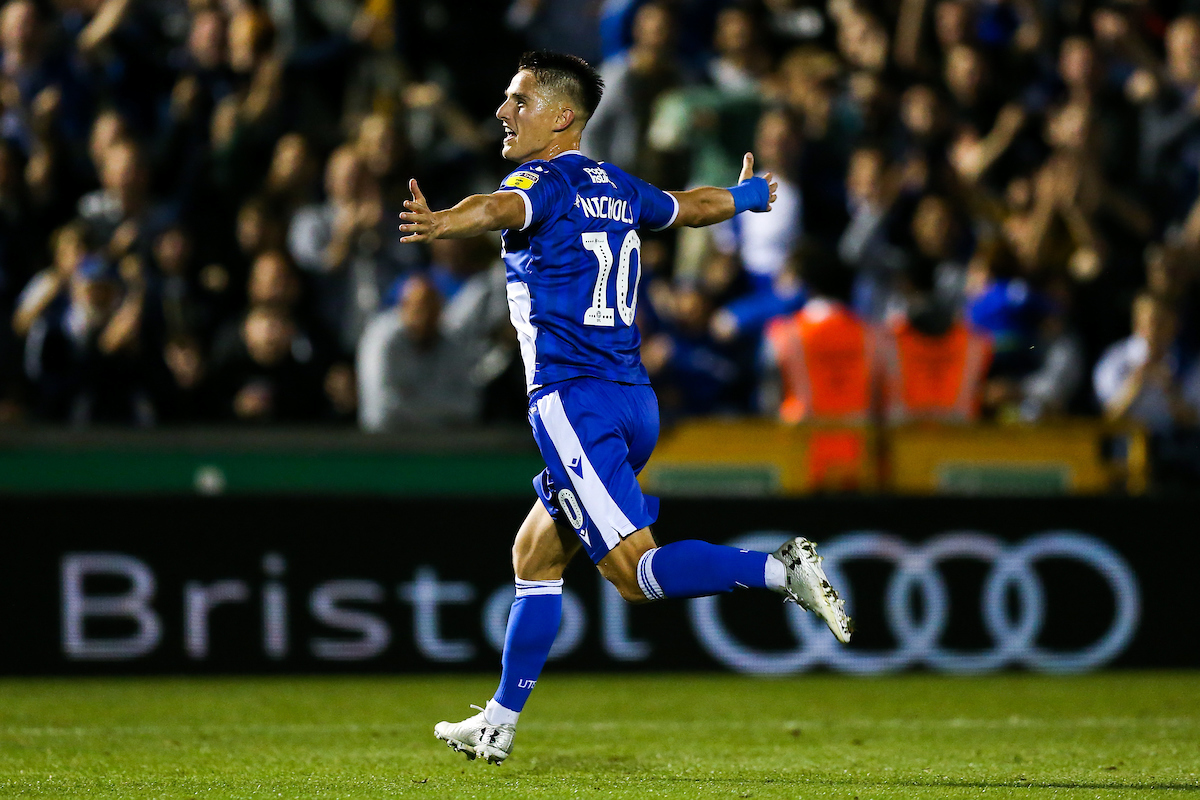 Suddenly, The Mem was alive, and Rovers sensed a chance against their divisionally superior challengers. Davies looked as classy a defender as there was on the pitch, be it usually League One or Prem, as he stepped out of defence past snapping Seagulls and fizzed a glorious diagonal pass to Leahy. The latter’s cross was only just picked off before getting to Clarke-Harris.

Coughlan fancied victory, too. His next change was an attacking on, as he sent on Tyler Smith for Ollie Clarke, asking Nichols to retreat a little into midfield. Brighton, though had the next chance, but from a similar position to where he scored from, this time Connolly was denied not once but twice by Jaakkola.

Nichols, looking to be suffering from cramp, was replaced by Alex Rodman with a little over ten minutes to go.

Shortly afterwards, Brighton won a corner, and for a fleeting nanosecond it looked as though it would lead to an ignominious winner as far as Gasheads were concerned, as Webster, the former Bristol City man, rose highest and powered a header at goal, but Jaakkola was equal and saved with his legs.

It was defend-for-your-life time. Every Rovers clearance just found a black Brighton jersey; suddenly there seemed to be about 18 of them. However, the defensive unit was standing firm. Murray was the first to wriggle into space, but Jaakkola was equal once again.

It was not all one-way, though. Rovers won a free-kick, and it took Brighton a very long time to clear, as the Gas kept up the pressure. Upson did a brilliant job of getting the ball and forcing his way to the bye-line, cut the ball back, but Potter’s men conjured clear.

The board went up for three additional minutes, but as Gasheads’ thoughts were turning to working out the five penalty takers, Murray struck. Virtually anonymous throughout, you do not become a prolific striker through your life without having an impact. Brighton broke swiftly, and worked the ball down their left. Bernardo, to Alzate, turning up on the other flank, then a squared ball to Murray, lurking in space. The finish was as facile as it gets.

Rover launched one final flurry, with Hare winning a free-kick on the right, which Jaakkola advanced for, but as Brighton scrambled away for a final time, the final whistle blew.

If post-scripts to matches mean anything, the fact that the reaction from Gasheads in the crowd was overwhelmingly positive. Rovers had mixed it with a Premier League squad, and a deciding shoot-out was tantalisingly close.

Cup chances, gone for a Burton. But a trip to Britain’s brewing capital will see Gasheads with glasses at least three-quarters full.