A point on the road at Fleetwood is enough for Rovers to secure their Sky Bet League One status.

Rovers battled hard in tricky conditions to take home a point from Highbury, which was enough to extend the cushion between themselves and the bottom-four to four points, ahead of the final round of fixtures next weekend.

In the fairly level first-half, a fine double stop from Jack Bonham kept the scores balanced, as the Rovers goalkeeper denied Ashley Hunter and Ched Evans inside the opening five minutes.

Rovers created credible first-half opportunities through Liam Sercombe and Ed Upson, as the scores remained level at the halfway stage.

Both sides struck the post in the second half, as Madden went close for the home side and Ollie Clarke narrowly missing out on what would have been another fine left-footed goal.

With Plymouth and Scunthorpe losing, the point proved to be enough to ensure Rovers will be playing Sky Bet League One football next season, ahead of hosting promotion chasing Barnsley at the Mem next Saturday.

Naming his side for the encounter, Rovers Manager Graham Coughlan opted to make two changes to the side that started Monday's defeat to Rochdale.

Into the line-up came Joe Partington and Abu Ogogo, with Tom Nichols and Alex Rodman missing out, starting the game on the bench.

In the cold and blustery conditions on the north coast, it was the home side that registered the first chance of the contest. Ashley Hunter tested Bonham with a drilled effort from inside the area that the Rovers goalkeeper did well to push away. Bonham managed to stay alert to make a fine reaction save from the rebounded effort from Ched Evans, that was struck rapidly from just yards out.

Rovers did settle into the encounter and created an early chance of their own. Patient play in the final third carved a run for Liam Sercombe to dart into the box, with the midfielder striking an effort towards the near post that required a stop from Cairns to touch the shot wide.

The chance from Sercombe was quickly followed by an opportune volley from Ogogo that was struck from 20 yards out, with the attempt just flashing wide of the target, but Cairns was concerned by the strike.

Coughlan's side showed good composure on the ball, looking eager to thread a string of passes together to construct ways through the Fleetwood back four. Ed Upson had an opportunity land at his feet, as a cross from James Clarke fell into his path, but his first-time effort sailed over the target, in what was a good showing of build up play by Rovers.

As the half-hour mark passed, Homes-Dennis was robbed of possession inside the Rovers half, gifting the opportunity for Ross Wallace to flight a cross into the penalty area. Wallace's delivery was met by Ched Evans, who glanced a header wide of the target. Moments later Hunter drifted a left-footed shot from range well wide of the Rovers goal.

At the other end, Holmes-Dennis charged down a clearance and managed to control the ball to progress on a run into the Fleetwood area. The defender did well to beat off numerous tackles but opted to square a pass across the face of goal intended for Clarke-Harris, but the Fleetwood defence rushed away the delivery.

In the last moments of the first half, Ed Upson looked to take advantage of the conditions and aimed a long-range effort to catch Cairns off his line, as the shot from just inside the Fleetwood half curled just wide of goal. 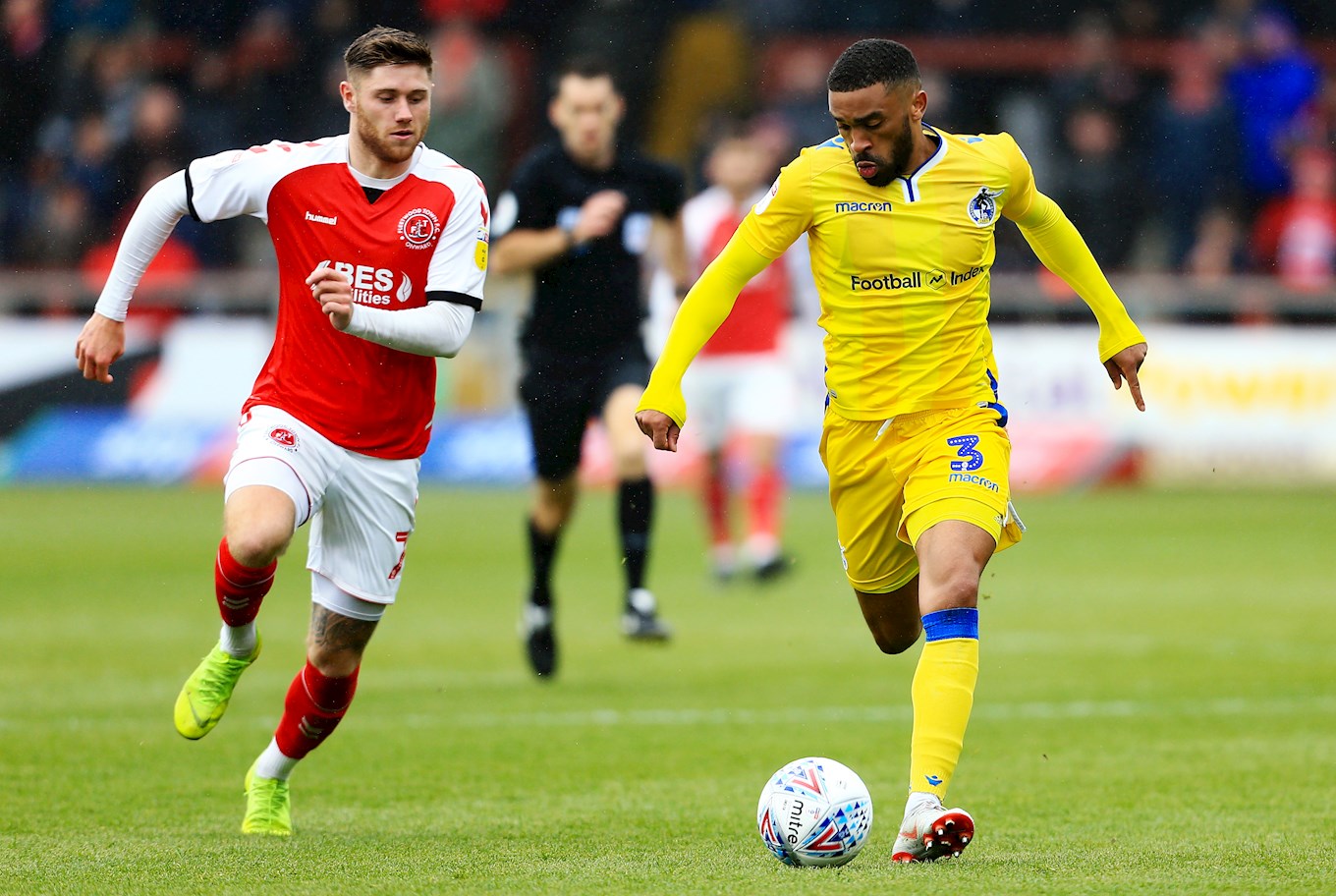 Rovers started the second half brightly, as Ollie Clarke cushioned a pass to set Tareiq Holmes-Dennis towards the final third, as left-back was able to win a corner. From the resulting set-piece, Cairns grabbed the ball just ahead of Tom Lockyer, who made a rushed run to the near post to attack the cross.

Chances were few and far between in what was quiet spell as the content edged towards the hour mark. Ollie Clarke saw an effort from range rise over the target in front of the contingent of Rovers fans, as Tony Craig made a vital interception to prevent a low cross into the Rovers area from finding a red shirt.

On the break, Rovers assembled an opportunity a Liam Sercombe's cross dropped to Ollie Clarke, with the midfielder arriving at the ball with pace, but mistimed his volley from the edge of the area.

As the game entered the final twenty minutes, substitute Madden zipped a volley from just outside the area narrowly overt the crossbar and minutes later, the striker hit the upright with a low effort after jinxing his way into the Rovers penalty area.

Rovers struck the post shortly after, as a left-footed strike from Ollie Clarke bounced back off the inside of the post, with Cairns beaten. The rebound swung just out of reach of Ogogo, who made a follow-up run into the Fleetwood box.

In the closing stages, Bonham had to show alertness to tip wide an effort from Evans that curled through the air.

Late substitute Alex Jakubiak tested Cairnes low down to his right with an excellent stinging drive from range, in the last of the action as Rovers secured their safety. 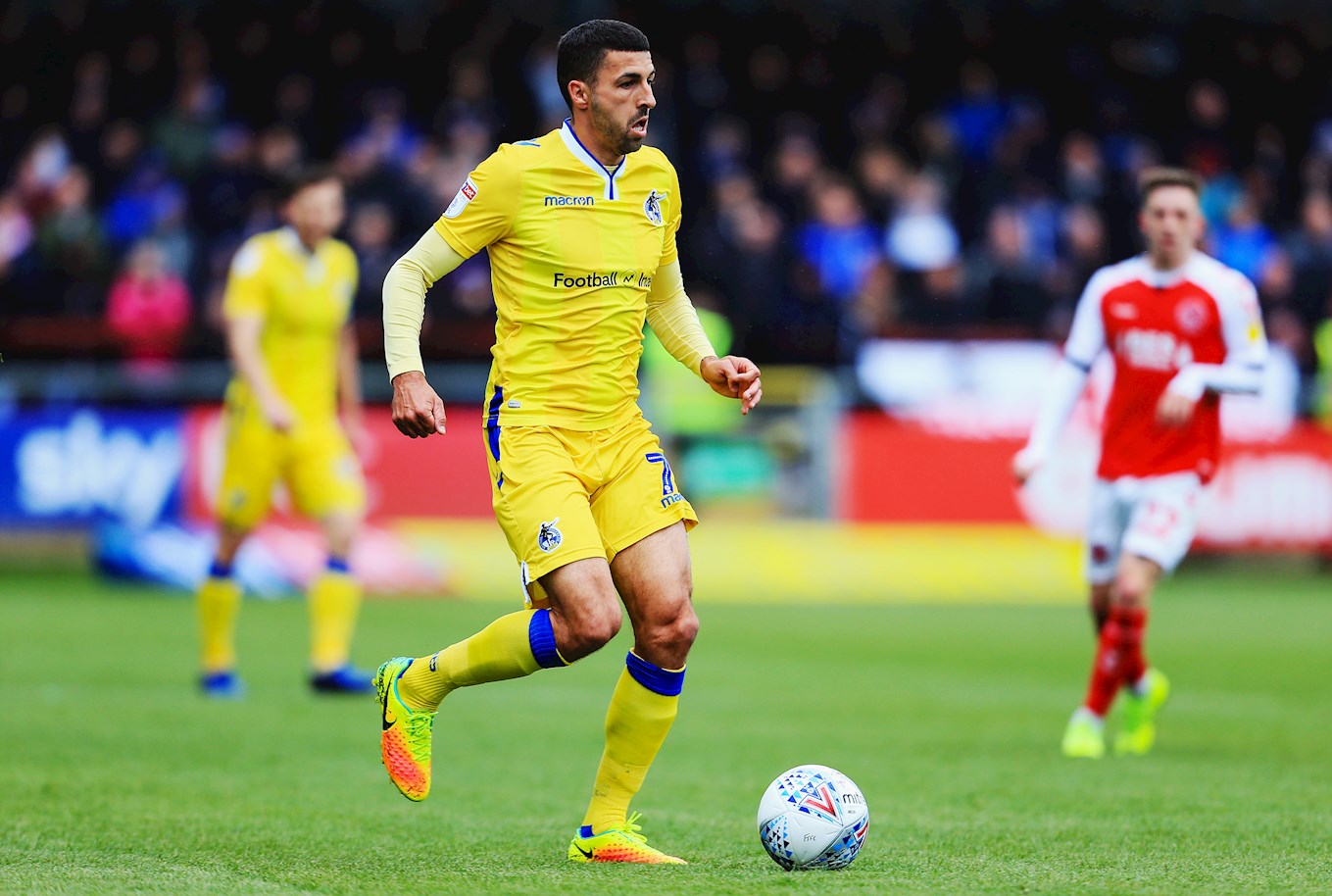