Traditional West County rivals Bristol Rovers and Plymouth Argyle face off against one another in an early kick-off on Saturday.

Last season Argyle had a terrible first half to the season and a spectacularly good second-half. Despite having beaten our city rivals in the Carabao Cup the Devon team have accumulated just two points from their six games. This poor run of form included a 5-1 home thrashing by Peterborough.

Last weekend as Rovers were drawing 1-1 at Shrewsbury, the Pilgrims went down to a 3-0 loss at Portsmouth. Argyle lined up in a 4-1-4-1 formation and were under early pressure as on-loan goalkeeper Matt Macey did well to punch clear an inswinging free-kick from Gareth Evans. Moments later, Evans unleashed a fierce rising shot which was tipped over the crossbar by Macey.

Ronan Curtis put the home side ahead in the 22nd minute when he was played in by Jamal Lowe before slotting his effort past Argyle goalkeeper Matt Macey. It was unselfish play from Lowe, who could have chosen to shoot but spotted Curtis was positioned better.

Fratton Park was rocking and so was the Argyle defence as striker Oli Hawkins almost made it 2-0 shortly before the half-hour mark. Evans played the ball outside to Hawkins, who cut back inside and aimed a shot for the far corner of the net, only for Macey to push it wide for a corner.

There was a double Argyle substitution at the start of the second half as Graham Carey and Ruben Lameiras replaced Conor Grant and Yann Songo’o.

Portsmouth also used their final two permitted substitutes with defenders Christian Burgess and Nathan Thompson sent on for Anton Walkes and Jack Whatmough. Argyle changed to a 4-3-3 formation with Carey and Lameiras either side of Freddie Ladapo.

Lowe doubled Pompey's lead early on in the second half after getting on the end of an exquisite cross from ex-Gas Lee Brown to nod the ball home in the 63rd minute.

It was far too easy for the hosts as Joe Riley failed to close down Brown and Lowe beat Ashley Smith-Brown to the ball.

Portsmouth went further ahead in the 69th minute with a second goal of the game from Curtis and it was gifted to him by Argyle. Carey carelessly gave away the ball and Curtis brushed past the challenge of Sawyer before firing high into the net. Curtis finished the rout six minutes later by shrugging off Gary Sawyer before beating Macey with a lethal strike from a narrowing angle.

Controversial Argyle Boss earned himself the nick-name of ‘the poor man’s Jose Mourinho’ from Pompey fans with his post match comments, “The game changed in the first half with a refereeing decision,” said Adams, “It was a stonewall penalty on Freddie Ladapo, and there were two other claims in the first half. If they are given then it is a different ball game away from home. The advantage then went to Portsmouth and they got the goals after that.

Like Rovers, Argyle were founder members of the Third Division in 1920-21 season. They finished one spot below Rovers at the end of that season in 11th place. The first ever League meeting between the clubs took place on 23rd April 1921 when goals by Ellis Crompton and Billy Palmer secured a 2-0 victory in front of a 14,000 Eastville crowd. The return match saw Plymouth win 2-1 a week later, Crompton scoring for Rovers again and Jimmy Logan notching two for Argyle. It was the first of 10 games in which Argyle remained undefeated against Rovers.

Looking back over the history of games there have been some real high scoring encounters. The Boxing Day fixture of 1973 kept a 22,353 crowd on their toes as goals by Stuart Taylor, Alan Warboys (2) and Bruce Bannister swept a rampant Rovers to a 4-2 win. 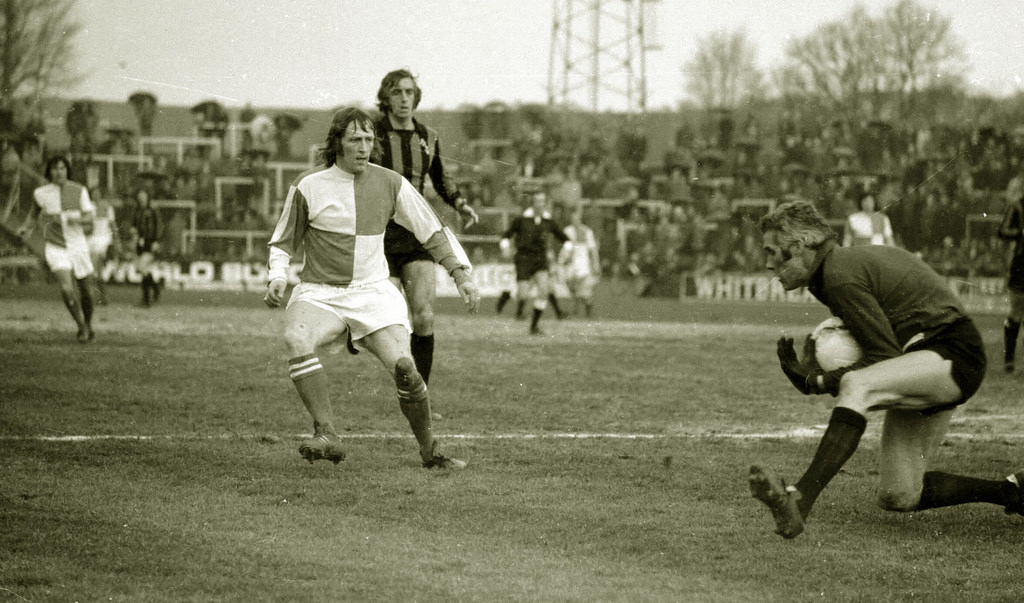 Going back even further to 14th October 1961 a Bobby Jones double, Geoff Bradford and Peter Hooper goals made the score 4-3 to Rovers. This provided some sort of revenge for Argyle’s 5-2 win, just 11 months prior.

It’s also worth remembering that “Goodnight Irene” was first heard on 4 November 1950 in a game between Rovers and Argyle. Rovers came back from being 1-0 down at half time to score 3 goals. The Rovers fans changed the words of the current hit by the Weavers to ‘Goodnight Argyle”

On 8 March 2014 a 7,799 crowd saw Rovers run out 2-1 victors. It only took the home side 6 minutes to find the back of the net through loan striker Chris Beardsley. Michael Smith delivered a long flat throw into the Argyle penalty area to Kaid Mohamed at the near post. Mohamed flicked the ball across the 6-yard box to find an unmarked Beardsley who nodded in from close range.

The home side were made to pay for their missed chances as just before half time Plymouth drew level. A Luke Young free kick was palmed wide by Mildenhall but only to the head of Maxime Blanchard. Blanchard headed the ball back across the Rovers 6-yard box and Neal Trotman jumped highest to make it 1-1.

Rovers looked the more likely to break the deadlock and did on the 79th minute through the head of Kaid Mohamed. Further pressure from down the Rovers left allowed Lee Brown to deliver a pinpoint ball to the far post and an unmarked Mohamed restored Rovers advantage.

Prior to that game The Mem had been a happy hunting ground for the Pilgrims; they had collected maximum points in the previous three League encounters, the last two of which had seen the Devon team record 3-2 wins. In 2015-16 both fixtures ended up 1-1.

Last season Rovers won an ill-tempered game 2-1; the hosts took the lead when Ellis Harrison's low cross from the right found Rory Gaffney in space inside the box and the striker fired home from 12 yards.

Argyle started the second half well and equalised when former Gas striker Nathan Blissett found the top corner with a well-taken right-foot shot from an angle. But Billy Bodin hit the winner when he met Gaffney's low cross from the left and his fierce first-time shot with his left foot gave Kyle Letheren no chance.

Argyle were reduced to 10 men two minutes later when Gary Miller was shown a straight red card for a foul on Joe Partington.

Argyle defender and former Rovers player, Gary Sawyer is ready and willing to continue playing in central defence for Plymouth Argyle if manager Derek Adams wants him to. The 33-year-old club captain has spent much of his career at left-back, both in his two spells with the Pilgrims but also elsewhere.