Rovers went unbeaten in three games following their stalemate with Bradford City at the Northern Commecials Stadium on Saturday afternoon.

The best chances for the Gas fell to Tom Nichols and Stuart Sinclair in the first half, with the former striking the post before the latter scuffed a prize chance inside the box later on.

The visitors had a lot of defending to do, notably when Tom Lockyer was almost caught out by George Miller inside the first 45 minutes with a mishit clearance - the skipper would also be withdrawn from the game shortly after for a head injury.

The second half was backs to walls stuff for Rovers, who thankfully managed to hold firm amidst a barrage of pressure from City, led predominantly by winger Sean Scannell.

Ahead of the encounter, Darrell Clarke made just two changes to the winning side that hosted Coventry City last weekend. 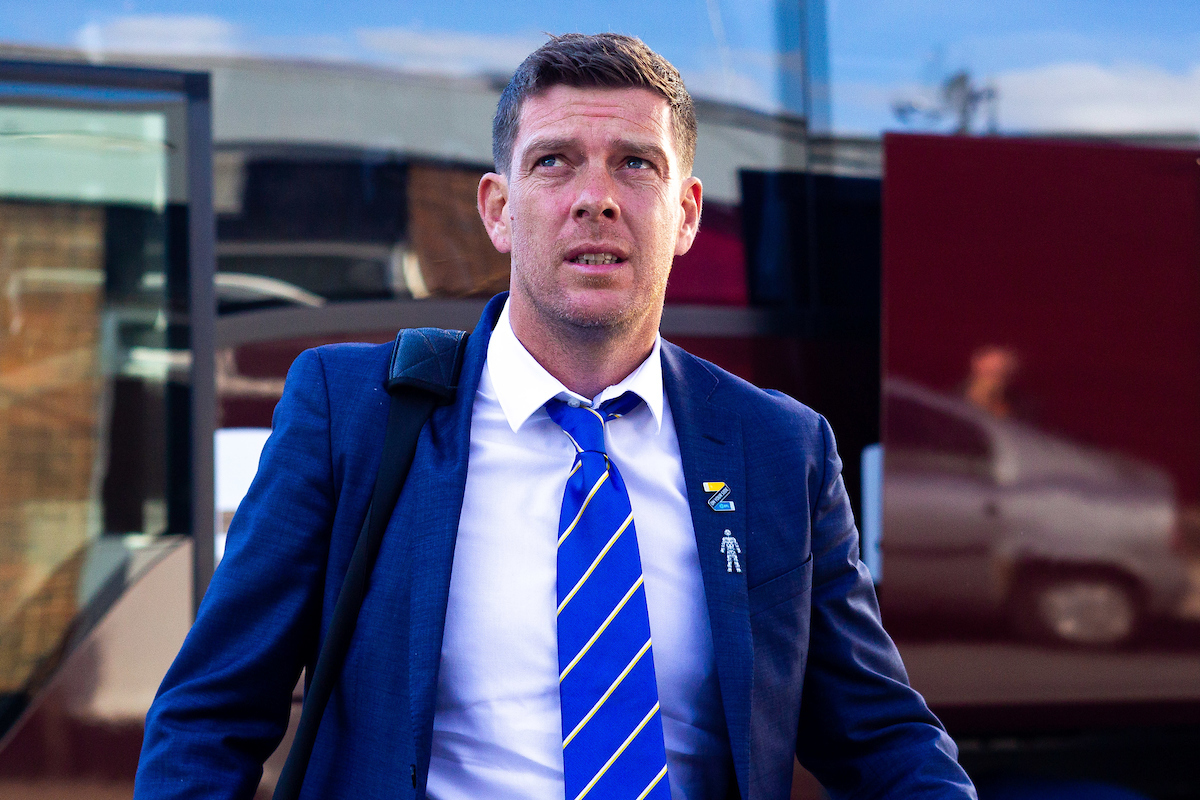 Joe Partington made his first start since fracturing his ankle away at Fleetwood in April and Ed Upson was recalled to the starting line-up.

Both sides struggled to get a foot on the ball within the opening five minutes, with the only event of note being a Sinclair shot from range deflecting behind for the game's first corner.

However, Rovers went close as a result of the set-piece, with the original corner cleared but returned into the area to Nichols, whose snap-shot from about 12-yards out bounced back off the post!

Michael Kelly had kept his place down the left following some solid performances in recent weeks and showed what we could offer going forward, as he teased a sumptuous ball in towards Nichols and Gavin Reilly that both were just a couple inches shy of reaching.

The latter then had another decent chance a few moments later, peeling off at the back post to get his head to Ed Upson's deep corner but the striker was on the stretch and couldn't get over the ball.

The following 15 minutes that followed were forgettable to say the least, but straight after that quarter of an hour, Lockyer was saved a red face by the upright.

The skipper stepped forward to sweep away a loose ball just inside his half, but he miscued his clearance and allowed Miller in, who still had to work to do but managed to carry the ball all the way into the area and beat Jack Bonham with a scuffed effort which bobbled off the surface and thankfully ricocheted off the post. 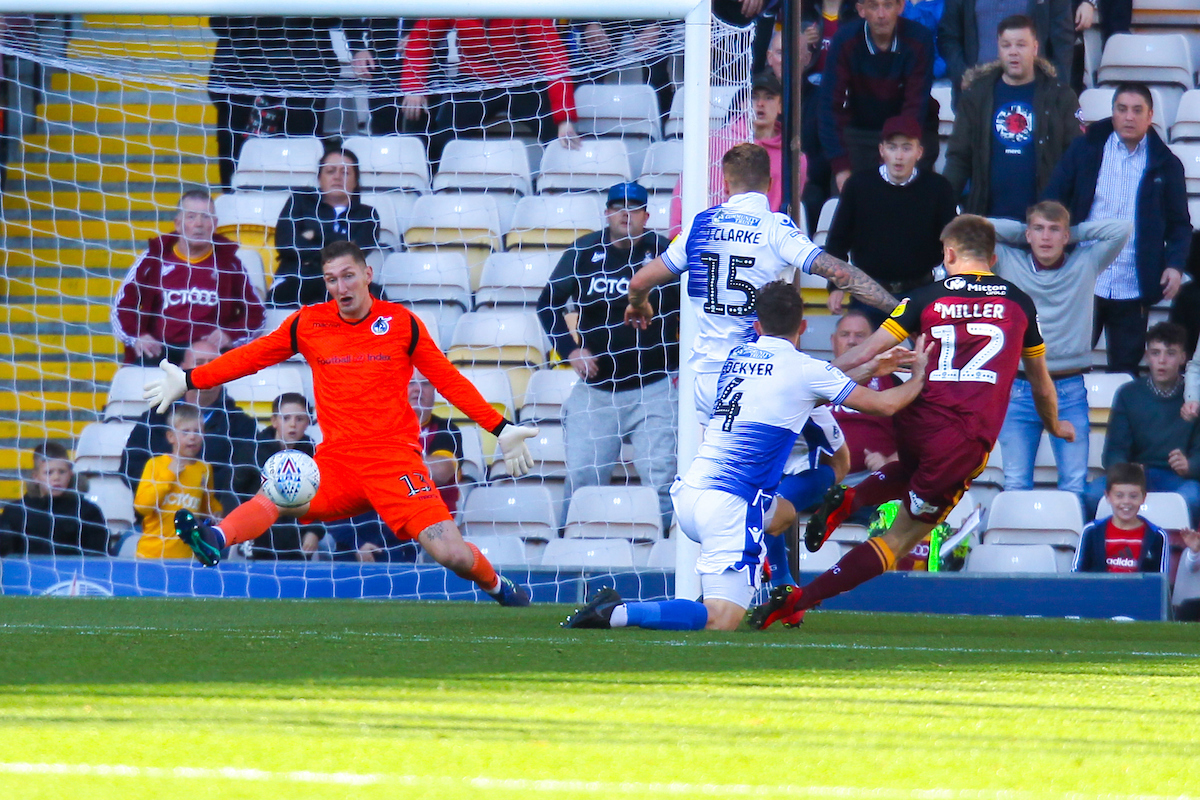 Lockyer was in the thick of it once more just a few minutes later, as he was involved in a nasty clash of heads with the man he'd almost allowed in on goal just shortly before, Miller, but both thankfully returned to their feet following some treatment.

Despite continuing following the initial clash, it became clear Rovers' captain could not continue and as such was replaced by Tom Broadbent with just under 10 minutes of the first half remaining - O.Clarke took the armband for the remainder of the contest.

A stretcher had initially been brought out for the Welsh international but thankfully he could return to his feet and exit the pitch. 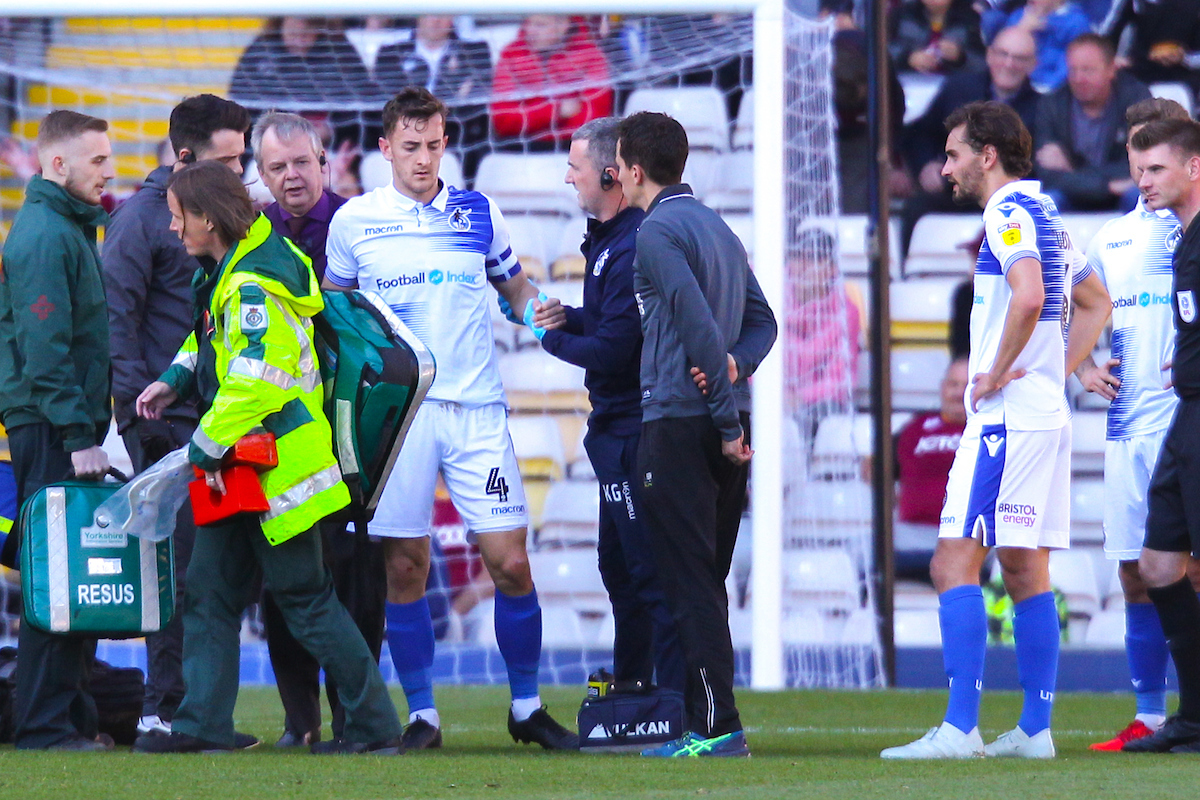 Seconds after the change, Rovers had arguably their best chance of the half, as Partington got free down the right and demonstrated great awareness to cut the ball back nicely for Sinclair who was 10-yards out from goal, but sadly the midfielder scuffed his strike wide!

Buoyed by his spectacular strike against Coventry City last weekend, O.Clarke picked up the ball 30-yards out, faked a shot to allow more space before unleashing a powerful effort towards goal that demanded a strong fist away from the City stopper.

Three minutes or so into the half's five additional minutes, Kelly had the traveling Rovers fans on their feet and on the cusp of celebration, with the young full back firing a wicked ball across goal and narrowly past the far post! 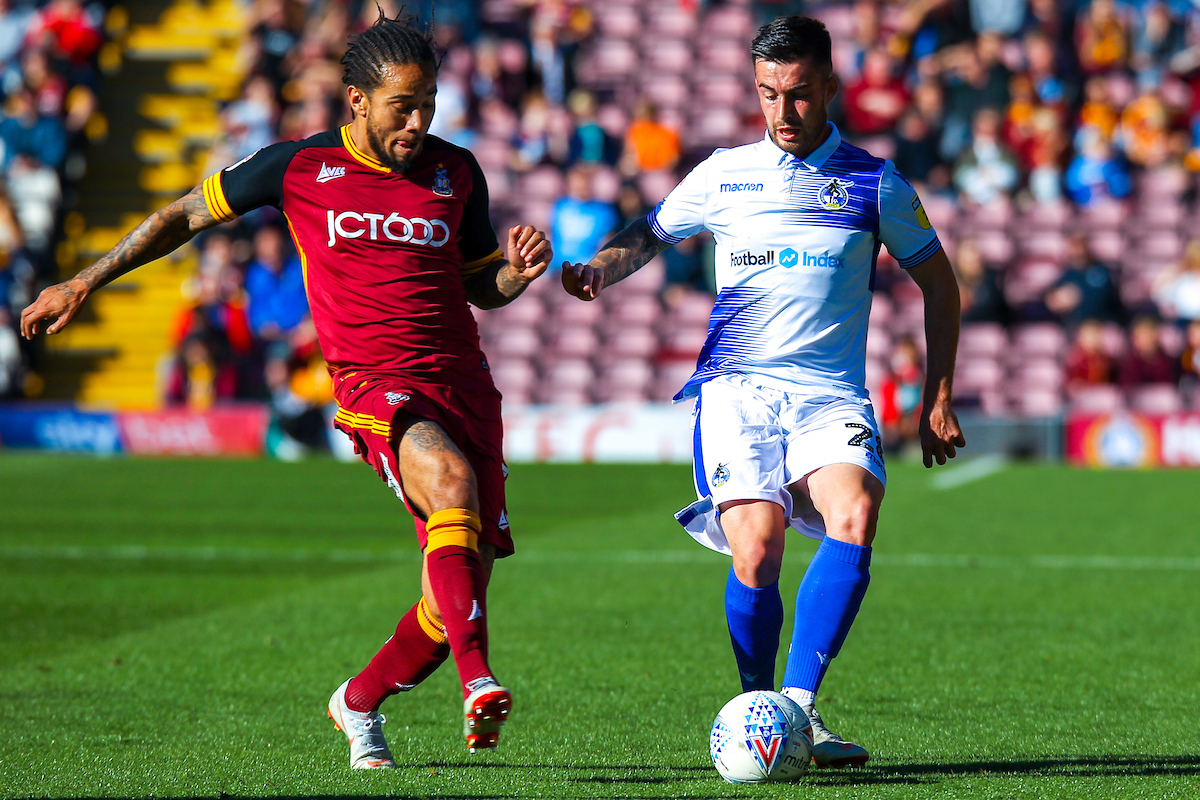 Three minutes into the second half and the hosts almost took the lead as Scannell clipped a nice ball into the box to Miller who volleyed first time, just a whisker past the left post!

Inside the first 15 minutes of the second 45, The Bantams had the lion share of possession and progress in the final third, with Rovers limited to long balls forward for Nichols and Reilly to fruitlessly chase.

The half at this point certainly belonged to Bradford and they somehow couldn't break the deadlock on 64 minutes, when Scannell went through on goal, hit the post from close range with the ball falling to Jack Payne, whose shot was superbly blocked on the line by Tony Craig!

Despite buying themselves 10 minutes or so of breathing space up the pitch, Rovers went back under the cosh when Kelly lost his footing, allowing Scannell to profit down the right and pick out Lewis O'Brien, who very nearly controlled and got a shot away inside the area.

Moments later the same man had the ball in the back of net, sweeping home from 10-yards, but was correctly flagged offside by the linesman.

Scannell continued to cause problems down the right flank and got beyond Kelly who consequently clipped his heels and conceded a free kick - it was whipped in by Payne but beaten away confidently by Bonham.

With 10 minutes left, Liam Sercombe made his return from injury to a relieve a man who had done so as well - a solid 80 minutes from Partington. 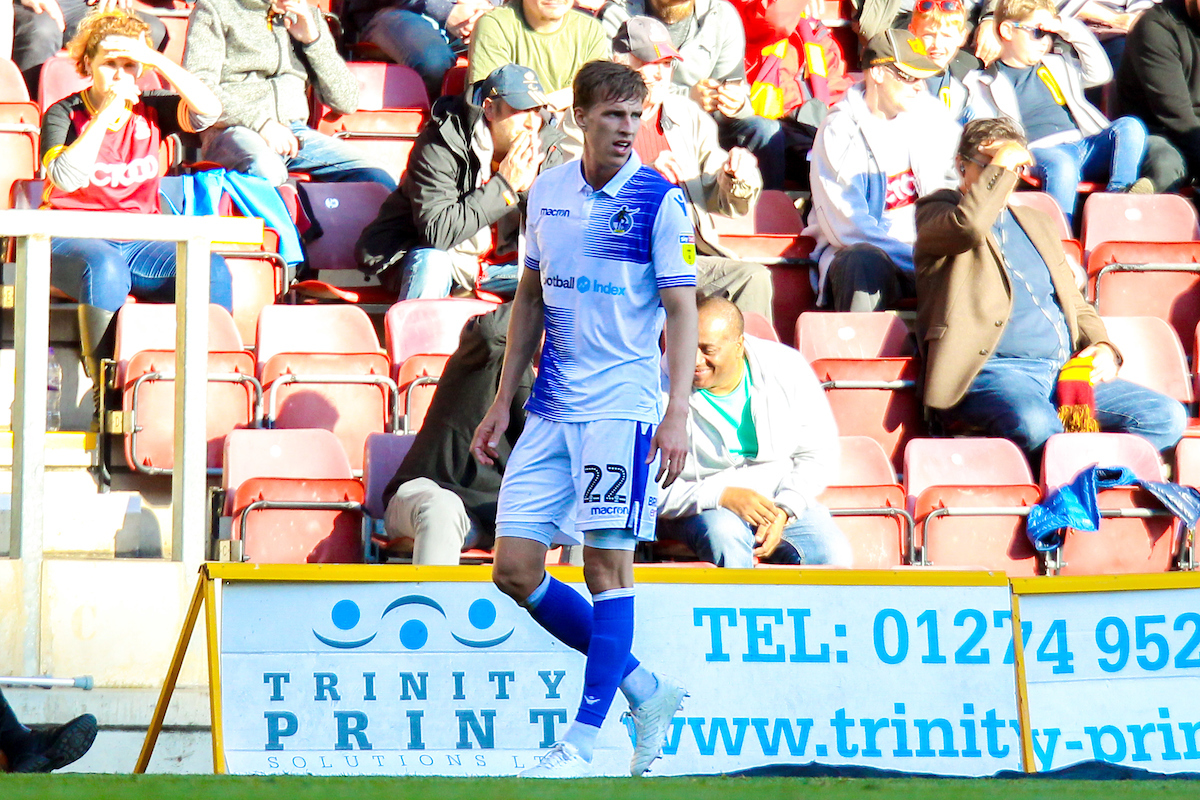 The midfielder got straight into the action, as Rovers and Nichols countered rapidly down the right following a free kick, the forward found the onrushing James Clarke, who then fed Sercombe - his shot deflected behind for a corner.

Sercombe had another chance following the set-piece, striking from a similar position and seeing his effort deflect once more, however this time the ball so nearly wormed its way beyond the keeper!

Scannell again was at the forefront of Bradford's attack, cutting inside down the right and forces a stop from Bonham followed by an important clearance away by Craig.

As we entered stoppage time, Alex Jakubiak was introduced at the expense of Nichols and didn't take long to get involved, testing O'Donnell low to his right with a decent strike just inside the area.

Not much followed that chance from Jakubiak, as the game met its conclusion and both sides left with a point a piece. 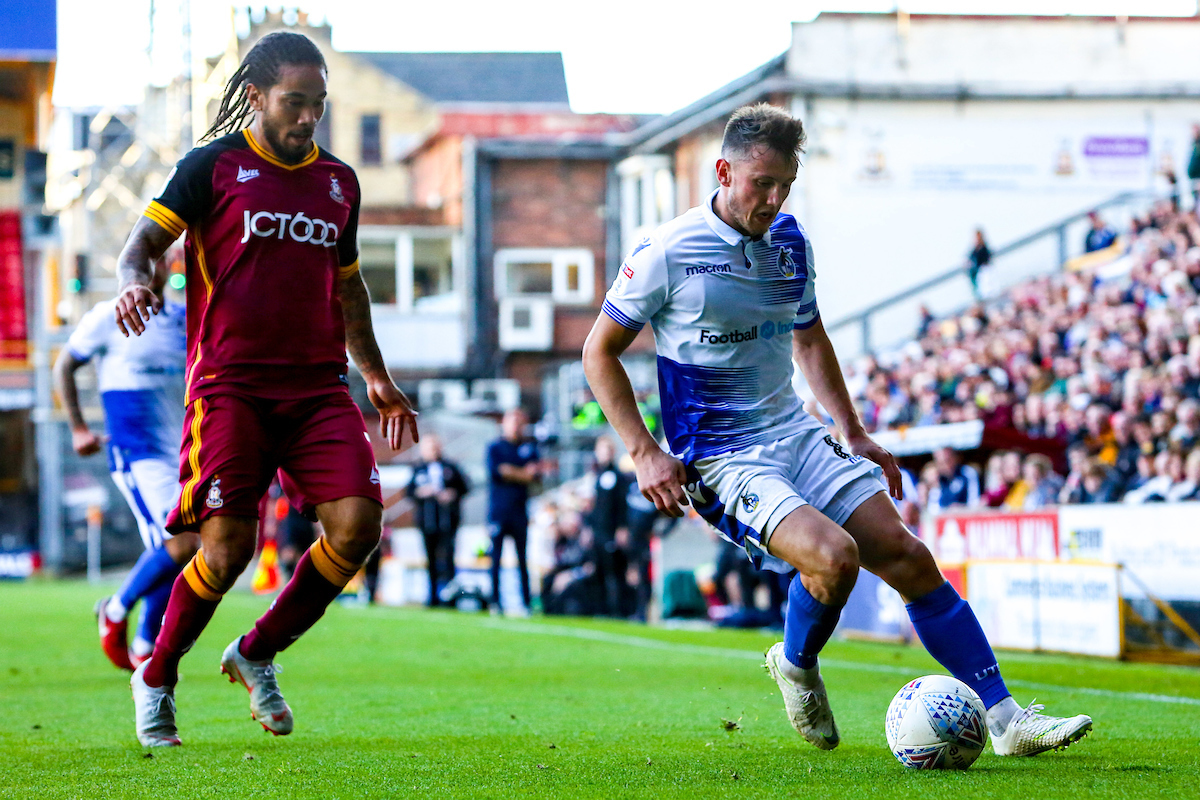