After two long distance away trips yielded two 0-0 draws Darrell Clarke will be looking for his Bristol Rovers team to build on that firm foundation when they entertain Walsall this weekend. The defensive solidity was something that had concerned the Rovers’ boss in the early stages of the season, with that now looking in place the focus will change to converting the high number of shots on goal to goals.

After 7 games when Rovers were in 21st spot the ‘wherethesmokegoes.wordpress.com’ website had this to say about their statistical analysis of Rovers, “A poor start results-wise, but actually Bristol Rovers have been playing to a good level and, all things being fair, they’re in line with expectations so far when looking at performances. If they keep it up they should be OK and hopes of a top half finish shouldn’t be extinguished yet as long as they start getting points on the board sooner rather than later.”

Interestingly their comments on 5th places Walsall were, “The surprise package of the division. Walsall have picked up nearly double the amount of points they were expected to, though they have been slightly fortunate to get as many points as they have based on their performances. That said, they’ve performed better than expectations and given their initial target of just retaining their place in the division, they can aim much higher than that if they keep up the current standards.”

Since then Rovers have climbed to 18th with a win and 2 draws and Walsall dropped to 7th with 1 win, 1 draw and 1 defeat. The latest of those games was a 0-0 draw (does that sound familiar?) at home to Shrewsbury on Tuesday night.

Coleman thwarted another Ismail strike after 15 minutes and Josh Ginnelly miscued the rebound wastefully wide and Ollie Norburn then went close from distance for Shrewsbury, forcing Roberts into another fine low save.

Walsall had two golden chances to go ahead around the half-hour but Ginnelly's shot was blocked on the line by Anthony Grant, and Morgan Ferrier headed Luke Leahy's cross wide when unmarked 10 yards out. Shrewsbury were again grateful for a goal-line clearance early in the second half, with Luke Waterfall denying Walsall's George Dobson.

Walsall came on strong late on as Ginnelly flashed a drive inches over and Coleman saved well from Ferrier, but Shrewsbury almost won it at the death, Walsall keeper Roberts denying Norburn from point-blank range.

Saddler’s Manager Dean Keates was perplexed by the eventual scoreline, “I have no idea how the game stayed goalless. We’ve created chances but we need to be more ruthless, although, yet again, their keeper has pulled a few decent saves off.

“It’s fine margins and we are just falling short at the minute but it needs addressing. Liam made two decent saves from distance, we kept them to efforts from distance. We need to look at ourselves, we should have put them to the sword, we should have taken our chances. It’s frustrating. We will take the clean sheet out of it but, for us, it’s two points dropped.”

“I wouldn’t say I’m worried, it’s a concern at the moment,” he continued, “It’s still very early days and there are bits and pieces we need to work on. We had opportunities to get decent balls into the box and we’ve made the wrong decisions. It’s something that needs addressing over the next few weeks.”

In total Rovers and Walsall have met 100 times, with the Gas having won 40 games, the Saddlers 38 and 22 draws. So, lots of games and a very close record, with Rovers just shading it. During that time there have been some remarkable sequences of games.

Going right back to the first game, which Rovers won 5-2 on 27 August 1927 in the Division Three (South), there was an all winning sequence for the Pirates of 6 games. That sequence was broken by a 0-0 draw on 30 April 1930 at Fellows Park. The Saddlers won 3 of the next 4 games. 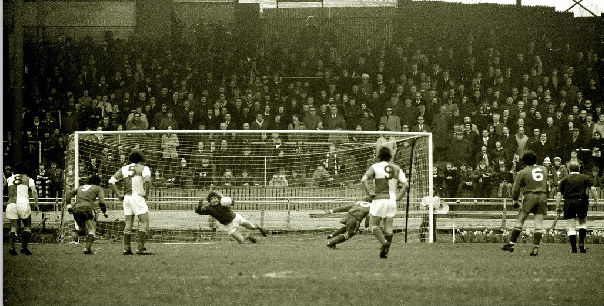 Caption: Walsall’s Alan Buckley sees his penalty saved by Jim Eadie in front of the Tote End at Eastville watched on by Tommy Stanton, Stuart Taylor and Alan Warboys.

During that same spell Rovers suffered an amazing reverse when they were leading 3-1 with 15 minutes to go, on 19th March 1973. A bomb scare caused the game to be halted. Then in the remaining 15 minutes Walsall scored 3 times to win the game 4-3!

Rovers’ longest unbeaten streak was at Eastville between 4th September 1948 and 2nd November 1963, a total of 7 games with 4 Rovers wins and 3 draws. The game that broke that sequence was on16th March 1965. Walsall won 1-0 and the newspaper report of the goal revealed that "Harassed by lanky Alan Clarke, Rovers keeper Bernard Hall lost possession after being lured yards from his goal. The ball rolled to Jimmy McMorran who chipped it back into an empty net from 25 yards".

Rovers gained their revenge just over 6 months later. Manager Bert Tann had complained that the team weren't taking their chances, but in this game they made 4 and scored 3. Walsall winger Colin Taylor had Doug Hillard on the rack for most of the game but stand-in Centre Forward Trevor Meath was wasteful with the three chances that came his way. Bobby Jones in the 35th and 77th minutes and Harold Jarman with an 85th minute header were Rovers' scorers on the day to give the Gas a 3-0 victory.

Until last season Rovers had not beaten the Midlanders in Bristol since their 2-0 win on 9 September 1997, in that time they lost 5 and drawn 3 games. That sequence was ended with a 2-1 win for Rovers at the Mem. The home team went in front after only five minutes when a slip by Jon Guthrie allowed Rory Gaffney to latch on to a long ball from Chris Lines and advance to beat Mark Gillespie with a neat chip.

But Walsall had the better of the opening half and should have equalised four minutes before the break when Luke Leahy headed badly wide from an Erhun Oztumer free-kick.

The Saddlers equalised after 58 minutes when James Wilson rose to nod home a Joe Edwards corner and looked the more likely winners when Rovers goalkeeper Sam Slocombe was shown a straight red card from bringing down Amadou Bakayoko soon after.

But young replacement keeper Alexis Andre made a couple of important saves. Ollie Clarke volleyed the winner from eight yards in the 86th  minute after a cross from the left rebounded into his path off a Walsall defender.

Josh Ginnelly has thanked Dean Keates for giving him the confidence to shine at Walsall. Ginnelly, who joined on a free transfer from Burnley in the summer, puts his form down to the backing he has received from boss Keates.

“I just have to thank the gaffer and his staff to be honest. I have never really had a manager that backs me 100 per cent like he does,” he said, “The gaffer has seen what I have and he is just trying to get the best out of me and I can’t thank him enough. I am loving it here.”

Ginnelly went close a few times on Tuesday night, “It was frustrating. Both for us as a team and for me as well. I feel like I should have scored. I’ve had one blocked off the line, one saved and another over the bar. If I put those chances away it is a different game.”

“We definitely gave a reaction to Saturday. We feel like we dropped two points. But we will go again against Bristol Rovers. We have been good away, so we’re going into it with confidence and hopefully we can get the three points.”