This weekend Bristol Rovers entertain Oxford United. The Yellows, much like the Gas, have had a mixed season so far.

As Rovers were going down to their second successive 1-0 loss to a late goal, United were seeing off Plymouth Argyle at the Kassam Stadium. In doing so they ended a run of eight games without a win and went above Argyle in the table.

Just before the break, Dickie directed a diving header from Tony McMahon's free-kick straight into the goalkeeper's arms. The quality of Marcus Browne often gave the home side an edge, and the on-loan West Ham player nearly doubled the lead when shooting wide after his free-kick was charged down.

Another Argyle old-boy, Curtis Nelson wrapped up victory in the 74th minute with a close-range finish from Mackie's cutback. Plymouth's miserable afternoon was complete when Yann Songo'o received a red card for a second bookable offence 10 minutes from time.

U’s Assistant Coach Shaun Derry spoke to the Press after the game, "We’re not silly people, we knew this afternoon was a big game and I think we handled the emotion really well. I thought it was a collective display, the crowd were fantastic and right behind us.”

"We spoke about the opposition all week and ultimately it’s the players who have to go on and put in a performance. I thought they did that really well.  At times this season we’ve perhaps let ourselves down with our own self-discipline, but today I felt we managed the game really well."

Looking at the history of games between the teams, there have been 54 meetings since Oxford first entered the League back in the mid 1960’s, replacing Accrington Stanley. In terms of results the games between the teams have been fairly even over the years with Rovers winning 22, United 19 and 13 draws. In recent seasons Rovers have certainly had the upper hand with 6 wins, 1 draw and 2 defeats in the last 9 meetings.

The first game between the two teams was played on 18th September 1965 at Eastville. There were four goals scored, all by Jones, one by Oxford’s Tony, but the star of the day was Rovers’ Bobby who bagged a hat-trick. 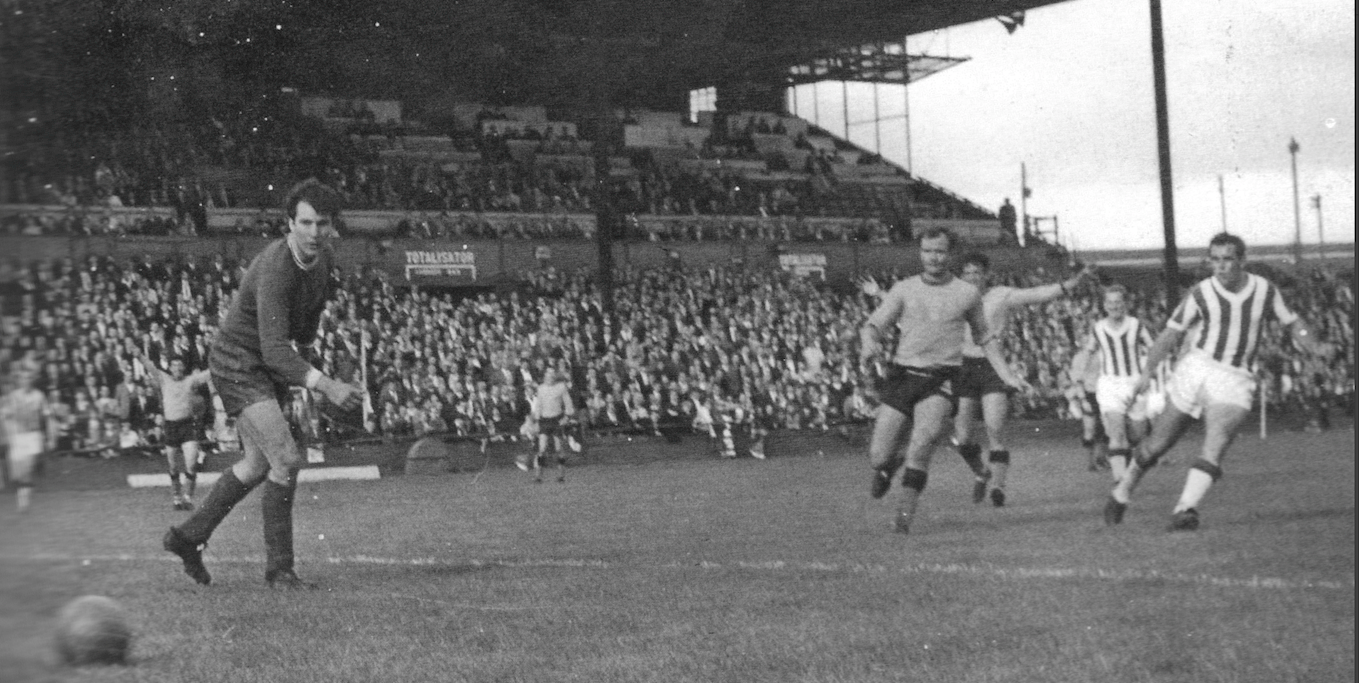 Bobby Jones Shot beats Harry Fearnley in the Oxford Goal in the 1964 game at Eastville.

However my vivid memory of that day was the Oxford keeper, Harry Fearnley who was smoking during the game! He used to rush into the back of his net whilst play was at the other end and have a quick puff. Also in the Oxford team was "Big Fat" Ron Atkinson, who the Evening Post noted failed to keep a tight grip on Bobby Jones.

The most goals scored in a Rovers’ home game was a stunning 6-2 win at the end of the 2000/01 relegation season, which ended up being meaningless as Rovers’ season fell apart at the death. That 2 goal haul was only the second time the U’s have managed two goals on Rovers territory. However the next time they registered that number at the Mem was in 2002/03 season when they secured a 2-0 win.

United opened the scoring on 21 minutes, Adam Chapman fed the ball into Jake Forster-Caskey, who turned and shot on the edge of the area. Alfie Potter doubled Oxford’s lead just after the half hour mark, after a slip from Michael Smith near the half way line. The Oxford winger made a great solo run, and slotted the ball home past Walker in the Rovers goal.

In the early season televised home game in 2015/16 Rovers, who had started the game strongly, but were reduced to 10 men with just over 15 minutes played as Ollie Clarke was shown a straight red by referee James Linington for an elbow on Oxford midfielder Danny Rose (a decision that was later overturned).

Numbers were evened up just before the hour mark as, following some neat interplay by Jermaine Easter and Matty Taylor, Taylor was bundled to the ground by Liam Sercombe (I wonder what happened to him) who was shown his second yellow of the game.

On 62 minutes the away team’s Kemar Roofe was allowed space to shoot on the edge of the area and curled a superb shot into the top right hand corner of the goal with the ball clipping the crossbar on its way past a helpless Aaron Chapman.

In 2016/17 a Jermaine Easter goal on 25 minutes gave Rovers the lead before Kane Hemmings, equalised for United just before half-time. The packed Mem was in raptures as Matty Taylor secured all three points with 20 minutes to go to secure a 2-1 home win.

Last season United won a closely fought game 1-0 in front of a 9,656 crowd. The best chance of an open, entertaining first half fell to the visitors after 20 minutes when James Henry completely mishit his shot from 12 yards after a low cross from Christian Ribeiro had given him a clear sight of goal.

Rovers also created opportunities, but went closest through a spectacular 20-yard volley from Chris Lines just before the break, which flashed narrowly wide. Rory Gaffney had the ball in the net for Rovers early on, but was judged offside from a Tom Nichols flick-on.

Substitute Alex Mowatt fired an 82nd-minute winner with a low left-footed shot from the edge of the box after a mistake by Tom Broadbent had allowed James Henry the chance to cross from the right.

It was a game littered with yellow cards, Ollie Clarke, Rory Gaffney and Liam Sercombe for Rovers and James Henry, John Mousinho, Christian Ribeiro and Joe Rothwell for United.

United striker Jamie Mackie came under strong criticism from Argyle fans following his exuberant goal celebration on Saturday. The way that Mackie celebrated his first goal for the U’s, and how he also won several free-kicks for them during the game, led to jeers for him from some of the Green Army.

Mackie spent two-and-a-half years at Argyle before leaving for Queens Park Rangers in August 2010. He insisted he still had a lot of respect for the Pilgrims and their fans but expressed his frustration too, “Do you know what, where I stand with this is that it actually does my head in. I will tell you why. I’m bottom of the league and I haven’t scored a goal yet. I’m not a robot.”

“How I react is how I react. I’m a passionate guy. I scored and I have been dying for a goal. We are bottom of the league and I’m playing for Oxford. I’m not going to not celebrate. But I have got the utmost respect for Plymouth as a football club, and their fans especially. I loved my time there. I played for two-and-a-half seasons in the Championship with them.”

“I gave everything every game for them. I loved it. I moved on to QPR and I kicked on with my career. I find it crazy in football how it comes across as disrespect. I don’t play for them now, but I wish them all the best.”

“I check the results and my best mate (Argyle left-back Gary Sawyer) is the captain there. I want them to kick on and do well in the league. I’m desperate for them to do well. But I’m playing for Oxford and I’m a passionate guy, and I’m not going to not celebrate.”

Oxford’s second goal in the 74th minute was also scored by another former Argyle player. Mackie could have tried a shot himself but instead squared the ball inside to centre-back Curtis Nelson. The ex-Pilgrims’ skipper then applied the finishing touch from close range.

However, there were no celebrations from Nelson after his goal against the club where his professional career began. Mackie said, “If he’s in a better position then I will always pass. I just want us to win the game. I’m not bothered who scores. Big Nelse was there and he actually slotted it nicely.”

Speaking about the pressure on Manager Karl Robinson, Mackie said, “It’s hurt me personally and I know it’s hurt all the boys and the manager. He’s a passionate guy and he believes in what he’s doing. The boys want to get results for him and the club; hopefully we can do that now.”