We were saddened to learn of the death of former Rovers player Joseph Davis, who passed away on Monday 26th of November 2018, aged 80 and the Club offers its condolences to his family and friends.

Reliable centre-half Joe Davis was a stalwart of Rovers’ side for many years.

The son of Joseph Davis senior and Edna Owen, who had married in 1934, his father’s sister Violet was the mother of Rovers’ Bobby Jones, the team-mates therefore being first cousins.

Captain of his school side and the county team, he boarded with Roy Bentley on trial at Chelsea, but disliked life in the capital and spent the bulk of his career instead with Rovers.

Davis’ National Service was spent at Devizes with Pay Corps, for whom he played in the Services Cup Final, which was lost 1-0 to REME.

A professional earning £35 per week, he was the club’s Player of the Year in 1964-65, became the first substitute used by Rovers in League football, when he appeared in the game against Walsall in October 1965, and his four League goals all came from the penalty-spot.

Naturally right-footed, he had worked on power in his left foot so much that all his penalty kicks were taken with his supposedly weaker foot.

Converted to full-back once Stuart Taylor had laid claim to the centre-half berth, Davis found his career at Swansea blighted by Achilles trouble.

Retiring from the game, he became a newsagent before spending thirty years employed by the Bristol Evening Post, working from 1973 as field sales manager, and was a committee member of Rovers’ Ex-Players’ Club.

His later career saw him develop the burgeoning talent of young footballers such as Gary Penrice, Ian Holloway, Phil Purnell, Steve White and Paul Randall, while he and his wife Alma had three daughters and four grandchildren.

Pictured: Joe receiving the 1964/65 Player of the Year Award. 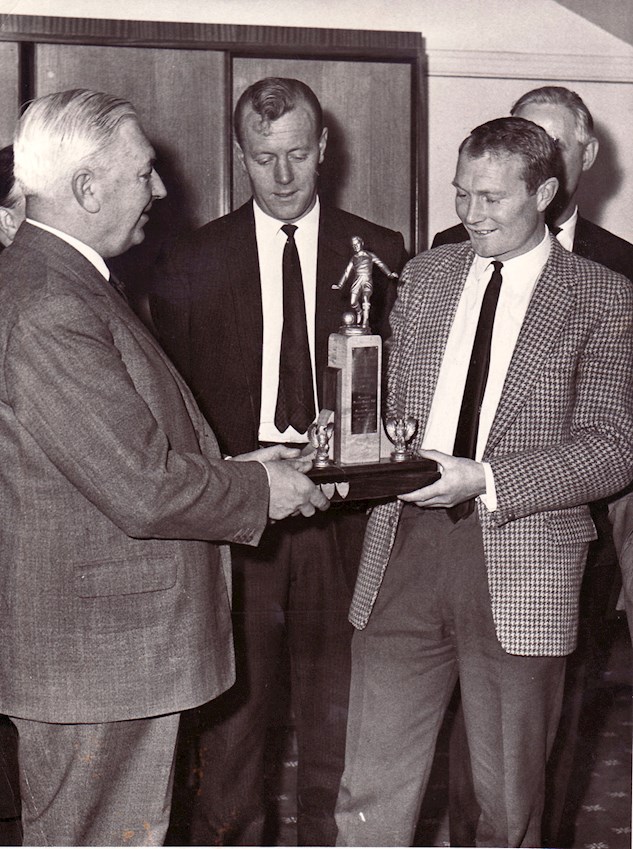