Having looked at the three sides dropping down into League One from The Championship, it’s time to focus on the four clubs joining us from League Two.

Champions Accrington Stanley will be playing at this level for the first time in their history, and there can be very few Rovers supporters who would begrudge them their opportunity given that we pipped them for the final automatic promotion spot on the final day of the 2015/16 campaign.

The first league meeting between the sides came in 2006/07 when Rovers recorded a 4-0 win on the Saturday before Christmas.

Our record against Stanley isn’t the best, as we have won only two of the ten league games between the clubs, to Accrington’s seven, with one game drawn. Rovers have never beaten Accrington on their own ground in five attempts, so here’s hoping that changes this time around!

Among the players to have turned out for both clubs is the delightfully named Kossuth Seed Barnes, who played two games for the original Accrington Stanley, way back in 1923.

More recently, supporters of both sides will recall defender Joe Jacobson, who joined Rovers via Cardiff City and Accrington, and made 73 league appearances for The Gas before moving on to Oldham Athletic. 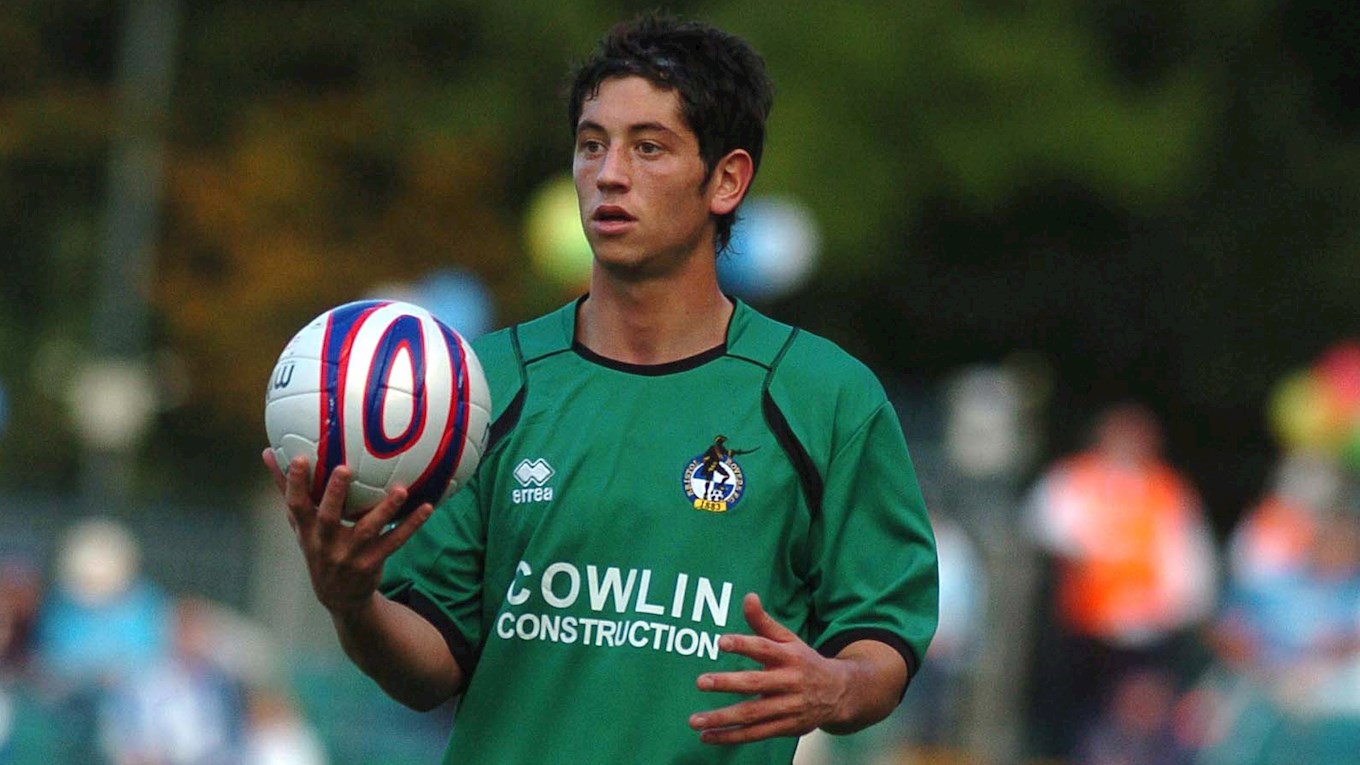 Joe returned to Accrington following his stint at Boundary Park, and later payed for Shrewsbury Town. He signed for Wycombe Wanderers in July 2014 and was a member of their promotion winning side last season, playing 51 games in all competitions, so all being well we will see him back at The Mem soon!

Accrington are our opponents for our first home game of the new season as they travel to The Mem on 11th August, while we make the long trip up to Lancashire for the return fixture on 12th January.

EFL Two runners up Luton Town and Rovers are no strangers, having met in the league no fewer than 80 times, The Hatters having 31 wins to their name, Rovers 27 and there have been 22 draws.

Luton also have the distinction of being involved in the first ever cup tie at The Mem, on 4th September 1996 when Rovers won 2-1 in a first round, second leg League Cup tie. However Luton progressed to the next round, 4-2 on aggregate, having won the first leg 3-0 at Kenilworth Road.

We did the double over Luton the last time our paths crossed, in 2015/16, winning 1-0 at Kenilworth Road thanks to a last gasp Stuart Sinclair goal, on 18th August 2015, and 2-0 at The Mem in the return fixture on 2nd January 2016 when two Rory Gaffney goals secured victory in front of a crowd of 9,131.

Prior to 2015/16 the last meetings between the sides had come in 2007/08 and many supporters will recall the Boxing Day 2007 game between the sides here at The Mem when Luton had three players, Chris Coyne, Steve Robinson and Anthony Grant sent off yet still left BS7 with a point from a 1-1 draw.

Richard Dryden and Kevin Street are among the players to have turned out for both sides, as well as two players still plying their trade in BS7. The aforementioned Stuart Sinclair began his career at Luton, though was released by the club before being given a first team opportunity.

Lee Mansell, however, scored eight goals in his 47 league goals for The Hatters before going on to play for Oxford United and Torquay United. 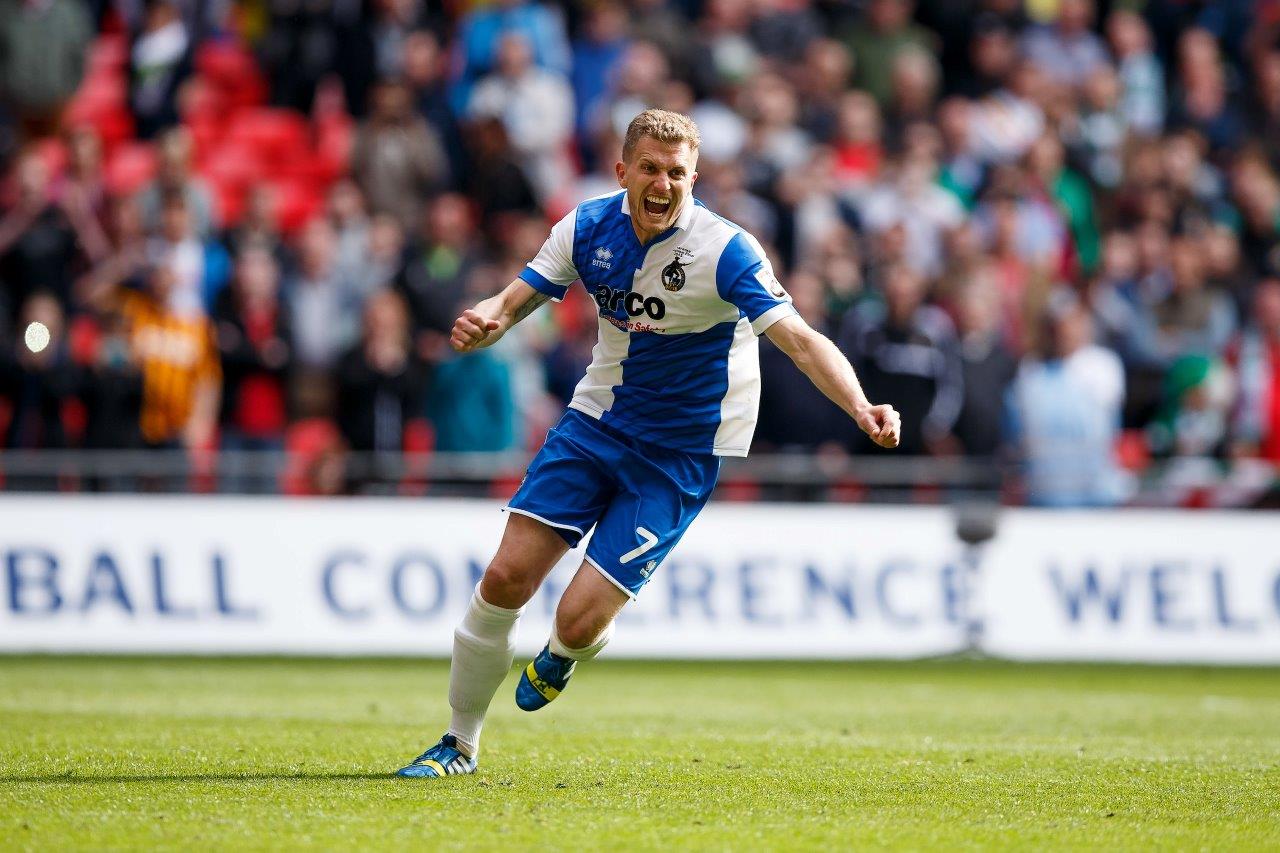 He pitched up in Bristol from Plainmoor at the start of our Conference campaign and earned himself legendary status when converting the winning spot kick in the play off final against Grimsby Town at Wembley, sealing our return to The League after just one season.

After hanging his boots up at the end of the following campaign, he took on a coaching role in our Academy and he and Tom Parrinello are bringing through the next generation of first team players.

Match number 81 in the long running sequence of games between our clubs takes place at Kenilworth Road on 15th September, while The Hatters visit The Mem for the return fixture on 30th March.

Moving on to the third of the promoted clubs, Wycombe Wanderers, and their Adams Park home holds many memories for Rovers supporters, some good, some bad!

Since our first ever league meeting with The Chairboys, in 1994/95, we have played each other on 28 occasions, and have 11 wins to our name. Wycombe, though, have won 13 of those games and there have been four draws.

We seem to be drawn against Wycombe in the Football League Trophy, in its many guises, quite frequently (five occasions at the last count) and there have also been two FA Cup meetings and one in the League Cup.

Two League Cup encounters in particular stand out, for different reasons. We won 2-0 at Adams Park in 2006 and one of our goals was scored by Jamal Easter, whose brother Jermaine, later a Rovers player, was in the Wycombe side.

In 2010, again at Adams Park, we won 6-3 with players from both sides scoring a hat trick, Jo Kuffour for Rovers and Colin Rendell for Wycombe. Later in their careers, each would play for the other club, Kuffour for The Chairboys, Rendell for The Gas.

Two games against Wycombe in recent times stand out, though, for very different reasons. One has been expunged from the records as the game at Adams Park on 25th August 2012 was abandoned with Rovers leading 3-1. There was a great deal of controversy surrounding the decision to call the game off (waterlogged pitch/thunderstorm/spectator safety; take your pick!) which continued for quite a while and it wasn’t helped when Rovers lost the rearranged game!

The game at the same venue, on 26th April 2014 saw Rovers win 2-1 thanks to goals from Lee Brown and David Clarkson, whose last gasp winner left us needing a point from our final league game, against Mansfield, to avoid relegation to The Conference.

Wycombe were one of three clubs below us on that final day and stayed up because of our inability to take anything from our game against The Stags, so we accompanied Torquay United down to the fifth tier of English football.

Apart from the aforementioned Joe Jacobson and Jermaine Easter, a number of players have turned out for both sides, including Lance Cronin, David McCracken and Danny Senda.

Perhaps, though, the best known of those who have played for both is Andy Rammell. The burly striker began his career with Atherstone United before earning himself a dream move to Manchester United. 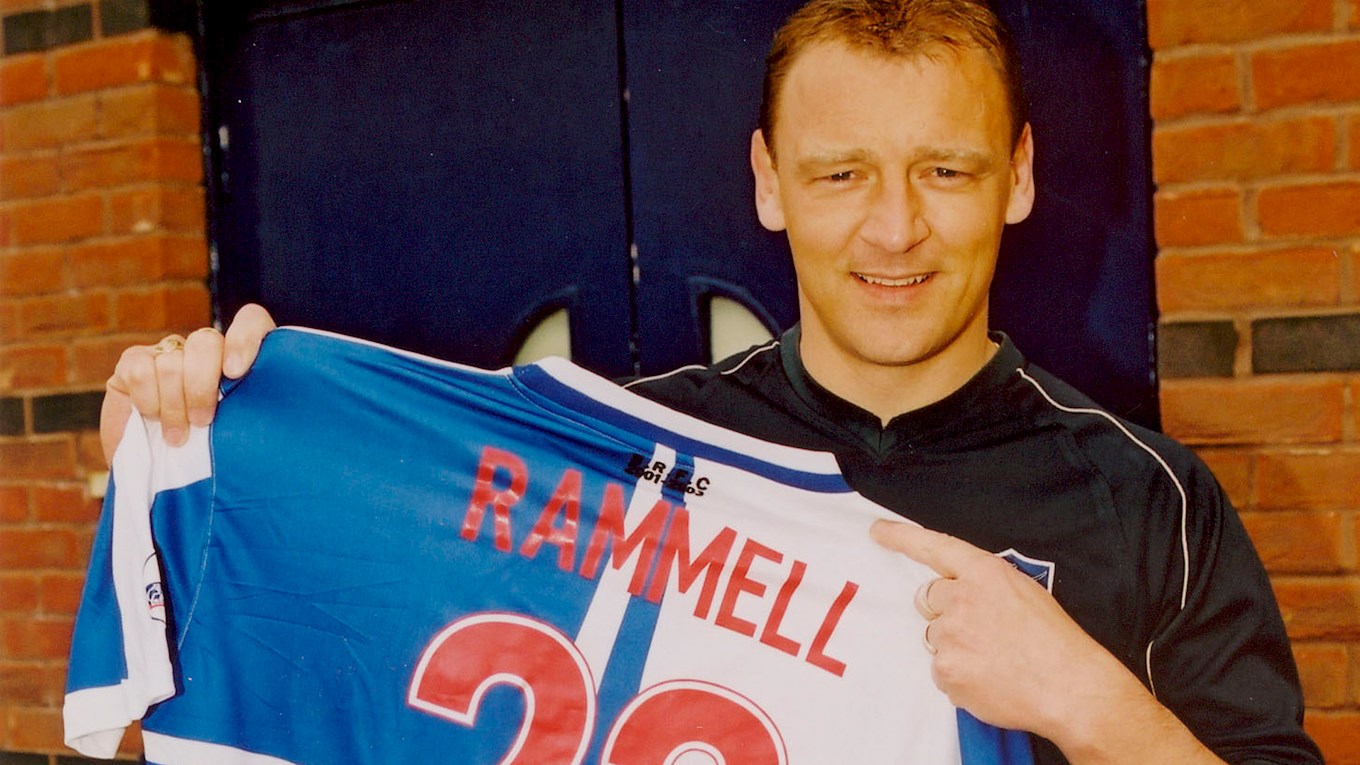 He never appeared in United’s first team and went on to play for Barnsley, Southend and Walsall before his arrival at Adams Park where he was to score 25 goals in 74 league games for The Chairboys.

Ray Graydon brought him to The Mem in March 2003 and his four goals in seven games helped the club avoid relegation from the Football League.

Next season we face Wycombe in our third league game of the campaign, travelling to Adams Park on 18th August, almost six years to the day since the debacle of 2012, while The Chairboys travel to The Mem on 19th January.

That brings us on to the fourth promoted club, Coventry City, who came up by virtue of their play off final victory against Exeter City.

The first league meetings between the clubs took place as long ago as the 1926/27 season and yet there have only been 28 head to head encounters in the ensuing 92 years.

In fact, we did not play each other, in league or cup, between 1963/64 and 2016/17 and those two most recent games saw us meet with contrasting fortunes.

On Boxing Day 2016, with a crowd of 11,200 inside The Mem, Peter Hartley’s goal after 18 minutes was followed by a Billy Bodin hat trick as Darrell Clarke’s side registered a comfortable 4-1 victory.

The return fixture saw Rovers make their first ever trip to The Ricoh Arena, on 25th March 2017 when there was a rare start for defender Jonny Burn. The only goal of the game was scored by Coventry’s George Thomas in the 80th minute.

Graham Withey and Nicky Platanauer are among the players to have turned out for both clubs, while Bobby Gould has the distinction of managing them both.

However possibly the best known player to have played for both is Kenny Hibbitt who began his career with Bradford Park Avenue before securing a move to Wolves, for whom he was to appear in 465 league games. 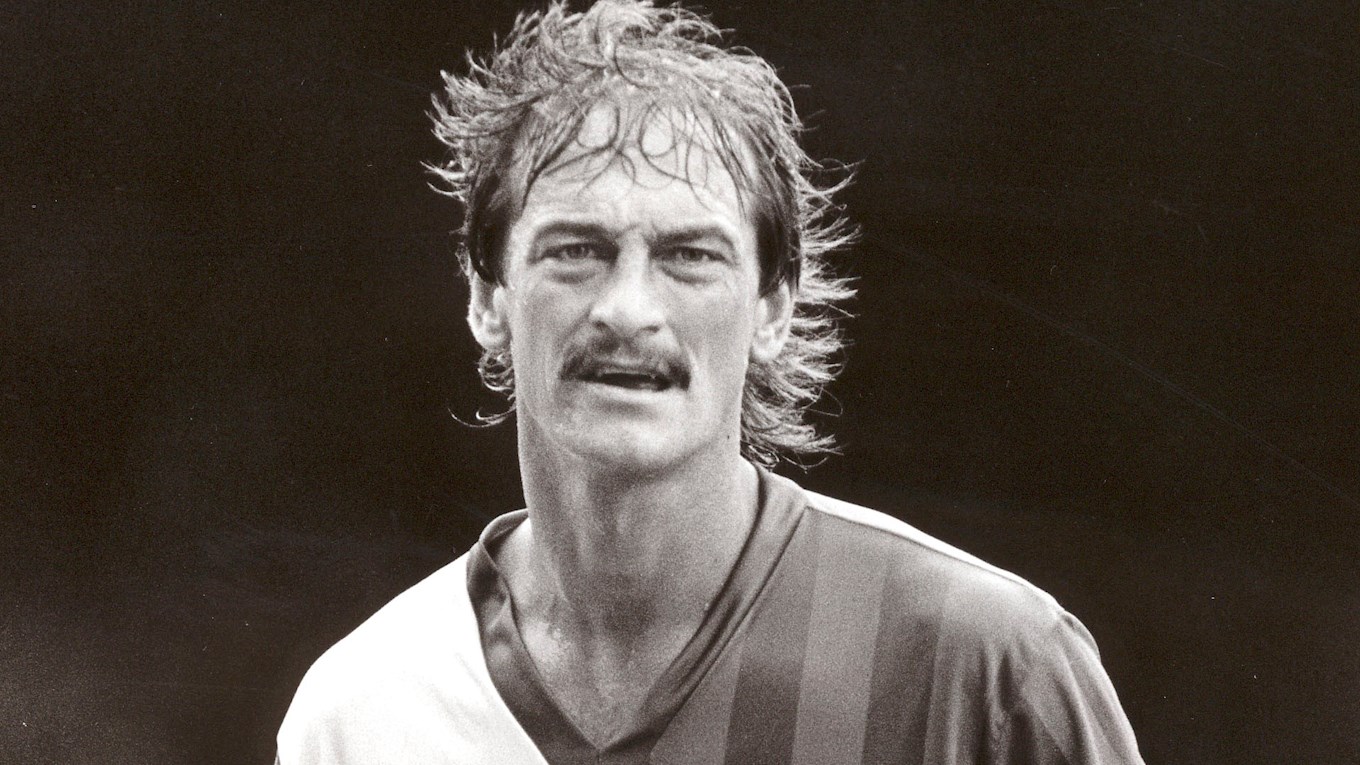 He moved to Coventry via Seattle Sounders and scored four goals in 46 league games for The Sky Blues.

Hibbitt joined Rovers as player/coach in August 1986 and scored five goals in 53 Gas league appearances before going on to manage Walsall and Cardiff, and coach at Everton. He later enjoyed a second stint in a number of posts with Cardiff and managed Hedensford Town up until 2002.

We host The Sky Blues on 22nd September and make our second ever trip to The Ricoh Arena on 6th April.