Ryan Sweeney, Rory Gaffney and Ellis Harrison provided the goals as Darrell Clarke's side came from behind to claim victory over Doncaster Rovers.

An early goal from striker John Marquis provided the home side with the perfect start to the encounter, as the towering forward converted a close-range finish inside the opening three minutes.

Ryan Sweeney pulled the scored back level midway through the first-half, as the defender was in the right place at the right time to benefit from Liam Sercombe's cushioned header back across the face of the Doncaster goal, with Sweeney making no mistake to claim his fourth goal of the season.

A bright start to the second half led to Rory Gaffney thundering home from inside the Doncaster area just four minutes after the interval, as the striker kept his composure in a one-on-one situation with Lawlor to put Rovers ahead in the contest.

Doncaster came close to registering an equaliser, as Matty Blair blasted a close-range effort over the crossbar, which was quickly followed by John Marquis miscuing an effort inside the six-yard box that resulted in his attempt bouncing wide.

Ellis Harrison was found the net inside the final ten minutes, with a fine individual goal, as Darrell Clarke's side picked up the three points on offer at the Keepmoat.

Heading into the game, Manager Darrell Clarke was forced into making one change, as captain Tom Lockyer was forced out of the encounter due to injury. That led to a straight swap in the heart of the Rovers defence, as Ryan Sweeney was chosen to replace Lockyer.

The change meant that there was room on the bench for Rollin Menayese, who signed a contract extension with the club earlier in the week.

The game was only three minutes old when the home side edged ahead. Striker John Marquis managed to burst to the near post to connect with a low cross from the right, poking a close-range finish beyond Adam Smith, who looked to have kept the ball out with a reaction save on the line, but Marquis' effort squeezed into the net.

Rovers had to be patient in their attempts to forge changes to get back into the game. A well-weighted corner to the near post by Chris Lines gave Ellis Harrison the opportunity to force a header towards goal, but the striker's powerful attempt flashed just wide of the target.

The visitors kept asking questions of the Doncaster back-four and again came close to returning balance the scoreline through Chris Lines. The move was started by a whipped free-kick into the Doncaster area by Joe Partington, which was only cleared as far as Lines, who was in the pocket of space outside the penalty area. Waiting patiently for the ball to drop, the midfielder sensed an opportunity to shoot towards goals and his effort was met by a diving save by Lawlor, who managed to deflect the shot around the post.

After coming close on several occasions, Darrell Clarke's side managed to break down the resilient Doncaster defence just after the twenty-minute mark. The home side failed to clear a cross into the area, which allowed Chris Lines to deliver a deep ball to the far-post that was directed back across goal by Liam Sercombe, which left Ryan Sweeney the simplest of tap-ins to level the scores. 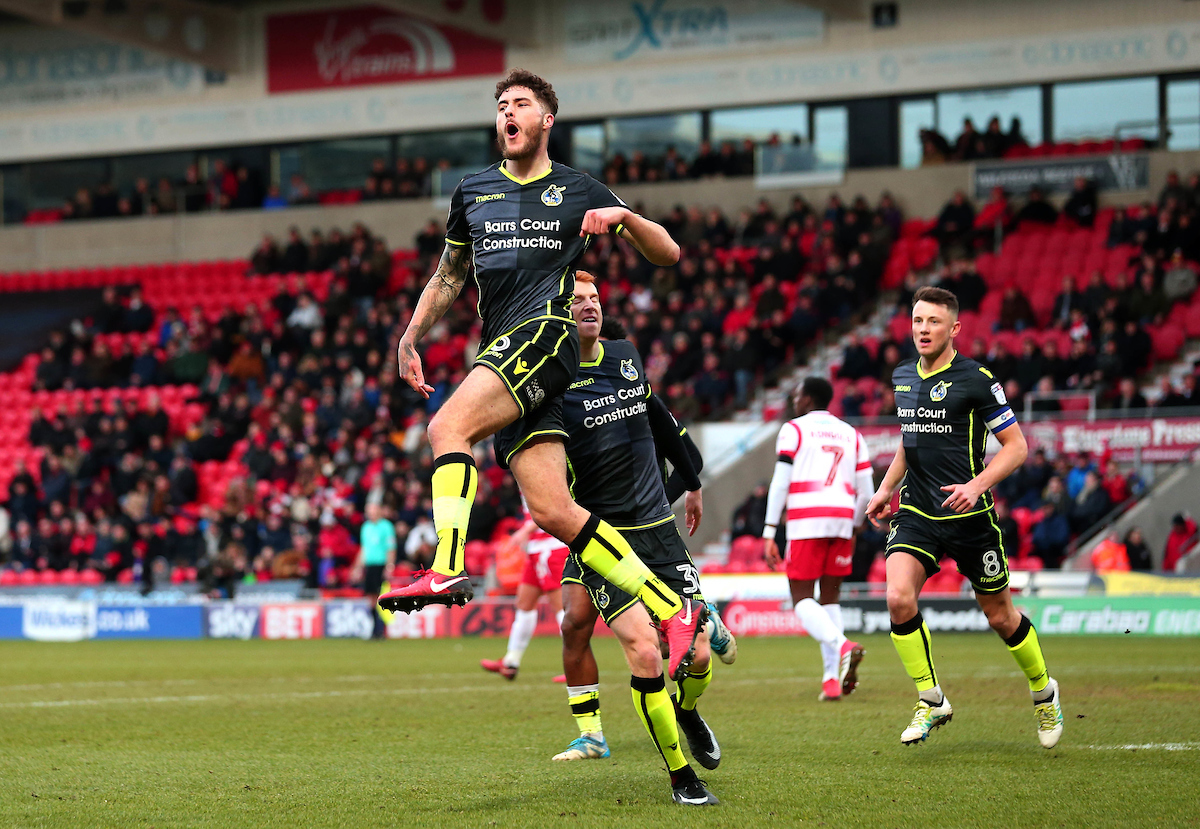 Sweeney's goal signalled a spell of prolonged possession for Rovers, who came close to going ahead in a fine counter-attacking move, which began with a Stuart Sinclair showing good vision to pick out Ellis Harrison. The striker was able to knock the ball around an onrushing defender and advance deep down the left before firing a threatening cross into the area that narrowly bounced out of reach of Rory Gaffney.

Ahead of the interval, Doncaster had chances of their own, as both Tommy Rowe and Alfie Beestin had efforts from inside the box deflected away, as Ryan Sweeney and goalkeeper Smith kept their focus in the frenzy to ensure that the goalbound attempts didn't find the target.

Following the break and attacking the goal towards the vocal travelling support, Rovers started the half brightly. Ellis Harrison was able to control a ball forward and with a neat use of footwork was able to break into the Doncaster area. The striker was unable to open up a shooting opportunity but picked out a pass to Stuart Sinclair, who managed to drive an effort past Lawlor, but the effort was blocked on route to goal by Tommy Rowe.

Sinclair didn't have to wait long for another sight of goal, as the midfielder was able to latch onto a slack clearance and deliver a driven effort towards goal that forced Lawlor into making a diving save.

After the duo of chances from Sinclair, Rovers were ahead just four minutes after the break. The goal involved both strikers, as Ellis Harrison flicked a header into the path of Rory Gaffney inside the Doncaster area. Gaffney was unmarked and took full advantage of the opportunity, placing a powerful finish out of the reach of Lawlor to put Rovers ahead.

There was an anxious moment for the visitors on the hour mark, as Doncaster found joy breaking down the left. Tommy Rowe managed to advance deep into the final third before firing a dangerous cross into the six-yard box that Matty Blair managed to lift over the crossbar from close-range, in what was a let-off for the visitors.

Blair's chance was quickly succeeded by goalscorer John Marquis breaking loose in the Rovers area. The striker managed to latch onto a loose ball inside the six-yard area but miscued his shot under pressure from the Rovers defence, which resulted in his scuffed shot bouncing wide of the target.

Rollin Menayese and Lee Brown were introduced from the bench, as Rovers switched to a back five in order to keep the home-side from forcing a late equaliser, but were able to deal with the endeavours of the home side in the final stages of the encounter.

Ellis Harrison added the security of a third goal, as the striker raced in behind the Doncaster defence and produced a high-quality finish to top off the victory inside the final ten minutes, as Darrell Clarke's side claimed all three points on offer, extending the recent unbeaten run to six games. 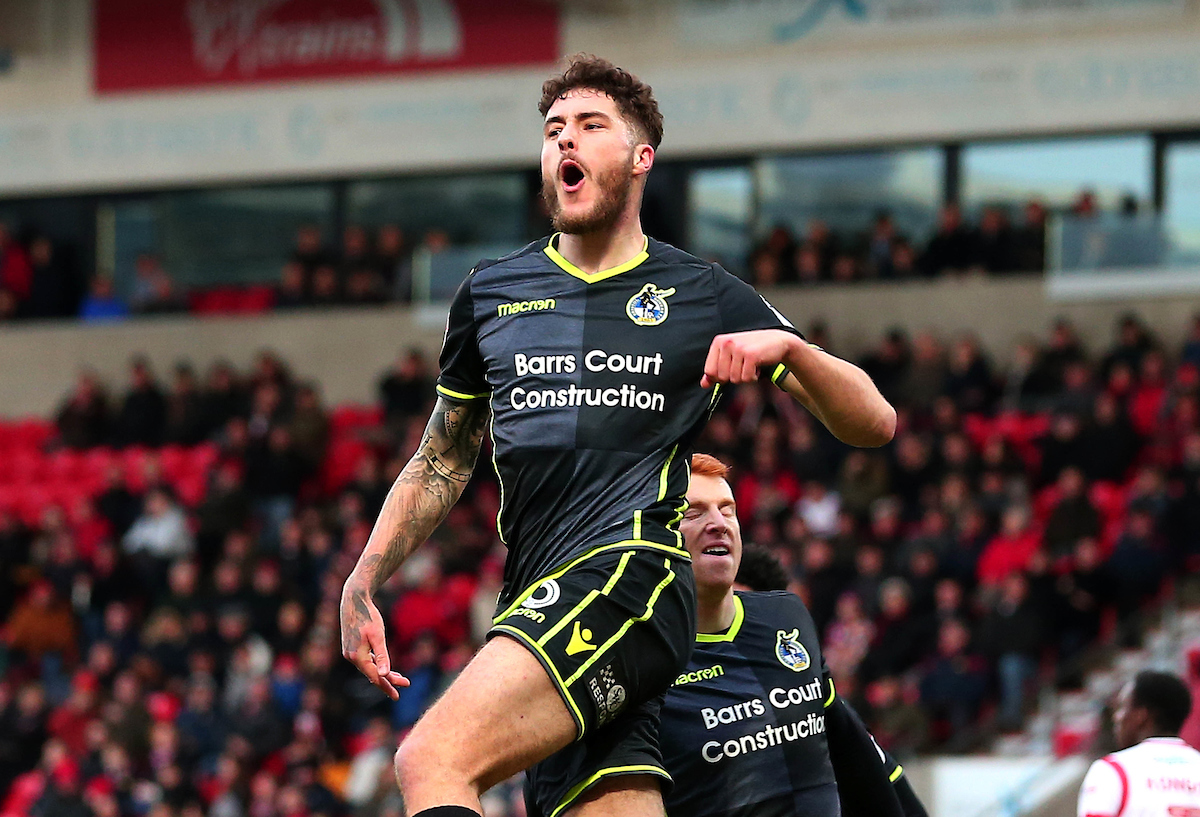