The most entertaining duo in the world of professional darts will appear together for an evening of unrivalled sporting entertainment at Bristol Rovers FC in 2018.

Darting royalty in the form of the legendary Bobby George will appear alongside charismatic pro-turned commentator and pundit Wayne Mardle at the Memorial Stadium on Wednesday 7 February.

The pair are famous for their flamboyant and fun-loving stage presence as much as their excellent darting ability - and entertainment is guaranteed before a dart has even been thrown.

Both have crowd-pleasing walk-on routines and are widely regarded as the kings of the exhibition circuit since retiring as professionals.
George, nicknamed ‘The King of Bling’ was a pioneer in bringing showbiz and razzmatazz into the game of darts.

Mardle took up the mantle as the sport’s biggest personality in the modern Premier League era.

‘Hawaii 501’ also has an excellent professional record, reaching the semi-finals of the World Championship five times before opting to retire early and pursue a successful media career.

The pair will entertain the crowd with their trademark on stage antics during matches against lucky local players.

They will then reveal all about their incredible lives during the amazing rise of darts with an up close and personal interview, featuring an open question and answer session with the audience. 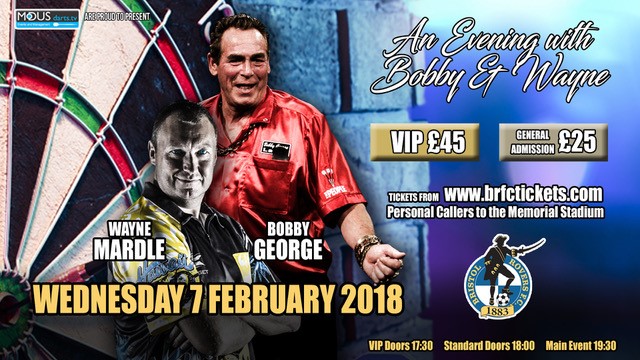