This season’s issue is packed full of news and views from an eclectic mix of contributors, all writing about Bristol Rovers and those articles sit side by side with a wide range of articles on club matters.

In Saturday’s programme, for our game against Bradford City, manager Darrell Clarke pens his own notes, and we have a match report our most recent Development game as well as an in depth look at our Academy U-12 squad, who will be introduced to supporters on Saturday. In addition, we feature a profile of First Year Scholar Scott Isherwood.

Our programme cover features the celebrations that followed Liam Sercombe’s dramatic late winner against Portsmouth on New Year’s Day, while new signing Bernard Mensah is featured in our centre spread.

Don’t forget our extensive historical section, either, as this week we take a look back at January 1987, a month that started so well with a 1-0 win at Ashton Gate, there was transfer speculation surrounding striker Trevor Morgan and manager Bobby Gould gave a trial to a Canadian World Cup player. His name was Paul James without realising his ambition of playing league football.

Also, catch Stephen Byrne’s Rovers’ Miscellany, an article in which he looks at Rovers players and opponents who have names linking them to the church. For example, Rovers have faced 10 players named Bishop down the years, including Scunthorpe United’s Neal, who scored the only goal of the game at Glanford Park last November.

In addition we carry interviews with Liam Sercombe and Tom Lockyer, while it’s Rory Gaffney’s turn to be the dressing room DJ in this week’s edition of Pirate Sounds, brought to you by Lance Cook.

The Pirate is available from the club shop and sellers around the stadium and still only £3.00; why not purchase a copy this weekend and see what you think? 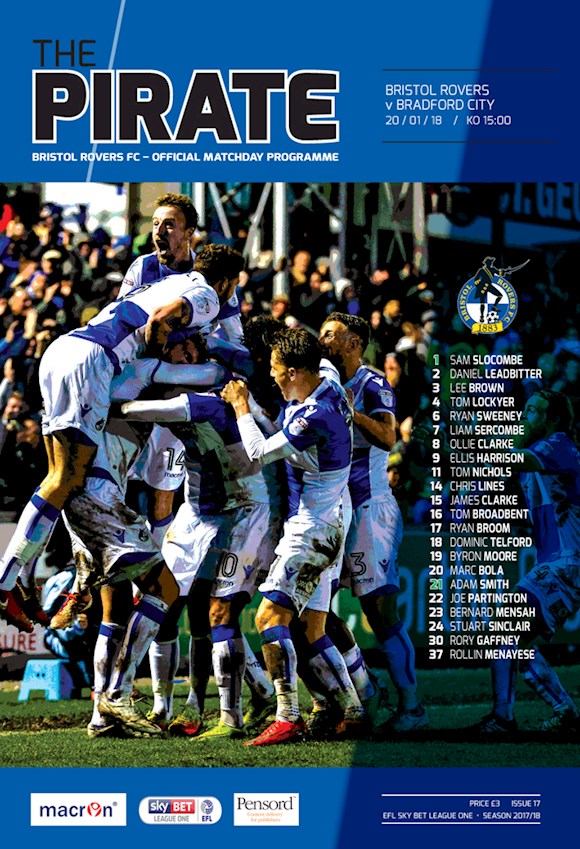