This season’s issue is packed full of news and views from an eclectic mix of contributors, all writing about Bristol Rovers and those articles sit side by side with a wide range of articles on club matters.
In Tuesday’s programme, for our game against Rochdale, manager Darrell Clarke pens his own notes, and we have match reports from our most recent U-18’s games and photos of our U-12’s and U-13’s, who have been recent guests of ours at The Mem.

Our programme cover shows Kyle Bennett celebrating his goal at Oxford on Saturday and he is also featured inside as he was interviewed after that match.

Another recent arrival, Bernard Mensah, is also interviewed for this issue and Liam Sercombe is our centre spread poster.
Don’t forget our extensive historical section, either, as this week we take a look back at February 1980 a month that saw Harold Jarman holding the managerial reins, and it was reported that he had recruited his former Rovers team mate Bobby Jones as youth coach.

Jarman also took Terry Cooper back on to the staff and revealed that he planned to give the former England international special responsibilities during matches.

Also catch Pirate Sounds and see what music our dressing room DJ chooses this week, and travel back to 2010/11 when Rovers and Rochdale both recorded home wins when they met in the league and, naturally, there are a few photos of the legend that is Rickie Lambert, who played for both clubs.

The Pirate is available from the Club Shop and sellers around the stadium and still only £3.00; why not purchase a copy this weekend and see what you think? 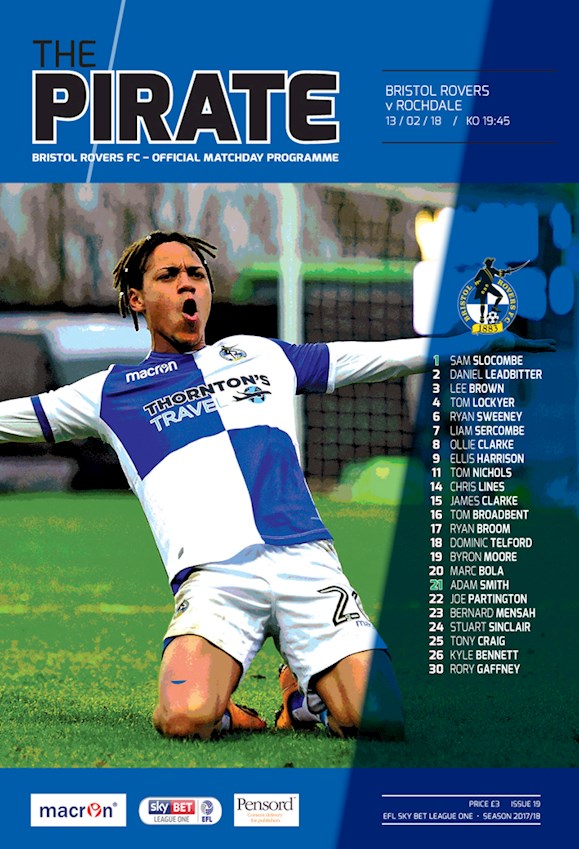