Rovers came from behind yet again, to claim a dramatic 3-2 victory over Rochdale at the Mem

In what has almost become foregone conclusion of late, Rovers fell behind and did so when Dale's Ian Henderson stabbed home from a corner amidst confusion following a raised linesman flag that was subsequently overuled by the referee.

Darrell Clarke's men came straight out in the second half looking to get level and did exactly that when Liam Sercombe volleyed home at the back post to put Rovers in the lead and score his 11th goal of the season.

Shortly after that Joe Partington headed in on 65 minutes to bizarrely score for the third successive home game, however the visitors replied almost immediately through Henderson to make it 2-2.

You sensed there was another goal in the game and it thankfully went Rovers' way, with Chris Lines bending a beauty into the top corner from the edge of the box on 78 minutes to claim all three points. 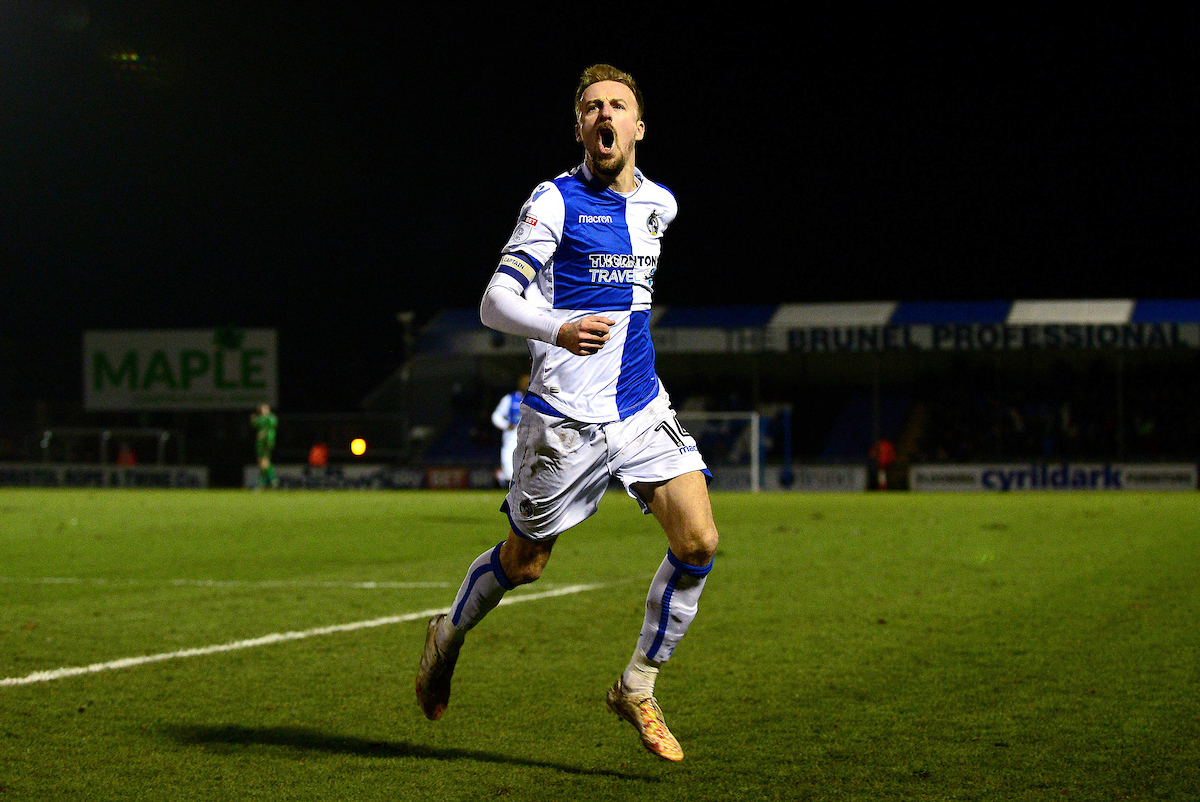 Darrell Clarke made three changes to the side that picked up three points at Oxford United on the weekend, with Partington, Rory Gaffney and Tom Nichols coming into the starting line-up in place of Kyle Bennett, Daniel Leadbitter and Ellis Harrison; the latter two picking up injuries at the Kassam Stadium.

Following his unfortunate mistake on the weekend at Oxford United, Adam Smith had another early wobble when the stopper spilled Ian Henderson's long range effort towards the path of Callum Camps, but Smith just managed to beat the forward to the ball but took a knock to head in the process, which required treatment and a lengthy stoppage in play.

After about five minutes of medical assistance, Smith was back on his feet and restarting play from a free kick in his box.

Rovers' first sniff of goal came just pass the 11 minute mark, when Partington put his foot through a loose Lines pass that somehow put Nichols through on goal but the forward was forced wide and had to cut back to Liam Sercombe, whose cross was just a touch too high for Gaffney.

Neither side was retaining posession for long period of time yet despite proceedings being end to end, neither were fashioning many chances either.

Gaffney did show promise with some on 23 minutes with some excellent ball control on the half-time allowing him to turn his man and beat two more, but his attempted through ball to Nichols was cut out.

However there was a spanner in the works shortly after amidst a cloud of confusion concerning a Rochdale corner and the officials.

The visitors swung in a corner that prompted goal mouth scramble, with ball ricocheting over various players before squirming over the line at which point the linesman raised his flag to suggest he'd spotted an impedment.

But after some deliberation from the referee and confusion in the stands, the goal was awarded and Dale took the lead; Henderson the man believed to have got the final touch.

With discontent swirling around BS7, The Gas went in search of an equaliser and a spark for a trademark comeback, again Gaffney involved as the striker used his strength to wrestle a defender off the ball before letting fly on the edge with his left foot, but his effort flew marginally wide.

Almost immediately after the ball was up the other end and Rochdale almost doubled their lead, if not for a great reaction save from Smith to deny Stephen Humphrys.

Gaffney continued to look like The Gas' most likely source of a goal, again using his strength superbly to hold off a defender in the box, control a high ball onto his left foot and strike, but Josh Lillis did really well to get down quickly and deny him. 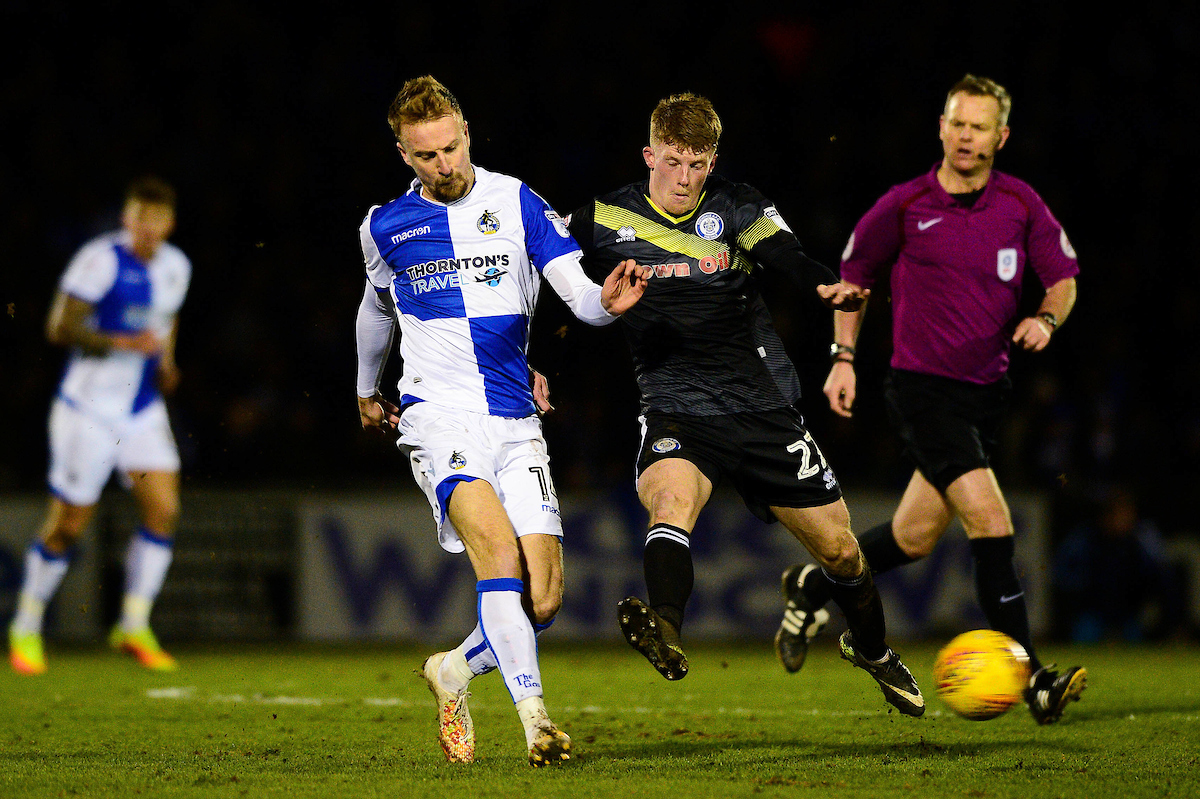 Rovers came flying out the blocks after the break and were inches away from pulling themselves level, with Tom Broadbent's header crashing off the post after he'd met it close in from a corner.

Just minutes later and the scores were level, Sercombe bringing his tally to an impressive 11 goals, volleying home Lee Brown's cross at the back post via a slight deflection.

Smith was having to remain alert between the Rovers sticks, and produced a fine stop down to his left, stretching to tip Humphrys' bottom corner-bound curler.

Clarke was forced into his first change on 56 minutes, with Marc Bola replacing an injured Brown at left-back.

With stats and records being somewhat of a hot topic at the moment, another odd one came to fruition when Partington scored for the third successive home game, having only netted his first goal for the club last month.

The right-back won a free kick down his flank and got straight into the box to await what turned out to be an exquisite Lines delivery before glancing a header across the keeper and into the bottom corner.

However The Gas were then almost immediately pegged back, with Bradden Inman sliding in Henderson who had his initial shot saved, but was on hand to tap home the rebound.

The hosts made their final substitutions with a double switch; Byron Moore and Kyle Bennett replacing Ollie Clarke and Nichols.

Moore got straight into the action when the ball popped out to him about 12-yards out and he struck what looked to be a goal-bound volley at the target, but it was well blocked.

The winger looked to be in the mood and played a massive part as Rovers took the lead for the second time with little over 10 minutes left of normal time.

Moore spun his man superbly down the left flank, before resisting the urge to chuck in a hopeful cross and instead picking out Lines on the edge of the box who then arrowed a fantastic controlled strike right into the top right corner before wheeling off in celebration towards the fans.

Lines who had been fantastic all evening once again, could've even doubled his tally and all but sealed the result, as he controlled a Bola cut back on the edge of the area and looked to bend the ball into the top left corner and demanded a fine save from Lillis.

Gaffney also had a great game, and aided Rovers' attempt to see out the result with strong hold up play and dogged defensive work from the front.