Bristol Rovers will be looking to reverse the result of their previous two home League games on Saturday as they entertain Southend United on Saturday.

Southend, under their talismanic Manager Chris Powell, have themselves had a patchy start to the campaign. Two losses, one win and a draw puts the Shrimpers one point and six places above the Gas. Interestingly ‘nice guy’ Powell was one of the first two Managers to be shown a red card under new rules this season, the fact that the other Manager was Plymouth’s Derek Adams would not surprise any Rovers fan. Powell admitted that he held Adams by the throat after the Scotsman had verbally abused the Shrimpers  Simon Cox.

On Tuesday night as Rovers were going down to Portsmouth, Southend visited Kenilworth Road and found themselves 1-0 down inside 90 seconds as Pelly-Ruddock Mpanzu's blast deflected into the path of Elliot Lee, who made no mistake from seven yards.

Tom Hopper had a goal chalked off for the visitors for a push on 22 minutes and Luton midfielder Jorge Grant had an effort tipped over by Shrimpers keeper Mark Oxley. It was 2-0 on 33 minutes when Elvis Bwomono brought down Lee in the area and Danny Hylton slammed home the penalty.

Hylton could have doubled his tally moments after half time but Oxley did well to save.

Jason Demetriou fired wide for the visitors on the hour mark, followed by Simon Cox, who skied over from Theo Robinson's cross.

Town then dominated the latter stages, Hylton hit the side-netting and Lee's close range shot was parried by Oxley. The visiting keeper also denied Andrew Shinnie after the midfielder went through one-on-one, while Mpanzu wasted a late chance to make it an even more impressive win.

Speaking after the game Powell said, “You can’t start a game like that and expect to get yourself a result. I know there was a long way to go, but your game-plan goes out the window in the second minute and you can’t do that early doors in games, it changes it completely.”

“I suppose we responded with our usual style of play, but we just didn’t have that drive to get the ball in the box and really test their keeper. We had half-chances but none on target and the way we’ve been playing recently, that’s disappointing.”

“We played a slightly different team: JD [Jason Demetriou] came in and losing Tim [Dieng] at half-time wasn’t great with a slight injury, so we’re obviously chasing it then at 2-0. You don’t want it to become three, four or five. Mark Oxley twice made two superb saves, you’re putting people on to try and change it and you’re chasing it but it’s one of them nights really. It just hasn’t really gone for us.”

In previous meetings the Essex team have the distinct advantage, having won 46 of those games to Rovers’ 40 victories. 32 of those Rovers’ wins have been in the West Country, so just 8 wins for Rovers at the seaside town. The Shrimpers have a better away record than Rovers with 12 wins in the West of England.

The very first meeting between the clubs took place during the First World War as they tied 0-0 at Eastville on 16 January 1915 in an FA Cup match. In the replay at Roots Hall, Southend ran away with it 3-0. Rovers had a shocking record in the seaside town, taking 18 visits to record their first victory and there were only 4 draws in that sequence. In the first 27 games between the teams Rovers only won 8 and Southend 15.

Games between the teams are generally tight with 114 games played, Rovers have scored 1625 goals and United 172, at home there have been 55 games with 109 Rovers goals and 63 to United.

Looking at those previous meetings, back in 1964-65 season Rovers were looking a strong prospect for promotion. By the end of April they had dropped away from the leading pack. The day after a dull 1-1 home draw with Exeter they needed to beat Southend in their final home game of the season to give themselves a realistic chance of going up. John McKinven gave Southend the lead early in the second half, but then in the last 10 minutes the game exploded into life, Harold Jarman and Alfie Biggs gave Rovers a 2-1 lead with just 2 minutes left, but Watson equalised a minute later. 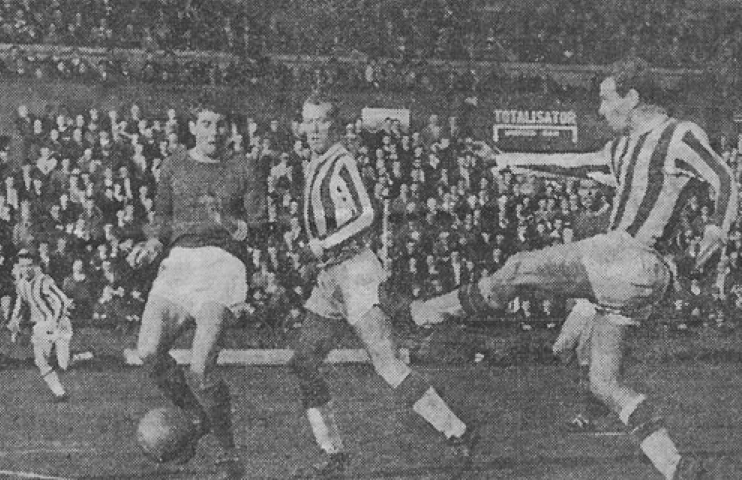 It was the following season when Southend suffered their first ever relegation, Rovers gained their revenge on 5th March 1966 for a 2-0 defeat inflicted at Roots Hall less than a month before. Harold Jarman, Dave Stone and Johnny Brown hit the net for Rovers with John McKinven once again proving the scourge of the Rovers defence. The score would have been closer had Slack not missed a penalty in the 88th minute.

In more recent times Rovers scored four times against the Essex team in Bristol. On 25 October 2008, Rickie Lambert had a game to remember even by his standards as he hit four goals. He notched a first half hat-tick with goals in the 10th, 16th and 33rd minute and scored the fourth ten minutes after half-time. There was then something of a scare as Peter Clarke (70 minutes) and Francis Laurent (75 minutes) gave the away team some hope

The following season the situation was almost reversed as Scott Vernon with a 5th minute penalty and Scott Spencer seven minutes later gave the away team an early 2-0 lead. By half time it was 2-2 as Joe Kuffour (34 minutes) and Jeff Hughes (38 minutes) with a penalty brought the game back to life.

Seven minutes into the second-half, Hughes put Rovers in front but within 5 minutes Vernon had his second of the game to bring the scores level again. The game was turned on its head in the 65th minute with a yellow card to Byron Anthony but a red to Francis Moussa. It wasn’t until the last minute of the game before the ten men capitulated as Anthony Grant put the ball past his own keeper, Steve Mildenhall.

On 11 March 2017 Rovers won the game at the Mem 2-0. Billy Bodin cut in from the right and buried a trademark left-footed shot into the opposite corner of the net after just 57 seconds. Then on 31 minutes Rory Gaffney took aim from the right corner of the box and found the net via the inside of the far post with his right foot to double the score.

Last season Rovers went ahead after 15 minutes when Billy Bodin tricked his way past Stephen Hendrie inside the box and buried a left-footed volley from close range. Ellis Harrison made sure of the points with a low 74th-minute finish from the edge of the box after Bodin had set him up.

Liam Sercombe put the icing on the cake four minutes from time, shooting home after Rory Gaffney's drive had been parried by Southend keeper Mark Oxley.

United Boss Powell is looking for his team to put on a much better performance than their visit to Luton, “We must dust ourselves down and go to Bristol. It’s another tough place to go but that’s what League One is all about. Bristol Rovers will be looking to bounce back after losing on Tuesday but we have to have a reaction ourselves.”