Ten-man Rovers punished by a late goal at the Mem.

Gareth Evans' goal midway through the first-half was cancelled out by Lines' penalty in the final forty-five minutes - but Rovers were forced to see out the final stages of the game a man short after goalscorer Lines was dismissed.

There was late drama to come in the game, as Ronan Curtis, who gave away the penalty for Rovers' goal, scored in the closing minutes to provide Portsmouth with the win.

In naming his side of the visit of Portsmouth, Manager Darrell Clarke included two changes to the side that took to the field against Wycombe on Saturday.

Daniel Leadbitter and Kyle Bennett were both recalled to the line-up, as Sam Matthews missed out and Tom Broadbent was named on the bench.

In what was a lively opening five-minute spell, Rovers sprung the first attack of the contest. It was former Portsmouth man, Kyle Bennett that instigated the move, with a smart turn in the centre of the park allowing space for the attacking playmaker to break into the final third - with his eventual pass towards Tom Nichols intercepted by Matt Clarke.

Portsmouth created chances of their own, as a deep cross from the right navigated its way to the unmarked Ronan Curtis, who stroked the ball towards goal only for his effort to be deflected clear by Tom Lockyer.

With the loud atmosphere ringing throughout the Mem, both sides were encouraged to break forward at every given opportunity. A flighted delivery from the right from Ben Thompson had a significant amount of curve that made it tricky to defend, but stretching inside the six-yard box, Tom Lockyer managed to edge the ball behind for a corner and away from Portsmouth's attacking threats. 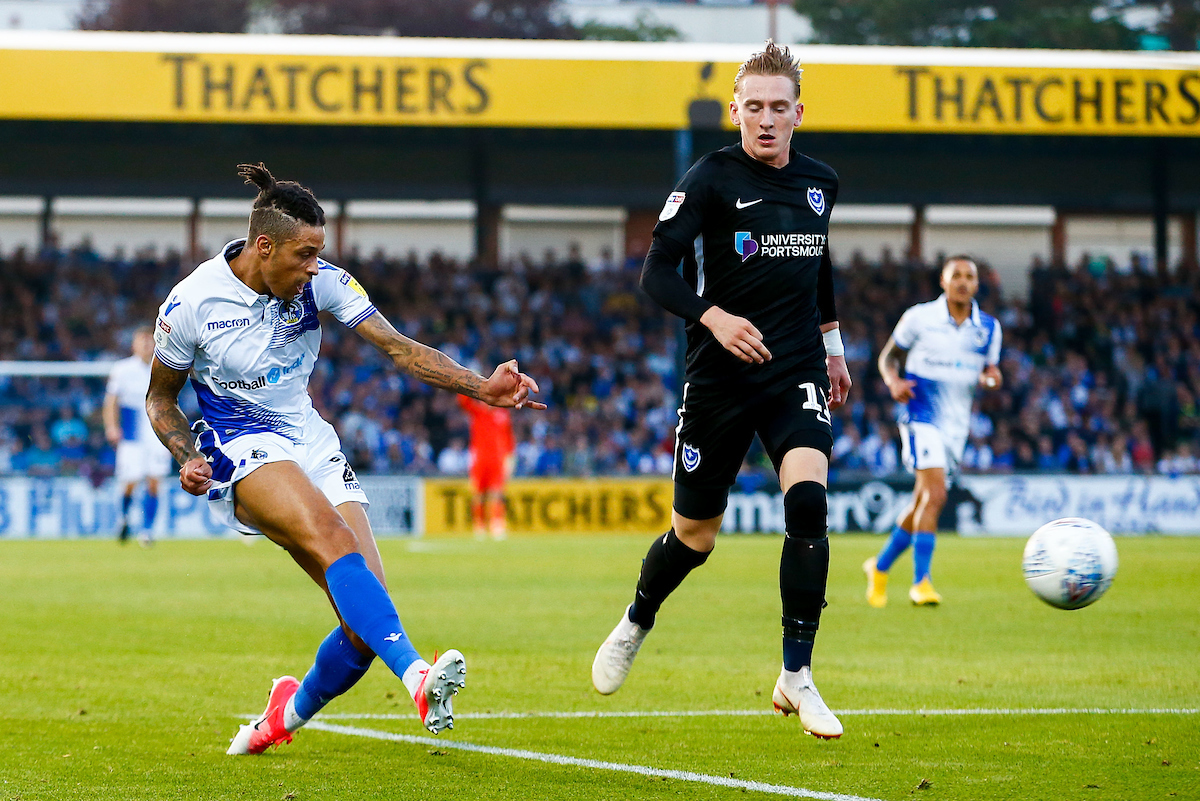 With the twenty-minute mark passing, a slick spell of prolonged possession from Rovers instigated an attack. Tom Nichols combined with Kyle Bennett on the fringes of the area, with Nichols being tripped just outside the box. Ed Upson stood over the set-piece but enlisted a touch too much height on his free-kick and his effort climbed over the target.

Upson's chance signalled a good series of opportunities for Rovers. Kyle Bennett again enjoyed the freedom to roam forward, before picking out the movement of Tom Nichols. The Portsmouth defence stretched, Nichols managed to chip a ball towards the unmarked Liam Sercombe, but with just the 'keeper to beat, the winger sliced his effort over the target.

Against the run of play, Portsmouth took the lead in the contest. A long-ball pumped forward by Craig MacGillivray was flicked on by both Curtis and Hawkins, with the combination of headers seeing the ball find Gareth Evans in the area. The Portsmouth captain waited for the ball to sit and rifled a powerful volley that left Adam Smith little chance to deny the visitors the opening goal.

As the first-half progressed into the later stages, Rovers did create chances to restore balance to the scoreline. Kyle Bennett was again involved, this time laying off a pass to Sercombe to launch a shot towards goal, but the on this occasion Sercombe lifted his effort high. 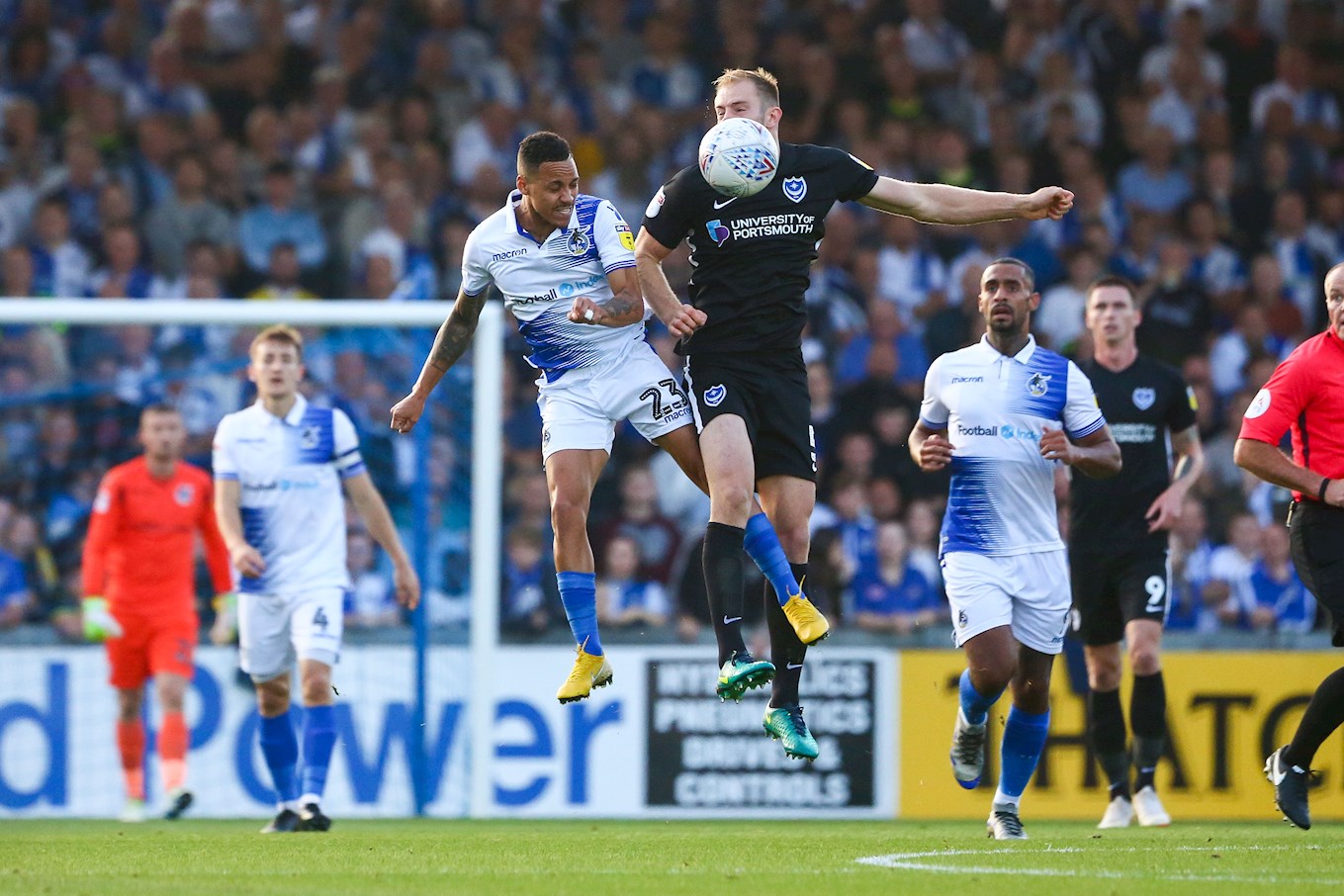 There were more chances to come form Rovers - as Liam Sercombe took sight at goal from thirty-yards with a low-effort that required MacGillivray into making a save down low to push the attempt wide. In first-half stoppage time, Ed Upson recycled a corner from Rovers, directing a left-footed shot from eighteen-yards that looked like it may nestle into the bottom corner, but the effort was deflected away by Tom Naylor, as Portsmouth held onto their advantage into the interval.

Immediately after break, Rovers had to soak up a spell of pressure. A high ball into the Rovers area from a wide left position was well watched by Tom Lockyer, who made an important defensive header to relieve the pressure.

Rovers soon took turn to apply pressure themselves on the Portsmouth goal. A fine sweeping shot from Tom Nichols looked like it may curl into the far corner after the striker cut inside from a wide berth. The shot from Nichols sparked MacGilliviray into making a diving save, with the rebound falling to Liam Sercombe on the follow-up, but rushing his attempt, Sercombe poked the ball wide.

Nichols didn't have to wait long for another opportunity to present itself, as the striker dug out a path to goal from a narrow angle, with the well-struck attempt being tipped behind for a corner by MacGillivray, who couldn't guarantee that ball wouldn't creep inside at the near post.

The series of chances lifted the volume inside the Mem - with Rovers attacking the goal in front of the vocal Thatcher's terrace. A smart ball out wide to Daniel Leadbitter crafted the chance for the right-back to pull back a disguised ball to the feet of Sercombe. Shifting his weight to make a first-time strike at the pass, Sercombe's effort was on target, but blocked by Ben Thompson, with numerous Rovers players appealing for a penalty for handball.

Rovers introduced a doubled change as the final quarter of the game approached - with Alex Jakubiak making his Rovers debut, as the striker was joined by Chris Lines from the bench.

After another promising spell in the game, Rovers did manage to score that all-important equaliser. The move for the goal originated as a corner from the right was handheld in the area by Ronan Curtis - with referee hesitating for a moment before pointing to spot to award the spot-kick. Chris Lines was tasked with taking the penalty and side-footed his attempt home from the spot to bring Rovers back level.

There was a mad moment yet to come, as less than two minutes after experiencing the euphoria of scoring, Lines was sent off for a rash challenge on Pitman, just yards outside the Rovers penalty area.

With a man disadvantage, Rovers still maintained an attacking threat. Substitute Alex Jakubiak formed a lone attack and with a free path to goal managed to force an effort that required a stop from MacGillivray.

There was further drama in the pipeline, as another ball forward by the Portsmouth 'keeper was flicked towards Curtis, who was at fault for the Rovers penalty. The winger held off a challenge and was able to lift a shot over the advancing Adam Smith, with numerous attempts to clear the ball on the line proving to be in vain, as Portsmouth grasped the goal in the closing five minutes.

With time dwindling - there was still one last chance for Rovers to rescue a point. A Rovers corner caused carnage in the area, the ball eventually falling to Kyle Bennett. The winder provided an effort towards goal, only to be denied by an outstanding reaction save from MacGillivray.