Bristol Rovers will be heading up the M4 on Tuesday to Loftus Road, to face Queens Park Rangers for the first time since 1980. Both teams would have hoped for improved starts to their season, with Rovers having just one win from five League games and Rangers with a matching record. Rangers Boss Steve McLaren who took over the reins from Gas hero Ian Holloway has been under early pressure after suffering a 7-1 loss at West Brom and then last week a 3-0 home defeat to our near neighbours.

That pressure was relieved somewhat last weekend when a debut goal for Tomer Hemed, a midweek loan signing from Brighton, struck in the 35th minute lifted them off the foot of the table. McClaren dropped goalkeeper Matt Ingram for former Gas loanee Joe Lumley, who made a superb one-handed save after 15 minutes to keep out Josh Windass, making his first Wigan start.

A defence that shipped 13 goals in four games looked more resilient and McClaren was also delighted with his midfield's work-rate and rightly so. It encapsulated the display of a team fighting for its manager. Hemed struck after Wigan failed to clear a corner. As the ball bounced up in the six-yard box, he swivelled acrobatically and scooped the ball high into the net from six yards.

Speaking after the match McClaren said: “It made a huge difference. We had no money to buy and have been praying for the (transfer) window to end and the loan market to open, because that’s all we can take.”

“This week has been tough, but once they came in on Thursday you could see the belief in the players grow that we are moving forward and making signings. The fight was incredible; the tackles, the blocks the headers. You have to do that in the Championship to get a result.

“Keeping the clean sheet is the first thing and now we also know we have people who can score goals.” McClaren also praised director of football Les Ferdinand and the club’s owners Ruben Gnanalingam and Tony Fernandes for getting the loan deals done.

“We’ve had to show patience but Les Ferdinand opened and the two owners Ruben and Tony Fernandes have worked on Hemed and Nahki for four or five weeks, knocking on the door and making sure they come to this club. So they deserve a lot of credit for that and when they’ve been criticised, it’s not been right.”

Rovers last meeting with Rangers was on 11 November 1980 at Eastville. In a Division Two game Rangers goals by Andy King and Tommy Langley gave Rangers a 2-1 away win with a Stuart Barrowclough penalty being the Rovers response. In the game earlier that season at Loftus Road Rangers won 4-0 with Wayne Feredy (2), Don Shanks and Bob Hazell scoring for the Hoops.

The very first game took place on 12 January 1907 in an FA Cup tie, the first game ended 0-0 in London. Clark scored Rovers winner in the replay.

Jimmy Langley made a fine save on the line with his hands but Dave Stone’s penalty failed to beat Peter Springett in the Rangers goal.

Just before half-time Ray Mabbutt headed in Harold Jarman’s corner to put Rovers back in the game. It was the 63rd minute when Rodney Marsh hooked the ball over his head to restore Rangers two goal lead. 14 minutes later Lazarus completed the scoring after Morgan laid one on a plate for the high riding Londoners. 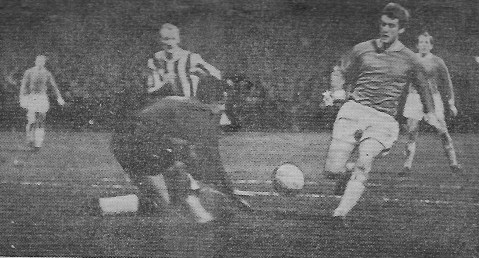 Four days later the teams met in Bristol but this time it was Rovers who ended up winning the game. Rovers owed much to keeper Hall who made brave saves from both Marsh and Morgan. Rovers goal came in the 40th minute as Johnny Brown lifted his right foot chest high and hooked the ball past Springett in Rangers goal.

Rovers’ last victory over Rangers was on 2 November 1971 on a 4th Round League Cup replay with Sandy Allan scoring the winner in front of a packed 24,373 Eastville crowd. Harold Jarman had scored Rovers goal in London in the 1-1 draw. There have been 64 games between the teams over the years with a remarkably even outcome, 25 Rovers wins, 13 draws and 26 Rangers wins.

On Saturday ex-Gas loan keeper Joe Lumley was a delighted to keep a clean sheet, “That’s my first ever clean sheet in the league for QPR. It was an unbelievable feeling at full-time. The fans really supported us today, for the full 90 minutes and that really helped.”

“It was a great result. The boys were a different class today, especially the back four who dug in deep at the end. They had a lot of free-kicks late on so we had to defend well but now we have points on the board and we can get going.”

“It’s good to be back in the team but now I have to keep proving to the staff what I can do,” said Joe. Matty (Ingram) could only do what he has done. He’s a top guy but only one keeper can play but hopefully, I can keep the shirt now. I know Matty will be training hard each day and pushing me but I’m delighted to be playing.”

Talking about new laonees Tomer Hemed and Nahki Wells he is positive about their influence they have had on the club, “They are both great lads and have given us a lift. Tomer has his debut goal and Nahki was class as well. That’s going to give us some belief and hopefully, we can keep going now and maintain some confidence.”