An extra-time goal from Bright Enobakhare defeats Rovers at Molineux following a tenacious performance from Darrell Clarke's side.

In an even first half, chances from Tom Nichols and Liam Sercombe built momentum for the visitors, who were backed by a vocal array of travelling supporters at Molineux and settled into the game as the first-half progressed.

A fine reaction save from Sam Slocombe kept the scores level at the start of the second period, as the Rovers goalkeeper made a diving save to deny Bright Enbakhare from converting a close-range volley, as Rovers struck the post via a left-footed effort from Marc Bola.

Wolves had to rely on their bench in the second half, introducing regular first-team members Barry Douglas and Ivan Cavalerio and tested Slocombe again in the final minutes, as the ninety minutes ended with the scoreline intact.

Bright Enobakhare grabbed the only goal of the game in the first-half of extra-time, as Rovers were reduced to ten men late on due to a red card to captain Tom Lockyer.

Manager Darrell Clarke opted to make two changes to the side that fell to defeat at Wigan on Saturday. Into the starting eleven came Tom Broadbent and Tom Nichols, as Broadbent replaced the suspended Ryan Sweeney and Nichols was chosen ahead of Rory Gaffney.

The hosts eclipsed Rovers two changes and in turn made eight alterations to the side that defeated Nottingham Forest on the weekend, with the headline being the full debut of Danish U19 international Oskar Buur Rasmussen, as former Rovers academy striker Donovan Wilson was named on the bench.

In the early stages, the hosts looked to impose themselves on the game and enjoyed a prolonged period of possession inside the Rovers final third. An inswinging corner from the left by Ben Marshall caused Rovers a slight issue, as goalkeeper Sam Slocombe couldn't claim the ball due to the congested six-yard area. Fortunately for the visitors, the delivery sailed harmlessly across the penalty area, with the ball evading the numerous Wolves players inside the box.

Marshall's corner was quickly followed by a scramble inside the Rovers area following a pass from Bright Enobakhare, with the loose ball being picked up by Michael Zyro, who took a touch before clearing a path on goal, only to see his shot blocked by an acrobatic lunge from Chris Lines, who was quick to pounce on the danger.

The hosts continued to pose a threat and constructed the best chance of the opening stages with a clearance upfield from Ben Marshall finding Michael Zyro, who was able to take the ball down and launch a left-footed effort that crept over the bar from the edge of the box. Zyro had a further chance just moments later, as a driven pass across the face of goal from Sylvain Deslandes found the striker at the near post, but opting to direct a first-time effort towards goal Zyro's effort ballooned over the crossbar.

As the game progressed it was Marshall's delivery into the Rovers area that provided a constant outlet for Wolves, as the midfielder swung a corner from the left that found captain Danny Batth, who leapt to meet the set-piece but was unable to keep his header on target.

After withstanding the early pressure from the Championship outfit, a well-constructed Rovers move forged the first opportunity of the game for Darrell Clarke's men. Following a series of patient passes among the back-four, an inch-perfect delivery from Tom Lockyer found Billy Bodin, who in turn was able to control the pass and pick out Tom Nichols. With a neat change of direction, Nichols was able to break into the area and open up a shooting opportunity, but his eventual shot took a heavy deflection that diverted the ball over the crossbar. 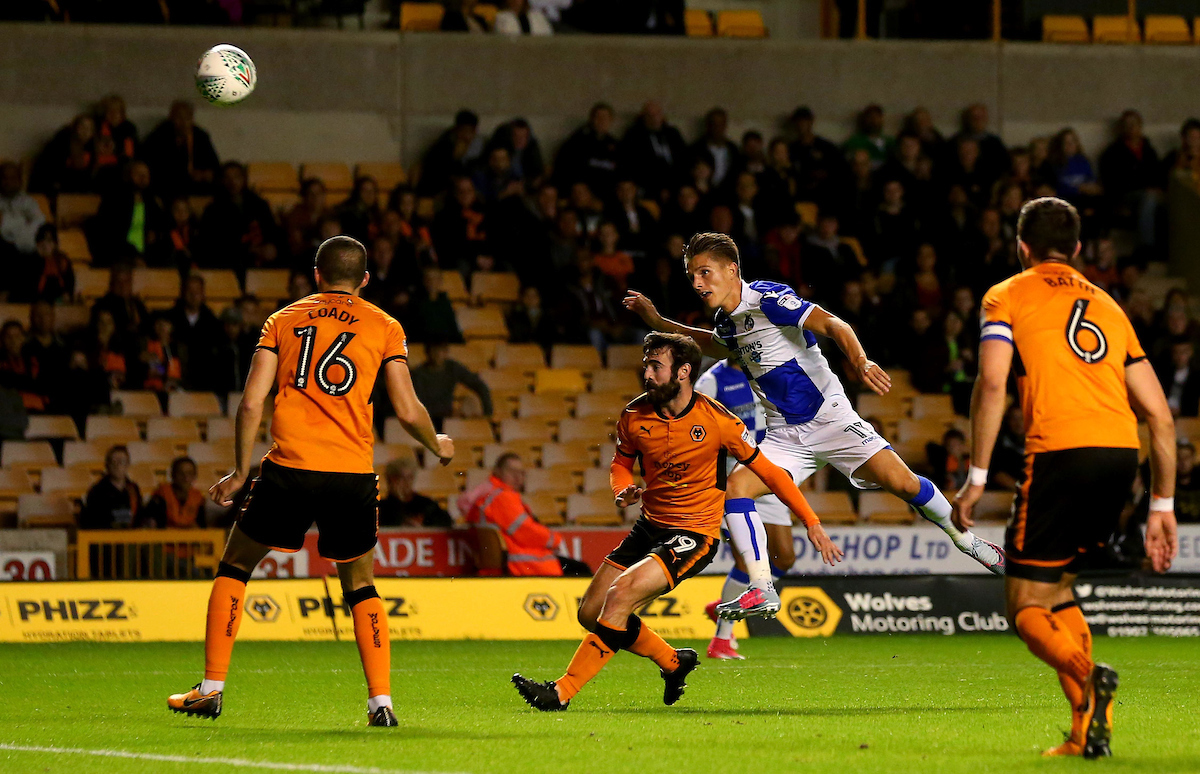 Nichols' chance was quickly proceeded by another flowing move by Rovers, as a long-ball forward was acutely played into the feet of striker Ellis Harrison, who had found a pocket of space in between the two Wolves centre-backs. Harrison, who had scored in either round before tonight's tie, waited for the ball to drop before attempting a volley with the outside of his foot that was deflected away from the target, but the strong-travelling contingent of Rovers supporters sounded their appreciation for the move, as Rovers continued to show signs of growing into the game. 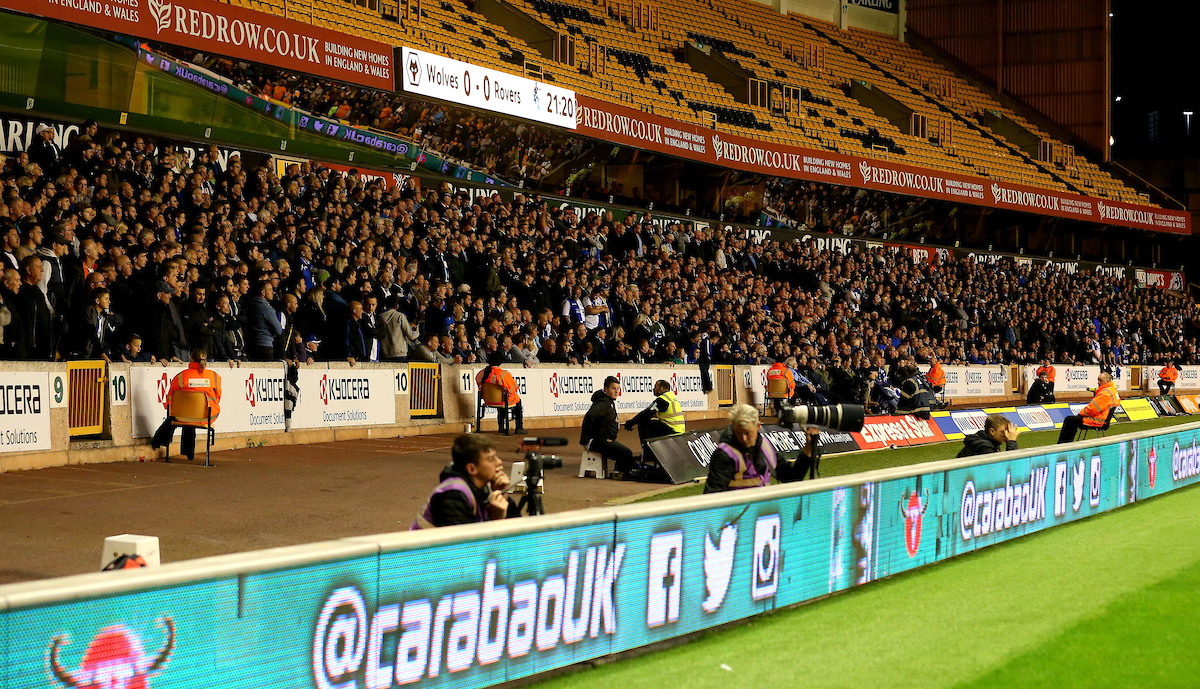 With half-time approaching, Harrison turned provider for Tom Nichols to try his luck from range, as a delightful flick from the striker deflected a ball over the top from Chris Lines into the path of Nichols. The forward used the space created by Harrison to look up and plot a route to goal from the edge of the area, but using his right foot the striker couldn't get the swerve on is shot to bring it back on target and his chance flew wide of the post.

Minutes before the half-time whistle, Rovers threatened to break the deadlock as a backheel flick from Bodin stretched the Wolves defence and resulted in a concealed pass to Liam Sercombe. The midfielder received the ball with his back to goal and was able to turn to run purposely into the box before lining up a driven effort that had to be pushed around the post by Wolves 'keeper Will Norris. 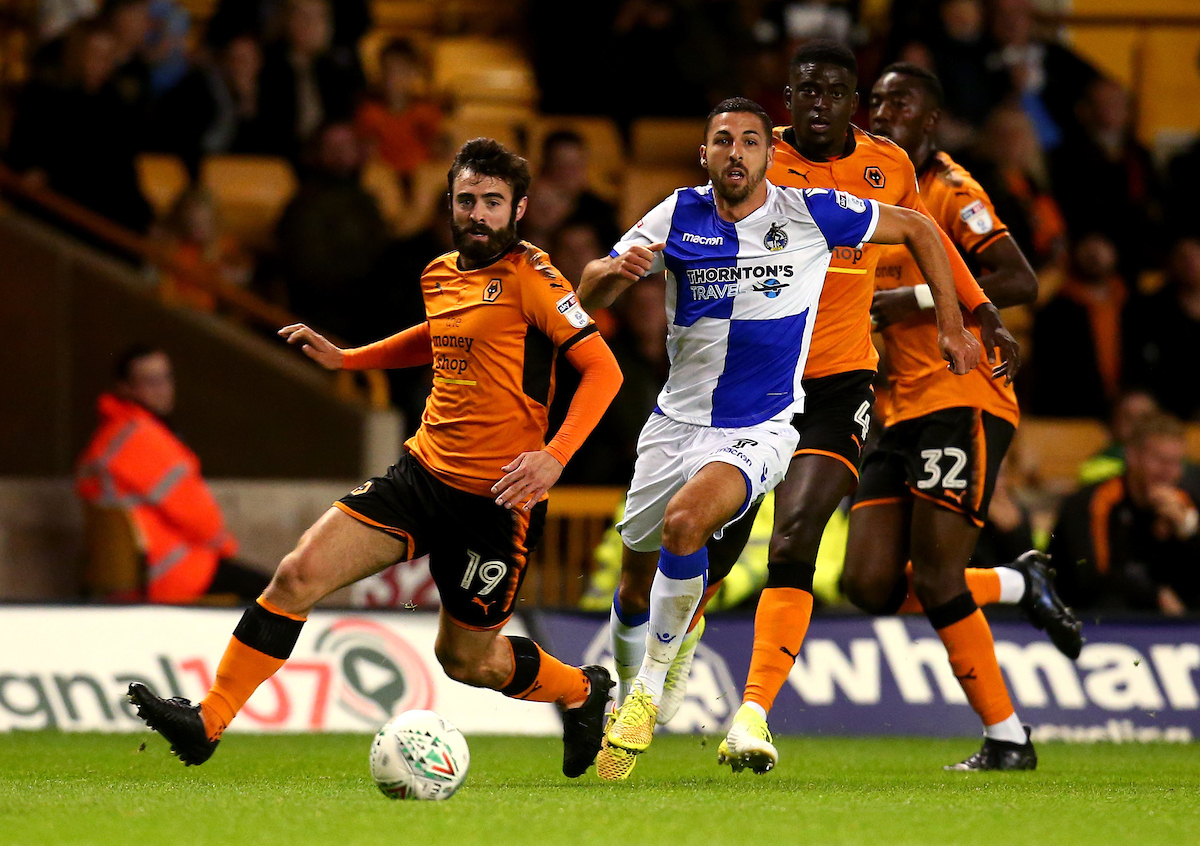 Following the interval, Ellis Harrison continued to be lively as the striker forged a break down the left following a through ball from Marc Bola. The striker drew in a number of defenders before producing a driven cross into the area that had to be deflected away.

Wolves responded by mounting their best chance of the game on the fifty-minute mark, as a searching cross from the right was misjudged by Daniel Leadbitter, who saw the ball fly over his head towards Bright Enobakhare, who was hand to fire a first-time volley towards goal that was touched over the bar by a stunning save by Sam Slocombe.

Chances were harder to come by in the second half, but it was Rovers who looked to break quickly once in possession. A sweeping series of passes allowed Rovers to break down the right, as Daniel Leadbitter broke into full stride to get beyond the Wolves defence, before laying off a pass to Billy Bodin. The forward took a touch and whipped a left-footed effort goalwards that was held by 'keeper Will Norris.

Bodin's chance signalled a good spell for Rovers, who came inches away from securing the opening goal on the seventy-minute mark, as the ball broke down the left to the advancing Marc Bola. Bola managed to change the direction of his run when receiving the ball and had eyes only for goal and connected cleanly with a left-footed shot that took a faint touch from Will Norris which turned out to be enough to deflect the defender's effort onto the post. 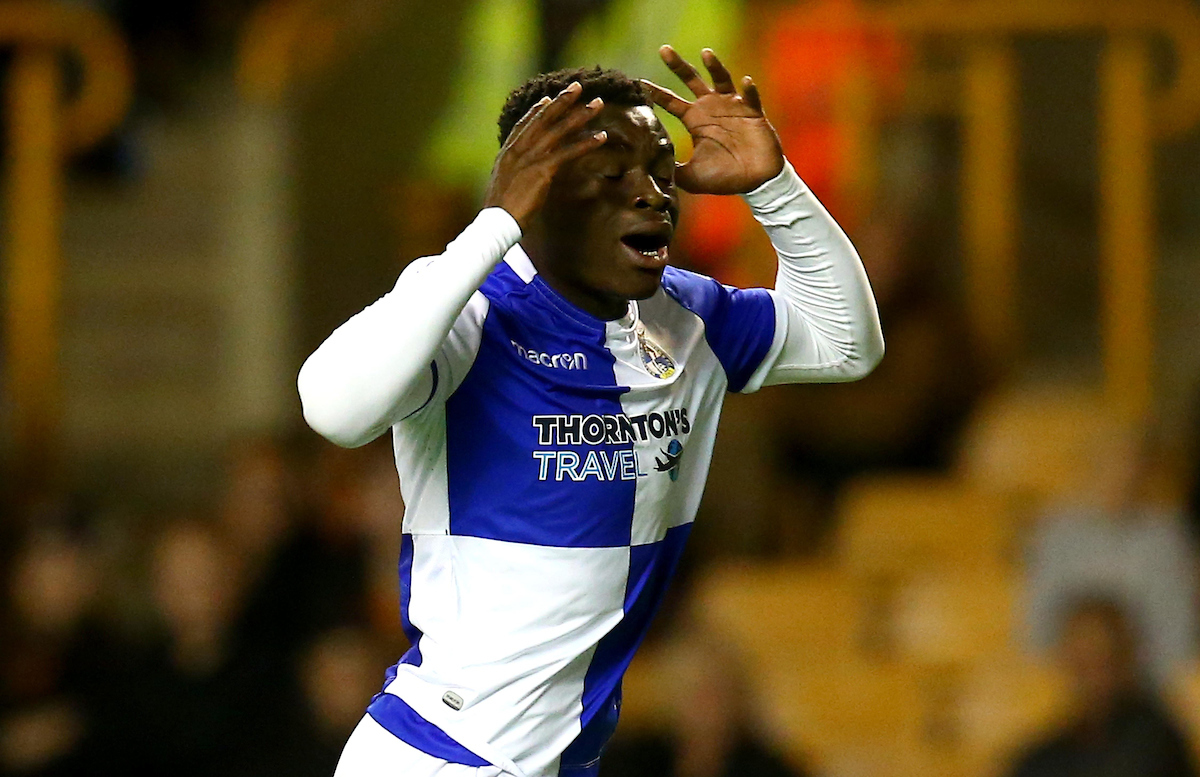 Rovers continued to apply pressure to break the deadlock and were awarded a free-kick in a threatening position following a mistimed challenge on Billy Bodin. Numerous Rovers players stood over the set-piece, but it was Tom Nichols who launched an effort towards goal, as the striker managed to get his shot over the wall, but couldn't add further pace on his effort to test Norris who claimed the ball comfortably.

As the game entered the final ten minutes, Rovers had to call upon Sam Slocombe once more to keep the tie level. Substitute Ivan Cavalerio was able to break into the Rovers area to fire a driven shot towards goal, but Slocombe was equal to the effort and made a diving save to block Cavalerio's shot. There was a late scare for Rovers as looping header from Danny Batth looked like it may just creep into the far corner, but as Slocombe was tracking back towards the far-post the defender's header bounced cleanly back off the crossbar, as the game headed towards extra-time. 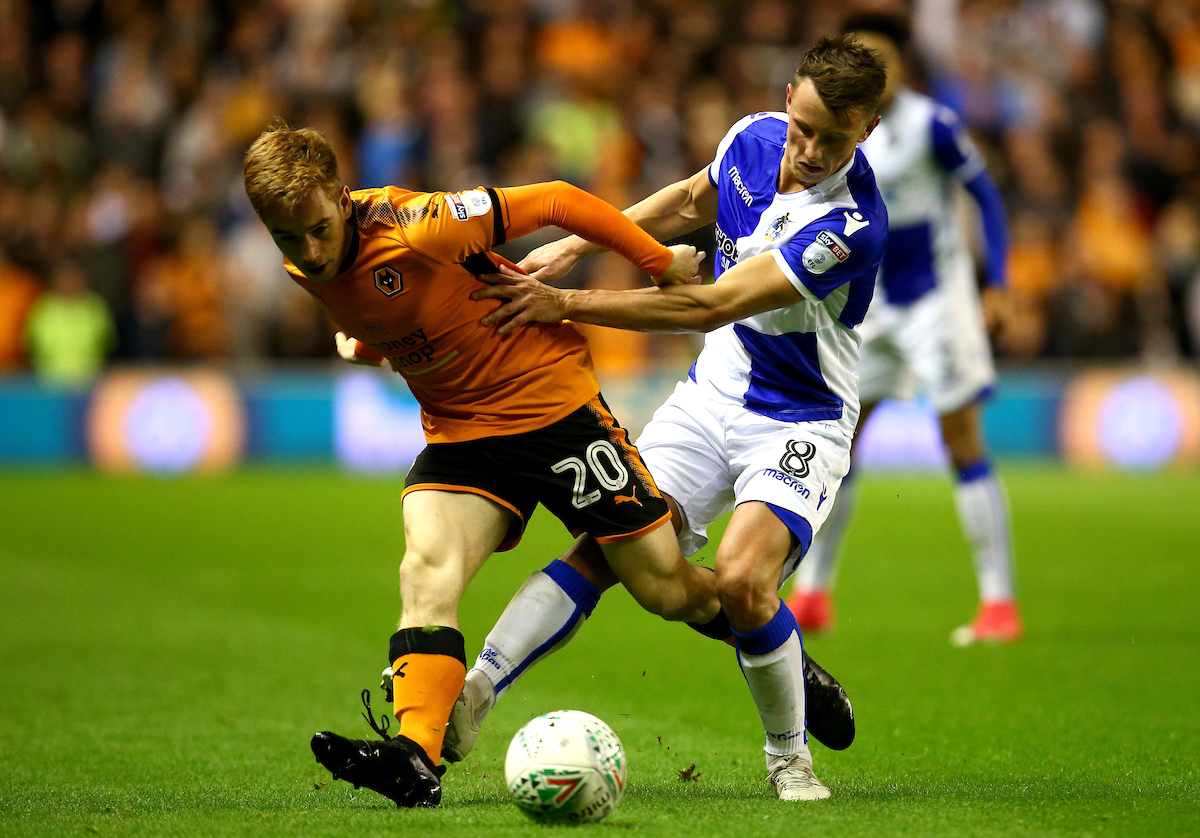 In the opening minutes of extra-time Rovers suffered a blow as the energetic Daniel Leadbitter sustained an injury and had to be replaced, with Joe Partington chosen as a like for like change for the defender.

There was further bad news for Rovers as the deadlock was broken by the hosts in the 98th minute, as endeavour down the left from Wolves allowed Barry Douglas to take aim and lay off a pass across the face of goal to Bright Enbakhare, who made no mistake in hitting the target with a powerful effort that left Slocombe little chance of making a save. 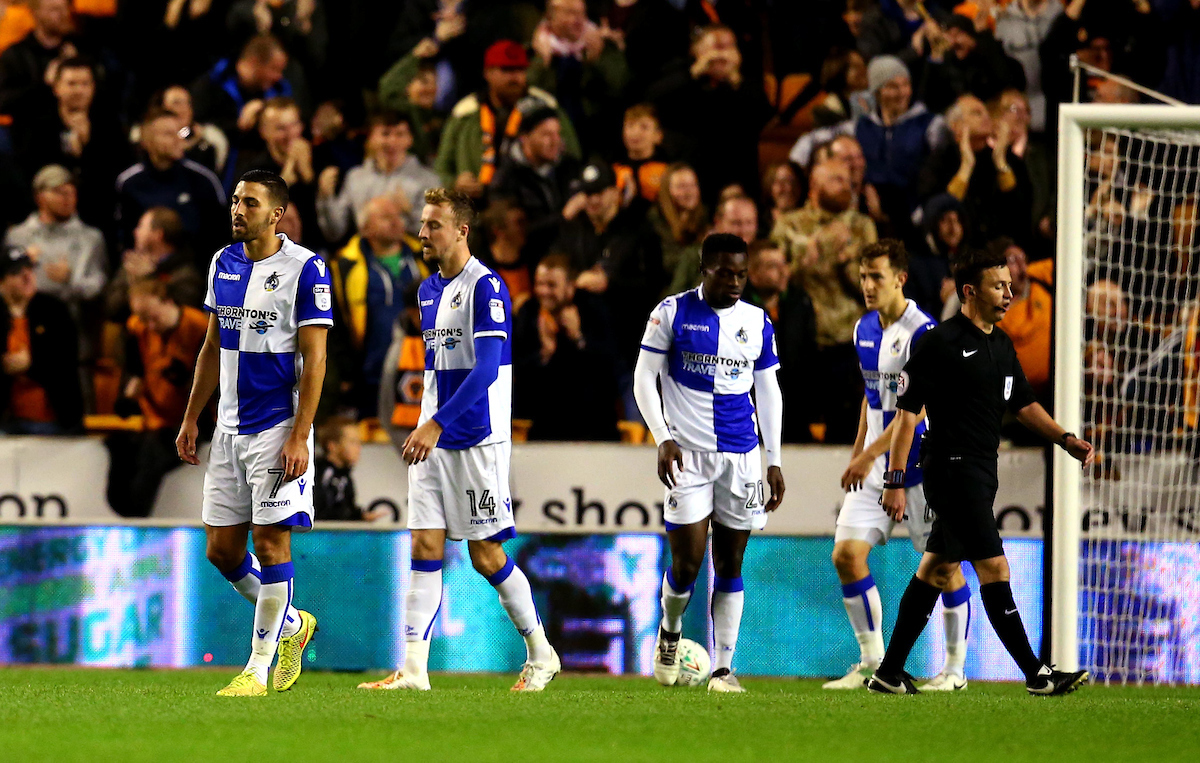 After going a goal down Rovers responded full of fight and almost registered an equaliser immediately after Enbakhare's strike. Substitute Dom Telford broke into the box undetected and was able to latch onto a piercing through ball. The striker let the ball run across his body before apply a chipped finish that deflected off the crossbar and back into the ground, inches away from scurrying over the line. Telford's chance was quickly followed by a close-range header from Rory Gaffney, but under pressure from a number of Wolves defenders the striker didn't connect cleanly with his effort and the ball bounced wide of the post.

It was Gaffney who forged an opening for himself just before half-time in extra-time, with a powerful right-footed shot from the forward hitting the target, but Will Norris was on hand to stand tall to make the save.

There were two golden chances for Rovers to score a dramatic late equaliser, as the second half of extra-time reached its conclusion. Urged by the travelling fans, Liam Sercombe tested the Wolves goal from range and was very nearly rewarded for his effort, but a fine save from Will Norris just did enough to push Sercombe's shot over the crossbar. The effort from range was quickly proceeded by an inviting cross from Gaffney that glided into the path of Dom Telford. The striker timed a jump to perfection to meet the cross but saw his glancing header drop just the wrong side of the post.

Captain Tom Lockyer was shown a late red card for a pulling down Donovan Wilson, who was clean through on the Rovers goal, as Wolves protected their narrow lead until the final whistle.