With a week's break in their Central League calendar, the friendly against Weston Super Mare provided Chris Hargreaves' squad with a competitive outing on a blustery evening at the GFA.

Rovers found themselves behind at the break, as Jarrad Welch crafted a free-kick into the net just before the break, but Rovers responded in the second half, as Rhys Kavanagh's brace and a superb strike from defender Lewis Ludford-Ison capped off a well-deserved victory, as a late goal from Luke Russe added to an encouraging performance. 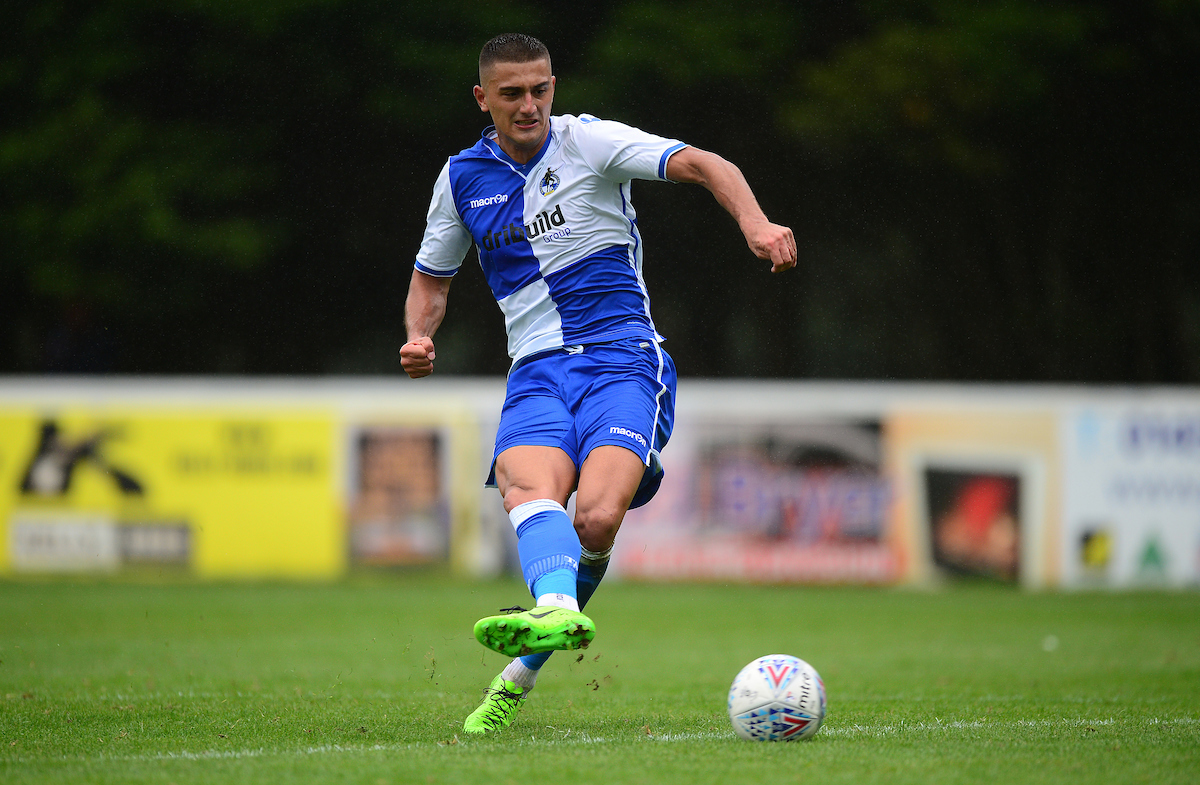 Less than twenty-four hours after making his first-team debut at Fratton Park, Kenan Dunwald was included in the starting line-up for the encounter at the GFA, as the striker led an attacking Rovers line-up that included Rhys Kavanagh and Mo Bhagdadi.

There was encouraging signs for Alfie Kilgour, who started the fixture following his appearance from the bench in the Central League Cup against Cheltenham, as the young defender was paired with Lewis Ludford-Ison is the heart of the Rovers defence.

Cameron Ebbutt, who scored a hat-trick for Yate Town on Tuesday evening at Taunton wasn't included, neither was Lewis Leigh-Gilchrist, who is also on loan at Lodge Road.

In the opening twenty minutes, both sides struggled to create chances on goal. Kenan Dunwald's physicality appeared to cause the Weston defence problems early on, but the striker couldn't take advantage from the promising positions he was finding himself in.

Rovers went close from a set-piece, as an inviting delivery into the box was headed narrowly over the crossbar by Alfie Kilgour, as the defender rose well to meet the delivery. Conor Jones quickly followed Kilgour's chance with a well-weighted free-kick into the box that was headed forcefully into the ground by Lewis Ludford-Ison, who saw his bullet header bounce narrowly wide of the goal with the goalkeeper seemingly beaten.

The deadlock was broken with under fifteen minutes remaining in the first half as a counter break from Weston left Rovers exposed at the back. Alfie Kilgour was drawn into making a challenge that was fractionally late on the fringes of the Rovers area, which was punished by just a free-kick. Jarrad Welch was tasked with taking the set piece and curled his shot over and around the wall, beating the diving Alexis Andre-Jr, who could have done little to prevent the shot due to the pace in which it was struck.

Substitute Spruce was immediately involved, as a quick break from Rovers saw Cameron Hargreaves burst with the ball at his feet to the edge of the Weston area. The midfielder had the chance to look up and slide a pass through to James Spruce but on the slippery surface the ball ran through for the Weston 'keeper to claim.

Rovers didn't have to wait long for the equaliser, which came inside the first five minutes of the second half, with a long-range effort from striker Rhys Kavanagh. The forward dropped slightly deeper to pick up possession, but with time and space to look up to goal, the Welsh forward connected well with a right-footed effort that flew into the bottom corner on the net, as Rovers pulled the game back level.

It was another goal from outside the box that allowed Rovers to go ahead in the contest, with defender Lewis Ludford-Ison providing the long-range finish on this occasion. The defender waited patiently for the ball to fall to him, before striking a driven effort that was directed perfectly for the ball to nestle inside the post.

The defender's goal was quickly followed by a further goal from striker Rhys Kavanagh, as Rovers scored twice in just over three minutes. The striker was again allowed space outside the box and from an identical spot to where his first goal was scored, the striker was able to carve a side-footed finish to the opposite corner that just swerved enough through the air to squeeze between the 'keeper and the post.

Inside the final ten minutes, Weston reduced the deficit as Irnti Rapai broke in behind the Rovers defence and powered home volley from close-range, but Rovers two-goal cushion was restored moments later, as Luke Russe was in the right place to convert from a James Spruce cross to cap off a rewarding night for the development squad.

Next up for the development squad is a Central League fixture against Southend United.