Rovers defeated on the road at Fratton Park

After an equal first-half, the hosts took the lead in the minutes leading up to the half-time break through an Oliver Hawkins header. The striker's effort was originally ruled out by the linesman, only for the decision to be overturned by the referee.

As Rovers committed more men forward in the second half, Portsmouth striker Brett Pitman punished the visitors, scoring twice in eight minutes as the hosts picked up all three points. 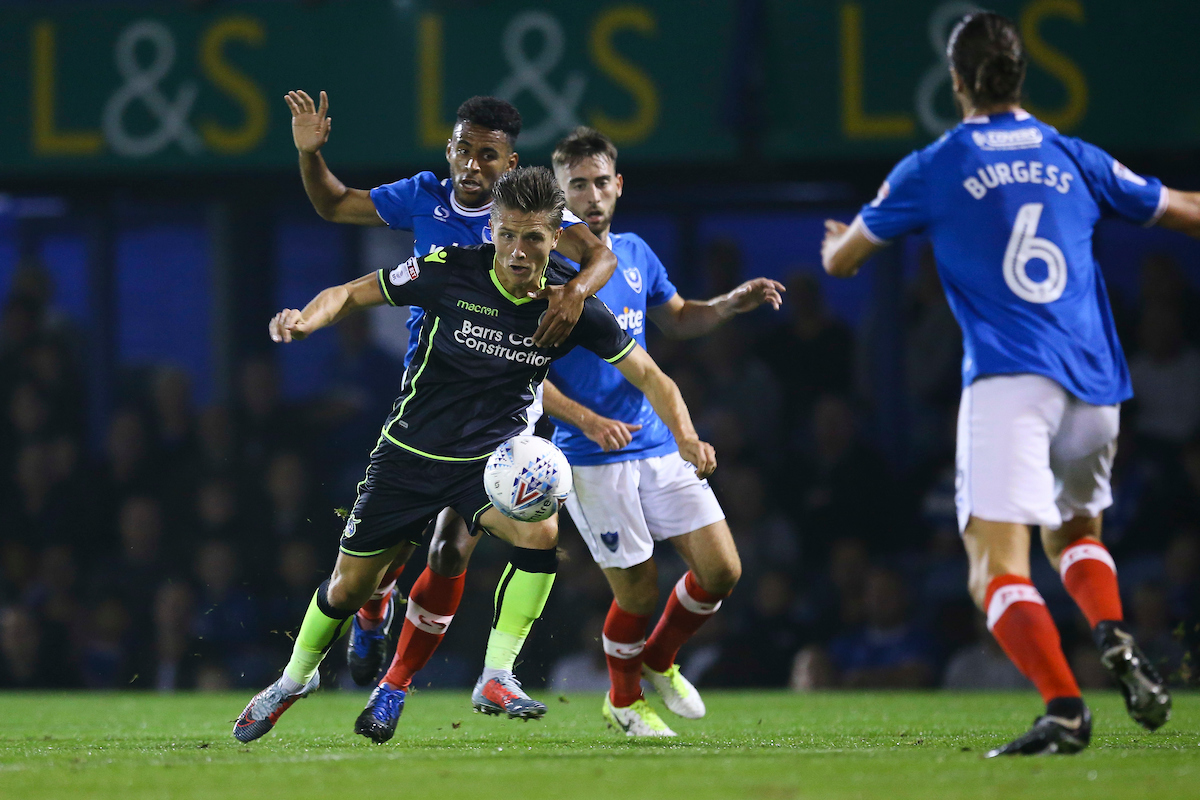 In the build-up to the encounter, Rovers Manager Darrell Clarke made three of changes to the side that started Saturday's victory over Blackpool.

Tom Lockyer returned from his one-game suspension to once again lead the side at Fratton Park, as both Ryan Sweeney and Liam Sercombe were restored to the starting eleven following their appearances at half-time substitutes on Saturday.

On the bench, the main headline was the inclusion of development squad striker Kenan Dunwald, who made the matchday squad in the EFL for the first-time following his singular appearance on the bench in our Checkatrade Trophy encounter against Wycombe Wanderers. 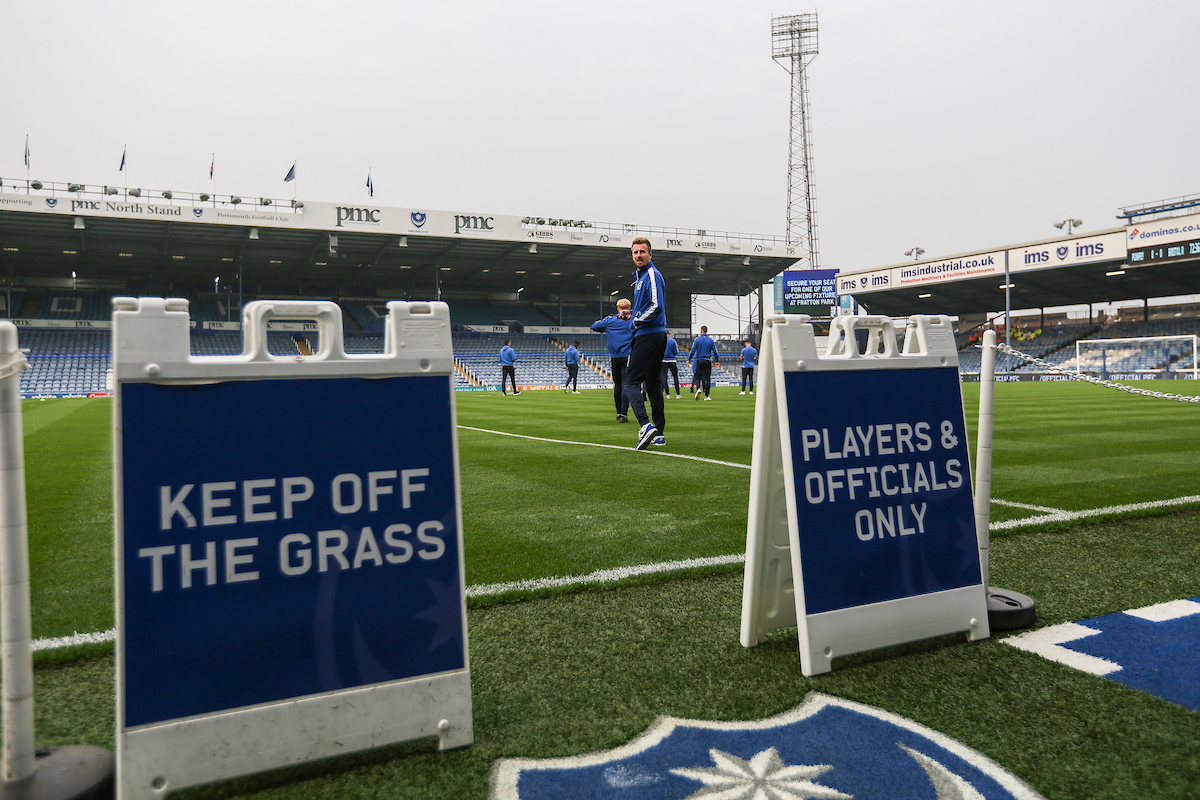 The hosts named an unchanged side to the side that was defeated at Scunthorpe on Saturday. Top scorer Brett Pitman was an injury concern in the build-up to the match but recovered in time to be included in Kenny Jackett's starting XI.

In the opening exchanges, Rovers looked to impose themselves early on in the game and set up with an attacking outlook. Ellis Harrison saw his well-struck shot deflected away from goal, as a teasing ball into a dangerous position from wide out right from Joe Partington narrowly missed Billy Bodin inside the box, with both opportunities coming inside the opening five minutes. 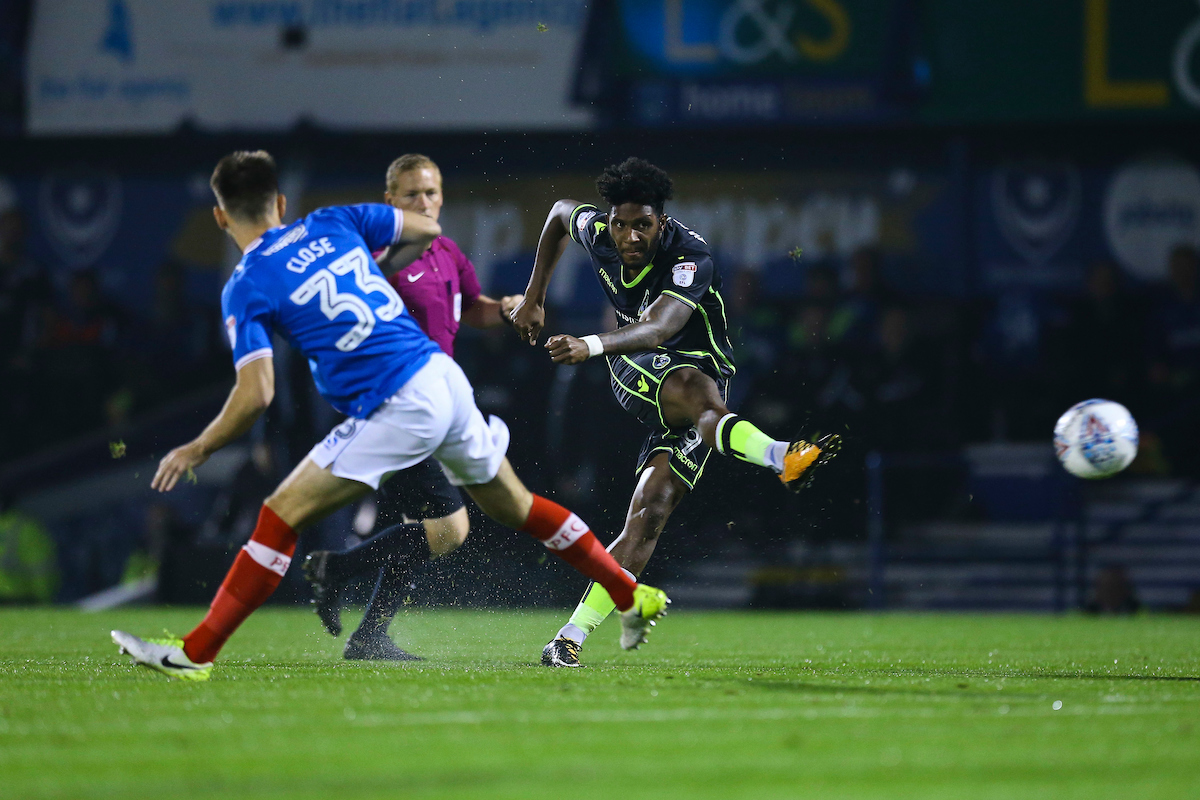 At the other end, Rovers had to be alert to the home side breaking down either wing. Loanee Stuart O'Keefe took advance of an advanced position down the right to deliver a cross into the area that hung in the area and had Sam Slocombe backtracking towards goal, but keeping his eyes on the ball the Rovers goalkeeper was able to claim the ball ahead of the numerous bodies inside six-yard area.

Tom Nichols was presented with a chance on goal soon after, as the striker timed a run to beat the offside trap and found himself in a one-on-one situation with goalkeeper Luke McGee. The forward advanced into the area and set himself to fire a finish across goal and into the far corner, but in doing so the striker took one too many touches and the scrambling Portsmouth defence was able to win possession off the front man, with Cristian Burgess making the recovery challenge.

Jamal Lowe proved to be an outlet of most of Portsmouth's attacking play in the opening twenty minutes and the former Barnet winger saw two dangerous crosses go unpunished inside the Rovers area, as both deliveries pierced the Rovers defence and only needed the slightest touches at the far post to deflect the ball into the goal, in what was a real let-off for Rovers. 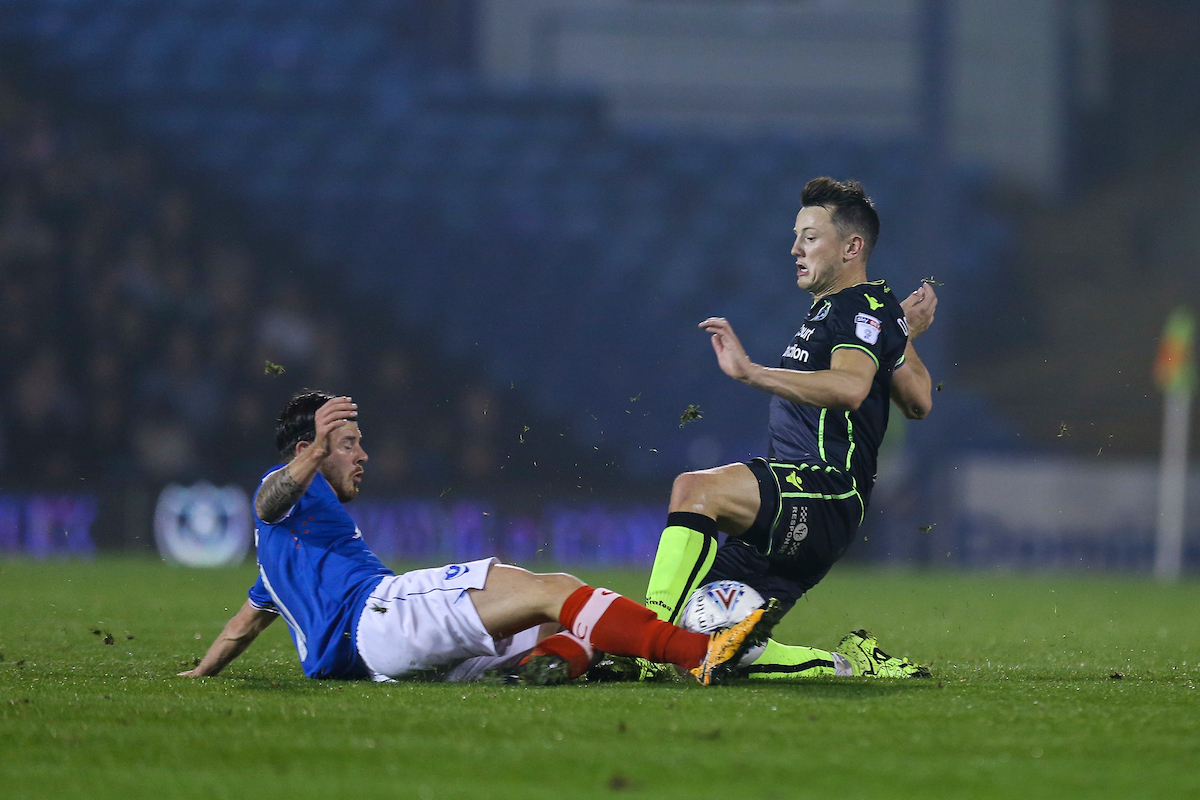 The last time Rovers defeated Portsmouth Ollie Clarke was among the scorers and the midfielder almost opened the scoring shortly after the twenty-minute mark. A low cross from Marc Bola took a number of deflections, as Billy Bodin hurried a shot towards goal that was blocked, with the rebound falling to Ollie Clarke. The midfielder set himself and waited for the ball to drop and hit a volley goalwards that was blocked by Cristian Burgess, who threw himself in front of Clarke's effort.

Rovers enjoyed the fair share of possession in the closing stages of the first half, with both Marc Bola and Joe Partington enjoying the freedom to advance down the flanks. While Rovers enjoyed a higher percentage of the ball, chances were hard to come by. Liam Sercombe took advantage of a loose ball on the edge of the area and took many by surprise by firing a snapshot volley that bounced straight into the grateful hands of McGee in the Portsmouth goal.

With minutes first-half remaining, Portsmouth broke the deadlock in somewhat bizarre circumstances. A corner into the Rovers area was eventually headed home by Oliver Hawkins, only for the linesman's flag to be quickly raised for offside. After much deliberation between the officials, the referee signalled for Hawkins' to stand, as the hosts took the lead just before the half-time interval. 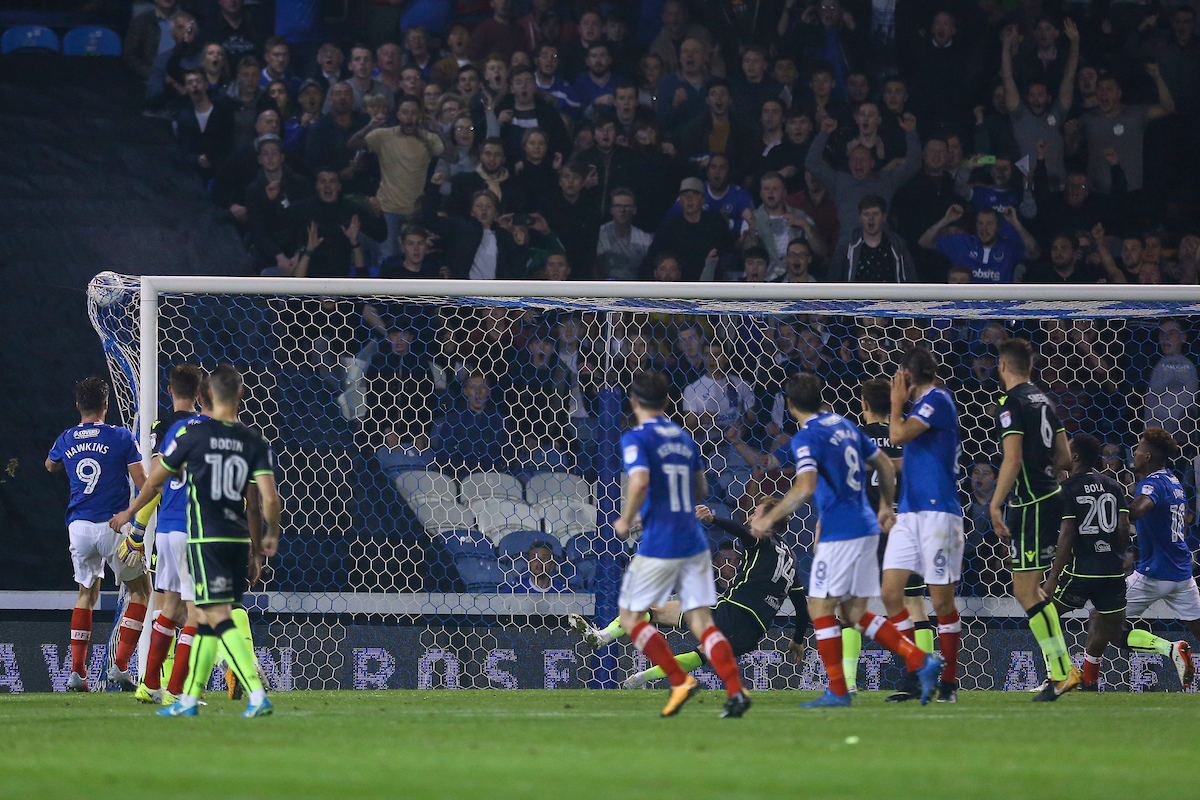 Early on in the second half a Chris Lines free-kick was floated into the area and met by Ryan Sweeney. The defender timed a leap to get good purchase on a header, but his effort lacked direction and was safely gathered by McGee, who didn't have to move to claim the defender's effort.

As the hour past the home side enjoyed a prolonged period camped inside the Rovers final third. A winding run from Brett Pitman saw the striker skip past numerous challenges on the touchline before prodding a ball across goal that was rushed clear by Ryan Sweeney, with the Rovers defence having to stand strong to a number of threatening aerial deliveries into the area.

Rovers looked to hit the hosts on the counter and introduced Dom Telford from the bench to aid in the search for an equalising goal.  The substitutes first action was to play a first-time ball through to Billy Bodin, which saw the forward break into the box and check his run before a well-timed sliding challenge from Nathan Thompson robbed the striker of possession just as he was shaping up to shoot.

Portsmouth managed to add to their lead with a little over ten minutes remaining, as Brett Pitman latched onto a searching cross from Matty Kennedy, with the striker glancing a header past Sam Slocombe.

Off the bench, Rovers rolled the dice and made a double change in response to the goal, as Kenan Dunwald and Lee Brown were introduced.

Inside the final ten minutes, Pitman added his second of the game and Portsmouth's third, as the striker turned Tom Lockyer on the edge of the area and provided a neat finish that directed the ball past the onrushing Sam Slocombe, as the hosts claimed all three points.